Interview with the CNS

Sub Title : The views of the CNS in a forthright exchange on the occasion of the Navy Day 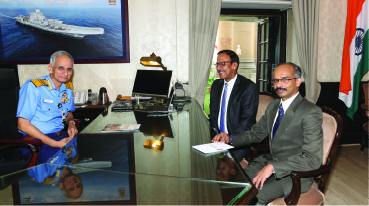 He was commissioned into the Navy in July 1980 and earned his wings as a helicopter pilot in 1982. During his long and distinguished service spanning nearly 39 years, Admiral Karambir has served in a variety of Command, Staff and Instructional appointments. He is the most senior naval aviator and first helicopter pilot of the Navy to become CNS. He went on to command many frontline Navy warships like Indian Coast Guard Ship Chandbibi, Missile Corvette INS Vijaydurg and two Guided Missile Destroyers INS Rana and INS Delhi. He held various important appointments in the Navy including Flag Officer Commanding Maharashtra & Gujarat Naval Area, Director-General of Project Seabird, Deputy Chief & Vice-Chief of Naval Staff. Prior to taking over as Chief of the Naval Staff, Admiral Karambir has been the  Flag Officer Commanding  in Chief  of  Eastern Naval Command.

An alumnus of National Defence Academy, Admiral Karambir is a graduate of the Defence Services Staff College, Wellington; College of Naval Warfare, Mumbai and has served as Directing Staff in both these institutions.

Defstrat. What are the major challenges, especially with regard to modernization and indigenisation plans, that face the Indian Navy moving into the new decade? How do we plan to overcome these challenges?

CNS. The modernisation of Indian Navy is an ongoing process, which is being undertaken in accordance with the Long Term Integrated Perspective Plan (LTIPP). The ongoing modernisation aims to create capabilities for accomplishing a range of missions across the entire spectrum of threats and challenges.

Whilst the Navy’s modernisation programme is continuing apace, there have been certain delays in induction of submarines, multi-role and utility helicopters, minesweepers and amphibious ships. However, the Government is aware of the issues and steps are being taken to ensure that capability shortfalls are overcome at the earliest. 50 ships and submarines are presently under construction, with 48 of them being constructed in various Indian shipyards. Acceptance of Necessity (AoN) has been accorded for 41 ships and six submarines. All these platforms will replace the existing old ships/ submarines and will also augment our force levels.

The delivery of four additional P8I Maritime Reconnaissance Aircraft is scheduled by 2021. Indian Navy has also contracted HAL for 12 Dorniers, 16 ALH and eight Chetak. Further, Acceptance of Necessity has also been accorded for procurement of 10 KM 31 Helicopters, 24 Multi Role Helicopters through Foreign Military Sales from US Govt. and 111 Naval Utility Helicopters under the Strategic Partnership Model. We are also looking to procure additional P 8I aircraft and HALE RPAs to augment our surveillance capabilities.

The Indian Navy holds a mix of weapons, sensors and equipment of varied vintage. Modernisation of existing weapons/ sensors/ equipment and procurement of new weapons and systems is an ongoing process. The obsolescence management and capability enhancement is achieved through Mid Life Upgrade (MLU), wherein vintage weapons and sensors/equipment are upgraded through requisite modifications/replaced with more contemporary systems. In addition, procurement of new weapons/ sensors/ equipment including several indigenous cases under the ‘Make in India’ initiative have contributed towards efforts to maintain the ideal mix of state-of-art, contemporary and vintage weapon/ equipment/ sensors.

The Indian Navy’s drive for indigenisation over the last few years has resulted in achieving high levels of indigenisation, with ‘Self Reliance in Defence Production’ as top priority for the Service. The Navy is certain that with the close involvement of all stakeholders and adequate financial support, the quest for Self Reliance will be realised in the near future.

Defstrat. The Navy has a well thought out Maritime Capability Perspective Plan. However, this plan is largely focused on enhancing conventional capabilities. With rapid technological advances taking place in the field of disruptive technologies like AI et al, which will change the face of warfare, it is important that such technologies are incorporated in our systems. Is the Indian Navy looking at this aspect?

CNS. The incorporation of AI into our weapons and sensors is being undertaken in accordance with the ‘IN – AI Roadmap’. Several projects are being progressed by Indian Navy through PSUs and Industry. The Proof of Concept of AI projects in the field of Predictive Maintenance, Information retrieval, Database Management etc. are in advanced stages of implementation.

The Indian Navy envisages leveraging AI to enhance the combat edge by imbibing it in operations, maintenance as well as logistics, and further into support verticals, such as physical security, medical diagnostics etc.

Defstrat. Recent developments in the sub-continent have ratcheted up tensions between us and Pakistan. Media reports have mentioned sea borne terror threats. What is our capability with regard to detecting and neutralising these threats, which can manifest by way of lone wolf attacks also and therefore be difficult to pick up?

CNS. In terms of sub-conventional threats, the 2008 attacks at Mumbai are an example of the potential danger of sea-borne terror. The Indian Navy is cognisant of these dangers, towards which our harbour infrastructure and defence of critical offshore installations has been progressively strengthened. The mechanisms for coastal security have also evolved significantly in the past decade. Several initiatives are being progressed to address these threats on an ongoing basis, in coordination with all stakeholders. While you would be aware of these initiatives, few recent initiatives include Ex SEA VIGIL, which was a coastal security exercise conducted earlier this year on a pan-India basis for the first time, from which we have drawn some important lessons. Additionally, Proof-of-Concept trials of a transponder system for sub-20m boats has been successfully completed, and the system will be rolled-out in a phased manner soon. We are also steering a National Maritime Domain Awareness (NMDA) Project, which aims at integrating all maritime stakeholders and associated databases.

In terms of conventional threats, development of a balanced multi-dimensional force is aimed at enabling capability of undertaking a broad range of missions. Our ships and aircraft are mission deployed and combat ready to undertake operations across the entire spectrum of warfare at short notice.

Defstrat. China has been critical of India’s Act East policy as it sees the policy as an attempt by India to manage Chinese strategy in South China Sea. What role to you envisage for the Indian Navy in furthering the Act East Policy and will the said role, in anyway, help countervail the Chinese in the South China Sea ?

CNS. Our Hon’ble PM has articulated our approach in engaging with maritime neighbuors through the vision of S.A.G.A.R, which stands for ‘Security and Growth for All in the Region’ Accordingly, India’s Act East policy is not directed against any particular country. Our approach is based on cooperation and mutual respect, as also upholding of a ‘Rules Based Order’ in accordance with established international law.

In this national endeavour, the Indian Navy plays a contributory role through its bilateral, trilateral and multilateral engagements with various maritime nations. We also recognise that the seas we share, require shared responses to common maritime challenges. The overall aim is to ensure a free, open and stable maritime domain that contributed to overall security of all nations.

Accordingly, the Navy actively participates in capacity building and capability enhancement initiatives with maritime nations in South East and East Asia. Some of the initiatives pursued include exercises, port calls, Passage Exercises (PASSEX), White Shipping Information Exchange agreements, technical and hydrography cooperation, training exchanges, etc. We recognise that there is tremendous learning value from sharing experiences with each other, and we have accordingly prioritised Subject Matter Expert Exchanges (SMEE) in niche areas. Humanitarian Assistance and Disaster Relief is another area where we cooperate with all nations, to help build greater interoperability and resilience.

As mentioned, these engagements are on mutually beneficial and cooperative terms, and are not directed against any country or region.

Defstrat. How will the Chinese String of Pearls affect us during war and what impact does it have on peacetime maritime operations? Does the Indian Navy have adequate capability to deal with actions that may emanate from the same?

CNS. We are closely watching developments in relation to China in the region. The commissioning of the Chinese Military Base at Djibouti in 2017 has augmented its sustenance capability in the Indian Ocean. In 2018, an average of seven PLA(Navy) ships and submarines were deployed in the Indian Ocean Region every month. Chinese investments in various projects across IOR are also known.

The Indian Navy is aware of the security implications of the enhanced presence of Chinese ships and submarines in the Indian Ocean Region and maintains a constant and close watch on such developments. We are assessing our concept of operations and acquisition plans to cater to the challenges. The operational outcomes of developing strategic imperatives in the IOR are factored in our planning to ensure that the Indian Navy remains poised to meet all maritime contingencies.

Defstrat. Do we have any constraints and issues regarding manpower? Are we getting enough people with requisite skill sets? There is also a need to enhance the technological threshold (regarding new technologies) of personnel, who have joined service a few years back? How are these issues being addressed?

CNS. A strong thrust has been given to increase the awareness amongst the youth, with regard to the Navy as a career option. Publicity campaigns are undertaken as a necessary precursor to recruitment to attract the right kind of youth. As a result, the Navy is getting adequate response from the youth of the country. Based on available data, we see healthy competition among candidates for all entries. This allows us to select the best from the available pool.

There is, indeed, a requirement to enhance the technological threshold of personnel, who join the service. All officers undergo basic orientation training at the Indian Naval Academy. B Tech curriculum has been introduced for cadet entry officers since 2009. The curriculum provides adequate academic grounding and also caters to the overall transition of an officer cadet to an officer. Post ab-initio training, officers undergo professional training, to hone their professional qualification towards discharge of duties onboard. The training is conducted using state-of-the-art infrastructure, simulators, emulators, etc. Officers also undergo Pre-Command Training (PCT) prior to appointment onboard ships, to update their know-how on ship specific systems. Selected officers undergo advanced training to shoulder higher command and management responsibilities.

Indian Navy has introduced a number of courses at various levels in order to stay abreast with dynamic security challenges and evolving warfare methodologies. In addition, short and adhoc courses on IT/ IW, Artificial Intelligence, etc. are also conducted at reputed universities to enhance skill-sets of officers and sailors in various specialised fields. In addition, Indian Naval personnel also undergo courses in friendly foreign countries to enhance their knowledge base and gain an international perspective. We are also committed to collaboration with Academia. Service personnel are encouraged to write papers, have discussions with reputed institutions and attend seminars. Indian Naval personnel are also encouraged to subscribe to various courses at government/ civil institutes, as part of the Professional Development Programme (PDP).  This provides naval personnel the professional training to adapt to changes in rapidly evolving environment, and prepare for challenges in the future.

Defstrat. The Indian Navy and the Indian Coast Guard have operated together for many years and have well evolved procedures for coordination with one another. Are there any areas where there is an overlap and further refinements can be made?