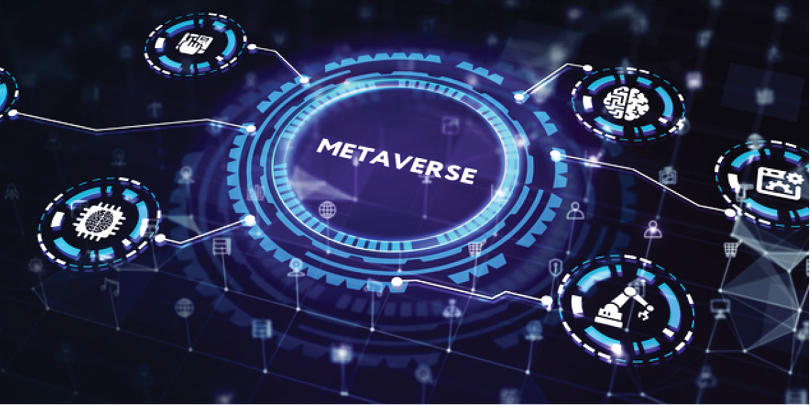 The term “metaverse” originated in the 1992 science fiction novel Snow Crash as a blend of “meta” and “universe”. Metaverse development is often linked to advancing virtual reality technology due to increasing demands for immersion. Recent interest in metaverse development is influenced by Web3, a concept for a decentralised iteration of the internet. Web3 and the Metaverse have been intentionally used as buzzwords to exaggerate development progress of various related technologies and projects for PR purposes. Information privacy, user addiction, and user safety are concerns within the metaverse, which stem from challenges facing the social media and video game industries as a whole.

As  a concept the Metaverse is a persistent, online, 3D universe that combines multiple different virtual spaces. One can think of it as a future iteration of the internet. The metaverse will allow users to work, meet, game, and socialize together in these 3D spaces.

At the present moment the metaverse isn’t fully in existence, but some platforms do contain metaverse-like elements. Certain advanced video games provide the closest metaverse experience on offer. Developers have pushed the boundaries of what a game is through hosting in-game events and creating virtual economies.

Cryptocurrencies can be a great fit for a metaverse as they allow for creating a digital economy with different types of utility tokens and virtual collectibles (NFTs). The metaverse would also benefit from the use of crypto wallets, such as Trust Wallet and MetaMask. Blockchain technology can provide transparent and reliable governance systems.

Some examples here are relevant as blockchain, metaverse-like applications already exist and provide people with liveable incomes. Axie Infinity is one play-to-earn game that many users play to supplement their income. ‘SecondLive’ and ‘Decentraland’ are other examples of successfully mixing the blockchain world and virtual reality apps.

When we look to the future, big tech giants are trying to lead the way. However, the decentralized aspects of the blockchain industry is letting smaller players participate in the metaverse’s development as well.

Metaverse is the next iteration of the Internet as an immersive virtual world’ – enabled by a convergence of XR and the internet. So the metaverse won’t replace the internet; it will instead be part of its next iteration. In fact, it need not even be ‘on’ (ie. connected to) the internet – it could instead use internet technologies and protocols, but on a separate secure network.

Extended reality is a term which represents a blend of augmented reality (AR) and virtual reality (VR). Sometimes the acronym ‘XR’ is used in its place. The technology is intended to combine or mirror the physical world with a “digital twin world” that is able to interact with each other. The fields of virtual reality and augmented reality are rapidly growing and being applied in a wide range of ways, entertainment, marketing, real estate, training, and remote work.

The box on the side gives a brief explanation of various technologies in this domain. It is essential to understand the differences as often many of us mix up the different iterations of immersive technologies.

A major VR paradigm shift emerged at the time of ‘simulator networking(SIMNET) in the early eighties.  SIMNET introduced network connectivity, allowing personnel to train together in a virtual world for the first time. The armed forces adopted it for collective training using simulators and internet networks.

In Augmented Reality, the heads-up displays (HUD) of military aircraft may be the most obvious example in the defence space. HUDs superimpose information, like speed, altitude and angle of movement on a clear panel in front of the pilot.  The credit for this may go to the RAF dating back to rudimentary enhancements made to the gunsights of night fighters in the 1940s.  Modern helmets used in military fighter aircraft take it further. For example, the Helmet Mounted Display System (HMDS) of the F35 does away with the more common HUD, displaying target data, geometry and video feeds taken from sensors on the aircraft. Instead of the HUD mounted atop the dashboard of earlier fighters, the HMDS puts flight and combat information on the helmet visor, allowing the pilot to see it no matter which way they are facing. Infrared and night vision imagery from the Distributed Aperture System can be displayed directly on the HMDS and enables the pilot to “see through” the aircraft. The HMDS allows an F-35 pilot to fire missiles at targets even when the nose of the aircraft is pointing elsewhere by cuing missile seekers at high angles off-boresight.

The metaverse can be thought of as a convergence of the XR technology with the addition of internet connectivity.  In fact, some have referred to the metaverse as the internet’s next iteration, but a commonly agreed definition has yet to appear.

Despite unclear definitions, metaverse proponents and enthusiasts make optimistic predictions, pronouncements and promises. So, what might the technology realistically have to offer defence? Some of the possible applications are:

Operational Training through Effective Simulation. The armed forces have decades of experience using virtual reality as a training tool. It’s worth mentioning that technology need not be 100% realistic and true to life to be useful, indeed, early simulators were clearly limited by what was available at the time, and usually to just one user at a time.

Metaverse technology offers the potential of more realistic individual or collective training which is also more accessible (allowing personnel to train remotely, from wherever they are and thus adding more participants). Training could also be more realistic and varied (for example, presenting more scenarios, environments and assets).

Validation of Operational Concepts. The metaverse could also be used as a virtual ecosystem to validate tactical and strategic concepts.  Traditional, physical resource-constrained military exercises tend to follow specific scenarios and rules with a defined aim, but the open possibilities of the metaverse’s synthetic environments provide the option for unstructured wargaming, which is far more representative. Such open-ended wargaming offers the chance for real experimentation- driven by advances in data capture, storage and analysis. This could yield data which could be later drawn upon for more formal wargames or capability testing.

All of the above, combined with increased access, could allow feedback and ideas to be gathered from across the field units, formations and training establishments. A fully ‘joined up’ metaverse could also help to break the silos that traditionally divide military’s various domains – better facilitating combined arms operations, and creating a ‘feedback loop’ that ensures that lessons learned are not forgotten, and are transferred and iterated – all the way from early stage capability development, to eventual deployment and subsequent disposal.

Testing Facilities. This is one of the biggest issues facing us today. There are very limited and controlled facilities for test and evaluation (T&E). The T&E space is a heavy user of simulated environments for testing; such testing is usually cheaper and logistically easier than physical testing. We can devise the concept of ‘digital twin’ – a detailed synthetic duplicate of a real-world component or system.

These digital twins could be integrated into the metaverse, combining training and mock exercises with live testing and evaluation of new capabilities. This would allow field formations and DG Capability Development to see in real-time how operational capabilities  perform under a range of circumstances – more quickly, cheaply and with a level of operational security not available in physical testing.

Human Performance. Augmented Reality systems could be a better way for personnel to manage the vast amount of information available to them, and visualise the battlespace. As previously mentioned in the HUD example, AR has been a feature of fast perceptual processing for decades. If the screen-based HUD could be thought of as an earlier generation of military AR, then head-mounted systems with increased functionality could be thought of as its next iteration.

Microsoft’s Integrated Visual Augmentation System (IVAS), a military version of the company’s HoloLens 2 is a possible technological solution to this requirement.

Recruiting  Agniveers. It may sound a bit ambitious, but an effective way to reach out to the youth and spotting some talented ones can be through Metaverse. Metaverse “allows people to interact with others that they may never have had the chance to, in a setting they may not be able to visit”.  This offers a lot of possibilities, and defence is not new to using virtual spaces in a ‘human resource’ capacity. Metaverse environments could take this to another level, providing prospective Agniveers with an accurate idea of what military life might be like – perhaps attracting recruits, through gaming and gamification exposure, to specific roles that match their profiles.

Alternatively, non-defence metaverse spaces (for example, major virtual sports events), could be used to raise awareness and reach new audiences. The metaverse could also form a place for existing personnel to communicate and collaborate, or as a place to engage and retain personnel, or support their mental health.

These environments could also be used for ‘talent spotting’ – noticing personnel who perform well in various scenarios – and the specific areas in which they excel, using data capture to create granular and personalised performance records that update automatically, based on activities within the metaverse. In other words, a highly detailed form of qualifications – mitigating skills and knowledge fade.

A military metaverse will challenge how defence operates – for example, how it manages information, how it interacts with its personnel, how it thinks about operating environments and how it plans for the future. But the metaverse is not a ‘magic pill’. If not properly planned, it could create a new set of problems and/or prove to be an expensive distraction. However, there are a lot of potential benefits. For example, the metaverse could be a realistic, immersive and persistent environment where engagements and actions have real, enduring effects on the real world – a new kind of interconnectivity. This could drive new ways of operating, and break through stovepipes across defence domains. There are significant opportunities for new ways of thinking and working.

This article includes excerpts from a feature in Qinetic Tech watch

The term Extended Reality (XR) encompasses a range of computer-altered realities. These include:

– Augmented Reality (AR) – A technology that superimposes a computer generated image on a user’s view of the real world, thus providing a composite view.

– Virtual Reality (VR) – The computer-generated simulation of an environment that can be interacted with in a seemingly real or physical way, by a person using special electronic equipment, like a helmet with a screen inside or gloves fitted with sensors. Example: Beat Saber

– Mixed Reality (MR) – A medium consisting of immersive computer-generated environments in which elements of a physical and virtual environment are combined.

Though biased towards visual and audio information, these technologies can encompass other sensory modalities, like touch, smell and taste.

Dependence on VR technology has limited metaverse development and wide-scale adoption.  Limitations of portable hardware and the need to balance cost and design have caused a lack of high-quality graphics and mobility. Lightweight wireless headsets have struggled to achieve retina display pixel density needed for visual immersion. Another issue for wide-scale adoption of the technology is cost, with consumer VR headsets ranging in price from $300 to $3500 as of 2022.

There has been no wide-scale adoption of a standardized technical specification for metaverse implementations, and existing implementations rely primarily on proprietary technology. Interoperability is a major concern in metaverse development, stemming from concerns about transparency and privacy. There have been several virtual environment standardisation projects.

Universal Scene Description is a specification for 3D computer graphics interchange created by Pixar and supported by Blender, Apple’s SceneKit and Autodesk 3ds Max. The technology company NVIDIA announced in 2021 they would adopt USD for their metaverse development tools.