Sub Title : Quad also focuses on issues other than China 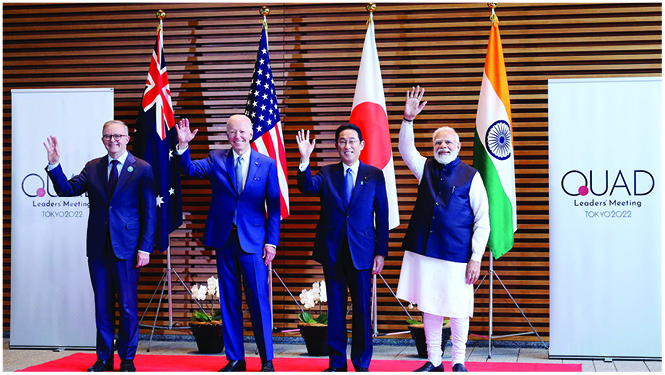 Though the Quad led contemporary strategic discourse on the Indo-Pacific has a strong focus on the geostrategic contestations targeted against China, Quad members are also committed to work for the region’s peace and stability through multifarious initiatives. The article enunciates the same

India has joined the Indo-Pacific Economic Framework (IPEF), and Prime Minister Narendra Modi announced that his country is committed to an “inclusive and flexible” structure. He also listed out the three pillars of the IPEF i.e. “trust, transparency and timeliness” or the three ‘Ts’. The 12 partner countries (Australia, Brunei, India, Indonesia, Japan, Republic of Korea, Malaysia, New Zealand, the Philippines, Singapore, Thailand, and Vietnam) have identified numerous issues to “strengthen economic partnership amongst participating countries with the objective of enhancing resilience, sustainability, inclusiveness, economic growth, fairness, and competitiveness in the Indo-Pacific region”.

It is noteworthy that the Quad Member States have been discussing many different global challenges such as the COVID19 pandemic, climate change, clean energy, resilient infrastructure, supply chains, critical and emerging technologies, cyber security and space. This was also evidenced during the first ever in-person Leaders’ Summit of the Quad in September 2021. Prime Minister Scott Morrison of Australia, Prime Minister Narendra Modi of India, and Prime Minister Yoshihide Suga of Japan and President Joe Biden of the US agreed to deepen ties and advance practical cooperation on multiple yet diverse 21st century challenges.

The COVID19 pandemic, with all its fury and the resultant human despair, was a trigger for the Quad members to discuss issues concerning vaccines.  The outcome was their “pledge to donate shots across the world” which are being manufactured in India by Biological E, and will begin to roll out in the first half of 2022. The issue was also highlighted during the Fourth Annual US-India 2+2 Ministerial Dialogue in April 2022 wherein the two partners expressed their happiness that the Quad Vaccine Partnership had made “remarkable progress” and “committed to expedite delivery of the first batch of vaccines to countries of the Indo-Pacific and beyond”.

Climate change remains high on Quad member’s agenda. The Quad countries have decided to tackle the climate crisis collectively by instituting policies and plans to achieve temperature limits i.e. 1.5°C above pre-industrial levels, which was set out and agreed to in the 2015 Paris Climate Deal. Also, Quad countries announced commitment to “work together for successful outcomes at the COP26 and G20 that uphold the level of climate ambition and innovation that this moment requires”.

Closely associated is the issue concerning resilience against disasters. The Global Risks Report  published by the World Economic Forum (which identifies risks  both natural and man-made) has, in the 2021 edition, specified climate action failure and extreme weather events the top two “most severe risks on a global scale over the next 10 years”. The Quad countries agreed to strengthen the Coalition for Disaster Resilient Infrastructure (CDRI). This Indian initiative was announced by Prime Minister Narendra Modi at the UN Climate Action Summit 2019 wherein he called upon the international community including private sector and knowledge institutions to pursue a “practical approach and roadmap”  to make “infrastructure resilient in the face of disasters” under the CDRI.

The Quad has also called for decarbonisation of energy sources. The 2021 Leaders’ Summit had noted that Quad countries are “uniquely situated to deploy green port infrastructure and clean-bunkering fuels at scale”. It is useful to point out that the International Maritime Organization (IMO) too has acknowledged the need to reduce the carbon footprint of the international shipping and its GHG strategy envisages reduction in CO2 emissions across international shipping, by at least 40% by 2030, 70% by 2050, compared to 2008 levels.

While the IMO has targeted shipping, the seaports account for nearly 3% of total carbon emissions worldwide. In fact, decarbonisation is “mission-critical” for seaports wherein a balance is achieved between economic objectives and environmental protection relating to reduction of energy consumption. The World Ports Sustainability Program (WPSP) aims to contribute to the sustainable development of world ports in line with the UN’ Sustainable Development Goals (SDGs).

The Indian Ports Bill 2021 (Chapter X: Prevention, Containment of Pollution and Response) incorporates a number of international regulatory legislation such as the MARPOL Convention, the Ballast Water Management Convention and elaborates on vessel generated waste. This is in line with the IMO adopted mandatory measures to reduce emissions of greenhouse gases (GHG) from international shipping under MARPOL, the Energy Efficiency Design Index (EEDI) mandatory for new ships, and the Ship Energy Efficiency Management Plan (SEEMP).

The Quad Shipping Taskforce is being constituted that will “invite leading ports, to form a network dedicated to greening and decarbonizing the shipping value chain”. The Task Force is also mandated to examine low-emission or zero-emission shipping corridors and establish a Quad Clean-Hydrogen Partnership. In fact, ‘Green hydrogen’ is the new oil and can potentially help the global commitments of net-zero emissions by 2050.

Energy Transition is a major area of cooperation among the Quad members.  After the COP26 meeting in November 2021, at the fourth Quad Foreign Ministers’ Meeting on 11 February 2022, the Foreign Ministers of Australia, India and Japan and the Secretary of State of the United States joint statement noted that they plan to “establish responsible and resilient clean-energy supply chains” and had welcomed Australia’s proposal to host an Indo-Pacific Clean Energy Supply Chain Forum in mid-2022.

At the bilateral level, India and Australia are to join hands to “drive down the costs of new and renewable energy technologies under a new low emissions technology partnership agreement”. It is pertinent to mention that “More than 90 per cent of solar cells globally use Australian technology. Over the next 10 years, India will be one of the largest adopters of solar technology in the world and Australian innovators are exceptionally well-placed to tap into this market.”

Similarly, at the India-US 2+2 dialogue, the United States’ announced “ signing of the Framework Agreement of the International Solar Alliance (ISA). Under the Strategic Clean Energy Partnership (SCEP) they agreed to “explore and identify low carbon pathways to develop and undertake joint research and development projects, mobilize finance, develop and promote green technologies, and enhance technical collaboration aimed at building on complementarities for facilitating energy transition”.

At another level, Australia, Japan and the US have endorsed the Indo-Pacific Oceans Initiative (IPOI) announced by the Government of India. It is an open, inclusive, non-treaty-based global initiative for mitigating challenges especially in the maritime domain through practical cooperation in seven thematic areas i.e. (a) Maritime Security; (b) Maritime Ecology; (c) Maritime Resources; (d) Capacity Building and Resource Sharing; (e) Disaster Risk Reduction and Management; (f) Science, Technology and Academic Cooperation; and (g) Trade, Connectivity and Maritime Transport. India promotes practical cooperation under the IPOI. For instance, Japan has been entrusted to lead the IPOI pillars of Trade, Connectivity and Maritime Transport, and Australia would spearhead the Maritime Ecology pillars. Meanwhile, the Australian government, under the Australia-India Joint Declaration on a Shared Vision for Maritime Cooperation in the Indo-Pacific has launched the Australia-India Indo-Pacific Oceans Initiative Partnership (AIIPOIP).  It aligns with other bilateral arrangements, including Australia-India Maritime and 2+2 Dialogues, and with Australia’s cooperation with ASEAN under its Outlook on the Indo-Pacific.

Meanwhile the ASEAN has adopted the ASEAN Outlook for Indo-Pacific (AOIP) which builds on the existing platforms such as the EAS. ASEAN Member States believe that these mechanisms are fully equipped to “better face challenges and seize opportunities arising from the current and future regional and global environments” and the most important feature of the AIOP is ‘ASEAN Centrality’ which is the underlying principle for promoting cooperation in the Indo-Pacific region.  India and Japan have welcomed the AOIP, support ASEAN-led EAS framework and see it as contributing to peace, stability, and prosperity in the region.

Although the contemporary strategic discourse on the Indo-Pacific led by the Quadrilateral Security Dialogue (QSD), colloquially referred to as the Quad, has a strong focus on the geostrategic contestations targeted against China, the Quad members are committed to work for region’s peace and stability through development initiatives and the Indo-Pacific Economic Framework (IPEF) is a testament of that policy.

Finally, it is fair to argue that New Delhi is keen to collaborate with partner countries under the IPEF and work towards “advancing regional economic connectivity, integration and boosting trade and investment within the region”.