A Family of Light Armoured Vehicles 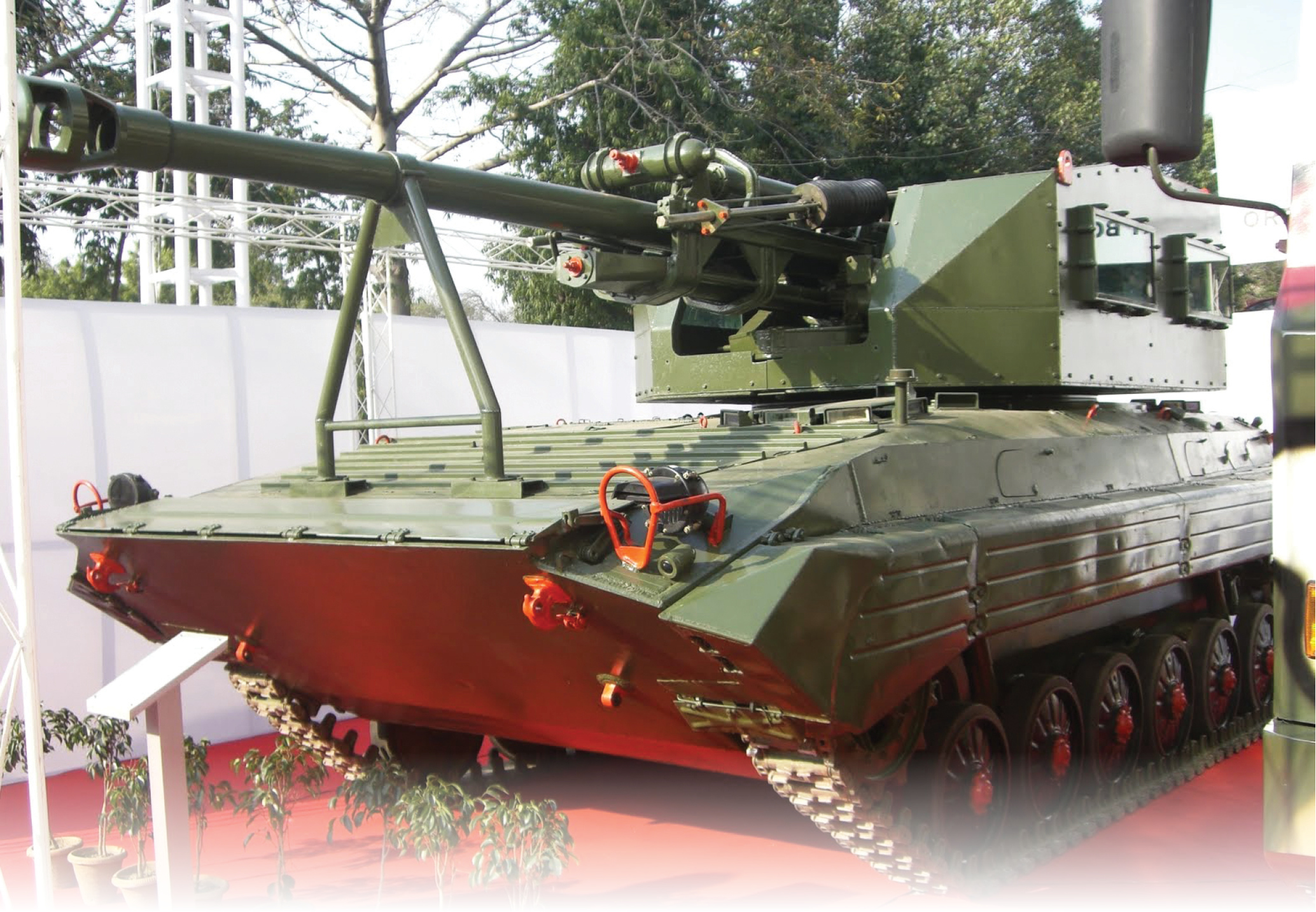 The Ladakh standoff has that highlighted India needs a light tank or indeed a family of light armoured vehicles. We have been seized of this issue for the past many years. However, for reasons not very hard to fathom we have not been able to take it to a logical conclusion. It certainly deserves more attention

Since the advent of British Mark I tanks at the Battle of Somme on 15 September 1916, armoured vehicles of every conceivable kind have turned the tide in some significant battle or the other, lending credence to the belief that deliverance will be bestowed upon a beleaguered, battle weary army by the proverbial “charge of the cavalry”! Light tanks have ‘pulled more than their weight’ in many battles, especially in the context of the Indian sub-continent. As early as the Burma Campaign in WW-II, the 255th Indian Tank Brigade, comprising 9 Deccan Horse and 5 Probyn’s Horse with Stuart Tanks, fought in the battles of Meiktila and Pokoku, Irrawaddy River operations and in Operation Dracula. In independent India, during the Battle of Zoji La in 1948, 7 Cav led by Lt Col Rajinder Singh “Sparrow” achieved the ‘impossible’ feat of inducting Stuart light tanks (fondly referred to as ‘Honeys’) which saved Ladakh from being annexed by Pakistan. 1962 saw AMX-13 of 20 Lancer airlifted to Chushul area and stopped the Chinese in that sector. Capt Ashwini Dewan (now Maj Gen retd) led the charge. AMX-13 and PT-76 of 45 Light Cav were used in East Pakistan and in a limited manner in 1971 Battle of Asal Uttar. Thereafter, light tanks disappeared from orbats, remaining only in battle lore, some insightful articles and the occasional ‘Requirement Document’.

In the mid-1980s, DRDO replaced the turret of BMP-II with a 105 mm artillery gun, but the project was terminated in 1994. The DRDO designed another light tank based on BMP-II chassis, by mounting a French GIAT TS-90 turret with a 105 mm gun, with a semi-automatic FCS. Firing and stability trials were conducted, but once again, the project was shelved.

As soon as the country’s military planners shifted their strategic focus in 2009 from Pakistan to the security threat posed by China, light tanks were envisaged as part of the two mountain divisions, that were then under raising, for deployment along the 3,488-km-long disputed LAC. They were also aimed at providing firepower to the proposed 17 Mountain Strike Corps to counter the PLA.

A proportion of the light tanks were also to be inducted as force multipliers to India’s ‘cold start’ doctrine, a limited war scenario to achieve ‘bargainable’ military gains. Alongside, these platforms were envisaged to be deployed in urban and semi-urban environments and in riverine terrain and marshy ground along India’s eastern borders and Rann of Kutch, and also for various UN Peacekeeping Missions.

An RFI was first floated by Army HQ as early as October 1999. As per the RFI floated in 2009, the requirement was of approximately 200 light tanks (wheeled) and approximately 100 light tanks (tracked), weighing less than 22 tons, capable of operating at heights of more than 3,000 meters in hilly terrain. The 8×8 wheeled and tracked light tanks were to be 2.8m high and 7.8m long and needed to possess a low silhouette and amphibious capability. High ground clearance, defensive aid suites offering protection against laser, thermal and radar guided munitions NBC protection were also mandated.

The tanks needed to be able to distroy highly protected armored vehicles and main battle tanks from a distance of more than 2 kilometers, be able to fire HE/AP anti-tank munitions and guided missiles and have the latest fire control technology. It was anticipated that the overall requirement could go up to 500 light tanks.

In 2012, the impending deployment of two tank brigades, one each in Ladakh and north-east India, involved raising six new armoured regiments. In addition, three mechanised infantry battalions needed be raised, amounting to about 180 BMP-IIs. The Ladakh-based 14 Corps was to be allocated an armoured brigade to cover the flat approaches from Tibet. The second armoured brigade was to be located in the Siliguri corridor in Bengal.

Amid the recent standoff with China at multiple points in eastern Ladakh, the Indian Army has received the government’s approval to buy light tanks for deployment in high-altitude areas, under a ‘Fast Track’ procurement process. India has very few options to choose from, and it is not clear which tanks the Indian Army is looking at for emergency procurement. Furthermore, in what time frame can we import the tanks? Can we procure and deliver them to the operational areas before winter sets in and snowfall blocks all land approaches to these areas? How many of them do we need to buy so that they make a meaningful lot?

Some light tanks which are currently in service are mentioned in the boxes.

However, what is of greater import is that in order to make a significant impact on the theatre of operations, we need not just light tanks but a family of light vehicles to include ICVs, light artillery, light air defence assets and light combat engineer & communication assets. In addition, logistic vehicles like ambulances and recovery vehicles would  also be required. Depending on the intended employment an appropriate mix of tracked and wheeled need to be looked at.

One Possible Option-Modify the BMP

Besides what is available in the market one possible option is that we start by intelligently harnessing what we already have i.e., our BMPs, modifying, upgrading and improving it with ‘available technology’ in a manner that enhances operational efficiency and combat potential in a cost optimal manner. A few suggested ways of enhancing capabilities of the existing BMP are as follows.

Automotive. The Indian Army has an estimated 3,000 BMPs of different types. Most AFVs in the world have migrated to the ‘power pack concept’ owing to the obvious operational and logistical advantage that this concept affords. A 450 HP power pack, proven on the BMP is readily available. Given the number of BMPs to be upgraded and the need for spare engines, these engines could be license-produced in India in a phased manner, not only obviating need to source engines from foreign sources, but also to the vexed problem of spares. Like our software industry, our auto components industry has matured enough to should be able to undertake this task with relative ease. If after all enhancements and additions, the gross weight of the end result is pegged at 20 tons, we achieve a power-to-weight ratio of 22.5!

Combat Potential. Many companies offer a “Modular Unmanned Turret” for upgrading light and tracked light armoured vehicles. These turrets can be integrated with 12.7/7.62mm, 30mm, 40mm, 90mm or 105 mm weapons, depending upon the intended application. The turret with an automated FCS, and can be adapted for peace-keeping operations, point air-defence use, for a light tank or light artillery. 4th Gen ATGMs can be combined with loitering munitions, integrated into the same FCS, so that these AFVs have ISTAR capabilities. Add U/V/ HF SDRs with wireless harness for dismounted soldiers, and you have a communication system which can support streaming video, image, data or voice.

Safety, Comfort & Protection.    A number of options are available to fit spall liners,  side-wall mounted seats for mounted soldiers, slat armour for protection against RPG type threats, add-on armour to enhance protection to STANAG 4569 Level 3 or 4, against land-mine threats under belly to Level-1 and under tracks to Level-2a, and larger rear doors for ease of ingress/ egress.

All the above embellishments can extend the service life of the BMP by a couple of decades. But, how do we achieve this in a reasonable time-frame and cost? A DRDO-Industry Project under DcPP Model would probably be the one with maximum chance of success.  DRDO would act as a Design Coordination Agency and a platform for making available Testing & Evaluation assets.  A PSU like BHEL could act as System Integrator. OF Medak and suitable private sector companies should develop and deliver various assemblies, with the help of select foreign technology partners, working on a phased indigenisation programme.

Given the current operational and economic circumstances, it is imperative to find a balanced approach. Add to this Mission ‘Aatamnirbharta’ which mandates ‘Make in India’.