A Quagmire of Strategic Inevitability That India Faces 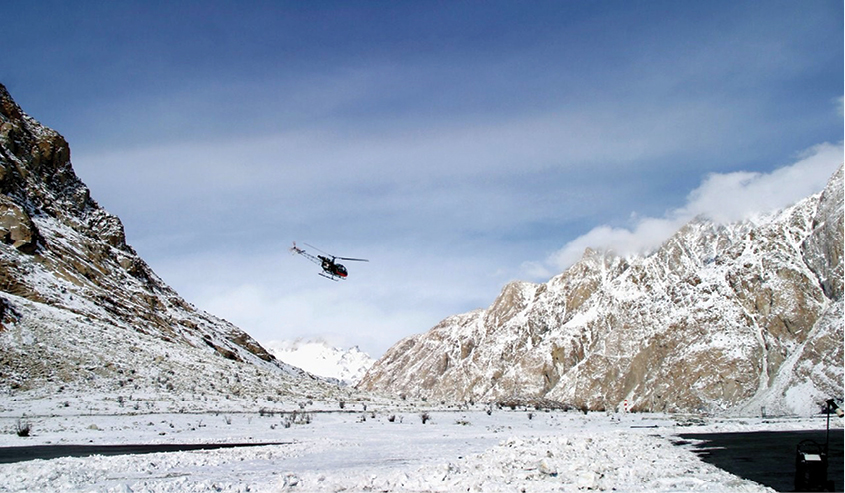 India is the largest component of the Indian Sub-Continent; one of the most populated and demographically diverse regions of the world. A strong Indian Military is therefore essential for peace and stability on the Indian Sub-continent.

The world today is experiencing an exponential growth in Weapon, Surveillance, Information, Communication and Cyber Technology. Military strategy planners are rapidly adopting these contemporary technologies to enhance war fighting capabilities. While western nations seek out the enemy in distant battlefields and settle scores without collateral damage to their homelands, India does not enjoy this luxury. It shares borders with the enemy and coexists with hostile neighbours in an extremely volatile region of the world. India’s socioeconomic development, and that of its neighbours, can only flourish in a secure environment which we build for ourselves. Also, that this region has immense role to play in world affairs would be an understatement.

The geography of India is perhaps the most complex and challenging in the world. India has 15107 Km of land border and a coastline of 7517 Km. India also has a total of 197 islands accounting for 2094 Km of additional coastline. These borders comprise a vast variety of terrain encompassing deserts, plains, riverine deltas, hills, mountains, high altitude and glaciated regions. Many of borders are very porous due to the terrain and ethnic affinities of population on both sides of the borders. The enormity of our size will require us to be always organised and prepared to meet challenges of uncertainty.

India shares a long and porous border with hostile neighbours:

These hostile borders extend from a few feet above Mean Sea Level to Siachen, the highest battlefield in the world (at an average altitude of 20,000 Feet above Mean Sea Level). Consequently, our Military must operate in all types of terrains from the seas to the blue skies and all that lies in between. At any time, the Indian Army is deployed in temperatures ranging from +50 Degrees Centigrade to -50 Degrees Centigrade.

In addition, relations with the other neighbours remain friendly but unpredictable due to a few unresolved boundary issues and interfering influence by the two enemies. The share of borders with other neighbours are:

The complexities of terrain will always lure an enemy to indulge in low cost proxy war and asymmetric strikes using terrain to his advantage.

Pakistan was partitioned from India in 1947. Since then both nations have fought three wars. While Pakistan remains in illegal occupation of a part of Kashmir (13,297 Sq Km), it holds India responsible for dismembering East Pakistan and liberating Bangladesh in 1971. Enmity against India is ingrained in their psyche. Exploiting the principals of asymmetric warfare, Pakistan continues to engage India in a proxy war of cross border terrorism; by rendering a proxy wars it does not itself participate with its armed forces in the sphere of conflict, but, keeps Indian forces actively committed. Pakistan successfully uses insurgent groups as ‘strategic assets’ in its Proxy War against India. As a result, hostility with Pakistan is intense and the trigger for war always exists; e.gKargil, the attack on Indian Parliament, 26/11 etc and most recently Pulwama.

China is a large northern neighbor; both nations have fought a war in 1962. China occupies Aksai Chin (38,000 Sq Km), which de jure is part of India. It keeps asserting claim on Arunachal Pradesh (92,000 Sq Km). The Line of Actual Control (LAC), which came into existence after the war in 1962, remains disputed. Since 1962, there have been three violent incidents; in Nathu La (1967), Wangdung (1986) and Galwan (2020). China also continues to provide covert assistance to insurgent groups in the North Eastern States. These groups find safe havens in the jungles of Myanmar and Bangladesh.

Sino-Pak collusivity is another serious threat. Starting with the premise of ‘enemy’s enemy is a friend’, their relationship has blossomed, which is of strategic concern for India. China’s support to the Pak missile and nuclear programme and reports of the presence of Chinese troops in Gilgit-Baltistan region only complicate matters further.

Even friendly neighbours in the Indian sub-continent are vary of ‘big brother India’ and have allowed their soil to be used by its opponents for economic and military activity. By its sheer size India dwarfs these neighbours. India is 72 percent of the sub-continent in area and 77 percent in population. Not only size; India’s larger military and economic strength also constitute a critical factor in its relations with the neighbours.

Surprising, but believe it, Asia has the biggest density of missiles and nuclear powers compared to other continents. To add fuel to fire, these nations share land borders and have adversarial relationship. The threat of non-state actors acquiring weapons of mass destruction is graver than anywhere else. To add to our worries, Pakistan claims to have an arsenal of Nuclear Weapons and has not renounced its first use. It hopes to use these to offsets India’s conventional superiority. It could also use them to terminate a war where it finds itself in a disadvantageous position due its lack of strategic depth. A nuclear strike could be an excuse for preservation of its military or weak democratic regime or even revenge the humiliation suffered in 1971. Whatever the reason, they would justify it as being the last resort available or even blame it on rogue elements.

A nuclear conflict in the sub-continent is therefore a predictable but ignored event with serious consequences; a “pink flamingo” – a known known, the inevitable surprise which is studiously ignored by policymakers. In addition to a viable deterrence, India needs to build capability to work through and/or reverse an adverse tactical chemical, biological, radiological and nuclear situation. India and Pakistan are the only nuclear armed nations in eye ball to eye ball contact that have an armed face off nearly every day; a scary situation by any account.

Drugs are another cause for concern; India is in the neighbourhood of the ‘Golden Triangle’ and ‘Golden Crescent’. The Golden Triangle is the area where the borders of Thailand, Laos, and Myanmar meet at the confluence of the Ruak and Mekong Rivers. Golden Crescent is the area located at the crossroads of Central, South, and Western Asia. This space overlaps Afghanistan, Iran, and Pakistan, whose mountainous peripheries define the crescent.

These are Asia’s two principal areas of illicit opium production. War, terrorism, and fragile political environment have facilitated an active heroin trade throughout the region. Narcotic trade fuels crime and terrorism. Drug addiction and narco trafficking is a potent tool to destroy societies. The situation in our Border States is grave; narcoterrorism is knocking at our doors and policymakers seem insensitive to this existential threat to peace and tranquillity.

Aggravating the many threats is India’s location within striking range of the epicentre of international terrorism i.e Pakistan. Terrorists of many nationalities assemble and train here to carry out a proxy war in Kashmir at Pakistan’s behest.

Indian Ocean the third largest body of water in the world is its strategic playground; it contains vital sea lanes that help feed Asia’s largest economies. These sea lanes are among the most strategically important in the world. According to the Journal of the Indian Ocean Region, more than 80 percent of world’s seaborne trade in oil transits through Indian Ocean choke points, with 40 percent passing through Strait of Hormuz, 35 percent through Strait of Malacca and 8 percent through Bab el Mandeb Strait.

China is known to be rapidly expanding its influence in the Indian Ocean region. Its military indulgence in Gwadar (Pakistan), Hambantota (Sri Lanka), Sonadia (Bangladesh) and Coco Islands (Myanmar) establishes the strategic need for a ‘Blue Water Navy’ for India.

Additionally, the Indian peninsular has more than 12 major port cities. They offer lucrative targets to terrorists. India possesses 587 MMT of crude oil and 608 billion cubic metres of gas reserves from offshore drilling platforms, which are strategic assets of the nation. Pipeline supply of oil is also expected from the Gulf and Central Asian Republics in the future. These are vulnerable to asymmetric threats. Nearly 90% of the trade by volume of the country is carried out by sea. In order to sustain economic growth, it is therefore vital that the maritime trade is protected from subversive activities. A large number of sensitive installations exist along the coast such as Bhaba Atomic Research Centre Mumbai, Kalpakkam Nuclear Power Plant, Mumbai High Offshore Oil Facility, Chandipur-at-Sea Missile Testing Range in Orissa and the Equatorial Rocket Launching Station at Thumba and Goa Shipyard.

A recent addition to the factors influencing Modern Warfare is the Cyberspace. The evolution of Cyberspace as the ﬁfth dimension of warfare calls for a de-novo approach to develop strategies, tactics and organisations for this domain. The centre of gravity of this new form of warfare in ﬁfth dimension has shifted to data and networks. Deterrence in the real world implies a credible retaliatory capacity which scares an enemy from attacking; happens when they know that if they attack, they will be decimated. Would this then apply to the Cyber Domain? Well ‘Maybe’ and ‘Maybe Not’. In the Cyber Space, deterrence really cannot be a panacea to most problems.  While it may deter some, it will not scare or deter all; especially not the lone rangers and the non state actors. For the others, Cyber Deterrence is ensured by a very strong attack potential which makes the adversary fear for damage and cost of an intrusion or attack. The need to exploit technology and outwit adversaries in the Cyberspace to damage his capability to ﬁght a war is indeed an emerging strategic challenge. While the World Armies are building stronger Data Networks and Cyber Units, the Indian Army under the influence of the old guard obsessed with a ‘Boots on Ground Obsession’ are busy downsizing the enabling entities.

Politically, on the international platform, India has become a participant in global decision making. In this changed world order; it has graduated from the periphery to centre stage. A commensurate growth of its military footprint and influence is essential to meet growing security challenges and retain its influence in the political arena. Militarily India must transform to the status of a regional military power with capability to deter any misadventure of conventional, asymmetric or nuclear nature; its roar must put an end to decades of proxy war and cross border terrorism. Balakote is an example of a tough response which has put Pakistan on the backfoot. The strong punitive action adds wings to India’s desire of becoming a regional military power of substance and enjoy its space in the global political centre stage. The bottom-line message is that a strong nation cannot be bullied. The Strategy of Deterrence’ however requires a muscular Military that is not perennially starving for budget. Guns or Butter debates cannot apply to a nation facing multi dimensional threats. Kautaliya in his Arthashstra 2000 years warned of four threats:

Without doubt, resurgent India faces all threats that Kautaliya predicted and the quagmire of strategic inevitabilities that India faces is indeed challenging. Our leadership needs to study these well to create a comprehensive strategy to shape our great nation into a regional power of consequence.