A Tribute to General Rawat

Sub Title : Farewell - the most talked about military personality in recent times 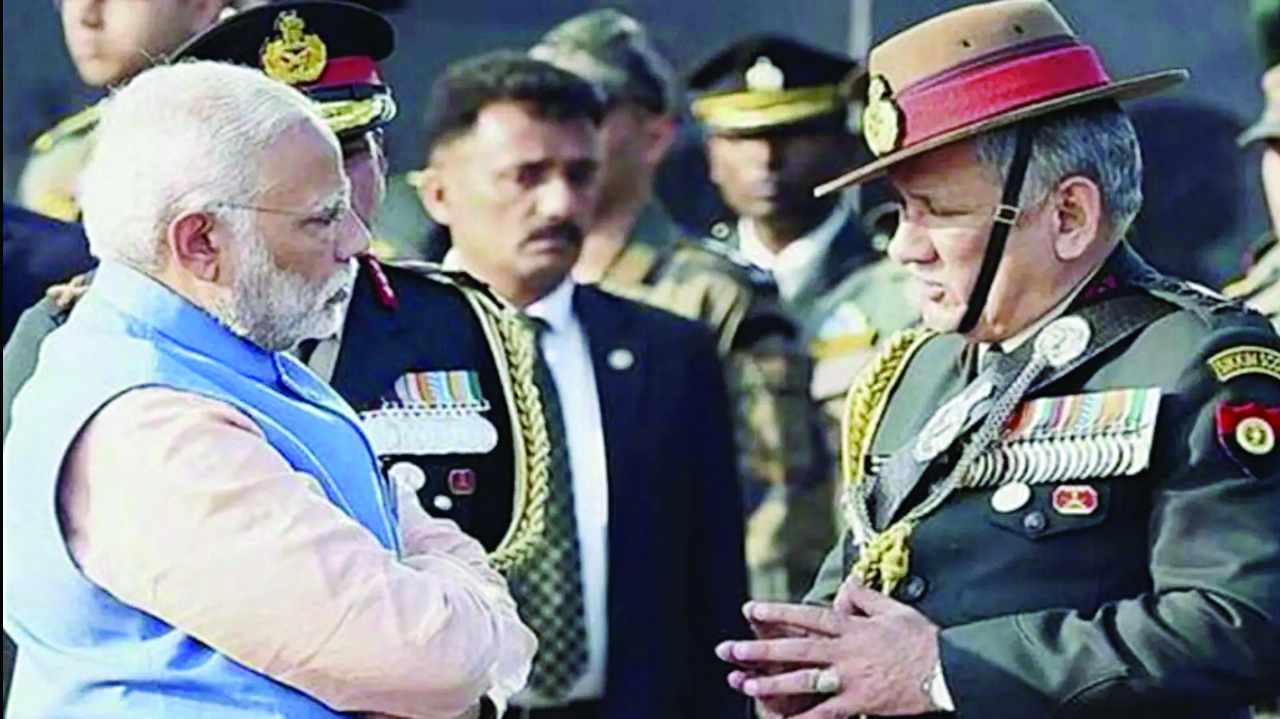 General Bipin Rawat personifies a military leader who evoked a variety of emotions during his life in uniform and even after death. He has also been the most talked about military personality in recent times. And this is not restricted to the Armed Forces of India, as his persona reached out to civil society as well in India and abroad. For one, he was one of the few 4-Star Generals to have served for five years, first three as the Army Chief followed by two years as India’s first Chief of Defence Staff. Next, his tenure coincided with a government which is ushering in major changes in the Indian polity, and General Rawat set the course for bringing in reforms within the Army as well as the other two services. Bold decisions need to be taken to change a conventional army steeped in tradition, both operationally and administratively, and Bipin Rawat proved equal to the mammoth task. Most of all, his mandate as India’s first CDS was huge. He bore a responsibility that would have far-reaching consequences not only for the armed forces but the nation as well.

Gen Rawat is known for having been a military leader who worked tirelessly with missionary zeal and possessed impeccable integrity. He would put in endless hours of work and yet be cheerful and ready for more. As a person, he was very approachable with a down to earth demeanour. His manner was open and frank, and he often spoke from his heart which at times exposed him to differing interpretations by the media, adversaries and even his friends. He was always humble enough to accept suggestions, sharp enough to sift wisdom from ordinary, resolute enough to accept critique and completely devoted to the nation’s cause and tough enough to put in 18 hours of work a day.

I met him as Vice Chief of the Army Staff on the day of the first surgical strike across the LC. His demeanour was calm and cheerful. As the Vice Chief, he would have hardly rested during the past couple of days, but as was his trademark style, Gen Rawat would never show any signs of stress or fatigue.

A few weeks later, he spoke at one of our seminars on Armoured and Mechanised warfare. On the sidelines, Rawat and I discussed wheeled ICVs vs tracked ones, Army’s need for a light tank, and the urgent requirement to provide the Infantry with protected mobility. A few weeks later he was selected to be the next Chief of the Army Staff. For the next five years, General Rawat worked tirelessly to face the numerous challenges that came his way, stoically and indefatigably, with the utmost sincerity of a man with a purpose.

South Asia Defence & Strategic Review was fortunate enough to interview Gen Rawat on completion of one year in office as the CDS (we were ready with the questionnaire for January 2022 as well). The interview was carried in our Jan – Feb 2021 issue as the lead story. There were a number of issues that were discussed during our three-hour interaction in his office. Lt Gen Ata Hasnain (Retd), Member NDMA and Chancellor Kashmir University, who had preceded Bipin Rawat in some important appointments during service, was gracious enough to join in the discussion which covered a very vast canvas, mainly at the strategic level. Later, on another occasion, Lt Gen JP Singh, former Deputy Chief of the Army and I met with the CDS to discuss issues related to Capability and Capacity Development. Some part of the discussions not included in the published interview is covered in subsequent paras.

Afghanistan. Gen Rawat discussed his assessment of the situation in the wake of US pullout and how it was likely to impact the region geostrategically. He then put forward a couple of options that seemed pragmatic in Jan 2021 and discussed the pros and cons of each of them. He was well aware of the consequences on the security scenario in the subcontinent. He accorded the highest priority in each option to the overall national interest, in line with the famous Chetwode credo. Developments in Afghanistan ultimately surprised everyone, primarily on account of the Taliban’s lightening success. Gen Rawat was candid enough to accept that during one of the interactions with the media.

Indo Pacific Region. India’s role in the region and the resultant power play came was discussed in detail. Within the ambit of discussion, Indian defence forces’ role, in particular, the Indian Navy’s role and manner of power projection also got debated. Inevitably, the debate over the third Carrier group vs other assets also received due attention. Gen Rawat appeared to prefer the option of developing India’s island territories to achieve operational advantage primarily on account of economic considerations. He did however, have an open mind towards military diplomacy and power projection through various other means and its importance.

Ex Servicemen. Gen Rawat was seized of the demands of the ESM and well aware of what needed to be done. He emphasised the fact that he is a second-generation officer and hails from an area which proudly boasts of the high density of serving and retired services personnel. He was therefore committed to the cause of welfare of serving soldiers and veterans alike. As the CDS he was also acutely aware of the national imperatives and constraints, it was obvious that it was a tight rope walk for the CDS to maintain a fine balance between rising defence expenditure, expensive modernisation and sustenance and rising aspirations of the personnel. Rapidly changing socio-economic scenario, the value system in the society and maintaining the services social status were adding to the delicate situation.

Modernising the Armed forces. Emerging challenges and technologies constantly make demands on resources, particularly as Indian armed forces are largely equipped with legacy platforms and armaments. General Rawat during the interaction also dwelled upon new concepts of warfare and the evolving security scenario which accentuated the need further. Catering to short, mid and long term requirements of the defence services is resource-heavy. India’s changing socio-economic scenario, impacted by COVID19, a growing young nation with increasing requirements in every sector and the nation’s desire to emerge as a global power does not allow for significantly increased defence budgets. To cope with the situation and extract optimum value from a limited budget, Gen Rawat decided to work on a new approach for capability and capacity development. He seemed like a man in a hurry to set into motion the process of Integrated Capability Development, which would cut down duplication of resources and operational military hardware.

Indigenising, Not Just the Military hardware. Atamanirbharta in defence for Gen Rawat was not just restricted to military platforms, vectors and munitions. He was acutely aware of the legacy that inherited from the ancient Indian cultures and the British Army, and notably the distinction between the two. We had a very interesting discussion on Indian value system, Indian dress culture vis a vis the military culture inherited from the British, its relevance to modern day Indian Military. We got a sense that he was comfortable with the Officers’ mess culture and what goes with it, but was more keen to bring in changes for the troops. Indigenisation had a far deeper connotation for him than mere equipment.

General Bipin Rawat is no longer with us. But his legacy will live on. Many people commented on the fact that India’s TV channels ran 24X7 coverage of his unfortunate accident and farewell for days together, a privilege usually granted to the Head of state or executive. Scenes of mourning the loss across the nation were viral on Social Media. As an aside, I am tempted to mention here that my florist refused to accept money for the wreaths for Gen and Mrs Rawat and instead hurriedly added a bouquet of white lilies from his side. Somewhere, Gen Rawat had touched peoples’ hearts. Twitterati in the neighbouring countries attributed this to his personal integrity and honesty of purpose. Rawat also drew a fair amount of critics’ ire during his five years as a 4-star General, through certain decisions and public comments which did not go down well with the uniformed community. Personally, I think a lot of criticism was on account of a lack of awareness of the vast responsibility handed to him, and his single-minded mission to bring about a change. I found him to be very open-hearted, highly approachable and a very warm and down to earth person – a true son of the soil, devoted to his country.

May his legacy live on

Mrs Madhulika Rawat was s solid pillar of support for General Bipin Rawat. Ever since their marriage in 1985, Mrs Rawat devoted her full attention to raising her family and her obligations as an army wife. A strong believer in treating the troops’ families as part of an extended family, Mrs Rawat took keen interest in creating a supportive environment within the large Army family. As President of the newly launched DWWA, Madhulika Rawat had grand plans to extend support to all the three services’ family welfare associations.

In order to perform effectively in an onerous responsibility like the Chief of Defence Staff, one needs unwavering support from an efficient, diligent and loyal staff. Brig Lakhbinder Lidder, Defence Advisor to Gen Rawat, and Lt Col Harjinder Singh, Gen Rawat’s Staff Officer, performed their jobs admirably. Handpicked by Gen Rawat, the two officers along with MAs from the three services, were always at hand to assist the CDS. Well aware of the fact that their actions reflected upon the CDS, Brig Lidder and Col Harjinder were impeccable with their professional work and personal demeanours. Indian Army has lost two of its bright officers, who had promising careers ahead.

On the fateful day of the accident, they were also accompanied by five PSOs to Gen Rawat, each one of them an outstanding specialist in his discipline. The MI-17 crew was led by Wg Cdr Prithvy Chauhan, CO, 109 Helicopter Unit, with Sqn Ldr –as the co-pilot. What a travesty of fate to lose such dedicated personnel in a sudden crash.

Gp Capt Varun Singh, a survivor from an earlier incident was a test pilot, and a gallantry award winner, was Gen Rawat’s Liaison Officer, representing DSSC Wellington that day. His letter to his school principal written a couple of months ago which exhorts children to be proud of what they are and never to give up has gone viral after the accident. It speaks volumes about the character of the IAF braveheart