Sub Title : I2U2 is a new partnership between the governments of India, Israel, the United Arab Emirates and the United States 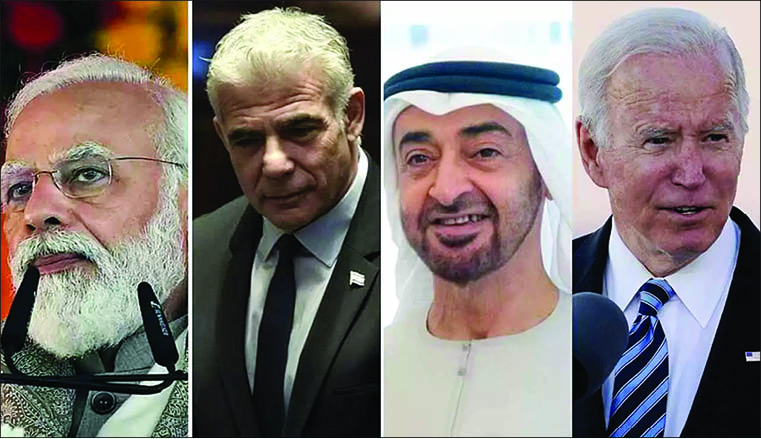 I2U2 is a new partnership between the governments of India, Israel, the United Arab Emirates and the United States. The name denotes the first letters of the names of the four countries. The stated aim of the partnership is to discuss common areas of mutual interest, to strengthen economic partnership in trade and investment in respective regions and beyond.  The partnership has the potential to place India as a pivotal partner and enhance its strategic sphere of influence in the region.

The word ‘Quad’ has a nice ring to it. It conjures images of alliances and power. By contrast, I2U2, the acronym for the proposed coming together of India, Israel, USA and UAE, is a tongue twister. But in spite of its awkward name, the I2U2 has many underlying similarities with Quad. Both these groupings – one focusing on the Indo-Pacific and the other emerging in West Asia – have the potential to place India as a pivotal partner and enhance its strategic sphere of influence in both the regions.

Like Quad before it, I2U2 had an innocuous beginning. It was conceptualized on 18 October 21, when the Foreign Ministers of the four nations met during the signing of the Abrahams Accord between Israel and Arab nations, to discuss areas of cooperation. In its pre-natal form, it was envisaged as an international economic forum to deal with maritime security, infrastructure and transport in West Asia – especially the crucial sea lanes of the Western Indian Ocean. Its stated aim was ‘to mobilize private sector capital and expertise to modernize infrastructure, low carbon technologies, improve public health and promote critical emerging and green technologies.’ But underlying the economic aspects are strategic concerns about the rise of Iran and the growing influence of China in the region and the need to keep it free from potential disruptions.

The I2U2, though in a fledging form, signals an emerging power bloc in West Asia. Although Saudi Arabia is not part of the I2U2, (and is not party to the Abrahams Accord), it is the silent, behind-the-scenes player, whose stance will determine the direction that I2U2 takes. UAE would not have become part of this initiative without its tacit approval, and in all probability will carry forward its agenda.  It has been the UAE that was one of the most enthusiastic partners and viewed the alliance as evolving into a larger strategic and economic compact. In fact, the term ‘West Asian Quad’ was first articulated by Ahmad Albanna, UAE’s ambassador to India.

I2U2 offers Israel, a forum to align itself even more closely with the Arab world. After the signing of the Abrahams Accord with UAE, Morocco and Bahrain, it has been gradually integrated with the Arab nations of the region and recognized as a major power – economically, technologically and strategically.  Its technological prowess and the military strength that it provides can balance the region and help wean Arab economies away from oil and towards technologically oriented domains. It could also help balance the disruptions in the region caused by Iran’s proxies – the Houthis in Yemen, the Shia militia in Syria, Hezbollah in Lebanon and the Hamas in West Bank.

For USA, this offers an opportunity to reassert its influence in the region – something that has been gradually eroded over the past decade or so. It also allows it to position itself between the Arab nations and Israel and provide the heft for the two former adversaries to work together. It also enables it to build bridges with the Arab world (especially Saudi, which was alienated by Joe Biden’s ill-advised statements) and provides an alliance that can balance the growing influence of Iran and China in the region.

India is uniquely positioned to be the cementing factor in this relationship. For a change, our proactive foreign policy has seen a pronounced leaning towards Israel, while at the same time maintaining close ties with the Arab world. In spite of hiccups, like ill-pronounced statements, our ties with the Arab world are stronger than ever before. We can actually help bring Israel and the Arab world closer and iron out any friction that could exist. Even more significant, India has good ties with Iran, and with the development of the Chahbahar port, the economic and strategic linkages with Iran have increased as well. The I2U2 grouping, now allows us to strengthen our influence in the vital Middle East, both economically and strategically, and become a partner in the region.

The Summit and Beyond

The virtual summit that took place between Joe Biden, Prime Minister Narendra Modi, Israeli Prime Minister YairLapid (who as Foreign Minister was one of the key architects of the grouping) and UAE President Mohammed Bin Zayed, was significant in two aspects – the time and the place. The first meeting between heads of states took place a mere nine months after the concept of I2U2 was articulated – a far cry from the ten years it took for Quad leaders to meet (largely due to Indian hesitancy). The other significant fact is that President Biden conducted the virtual meet while in Israel, just prior to his departure to Riyadh, in an act that was laced with symbolism of the coming together of the region.

The importance that the US itself gives this grouping was articulated by US NSA, Jake Sullivan who called I2U2 as “a central feature of US West Asia policy, just as Quad is a central pillar of US strategy in the Indo-Pacific.”

And yes, there were immediate takeaways. The meet focused on the two most pressing contemporary challenges – food and energy security. The UAE pledged an investment of $2 Billion for creating integrated food parks in India, with USA and Israel providing the expertise and technology. Another $330 million was provided for a 333MW hybrid renewable energy project in Gujarat. This is the first step in the development of a ‘food corridor’ between India and UAE, through which India would provide food resources to the Middle East and enable UAE to hold food reserves within India. The disruption caused by the Ukraine War has brought out the need for food security and India is optimally positioned to be a reliable food supplier to the region. Concurrently, this will also enhance the energy security for India in a win-win situation for all sides.

Harnessing the resources, capital and know-how of four diverse countries -each with their own strengths and capabilities –  will enable the development of Infrastructure projects in the region and beyond. The financial implosion of nations that have fallen prey to the predatory financing of  China’s BRI, has brought out its dangers and the need for viable alternatives. Along with Quad in the Indo-Pacific, the I2U2 nations could help create reliable and transparent alternatives that would also reduce Chinese influence in this critical part of the world.

All four nations have taken great pains to specify that I2U2 is not an Anti-Iran, or Anti-China grouping and “is not directed at any nation.” But it could well provide the security forum which can balance their belligerence in the region. Like Quad before it, it could evolve into an all-encompassing security architecture, beginning with food, water and energy security and then covering transportation and regional connectivity (including the critical waterways) and perhaps even counter terrorism and intelligence sharing.  It could also incorporate naval exercises at a later juncture. All that is on the cards. A good start has been made, but the momentum must be maintained, and for that all four nations need to follow up on the deliverables.

For India, I2U2 is a unique opportunity to position itself in West Asia and the Middle East. We already have separate pacts with UAE and Israel, but this is the first regional grouping we are part of. It provides scope for investments, enables access to technology and capital and can significantly enhance our food exports and energy security. It also gives us a distinctive imprint in the region. After decades of hesitancy, our Middle East policy has finally become more pro-active and it is paying off. This alliance, though in a fledging state, has the potential to evolve into a West Asian Quad and helps ensure our economic and strategic interests in the vital region.