Sub Title : A practical proposal from Saab for making the Gripen and other fighter aircraft 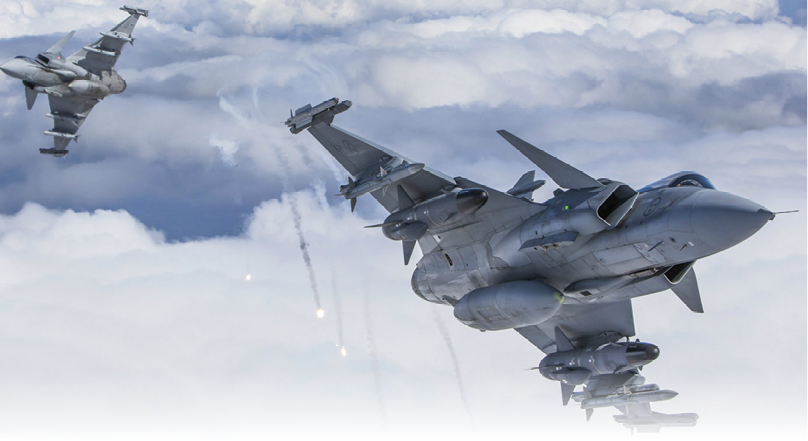 India’s quest for self-reliance is critically dependent on technological know-how and know why. For long, India has tried to ramp up its technological capability in defence by tying up transfer of technology with large scale orders. The challenge is to build domestic capability without foregoing cutting-edge systems and building this capability will require international industrial partners with state-of-the-art technology that can establish themselves in India and thereby know-how and know-why can be transferred to India. If successfully executed, such programs should give significant spillover of technology to non-defence sectors.

The announcement made by the Indian finance minister on hiking FDI in the defence sector through the automatic route to 74 percent is very welcome and is fully in line with our thinking of how enhancement of indigenous capabilities should be executed and achieved. We hope that this is extended to all major programs, including those under the Strategic Partnership format. Such a move will provide Original Equipment Manufacturers (OEMs) the control necessary to invest and establish a company in India that would meet the requirements of both, the Indian government and the OEM. As far as Saab is concerned, such a company would be an Indian legal entity, paying taxes in India, employing Indian engineers and technicians, creating indigenous capabilities and jobs within Indian defence and aerospace industry.

SAAB has laid out a dual-track path. Saab proposal delivers the perfect fighter for India’s current and future needs. It furthermore supports India´s ambition for stronger indigenous capabilities and self-reliance with latest technologies for development and production of future fighters, like the AMCA. INAC is the acronym for Indian Aircraft Company, Saab’s working name for the advanced industrial body we propose to set up as the hub for our full-blown industrial approach to Gripen for India. INAC will perform final assembly and delivery of the 96 aircraft to be produced in India out of the total order for 114 aircraft, as well as MRO (Maintenance Repair and Overhaul), design, development and upgradation of software and hardware, and have long term capability for integration of new sensors and weapons. INAC will be an integral part of our global industrial system for Gripen, working closely together with our operations in Sweden and Brazil.

The diversified ecosystem of Indian suppliers supplying to INAC will consist of small and medium enterprises that supply structural parts, structural assemblies as well as performing development and production of hardware and software for flight critical and tactical systems such as engine, radar, avionics etc. The role of INAC is therefore also to be the hub in our ecosystem of Indian suppliers, to secure a high percentage of indigenous content in the products we deliver to India and, also, plan to export out of India. We are the only manufacturer in the competition prepared to offer such extensive transfer for the long-term benefit of India. This will further enable India to be self-reliant in defence and aerospace, and through INAC, the Gripen program for India will be able to act as a true partner to ADA and DRDO in the development and production of future fighters.

We are doing this as of today in Brazil in the contract for 36 Gripen E and there are many similarities between what we are doing in Brazil and what we plan to do in India. The objectives laid down by the two countries are alike in many areas, but the time and place for the involvement of each of them in the Gripen program is different. Due to their early selection of the Gripen E and Gripen F, Brazil has played a major role in the development of the twin-seat version: the Gripen F. Embraer is our main partner in Brazil and they will conduct the final assembly of the Gripen. We have also set up our own Saab entity, Saab Aeronáutica Montagens for structural assembly in Brazil. And we’re also supporting Brazilian self-reliance in defence and aerospace by helping to develop capabilities for future generation aircraft, as part of our responsibilities under the Gripen contract. But the key difference lies in the sheer magnitude of the order. The opportunity to deliver Gripen to India will give us a substantial time-frame to generate large volumes. This will create a large number of possibilities to indigenise more of the product and have a broader long-term engagement with the Indian supply chain. In addition, our international partners will have a much deeper and broader engagement in India than what they currently have in Brazil. That’s why, the Indian supply chain will be far more involved in production, MRO and even the development of tactical, as well as, flight critical systems such as engine, radar and EW system. Saab has already established provisional agreements regarding airframe parts with key Indian suppliers and we are working to reach the same level of confidence with our potential systems suppliers. In turn, our main international partners are working very closely with us to either further develop their existing Indian supply chain or establish new relationships with Indian suppliers to meet those requirements.

INAC will be an integral part of our global industrial systems, together with our operations in Sweden and Brazil. This will include possibilities for export out of India and we will use the ecosystem with INAC as a hub for development and production for the export market. We believe INAC should be a long-term engagement because it will take extensive effort on our part, and that of the Indian government, to establish INAC. Not only integration with our global operations, we also invite the Indian government to consider INAC as a participant candidate for its future fighter aircraft development program, since it will be an Indian-based operation.

The approach for INAC is the perfect recipe to fuel India’s indigenous ambitions with state-of-the art expertise. The aircraft produced will meet India’s needs, as well as for exports, while enabling a higher ratio of indigenous content and industrial benefits than any of the other competitors of the Indian MRCA programme. It will help India achieve its ambitious objectives and establish the capabilities it needs for self-reliance in defence supplies for its armed forces to accomplish these objectives.