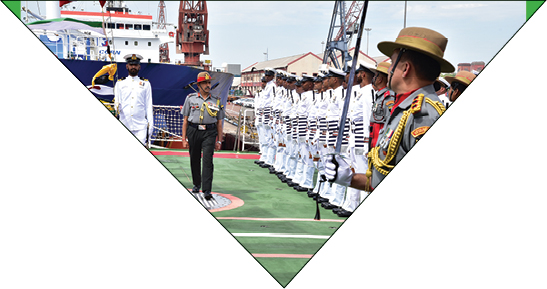 Assam Rifles and the  Indian Coast Guard,  the two premier Border Guarding Forces of the nation were formally affiliated with each other on 22 May 2019 in Shillong, at the HQ DG ASSAM RIFLES location in Laitkor.

Assam Rifles is  the oldest Paramilitary Force of the country and traces its lineage back to a paramilitary police force called Cachar Levy, that was formed under the British in 1835. Since then the Assam Rifles has undergone a number of name changes – the Assam Frontier Police (1883), the Assam Military Police (1891) and Eastern Bengal and Assam Military Police (1913) – before finally becoming the Assam Rifles in 1917. Through the years Assam Rifles has rendered yeoman service- prior to independence the Assam Rifles served in a number of roles including combat roles during the two great wars and thereafter they have been guarding the Indo Myanmar border, conducting counter insurgency operations in the North East and last but not the least rendering commendable humanitarian assistance in the region.

The idea of the Coast Guard was sown in the late 1960s when sea-borne smuggling of goods was threatening India’s domestic economy. The Indian Customs Department frequently called for the Indian Navy’s assistance for patrolling and interception in the anti-smuggling effort. By 1973, India had started a programme to acquire equipment and started deputing personnel from the Indian Navy for anti-smuggling and law enforcement tasks. An interim Indian Coast Guard came into being on 1 February 1977, equipped with two small corvettes and five patrol boats, transferred from the Navy. The Coast Guard Act, which was passed by India’s Parliament on 18 August 1978 formalised the creation of the Coast Guard. The Coast Guard has done a very commendable job guarding India’s Coastal Frontiers.

A Reciprocal Affiliation ceremony was held on 11 June 2019 onboard the Indian Coast Guard Ship ‘Shaurya’ at Chennai. This ceremony was preceded by  presentation of a  Joint ‘Guard of Honour’ to Lt Gen SukhdeepSangwan, SM**, the Director General Assam Rifles followed by reading of the Charter of Affiliation and release of a Special Postal Cover through Postmaster General, Chennai. The  Additional Director General of Indian Coast Guard, Shri VSR Murthy, PTM, TM was also present.

This initiative will facilitate greater understanding of each other’s operational ethos, sharing of best practices, building camaraderie and utilization of combined assets for operations, training, sports and adventure. This would help both the forces to fruitfully exploit each other’s expertise in times of need.

Both the Director Generals are grateful to the MoD and MHA for facilitating the affiliation.