Almerio Brings Innovation to The Fore

Chandigarh based Almerio Defence and Aerospace is the classic example of a defence start-up which has successfully designed and developed technologies and products which are of immense use to the uniformed community as they provide simple and innovative solutions to day to day issues. Like in the case of a number of successful start-ups globally, Almerio’s team is a bunch of enthusiastic engineers and technocrats who have pooled in their experience, imagination and technical skills to create some high utility products and machines. These products will add efficiency, save costs and add immensely to the operational readiness of our armed forces and police organisations. Some of the products are discussed briefly:

Modern weapons are sophisticated, highly accurate and have delicate and sensitive components, thus requiring best in class in storage and management systems. Currently the process is mostly manual and uses storage solutions which have outlived their utility and are not compatible with modern weaponry. The kind of storage ranges from simple wooden racks to metal Almirahs and trunks.  For inventory control, issuance and receipts etc, manual registries are maintained. Auditing is cumbersome, time consuming hence less frequent. Even to trace a single weapon, the entire stock may need to be searched creating huge time loss as well as errors. Manhours spent on such mundane issues can be better utilised for operational tasks.

Almerio Weapon Management System uses the latest technology in weapon storage and inventory management which will result in better security, efficient management and inventory of weapons. There will be a significant increase in the effective utilization of weapons as well as the traceability and accountability in the overall system. The goal is to make underlying processes technology driven so the human interface is minimised resulting in lesser mistakes and omissions, thus, minimising chances of pilferage and misuse of weapons while increasing their life.

ALMERIO Weapon Management System is an innovation to store maximum number of weapons of different calibres, models and sizes in CRCA powder coated secured, rolling enclosures. It protects the weapons from unauthorized access, dust, pests and environmental elements. It is a technology which saves space and efficiently manages more than three times the stores than the conventional storage in the same amount of storage space. It’s ideal for units and subunits where weapons can be securely stored and assigned to units with an option of mobility and transport.

The storage, handling and use of Military explosives are prone to cause inherent risk to persons and property. Hence, Explosive Safety Regulations must be followed for Military explosives to avoid damage due to an accidental explosion. As per the Orange book issued by UN on Transportation of Dangerous goods, International System of Classification has been made to promote the safe transport of dangerous goods and its use has since been extended almost universally for control of storage and manufacture as well. The basis of the system is the classification of goods by the type of hazard involved. Presently Grenades are stored in boxes as specified in explosive safety regulations and further stored in a building with following specifications as per DoD US and STEC regulations, India: a) Thickness of walls should be 45 Cm RCC or 68 Cm brick. b) Safety Distance from other buildings will be based on the Net explosive Content that can be stored in the building and 180 to 200 m is the minimum distance from office buildings, residential buildings etc. This distance has been specified to avoid any damage to property and people.c) The storage building needs to be provided with approved type of electric fitments, lightening protection etc. Security is also required for such a facility. Periodic maintenance is also necessary.

Almerio Total Blast Containment Box along with Almerio Unit Risk Boxes  a novel concept to store Grenades in such a way that poses no significant hazard. This implies that HD 1.2 can be taken as HD 1.4 using this concept. When these boxes are employed, the hazard reduces to 1.4 which means the magazine can be placed at any suitable place without any safety distance requirements.

Almerio Total Blast Containment Box that can be safely stored near buildings, roadways and other magazines thus eliminating time consuming travel to and from an ammo supply point. With the limited arc design, explosives are stored in specially designed containers in the magazine which prevent sympathetic detonation. This limits the maximum credible event to only one round and the magazine is proven to withstand this event, thereby reducing the quantity distance arc.

These can easily be deployed by paramilitary forces like CRPF, CISF, BSF, RPF etc for containing explosives found at public sites or near  border areas . Further Indian Navy and Indian Army can use it for easy and quick storage and transportation of live ammunition as there is no need to either store fuses separately or to wait for explosive vans which have large waiting periods.

QUICK TURNAROUND: Delivered on time and ready for use

PORTABLE: Easy to move with a forklift or small crane & can be relocated to new job sites.

The explosives’ safety originated in the aftermath of World War I when several ammunition storage areas were destroyed in a series of mishaps. Hence Explosive Safety Regulations must be followed for military explosives to avoid damage due to an accidental explosion. As per the Orange book issued by the UN on ‘Transportation of Dangerous goods’, International System of Classification has been made to promote the safe transport of dangerous goods and its use has since been extended almost universally for control of storage and manufacture as well. Many researchers and inventors have worked on it and have developed some related works but they are lacking in design and missing some features due to which explosives are prone to the risk of mass explosion.

Almerio Portable Earth Covered Magazines are the need of the hour at places where large quantities of our ammunition are lying in open or under unsafe conditions. These Portable Earth Covered Magazines (ECM) work on Unit Risk Principle in which the donor (or potential explosion site) to the acceptor igloo (or exposed site) are prescribed in terms of clear distances from the nearest surfaces of each ECM. These are termed the inter-magazine distance. The donor break up during explosion to contain minimum debris size and distance and it directs blast/fragments in the upward direction while the Acceptor is designed to sustain blast /fragment loads. It may undergo large plastic deformations and in the Acceptor unit no sympathetic or delayed detonations will be felt. Further, the portable ECM has reduced the inter se distance as compared to RCC box structure because of its  ductile mild steel structure.

These magazines can be configured with a wide range of options to accommodate specific applications. These magazines are specifically engineered with the required strength necessary to support two feet of earth cover. Outer shell is coated with Line-X to provide added protection against moisture. Bullet resistant ventilation is provided in the door to allow air flow into the unit. Interior is lined with kiln dried military grade hardwoods. Floor systems are heavily reinforced. This magazine is delivered on time and can be operational within hours of delivery. Further they are completely modular in nature and can be extended in dimensions at any given point of time, thereby saving additional capital costs of construction. PECMs  are transportable through land and air to any kind of terrain and can be easily relocated at any time, thereby saving resources. 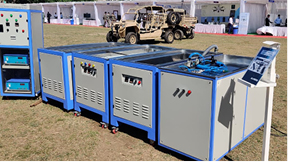 It is very difficult to maintain small weapons in a good state as  stored weapons have lots of thick oil deposits inside and also on the outer surface of the barrel. Sometimes surface deposits of lead, copper, carbon, sulphur, burn phosphorus etc. are found as a build-up on the firing bore. The stored weapons area in charge is no way responsible for the cleaning of the available weapons thus, at the time of emergency issuance and usage of the weapon as and when needed, weapon may or may not being good healthy condition. Most of the times cleaning is left to the user who may or may not perform the requisite task at proper intervals resulting in damage to the weapon. Manual cleaning process also takes lot of time in cleaning and serviceability of the stored weapons remains doubtful.

Almerio Small Arms Barrel Cleaning System is a revolutionary product that aims at cleaning weapons thoroughly through an electronic automated process. This is based on the cavitation effect caused by high frequency electronic  wave vibration signal in a fluid. Microscopic bubbles are formed, and then implode violently causing the cavitation which create an intense scrubbing action on the surface of the item being cleaned. The bubbles are small enough to penetrate microscopic areas, cleaning them thoroughly and consistently. Almerio electronic cleaning is extremely effective at removing dirt and grime which would normally require tedious manual cleaning by hand.

Compared with traditional solvent/scrubbing, these cleaners:

Small arms ranges are designed to provide safe places to learn and practice shooting skills for law enforcement, military and recreational shooters. In India such ranges are often built, maintained and operated as indoor ranges or the conventional outdoor ranges by Police, Military and Sports academies for training their personnel according to their specific need and purpose.

Conventional Small Arms Firing Ranges require lot of danger areas to avoid any injury due to misdirected/ricocheted bullets. As per an estimate, more than 230 hectares area is required for a conventional firing range. Such ranges are generally located at far off distances (forest area) with no other facilities at site. It is also very difficult to clear the danger area from people and many incidents still occur during live firing practices. Logistics is also a big issue for a conventional range and regular practice is not possible which hampers the training of shooters.

ALMERIO Portable Firing Range is a secure modular range ready for live firing. It is a pre-engineered, portable, modular and baffle firing range that comprises shipping container, robust baffle system, HEPA filtration and ventilation units, HVAC system, bio metric access control, and high-quality ceiling guards. The system uses containers which are made of ballistic steel. The system is environmentally safe from lead and noise pollution. The system provides multi lane shooting range with no stray bullet scare. It is flexible in nature and can be expanded as per the requirement. This system can have multiple lanes for the shooters which can be expanded as per the user requirement for up to 300m in range. The baffle range can be easily redeployed and moved to any location at minimal cost and time.