Sub Title : Significance of the conflict - strategic as well as military 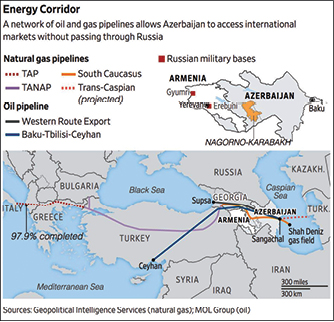 The Nagorno-Karabakh conflict is an ethnic and territorial conflict between Armenia and Azerbaijan. Both countries were once part of the USSR. Azerbaijan is a Muslim-majority country while Christians live in large numbers in Armenia.

A fierce battle has started between the two Central Asian countries. Experts believe that there is a huge possibility of this war taking a bigger form with Russia getting involved. Russia supports Armenia while Turkey is supporting the Muslim country Azerbaijan. It is reported that Turkey and Pakistan are already sending terrorists to fight on behalf of Azerbaijan. There is a danger of Russia, Turkey, France, Iran, and Israel all of whom have commercial interests in the East Mediterranean, which abounds in hydrocarbons getting involved in the conflict. In addition to eying geo strategic opportunities they also have religious and historical affiliations.

Azerbaijan describes the mountainous region as its own, while Armenia has its occupation. The area has been under Armenia’s occupation since their last major war ended in 1994. In 2016 too, there was a bloody violation of the Cease Fire in which 200 people were killed.

The Nagorno-Karabakh region is de facto controlled by the self-declared Republic of Artsakh but is internationally recognized as de jure part of Azerbaijan. The conflict has its origins in the early 20th century. Under the Soviet Union, Joseph Stalin decided to make the Nagorno-Karabakh region an autonomous part of Soviet Azerbaijan. The present conflict began in 1988, when the Karabakh Armenians demanded that Karabakh be transferred from Soviet Azerbaijan to Soviet Armenia. The conflict escalated into a full-scale war in the early 1990s. Some 30,000 died in the conflict, which also displaced around 1 million before a cease-fire in 1994. Since then, Nagorno-Karabakh has remained a breakaway region inside Azerbaijan.

There is a local leadership in Nagorno-Karabakh, but the territory, home to about 150,000 people, relies on Armenia for financial support.

Long-running negotiations mediated by Russia, the United States and France (The Minsk Group) have seen little progress, and there have been periodic clashes on the region’s borders.

A ceasefire signed in 1994 provided for two decades of relative stability, which significantly deteriorated along with Azerbaijan’s increasing frustration with the status quo, at odds with Armenia’s efforts to cement it. A four-day escalation in April 2016 became the deadliest ceasefire violation till the recent conflict.

Azerbaijan has repeatedly accused the Minsk Group of being pro-Armenian. Azerbaijan’s strongest diplomatic supporters are Turkey, Pakistan and the nations of the Organisation of Islamic Cooperation (OIC) and the Turkic Council. Azerbaijan also receives diplomatic support Ukraine, Georgia, and Moldova. These three countries and Azerbaijan form the GUAM organization for economic and democratic development. Two other post-Soviet states, Kazakhstan and Belarus tacitly support Azerbaijan’s position, especially within the Eurasian Economic Union (EEU) and the Collective Security Treaty Organization (CSTO), Both Palestine and Israel have voiced support for Azerbaijan.

Reason for the Conflict

Tensions between the two sides simmered over the summer, spilling into deadly clashes in July, which led to recent hostilities. The escalation in July was perceived to be a setback for Azerbaijan, which lost a high-profile general in the fighting. Sunday’s (27 Sep 20) clashes and the follow up could be an attempt by Azerbaijan to save face.

Turkey has cultural, economic and religious ties with Azerbaijan, and the two nations have also held large military exercises in July and August. On 26 Sep 2020, Turkey’s president, Recep Tayyip Erdogan stated that his country would stand with “brother Azerbaijan with all its resources and heart.” Turkey is a large defence industry and would be keen for new markets. Turkey is also accused of sending fighters from Syria to Azerbaijan, while Pakistan too has come into the news for sending terrorists to the war front and in an apparent bid to bolster Azerbaijan’s military. Azerbaijan’ military ties with Israel are no secret, who has reportedly sent an urgent shipment of military hardware to the beleaguered state.

Armenia alleged that one of its warplanes (SU25) was shot down by a Turkish fighter jet (F16), killing the pilot, but Ankara has denied any involvement. Coming to Armenia’s aid is France who has a large number of Armenians living in the country. France enjoys good political relations with Armenia and may not hesitate to restore military balance. Armenia’s other supporter can be its neighbour Iran.

Russia has remained the most active player in the conflict so far, and the main mediator. Russia wants to retain its influence over both and keep outsiders like Turkey out. Russia though non-aligned at this point in time may be inclined to go the Armenian way if the conflict widens in scope.

Other nations like the US are presently reported to be sitting back and calling for an end to the hostilities.

An all-out war involving Russia and Turkey; this would destabilize the South Caucasus region – Armenia, Azerbaijan and Georgia – which serves as a corridor for pipelines transporting oil and gas to world markets. Many of the oil and gas pipelines run quite close to the present front line, just a few kilometers away. Other nations in the East Mediterranean region then are likely to take opposing sides to protect their economic interests and hydrocarbon assets.

There is no clarity on the total number of casualties so far. However scores of troops and civilian death have been reported amidst reports of artillery duels. There are also reports of a number of tanks and armoured vehicles having been destroyed. There is evidence of an increased use of UAVs and armed drones. Use of Turkish Bayraktar UAVs which was earlier used to caused casualties to Syrian armour and artillery is raising concerns amongst the international community. Military experts are also keenly watching the effect of modern technologies in this conflict.

At the time of going to press the latest report quoting Kremlin states that Russian President Vladimir Putin and his French counterpart Emmanuel Macron have called for an immediate ceasefire. The official death toll in the bloody armed conflict has crossed 100 and the warring parties said that they would continue fighting.