Sub Title : It is essential that Attack Helicopters are intrinsic to these organisations 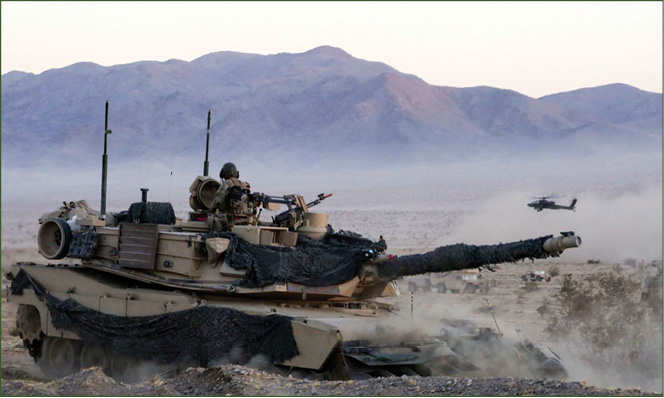 As a part of its restructuring process the Indian Army is forming Integrated Battle Groups. It is essential that Attack Helicopters are intrinsic to these organisations. To exploit the full potential of these machines they must operate in sync and concert with the mechanised forces, with each complementing  the capabilities of the other

Force modernisation, force restructuring and force doctrine are complementary and mutually reinforcing aspects of military capability building. Basis changes in the strategic environment, prevailing and future threats and required combat readiness the Indian Army is continually in the process of modernisation with restructuring and doctrinal reviews being carried out periodically . One such ongoing review is the creation of empowered Integrated Battle Groups (IBGs) suitably structured for the Western and Northern borders, with rapid deployment capability in time and combat overmatch capability in chosen spaces.

The operational effectiveness of a force depends on its ‘Deployability’ in terms of time and terrain, ‘Employability’ across the entire spectrum of conflict and ‘Capability’ to ensure combat overmatch.  Thus, the need for a rapidly deployable, versatile, lethal, survivable force to dominate the key operational factors of ‘Time-Space-Force-Information’.

The IBG concept is based on three foundational doctrinal constructs of the Indian Army viz Manoeuvre Warfare, Directive Style of Command and Combined Arms Force, as a war fighting philosophy. Rapid rate of mounting tempo and overwhelming execution tempo to overcome force and terrain friction for favourable outcomes across the entire spectrum of conflict will be the hallmark of IBG application. This requires integrated approach to all dimensions of force restructuring and warfighting. The focus has rightly shifted from coordinating the individual actions of separate arms and weapon systems, to gaining greater synergy and integration between them by combining their complementary actions in the form of an IBG under a single commander.

Attack helicopters are offensive weapon systems critical for empowering IBGs to win battles at least cost and in minimum time. To be successful, the attack helicopter must be integrated into the ground commander’s scheme of manoeuvre. State of the art Attack Helicopter (AH) fleet such as newly acquired AH-64E as part of Army Attack Aviation (Army Aviation with attack capability) with contemporary weapon systems, absolute night fighting capability and interoperability with mechanised forces are a pre-requisite for potent combined arms manoeuvre. It is important to note that AH operate in a battlefield environment as part of a combined arms team for optimum effect and not in isolation as happened in the First Iraq War with disastrous consequences for the fleet of Apaches. The lessons were well learnt with their effective employment in the Second Iraq War and Afghanistan, with positive results. The Indian operational matrix has unfortunately lacked institutional outlook to this aerial dimension of manoeuvre being integral to our warfighting force structure. It is only in recent times, post the Kargil review, that the importance of Army Attack Aviation came to the fore. This along with operational challenges of future wars in the Indian context, should be the basic edifice of doctrinal review, restructuring and training for IBGs based on a combined arms philosophy.

All major armies of the world including our adversaries China and Pakistan have a full-fledged Army Aviation Corps, consisting of all types of helicopters including AH. It is therefore surprising that the world’s third largest standing army, which has unresolved and active borders with both China and Pakistan and has fought wars with both these countries, continues to be denied a viable and operational Attack Aviation for reasons other than professional. The present allocation cleared by DAC for six AH-64 E to Army and 22 to IAF is only symbolic and more to balance turf issues than operational logic.

What makes IBGs so potent is not the physical employment of multiple arms on the battlefield but the cumulative, integrated and complementary effect, targeting the enemy’s will and capability to resist, and his inability to effectively respond. IBGs must be seen in a multidimensional force application mode including intrinsic Army Attack Aviation, C5ISR and battle space awareness. The combat effectiveness of integrated structure must be a factor of  frequency of interaction, integrated training, interoperability, synergy, complementarity in range and mobility, competence of commanders to synchronise their effect, and rapid deployment ability.

AH as an aerial arm of manoeuvre in the third-dimension mandates total integration with mechanised forces in terms of organization structures, training and operational tasking. A dedicated Attack Aviation asset for each IBG would arm the ground air manoeuvre continuum. But at the same time an attack helicopter must not to be mistaken for a ‘flying tank’. Operations with mechanised forces imply operations in close co-ordination and conjunction with mechanised forces. The attack helicopters have a well- defined concept of operations and tactics to enable their employment complementing the mechanised forces. Under all circumstances, their command and control is best suited to be with the IBG commander as part of his intrinsic force structure. The future doctrinal construct of IBGs and their employment must factor in this aspect.

The primary mission of army aviation is to fight the land battle and support ground operations, operating in the tactical battlefield as a part of a combined arms team expanding the ground commander’s battlefield in space and time. Modern helicopters have bridged the gap between the ground forces and the air arm of battle. With lethal AHs operating in the tactical arena, the marriage of ground forces and AH is essential for success in future battlespace.

Turf battles for ownership of AH Helicopters are obviously devoid of reason and betray lack of professional approach to war fighting. For dominating the tactical battle space of the 21st century, the roles that Army Attack Aviation needs to perform in support of land battle requires equipment, personnel, aircrew and organisations that enhance the overall capabilities of the land forces commander. The operational diversities of our threat cum capability construct coupled with diversity of terrain  underline the need for integral state of art, modern technology AH capable of operating both by day and night in a complex battlefield environment of future. The need is for dedicated aircrew who are not only proficient in flying but are associated full time with army manoeuvres, operational thinking and ground tactics, as well as spend time in the field. The present system of AH coming in from Air Force is not suited for the short, swift and limited wars envisaged in the future. Unlike the Air Force, the army aviation units and helicopters are located closer to their operational areas and along with the formations affiliated to, especially at the Corps level. During war these units will require to operate from forward composite aviation bases, catering for security, maintenance, fuelling and arming facilities. The employment philosophy dictates the need to develop organisations that enhance aviation capabilities to support the concept of operations of field commanders and be tailored to meet the evolving operational requirements-hence the concept of integral Army Attack Aviation for IBGs.

Army Attack Aviation must in turn review structures, manning, training and define doctrinal constructs as part of IBGs that explores the attack helicopter employment in a contemporary operational environment. In order to maintain the advantage, aviation training must be directed toward the training of individuals, crews, and units as intrinsic to manoeuvre warfare. Also, aviation training must be realistic and flexible. It may be prudent to reorient the School of Armour Warfare at Ahmednagar to School of Manoeuvre Warfare and align the tactical training of AH pilots along with other complements of battlespace manoeuvre. The attack aviation AH assets required for the above manoeuvre, must also be piloted by army aviators with initial background and experience in mechanised warfare, who fully understand the ground situation. This will ensure the optimum utilization of this battle winning resource. Mechanised Forces officers could also be given the option to qualify and serve as AH pilots for better integration. Location of some attack aviation assets in proximity of Armour School and IBG locations for integrated training, would accrue tremendous advantage for both peacetime integration and operational employment. There would also be the need for IBG formations and commanders to ensure seamless interoperability and refine SOPs for optimised employment. Finally, the success of IBGs will depend not only in its structure but also on how it is empowered, trained and kitted to fight and win future conflicts. AH will be critical to the success of IBGs in future conflicts.