Sub Title : Self-reliance in defence implies a successful collaborative approach and not isolation 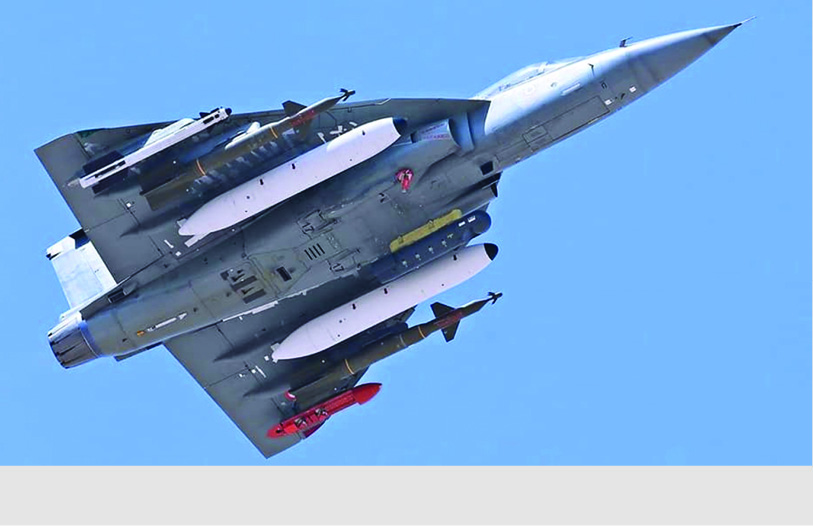 The Atmanirbhar Bharat story for the Indian Armed Forces has to be well thought through and implemented carefully. Only then will we be able to achieve the intended end. At no stage must our enthusiasm for the process leave our flanks uncovered

That India is focussed on Atamanirbharta  or self-reliance in defence is evident from the continual efforts of the government to usher in reforms in the defence sector including providing additional funds to the extent feasible. The total defence budget (excluding defence pensions) for FY 2022-23 amounts to USD 54.20 billion (INR 4,05,470.15 crores). Modernisation of military forces is primarily driven by the capital outlay within each year’s budget which is USD 20.36 billion (INR 152369.61 crores) for this FY. The current capital budget  in INR terms is 12.81 % higher than that of 2021-22.

There is an increased allocation to the domestic industry and a whopping 1 lac crore plus will be infused into the Indian defence ecosystem. This is great news for a dynamic and developing defence industry. Indian industry has come of age from just 37 industrial licences in 2006 to more than 550 Industrial licences provided till now. Policies have been made industry-friendly, restrictions on industrial licences have been relaxed, exports facilitation has increased tremendously, and the armed forces have stepped out of their offices to connect with the industry that supplies to them. From the Kelkar Committee in 2005 to the corporatisation of the Ordnance Factories, the journey has been one of forward movement, the idea being to enhance production efficiencies and make a mark in defence production.

The present dispensation has recognised the need for a young nation such as India to step forward and take a leap into creating and sustaining jobs, while judiciously investing in strategic sectors. Towards this end, the announcement of creating two Defence Industrial Corridors is a huge step in the right direction. The government had announced in the budget of 2018 and subsequently in the budget of 2019 an allocation of INR 3000 crs, to facilitate the population in the corridors.

Now the government has come up with the idea of infusing more than 1 lac crores into the indigenous industry. Creating an umbrella testing and certification infrastructure, investment by the defence public sector units in the corridors and aggressive marketing by the state governments are bringing in the necessary momentum to the idea of Defence Industry corridors. A capability and capacity assessment of the Indian industry provides us with many positives, such as a mushrooming UAV industry  – it seems as though every industrial cluster may have a UAV manufacturing company. Bulletproof armour and such like technologies in the systems space have been mastered by medium scale industries and they also export to more than 100 countries, one such example being Kanpur based MKU.  In munitions, vehicles, technical textiles etc, we are pretty much self-sufficient. Our own technology provider, the Defence Research and Development Organisation(DRDO) has mastered most missile technologies, excelled in the strategic electronics space, designed aircraft and is pretty confident of providing the Indian Airforce with the Advanced Medium Combat Aircraft(AMCA) by 2025. We make our own rifles and small arms and ammunition, we make our own missiles, and in the maritime segment we are indeed pretty strong.

So, in summary, the government is aggressive in having made industry-friendly policies, the industry has shaped up to be able to produce major platforms, DRDO has managed to provide us with the requisite technology, academia is turning out thousands of engineers and skilled workers, the software industry is thrilling the world with huge exports and every indicator is looking good.

In spite of all the song and dance, why is it that we are a nation that imports 65% of the needs of the Armed Forces? Is there a major gap that we have not been able to identify and if identified, have not been able to bridge? Is it not a fact that more than 50% of the so-called 68% allocation to the Indian defence industry is channelled out of the country against imports? Have our DPSUs not been conduits for bringing in foreign technology, systems, hardware and software, all this while and focused only on licenced production. Have we done a system health check-up to identify the Technology Readiness Levels(TRL) and Manufacturing Readiness Levels(MRL)? Do we know where we stand and where we need to go and how the journey needs to be shaped?

It is a hard truth that we as a nation have a plethora of defence systems from various countries, from the erstwhile USSR(which incidentally is still holding the largest sway) to Israel, South Africa, France, Germany, and now, increasingly the USA. What then should be the strategy to identify the key platforms, key systems and then propose a methodology for self-reliance?

Is the Indian industry capable of meeting the challenging technologies and operational requirements of the Indian Armed Forces? Or will the Indian Armed Forces have to live and fight with “what we have”, as was quoted by a former Indian Army chief?  It begs the question, are we merely following a slogan or are we following an inner consciousness to achieve the goal, to make the slogan a reality? It demands firm-footed deliberate movement which will ensure that at any point in time, there is no return to the gloomy days.

In the entire story of Atmanirbhar Bharat and the boost to the domestic industry, we seem to have relegated the capabilities of the Indian Armed Forces, to allow them to adjust to the new normal and possibly “manage” and carry on. It may rather be a good idea for the government to leave it to the Armed forces to identify platforms and systems for self-reliance and chalk out a path towards that goal. Under the circumstances, mere pumping in of money may also result in pumping out of foreign currency, with consequences in technology dependence and knowledge paralysis.

There is a crucial question that comes to mind. Is Atmanirbhar Bharat or a Self-reliant India better or an Inter-dependent India better in these days of collaboration, friendship and mutual co-existence. If, for example, Russia has not used maximum force till now, the only reason one can find is the strength of NATO and EU with strong support from the US. How intimately they can interfere is another question, but that they have actively supported Ukraine, is more relevant.  An associated question is – is it possible for any country in this global village to become super self-reliant?  We must remain alive to the possibility of not becoming isolated in our enthusiastic pursuit of AtmaNirbharta. Nor should we be compromising on the capability of the Indian Armed Forces.

Figure 1 below shows the imports of various platforms and systems into India for the last ten years, from 2010 to 2020: Data Courtesy: Sipri: All figures in millions of dollars

As can be seen from the above, there has been a peak in 2013, with the import bill exceeding USD 5 bn, thereafter there has been a steady decline to an encouraging figure of 1.485 bn in 2018. However, the increase and decrease can be attributed to the type of systems that were imported in that particular year.

For India, the Atmanirbhar Bharat story began in 2015 when Prime Minister Modi identified defence as one of the 25 key sectors that would participate in the development and thereby contribute to the USD 5 Tn economy by 2024. The SIPRI numbers above do not indicate a clear yes or a no, in terms of an understanding of whether our quest for Atmanirbhar Bharat has worked, but it does throw up one sure indicator that this is a slow process. Every step taken needs to be fail-safe and provide a stepping stone for the other steps, else, the entire concept can come a cropper.

The Prime Minister has urged the Indian defence industry to surprise the enemy with Indian made weapons. The story develops at the fundamental levels and must build itself in a structured manner. Sometimes, one feels, as though the system is flawed and one flaw on top of another multiplies the effect. At times, it seems that the bureaucracy, with limited stakes in the defence sector, gets into an overdrive ignoring the fundamentals that drive the sector. Making announcements of a few lists, calling them negative and positive, does not achieve Atmanirbharata. For example, one needs to have a look at the list of 2500 items released by DDP late last year. Do we see items other than washers, screws and bolts on the list? It hardly facilitates Atmanirbharta. It is imperative that one understands the difference between stakeholders and non-stake holders. Those making policies must do so for the furtherance of the objectives of the Indian Armed Forces. The ownership needs to be that of the Indian Armed Forces,  for they know their equipment and systems, they know where the shoe pinches, they know how to strike the balance between capability building, warfighting and Atmanirbhar Bharat.

At the fundamental levels, the Indian Armed Forces need to engage with academia, research institutions, colleges and reach out to the nation, the entire nation is waiting for this. Technology challenges, competitions, extensive participation with innovative young minds and learning for fun, with a spirit of technology infusion is the name of the game. DRDO needs to take a lead from the Forces and focus on those technologies that are needed for warfighting. They need to concentrate at the fundamental levels of technologies at say, TRL(Technology Readiness Levels) of 1 to 5. Forces must redirect their effort to engage the industry from TRL6 upwards towards the realisation of the products that they need, with tweaking as necessary, with complementary efforts from Foreign OEMs, friendly foreign countries, joint military exercises(new products seen and lessons learnt).

In this journey, there would necessarily be a number of challenges, difficulties, need for more funds, need for extra effort from the government, and sometimes trust deficit. This is when, experts, scientists, academics put their effort into one common pool to find solutions. When fundamentals are strong Atmanirbharata will flourish. Let us begin at the raw material levels, find our space in raw materials at least to satisfy our strategic programs. Then we address technologies at various levels. Thereafter, we must build the tempo onto manufacturing and establish Manufacturing Readiness Levels (MRL) in consonance with our TRLs. Adoption of Manufacturing 4.0, for example, has been mentioned in the draft production and export policy. but what happened thereafter? Have any of the DPSUs who have been advised picked up yet- are we satisfied with the progress? Once our fundamentals are in place, we can integrate contemporary technologies like AI, AR, VR, and the entire lot; done in this manner, they would seamlessly integrate into the manufacturing value chain. If, however, we try and do AI without having an adequate MRL, it would be like burdening a weak body with heavy ornaments, the body cannot just withstand it.

The last of the aspects is finance. All of this needs finance, so should it be the first?  No, it has to be the last. Once we have a plan, fundamentals in place and strong processes, finance will happily fund this, since they also know, this is a first-time-right concept.