AVANI- A shot in the arm for Armoured Fighting Vehicles

Sub Title : An impetus to our armoured fighting vehicles programmes 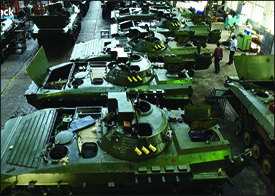 Consequent to the dissolution of the Ordnance Factory Board, seven corporate entities have been created. One of them is the Armoured Vehicles Nigam Limited (AVANI), which is headquartered  inAvadi. This step will give an impetus to our armoured fighting vehicles programmes

“Armoured Vehicles Nigam Limited has the technological capability and manufacturing capacity to equip the Indian Armed Forces with a range of fighting vehicles which suit their current and futuristic operational requirements”   – Sanjeev Kishore, NDC, CMD, AVANI

On Vijayadashami Day 2021 – a day symbolic of the victory of good over evil – Prime Minister Narender Modi created seven new companies out of the Ordnance Factory Board. The decision to convert the two hundred year old institution into seven government owned corporate entities immediately made them sleeker and would help unlock their true potential. This will provide a boost to indigenous defence production and enable India to become truly self-reliant and emerge as a major arms exporter in the region and the world.

Of these, perhaps the most significant is the Armoured Vehicles Nigam Limited (AVANI) which came up formally on 01 October 21 with the amalgamation of five complementary units  – HVF Avadi, Ordnance Factory Medak, Vehicle Factory Jabalpur, Engine Factory Avadi and Machine Tools Prototype Factory Ambarnath.  Each of these deal with the production of armoured fighting vehicles, heavy vehicles, Mine Protected Vehicles wheeled vehicles and their engines and other accessories and their coming together under one entity will synergise all.

The units of AVANI have an order book of Rs 31,000 Crores and an authorised capital of 12500 cr. AVNL group is the principal source for supplies to Indian Defence Forces for indigenously manufactured tanks, infantry combat vehicles, engineering vehicles, self-propelled artillery and a score of variants including bridge laying tanks, mine trawling and ploughing equipment, logistic vehicles and others.

AVANI’s flag ship company is the Heavy Vehicle Factory at Avadi – near Chennai – which was set up in 1961. During past five decades has provided the Indian Army with its first indigenous tank – the venerable VIJAYANT followed by the production of indigenously produced T-72s (AJEYA), T-90s (BHISHMA) and of course our very own MBT ARJUN along with all their variants. The AVNL units have upgraded it manufacturing capacities for manufacturing and overhauling to meet the defence forces requirements.

With strong Order Book Position, AVNL group of companies are moving forward to meet the demands of Indian Defence Forces. In the process of manufacturing and delivering the products, AVNL is also the driver to the Indian Industry as numerous industries are part of supply chain and more and more industries are joining with AVNL group under the outreach efforts made by AVNL.

In house R&D and system upgradation activities at AVNL has given new dimension to self-reliance in development and manufacturing capabilities of AFV in India. In the wake of the tensions along the borders, the HVF plant is also considering development of futuristic combat vehicles and light tanks specifically designed for Indian terrain and conditions along the Line of Control and the Line of Actual Control.

Complementing its capabilities is the Ordnance Factory Medak which has also been amalgamated into AVANI. This plant, established by the then Prime Minister Mrs Gandhi, rolled out its first BMP in 1987 and since then has produced over 3000 infantry combat vehicles at an impressive annual turnover of 100. It is all set to double this capacity which will enable the plant to add to its impressive offering of armoured personnel carriers of different kinds to the army and add to its varied stable of ICVs, mine protected vehicles, reconnaissance vehicles, missile launchers, armoured engineering vehicles, NBC vehicles, logistic and command vehicles and all their variants.

Both these plants depend on the Engine Factory, Avadi, for their powerpacks. Their engines are made and supplied by this highly sophisticated plant that is co-located with the Heavy Vehicle Factory at Avadi. This plant has the high precision wherewithal to make high power diesel engines for BMPs, Ajeya and Bhisma battle tanks, which form the heart of these platforms. The plant boasts of the latest in precision engineering and has sophisticated quality control and quality assurance mechanisms to ensure the production and delivery of world class power packs.

While Armoured Fighting Vehicles are rolling out at an impressive pace due to these institutions, the Vehicle Factory at Jabalpur, similarly provides the Armed Forces with their requirement of light and heavy wheeled vehicles. VFJ produced its first Shaktiman truck under licence from MAN -SE of Germany – and then moved on to produce Nissan Jongas and One Ton Vehicles – a family of vehicles that served soldiers for over 30 years till they gave way to  newer generations of vehicles. The plant also produces specialised vehicles like water bowsers, ambulances, generators, recovery vehicles, field tractors, kitchen vehicles, communication vehicles – virtually every kind that is required in the field.

As it develops its production capabilities and designs our own family of vehicles, it will reduce dependence on foreign defence supplies through internal capabilities. It will also provide a platform for export of defence equipment to friendly neighbourhood countries  and provide them with reliable, effective vehicles that could meet defence requirements now and in the future.