Sub Title : Battles that made History -  Battle honours, are awarded as recognition and to record a unit's active participation in battle against a formed and armed enemy. Units eligible to be awarded such honours are those whose purpose is to close with and defeat, neutralize, or destroy the enemy. 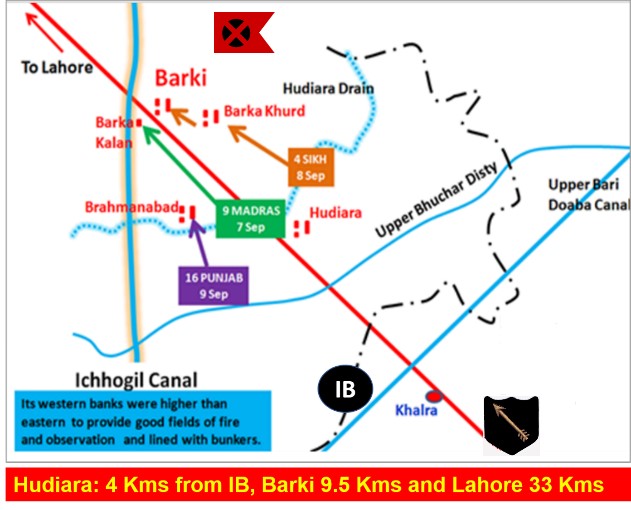 “The Pakistani plan was based on BRB (Ichhogil) Canal which to a great extent compensated for disparity in resources and enabled our formations in the Ravi-Sutlej Corridor to deploy on much extended frontages.” -Commander-in-Chief Pakistan Army, General Musa

Pakistan’s 10 Division was responsible for defence of Lahore from BRB Siphon in North till Bedian in South, 11 Division was responsible for defence of the area from Bedian till Hussainiwala Headworks close to Ferozepur. All these defences were along the Ichhogil Canal built to be an irrigation channel and an anti-tank obstacle to protect Lahore and other areas of East Punjab. Its home banks were higher than the far bank and populated with Machine Gun bunkers to fire on the attackers.

As a part of the 11 Corps Offensive, 7 Infantry Division planned to attack in two phases.

Contesting the Indian Brigade was Pak 103 Infantry Brigade with two battalions and a squadron of tanks covering about 20 Kms of frontage with the Burki Road and Hudiara Siphon crossings of the Ichhogil Canal incl. Pak 10 Infantry Division was supported by a strong Artillery component: a Heavy Regiment consisting of eight 155 mm guns and four 8’’ Howitzers, three medium regiments supporting its three infantry Brigades plus one more medium regiment and two locating batteries.

Initial progress was rapid as no enemy opposition was encountered till the Hudiara Drain where a Pakistani company was holding a delaying position along the Drain. After a short but sharp engagement Hudiara Drain was secured by 6/8 GORKHA Rifles.

5th Battalion, The GUARDS Regiment, with a Squadron CIH under command, launched a day light attack on the Pakistani company holding defences in the area. The defenders, apprehending a threat to their flank and rear and chose to abandon Hudiara Drain after blowing off the bridge.

At this stage in order to retain momentum, 48 Infantry Brigade was ordered to firm-in astride the axis along Hudiara Drain and Engineers ordered to construct a Bailey bridge over Hudiara Drain. This was accomplished with commendable speed by the afternoon of 7 Sep. The bold moves kept the enemy guessing and offset his balance. On the evening of 6 Sep, 65 Infantry Brigade was tasked to advance and capture the bridge over Ichhogil Canal at Barki.

The Strong Point of Barki was well defended from all sides. The village was occupied by a Company of 17 Punjab (Pak) and 12 Punjab (Pak) Regiments. Many houses had been strengthened to be used as pill boxes and the narrow lanes made move of tanks impossible. To the defender, it offered good ambush sites and killing grounds, they made tunnels and communication trenches to move undetected and safely between defended positions. Two companies occupied the West Bank of Ichhogil Canal and prevented any outflanking move. The Strong Point was supported by elements of a Recce and Support Battalion and some tanks. A large number of fire units were placed under command and artillery support assured. Barki was indeed a fortress and though a tough nut, it had to be secured before any assault on the Ichhogil Canal could be attempted.

65 Infantry Brigade supported by CIH less a squadron began its march from a Firm Base established by 16th Battalion, the PUNJAB Regiment at 0500 H on 7 Sep with 9th Battalion, the MADRAS Regiment leading astride the axis KALRA-BARKI. A number of prelim operations were carried out to extend the firm base and break the outer crust of the defences for the final assault on Barki.

The SIKH Regiment assault on BARKI would be supported by CIH less one squadron (about 30 Tanks) and 7 Artillery Brigade (about 54 Artillery Guns).  After capture of BARKI, the battalion was to assist the crossing of the tanks over BARKI drain. The attack began on the night of 10 Sep at 2000 H from the East. The enemy was well aware of the Tactical importance of the Strong Point and fought back resolutely. Heavy artillery fire (over 2500 shells within 45 minutes) failed to deter the Sikhs who moved through the night like ghosts eliminating opposition in every street and house. They however suffered heavy casualties in the process.

A well-positioned Pakistani Machine gun was bringing down effective fire on the attackers. Subedar Ajit Singh of a leading platoon was tasked to destroy the Machine gun. With utter disregard to personal safety, the valiant JCO charged the enemy position. A burst of machine gun fire wounded him in the chest but he carried on defiantly and went near enough to throw a grenade that silenced the Machine gun. His gallantry inspired his comrades and they routed the enemy but the Subedar succumbed to his injuries. For his bravery and supreme sacrifice, Subedar Ajit Singh was awarded the Maha Vir Chakra, India’s second highest gallantry award.

The assault was well supported by the tanks which fired and neutralized many pill boxes identified by the assaulting Infantry. The tank fire was so accurate that the Pakistanis thought that Indians had bought new tanks with Night Firing capability. Other Pill Boxes were destroyed by lobbing grenades through their loopholes. BARKI was finally captured after two hours of fierce hand to hand fighting.

Later when permission was given to Pakistanis to collect their dead, they took away four truck loads including Major Raja Aziz Bhatti who was posthumously awarded the NISHAN-i-HAIDER, Pakistan’s highest gallantry award even in defeat for his determined opposition to 4 SIKH. Each year, Major Bhatti is honoured in Pakistan on 6 Sep, also the Defence Day of Pakistan.

The brave Commanding Officer of CIH, Lieutenant Colonel Satish Chandra Joshi had won a Vir Chakra in the 1948 war against Pakistan. In the Battle for Barki he was driving a jeep to reconnoiter a passage through the mine field. However, a mine exploded killing the brave soldier who led from the front. He was awarded a bar to the Vir Chakra for his bravery and supreme sacrifice.

While 4 SIKH were battling their way through Barki, 16 PUNJAB was moving towards the Ichhogil Canal. The unit was tasked to capture and demolish the bridge on Ichhogil canal near Barki village, 14 Kms east of Lahore. The battalion invaded the minefields ahead of the canal to move forward to attack enemy defences. The unit received one Vir Chakra, one Vashist Seva Medal, three Sena Medals and Battle Honour Barki. The Battalion had the distinction of operating its elements across the Ichhogil Canal.

“So fierce was the assault that the enemy deserted their fire trenches and bunkers and tried to return by crossing the canal. In the melee and confusion of battle, they destroyed the bridge themselves. Many Pakistani soldiers were seen jumping into the canal. The battalion thus achieved the assigned task and objective.”

Barki and the other captured areas in vicinity remained under the control of the Indian Army till the end of the war despite numerous attempts by Pakistan to dislodge them. At Barki 4 SIKH flew a Nishan Sahib (Sikh Flag) on an old Gurudwara and set up Langar (Community Kitchen) for the old and destitute residents of Barki who could not escape to battle.

While 7 Infantry Division was able to achieve surprise and make good progress. The enemy quickly regrouped and fought back resolutely. The Ichhogil Canal and other drains and distributaries were well utilized by the defenders and protected Pakistan against any deep and destabilizing thrust by the Indian Army. 16 PUNJAB had gained a foothold across Ichhogil and the capture of Barki provided a secure firm base for extending the bridge head and launching an assault at Lahore. 7 Infantry Division operations could have been progressed further to threaten Lahore which was only 14 Kms from Barki but that did not happen. CIH and 17 GUARDS also received the Battle Honour BARKI.