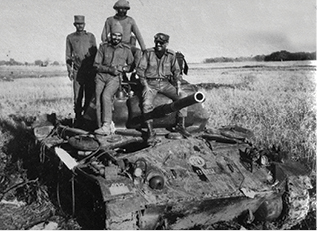 “You may be right, Sir. But I swear the buffaloes have 100-mm guns fitted on them and they are picking off our bunkers one by one”.

Pakistani Post Commander at Charkai, 11 Kms North of Hilli responding to his headquarters’ retort that he must be seeing buffaloes because tanks cannot come through the marshes and nalas.

In 1971, West Pakistan launched a war against its own people in East Pakistan, thousands were killed. Facing genocide, over 10 Million refugees fled into India. India was determined to act and by Nov, war between India and Pakistan seemed inevitable.

To defend East Pakistan, Lieutenant General A A K Niazi, General Officer Commanding-in-Chief East Pakistan, adopted a fortress form of defence by occupying important towns in strength. Namely the towns of Jessore, Jhendia, Bogra, Rangpur, Jamalpur, Mymensingh, Sylhet, Bhairab Bazar, Comilla and Chittagong. No deliberate defences were planned, and no troops earmarked for the defence of capital city Dacca, apparently no one imagined a full-scale offensive into the heartland. The Defence was coordinated as under:

The Indian strategy was to act quickly in East to decisively defeat Pakistani forces there while defending Indian territory in the West. A quick decision in the East would ensure an independent nation before international pressure could end the war. Indian Air Force achieved remarkable success and gained complete air superiority in the Eastern theatre within 48 Hours. This enabled the army columns to advance without any fear of detection even during day. India’s Eastern Command set the Pakistani communication centres (important towns, bridges etc) as its objectives.

Initially the Indian Army hammered head on into the fortresses but soon changed its strategy, and, despite its very small numerical superiority of 1.5 : 1, Indian Army’s ultimate victory is a tribute to its superior planning, preparation and training.

Numerous tactical battles were fought in the riverine terrain of Bangladesh. The toughest one was the Battle of Hilli in the North Western Sector fought between 23 Nov (i.e before the declaration of war) and 11 Dec; formal surrender on 18 Dec. The battle was significantly the most intense and pitched battle fought in the Eastern Theatre.

The Indian Army plan was to control Bogra, thereby cutting off Pakistan forces in the north from the rest of East Pakistan. The best way of getting to Bogra was through Hilli.

The terrain in North Western Sector was drier than rest of East Pakistan and suitable for armour. The Hardinge Bridge linked this sector by rail to Jessore-Jhenida in South. An all-weather road ran North-South to connect the border areas in North to some of the main cities of the region: Rangpur, Bogra, Nator. The only major river within the sector was Tista, which flowed North-West to South-East and joined Brahmaputra at Chilmari. Pakistan’s 16 Infantry Division with its headquarters at Bogra defended this sector with;

The main offensive of 33 Corps was launched by 20 Mountain Division consisting of 66, 165, 202 (leading the attack with 8 GUARDS, 5 GARHWAL Rifles, 22 MARATHA LI, 63 CAVALARY less a squadron) Mountain Brigades, 340 (Independent) Mountain Brigade Group, 3 (Independent) Armoured Brigade, 471 Engineer Brigade and two artillery brigades augmented by 33 Corps Artillery. It was tasked to capture Hilli, cut off the railway line coming south from Rangpur, thereby isolating Pakistani defences in the north. The assault on Hilli turned out to be slogging match against its well-prepared defences, held by up to a brigade strength leading to heavy casualties on both sides. Despite repeated attacks, the defenders held resolutely on.

8 GUARDS led the assault with 5 GARHWAL as Reserve. 8 GUARDS won three Mahavir Chakras (MVC), two Vir Chakras (VrC) and one Sena Medal to become the most decorated battalion of the War; famous as the triple MVC battalion. All three battalions of the 202 Infantry Brigade captured different objectives in Hilli after fierce fighting. Hilli was finally cleared on 11 Dec.

Meanwhile 71 Mountain Brigade thrust against Thakurgaon in the North succeeded and was threatening the fortress-town of Dinajpur in the north.

The Indian Army soon realised the futility of attacking Pakistani Fortresses. 340 (I) Mountain Brigade, the corps reserve, was tasked to move north of (i.e Bypass) Hilli and threaten Pirganj, thereby forcing the thinning of Hilli to cater for this new threat to its rear and then attack Bogra.

The advance of 340 Brigade was of a classic manoeuvre: skilful use of tanks and tank-mounted infantry. 5/11 GORKHA Rifles provided a firm base for 340 Infantry Brigade’s assault on Bogra. it was ordered to isolate Bogra from the West and clear all enemy resistance West of Road Bogra-Sherpur. 2/5 GORKHA Rifles along with a Squadron of 63 CAVALARY advanced along Road Rangpur-Bogra to capture the town from the North. 6 GUARDS with 69 Armoured Regiment bypassed it from the East and cut it off from the South.

In the war, 63 CAVALARY was named the ‘Ghost Regiment’ by the enemy; their tanks would appear from anywhere and nowhere to rattle and knock out the enemy. Also, Battle of Bogra was unique in that it was the only battle of 1971 War fought in a Built Up Area and every inch of ground was contested for aggressively.

The increased mobility enabled bypassing of enemy frontal defences, beating them to new defensive lines they had intended to occupy and attacking them from flanks and rear. The bold use of armour resulted in the rapid fall of Pakistani Army strongholds and its forces were divided and pushed back towards the two extreme ends of the sector. (Rangpur and Bogra). 4 MADRAS was placed under command to strengthen the brigade.

The fighting in Bogra was stiff, tanks found it difficult to manoeuvre in the built-up area. The Indian Air Force helped with close support. By midday on 14 Dec a large portion of the town was taken. Fighting continued on the following day with the Pakistanis sticking to a small perimeter. In the early hours of 16 Dec small groups began to surrender and later during the day came the orders for cease-fire. The capture of Bogra was a landmark victory against the enemy entrenched in fortified positions. It was a classic battle in a built up area where grit, determination combined with individual and collective gallant actions and military skills played a major role. The Indian casualties in the sector were 16 officers, 11 JCOs and 344 other ranks killed, 54 officers, 33 JCOs and 874 other ranks wounded.

With hard lessons learnt at Hilli and during the advance to Bogra, the Eastern Command strategy was refined and operations progressed with lightning speed successful bypassing enemy fortresses. Windows of opportunity swung open and Dacca soon became the terminal objective. Mukti Bahini a highly motivated lot, thirsting for revenge against the Pak soldiers provided effective intelligence of the locations of the Pak troops, which went a long way in helping the Indian Army to get through the gaps and achieve speed and surprise in their march towards Dacca. All the participating Battalions and Regiments were awarded the Battle Honours Hilli and Bogra.

“Battles are won by slaughter and manoeuvre. The greater the general, the more he contributes in manoeuvre, the less he demands in slaughter. -Winston Churchill