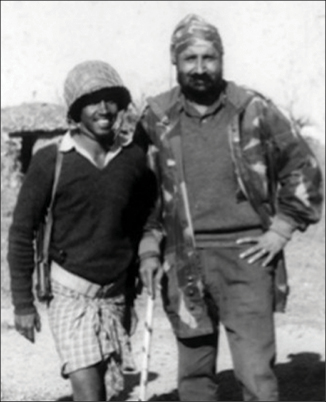 The crucial Indian offensive in East Pakistan was to unfold in the Central and Eastern Sectors. The going here was better than in the other sectors which were flush with water obstacles and poor infrastructure.

Operations in the Central Sector were conducted by 101 Communications Zone (CZ), comprising of only one brigade, 95 Infantry Brigade. It faced Pakistani 93 Infantry Brigade. Initially deployed for administrative tasks, 101 CZ was given an additional ad-hoc brigade sized force, code-named ‘FJ Force’, made up of a nucleus of regular troops and bulk of defected East Pakistani forces.

A two-pronged advance towards Jamalpur and Mymensingh with 95 Brigade and FJ Force respectively was planned. They were to capture Jamalpur, Mymensingh and subsequently Tangail near Dacca. This would open the axis to Dacca and provided a more direct approach

95 Mountain Brigade entered East Pakistan on 3 Dec from Kamalpur Border Out Post (BOP) defended by a company of 31 Baluch, platoon of Rangers and Razakaars. The BOP had well-prepared defences including concrete bunkers, it was a small but compact post. It was put under a siege by 13th Battalion, the GUARDS Regiment. The enemy fought resolutely and were subjected to intense artillery fire and strafing from the air. Badly battered, they finally surrendered at 1900h on 4 Dec. The bravery and tenacity of the young Pak Company commander Captain Ashan Malik was appreciated by none other than General Manekshaw who stated that “Militarily his performance was excellent” and that he should be shown special courtesy as a POW.

The next objective was Bakshiganj, another 31 Baluch Company locality. Its outer defences were based on bunkers and pill boxes and the interior was a built-up area. 1st Battalion, the MARATHA LI Regiment (Jangi Paltan) established a firm base and a roadblock on the road Bakshiganj – Sherpur. 13th Battalion, the RAJPUTANA Rifles advanced to encircle Bakshiganj by 8 AM on 4 Dec. The enemy kept firing at the patrols of the two battalions from a long distance without much damage. Finally realising that they were surrounded and threatened, the enemy withdrew to Jamalpur and Bakshiganj was occupied by 4 AM on 5 Dec.

The next objective was Jamalpur, the Battalion defended area of 31 Baluch. Information collected from PsOW and other sources indicated that there were 1500 men including 31 Baluch with 8X120 mm Mortars, six X 6 Pounder Guns, 2 X 106 mm RCLs and 72 LMGs/MMGs. The town lay on the southern bank of the ‘Old Brahmaputra’ River. Simply stated it was a well prepared and defended fortress and could easily make a defender complacent of his strength.

Brig HS Kler, commander 95 Brigade planned to pursue the withdrawing enemy with 13 RAJPUTANA Rifles and secure the river line on the northern bank to allow the deployment of the supporting artillery following behind. 13 GUARDS, by now relieved from Kamalpur, was to advance along the Bakhshiganj-Sherpur-Jamalpur axis to protect the flank of 13 RAJPUTANA Rifles and facilitate the advance along the main axis (Bakshiganj-Jamalpur) by dividing the Pakistani troops in delaying positions. The third battalion 1 MARATHA LI was to move cross-country on a manpack and bullock carts to about six miles west of Jamalpur, where country boats mustered by the Mukti Bahini were to ferry them across the Brahmaputra to establish roadblocks. The battalions were devoid of dedicated troop-carrying transport and whatever available locally was used to cover the distances of 25 to 30 Kms. The battalion moved with appreciable speed and quickly established the blocks to prevent the Jamalpur Garrison from escaping. 13 GUARDS were to be brought up after release from the Sherpur axis to attack the defended locality of Jamalpur. Their rate of build-up was however slower than envisaged.

13 RAJPUTANA Rifles moved into a position to dominate the line from the northern bank effectively and 13 GUARDS took up position behind 1 MARATHA LI roadblocks on the road Jamalpur-Mymensingh. Once the blocks were in position, Brig Kler sent a letter to Lieutenant Colonel Ahmed Sultan, Commander Jamalpur Fortress asking him to surrender to avoid the inevitable bloodshed. He spoke from his position of superior strength and assured artillery and air support.

In response the Pak commander was very arrogant and replied: Let me see you with a sten in your hand next time instead of the pen you seem to have such mastery over, Now get on and fight.

The MARATHA LI roadblock came under intense artillery shelling on 10 Dec and at midnight, the Pakistani forces at Jamalpur tried to break through the roadblock positions towards Tangail.

An intense battle ensued, in which 31 Baluch together with the Rangers grouped with it and other irregulars faced the might of the Jangi Paltan. By dawn approximately 60 Pak soldiers came forward to surrender, over 234 enemy were killed and 20 injured. When the battalion moved forward to secure Jamalpur and the assault was being reinforced by 13 GUARDS and 6 SIKH LI (additional resource placed under command 95 Infantry Brigade), a Pak wireless message was received:

Hello, any Indian Station. This is a Pakistani Station;

I want to surrender.

Lieutenant Iftikar of 31 Baluch came out to surrender with a white flag. On 11 Dec at about 0630h, Brig Kler and the Commanding Officer 1 MARATHA LI drove into Jamalpur in the captured jeep of Commanding Officer 31 Baluch (he had fled, the previous night). Three more officers, ten junior commissioned officers and 372 OR now surrendered and, a large quantity of arms and ammunition were also captured.

At the tactical level, HardevKler was a cut above the rest. His masterful handling of the battle of Jamalpur is the stuff that legends are made off. A combination of the brilliance of Sagat and the tactical acumen of HardevKler, helped India snatch a victory in a time frame that few would have thought possible at the commencement of the war- Major General Dhruv C Katoch, former Director at Centre for Land Warfare Studies.

The battle of Jamalpur was very fierce with 1 MARATHA LI and 13 GUARDS fighting a brilliant tactical battle that involved laying multiple ambushes. Air strikes by Hunter aircrafts of the Indian Airforce softened the surprisingly resilient garrison.

During this operation and the onwards march to Dacca, 1 MARATHA LI lost 13 OR and was awarded Five Vir Chakras, two Sena Medals and two Mentioned in Despatches. Brigadier HS Kler was awarded the MahaVir Chakra.

The F-J Sector Brigadier Sant Singh, Commander FJ Sector, marched to Mymensingh with 6th Battalion, the BIHAR Regiment, 93 BSF Battalion and supported by Mukti Bahini fighters crossed the IB and captured Mymensingh after some delaying actions by retreating Pakistani troops in the area by 11 Dec. “Time was of essence and the fall of Mymensingh was among the decisive points of the war in the east,” said, Brig Sant Singh, who was decorated with the MahaVir Chakra, his second, he won his first during the 1965 war while Commanding 5th Battalion, the SIKH Light Infantry Regiment in the ferocious battle of the ‘OP Hill’.

With Jamalpur and Mymensingh captured, a paradrop was then planned by 2 PARA on 11 Dec aimed to capture the Poongli Bridge on road Jamalpur-Tangail-Dacca intact; it was crucial for the progress of operations further.

All the participating units of 95 Infantry Brigade were awarded the Battle Honour: Jamalpur.