Battles That Made History 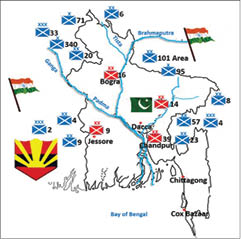 4 Corps under Lieutenant General Sagat Singh started its campaign in the 1971 Indo Pak War from Agartala.

This Sector was defended by Pakistan 14 Infantry Division located at Brahmanbaria with:

“My troops in the border outposts are like the extended fingers of an open hand. They will fight there as long as possible before they fold back to the fortresses to form a fist to bash the Enemy’s head”. Lieutenant General AAK Niazi, Pak Commander in Chief East Pakistan. His tall claims exploded with the first contact itself.

◙             23 Mountain Division was responsible for operations in Chandpur sector and clearance of the enemy in Lalmai hills.

Accordingly, Operation Nutcracker was planned to capture Karnel Bazar, Gangasagar and Akhaura. The Pakistani strength in the area was estimated to be the Battalion HQ of 12 Frontier Force (FF) and or 12 Azad Kashmir Battalion making a total of two to four companies in defences. 73 and 311 Mountain Brigades, S Force comprising 2 and 11 East Bangladesh Battalions with other attached and supporting elements were tasked for Op Nutcracker. This operation would assist 61 Mountain Brigade to cross River Gomti and capture Myanmati.

73 Mountain Brigade consisting of 14 GUARDS, 19 PUNJAB and 19 RAJPUTANA RIFLES was tasked for the attack on Karnel Bazaar and Gangasagar, both located close to the International Border. The attack was launched on the night of 01/02 Dec. 14 GUARDS quickly established roadblocks south and west of Gangasagar, while 19 PUNJAB with a troop of tanks quickly captured Karnel Bazar the same night. Thereafter, both battalions contacted the Pakistani forces deployed at Gangasagar which was captured on 3 Dec sealing off to the Pak Army an approach to Akhaura from the South and initiating the isolation of 14 Infantry Division at Brahmanbaria.

Intelligence inputs about the objective were sketchy and Gangasagar was reported to be held by one company. It was eventually found to be held by approximately three companies of 12 Frontier Force, a company of 12 Azad Kashmir Rifles and reinforced by a company of Razakars. The town was located on a major railway link to Dhaka and owing to its strategic position was a well-fortified position. The surrounding areas were heavily mined with anti-tank and anti-personnel mines. Many areas were also inundated and marshy. Closer to the defences were a series of wire obstacles and the defences themselves were well coordinated. 14 GUARDS which was tasked to capture Gangasagar indeed was served a tough nut to crack on its plate.

Moving cross country 14 GUARDS established itself just south of Gangasagar, where it was joined by 19 PUNJAB after the capture of Karnel Bazar enroute. The overall mood was buoyant because of the earlier victory; the successful accomplishment of a mission leads to high morale more often than vice versa.

True to their regimental motto, ‘Pehle Hamesha Pehle’ on the morning of 3 Dec 1971, two companies of the 14 GUARDS launched an assault on the Gangasagar Railway Station, while the other two undertook operations capturing other parts of the town.

For the two companies assaulting the Gangasagar Railway Station, the task was tough and dangerous. It was unique in the threat and risks it offered as it involved approaching the objective in a single file astride the railway lines; extremely vulnerable to enfilade fire from the defences. With the enemy well entrenched in concrete bunkers and determined to defend with all his might, the only way to eliminate resistance was to close in silently and briskly, lob grenades and use the bayonet ruthlessly and effectively to eliminate the opposition.

Bitter hand-to-hand fighting ensued. Even while they were nearly 100 yards away from Pakistani defences, the attackers came under heavy fire from Machine Guns. Undeterred, they kept charging one enemy position after the other shouting their regiment’s battle cry ‘Garud ka Hun Bole Pyara’ (I am the son of Garuda, say O my friend). Despite the death toll and injuries resulting from Machine Gun fire, mines and wires, the remaining Guardsmen propelled themselves further till they were eventually locked in hand-to-hand combat with the Pakistani soldiers.

For a soldier a buddy’s death or injury in action is more grievous than their own and pumps up their morale immensely, the Garuds were unstoppable.

During the battle, Lance Naik Albert Ekka, a young Guardsman only 20 years of age noticed that a Pakistani Light Machine Gun was inflicting serious damage to the attacking troops. With complete disregard for his personal safety, he charged the enemy bunker, bayoneted two enemy soldiers and silenced the gun. Though seriously wounded in this encounter, he continued to fight through the mile-deep objective with his platoon, clearing bunker after bunker.

Towards the northern end of the objective, one enemy Medium Machine Gun opened up from the second storey of a well-fortified building inflicting heavy casualties and holding up the attack. Once again, this gallant soldier, without a thought for his personal safety, despite his serious injury and the heavy volume of enemy fire, crawled forward till he reached the building and lobbed a grenade into the bunker killing one enemy soldier and injuring the other.

The Machine Gun, however, continued to fire. With outstanding courage and determination, Lance Naik Albert Ekka scaled a side wall and entering the bunker, bayoneted the enemy soldier who was still firing and thus silenced the Machine Gun, saving further casualties to his company and ensuring the success of the attack.

He was martyred on the objective and later awarded the only Param Vir Chakra of the 1971 War in the Eastern Sector.

14 GUARDS lost ten Other Ranks and three Junior Commissioned Officers while 55 Other Ranks were wounded. The enemy left behind 25 dead, six Prisoners of War and a huge quantity of arms and ammunition were captured. In addition to the Param Vir Chakra, the battalion was also awarded one Vir Chakra, one Sena Medal and a Vishisht Seva Medal.

The enemy tried to counterattack with armour and infantry supported by his Air Force but was repulsed.  After the capture of Gangasagar, 73 Brigade linked up with 311 Brigade in the north and established a roadblock on the Kasba-Brahmanbaria road, with a view to isolating Kasba. The fall of Gangasar also forced the enemy to vacate Aghuara.