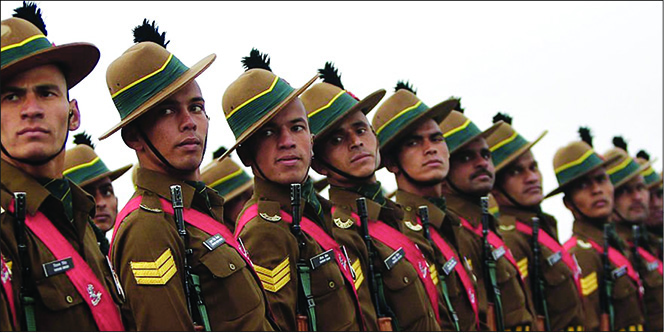 11 Infantry Division carried out a fairly deep advance into enemy terrain in the Barmer Sector. The Indian Air Force played the major role in blunting the enemy offensive in the Jaisalmer Sector. These operations showed that there is considerable potential for mobile operations in desert terrain and that the desert could no longer be ignored as was done in the past. –General KV Krishna Rao, former Chief of the Indian Army

In the 1971 Indo Pak War, while India sought to assuage the sufferings of millions in East Pakistan against the plundering Pakistan Army. Yahaya Khan sought to strike a balance in the West by capturing territory to trade off with that lost in East……. a strategic overreach? or, plain foolishness?……… the operations in the west began with great intensity and Indian Army captured vast tracts of Pakistani territory.

11 Infantry Division of the Indian Army’s Southern Command was concentrated in Barmer sector in Rajasthan by Oct 1971. In Rajasthan, the international boundary runs through a desert tract separating the Indian districts of Bikaner, Jaisalmer and Barmer from the West Pakistan districts of Bahawalpur, Rahim Yar Khan, Khanpur and Mirpur Khas. The whole region is a vast expanse of shifting sands with occasional rock exposures.

The division had two brigades, a tank squadron (14 – T-55 Tanks) and a camel mounted Battalion 17 GRENADIERs to protect the flanks and 10 PARA Commando Battlion to conduct raids in Pak Rear Areas. The Division Artillery consisted of one Medium, three Field and one Light Regiment.

11 Infantry Division was tasked to capture NayaChor by advancing along axis Gadra Road-Munabao. Subsidiary attacks were to be made on Khinsar and Chachro.

During the 1971 Indo Pak War, 11 Infantry Division had the distinction of capturing over 9000 square KMs of Pak territory; big catch for a Division with just two brigades.

Operations commenced with the Battle of Gadra City (a small village with a population of about 10,000) fought on the night of 4/5 Dec 1971 by 15 Battalion, the KUMAON Regiment (Indore). The objective was heavily fortified with pill boxes and held by a company minus strength. It was supported by six Artillery guns, eight Medium Machine Guns (MMGs) and six 81 mm Mortars in addition to a large number of Light Machine Guns (LMGs). Gadra City lies in a bowl formed by high sand dunes, the defences were well coordinated and based on dunes and rocks surrounding Gadra.

15 KUMAON plan to capture Gadra was as under:

15 KUMAON crossed the International Border (IB) at 1800 H in darkness, moon rise was two hours later maintaining complete silence. Just across the border Point 658 and Whaleback dominating the IB were being held by a Protective Patrol. It was creating a false front and screening the main defences. By 2200 hours, the objective was captured by Delta Company and Phase 1 completed successfully without any casualties.

The enemy was taken by surprise and not yet sure of the attacker’s intentions. Bravo and Charlie Companies passed through silently to their Forming Up Place (FUP) secured by Delta Company. At the FUP, the enemy suspecting them to be a Recce Patrol fired at them with a single MMG. Evidently the enemy remained clueless about the strength and disposition of the assaulting force. He also did not want to give away the frontage and disposition of his own defences by firing all his weapons.

The surprise and silence was now broken by Pre H Hour Artillery fire (to soften the target just before the attack). The enemy responded ferociously with small arms and MMG fire. Despite the heavy fire, the attack commenced with a resolute and relentless charge. War cries of ‘Kalika Mata ki Jai’ thundered in the desert which unnerved the enemy. Fearing defeat, the enemy withdrew to depth defensive positions on the high ground and Ridge in Gadara City, leaving behind their equipment and dead soldiers in the pill boxes.

Bravo and Charlie Company successfully captured their objectives 157r and a Dune and exploited further for a safe and secure reorganisation. The enemy responded quickly and fired at the just captured objective. Since the KUMOANIs had exploited beyond the objective, they were safe.

In the final phase, the main defences consisting of pill boxes on top of the dunes south of Gadra city were to be tackled. Alfa Company and Delta Company infiltrated behind the enemy positions on Gadra-Dali Road to launch their assault. The enemy resorted to heavy artillery and MMG fire from their vantage positions. MMG fire downhill was plunging and not very effective. The KUMOUNIs did well to dash from cover to cover to avoid casualties. In the final count they countered and eliminated the MMGs and LMGs deployed on the heights. The reserve platoon of Alfa Company was unfortunately caught in the fire and suffered casualties. The assault went on well and soon turned out to be a hand-to-hand slugfest in which the hardy KUMAONIs prevailed over the enemy who was either killed or fled. With the morning sun came a hard-fought victory.

The KUMAONIs lost one JCO and one other rank (OR) as Killed in Action while 22 ORs were injured. Enemy losses were around 40 killed. Besides 3 PoWs, the Battalion captured one jeep, four 3 inch mortars, one 2 inch mortar, two 6 pounder guns, one Vickers MMG, one LMG, 23 rifles, one radio set, 13 camels and large quantities of ammunition. 15 Kumaon then continued as the vanguard and advanced deeper into the desert.

The Battalion was awarded two Vir Chakras (Lance Naik Durga Dutt (Posthumous) and Maj Sunhara Singh (OC Delta Company)), three Sena Medals and three Mentioned in Despatches (including the CO). Lance Naik Durga Datt in face of heavy enemy fire during the assault charged an MMG bunker and lobbed a hand grenade that destroyed the gun and its crew. He then moved to another bunker and was hit in the head by the burst of enemy fire from another automatic weapon. He continued his charge, silenced the second bunker and succumbed to his injuries.

13 Field Artillery Regiment which was in direct support of 15 KUMAON for the attack played a crucial role in the attack. Their Forward Observation Officer with the KUMAONIs and his radio operator directed the fire of their guns with great accuracy causing intense damage to the enemy defences and many casualties. Both were ‘Mentioned in Despatches’. Movement of the guns in the desert is a big challenge and tracks had to be prepared using scarce expedients judiciously and innovatively. The CO and a JCO of the regiment were awarded the Vishisht Sewa Medal for ensuring that they guns were never stuck.

Led by 15 KUMAON and supported by some aggressive artillery fire, the advance had fair momentum.