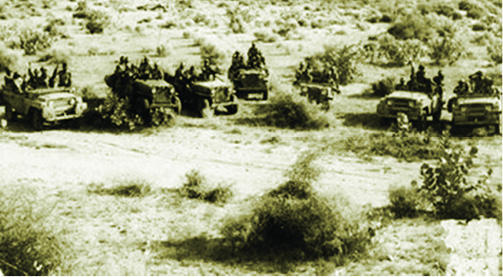 So thorough and accurate was the planning, the preparation and the execution that the 10th Battalion, the PARA Regiment (Commando) captured Chachro, Virawah, Nagarparkar, Islamkot, Lunio without a single causality. The enemy lost 36 men and 22 were taken as PoWs.

In the 1971 Indo Pak War, while India sought to assuage the sufferings of millions in East Pakistan against the plundering Pakistan Army. Yahaya Khan sought to strike a balance in the West by capturing territory to trade off with that lost in East……. a strategic overreach? or, plain foolishness?……… the operations in the west began with great intensity and Indian Army captured vast tracts of Pakistani territory.

11 Infantry Division of Indian Army’s Southern Command was concentrated in Barmer sector in Rajasthan by Oct 1971. In Rajasthan, the international boundary runs through a desert tract separating the Indian districts of Bikaner, Jaisalmer and Barmer from the West Pakistan districts of Bahawalpur, Rahim Yar Khan, Khanpur and Mirpur Khas. The whole region is a vast expanse of shifting sands with occasional rock exposures.

The division had two brigades, a tank squadron (14 – T-55 Tanks), a camel mounted Battalion 17 GRENADIERs to protect the flanks and 10 PARA Commando Battalion to conduct raids in Pak Rear Areas. The Division Artillery consisted of one Medium, three Field and one Light Regiment.

11 Infantry Division was tasked to capture NayaChor by advancing along axis Gadra Road-Munabao. Subsidiary attacks were to be made on Khinsar and Chachro.

During the 1971 Indo Pak War, 11 Infantry Division had the distinction of capturing over 9000 square KMs of Pak territory: big catch for a Division with just two brigades.

10th Battalion, the PARA Commando (Desert Scorpions) was raised in 1967 and within four years of its raising, was detailed to conduct bold long-range raids into the enemy territory in the rugged terrain of the Thar Desert. The battalion demonstrated remarkable skills to fulfil its task and compliment the 11 Infantry Division Operations.

The assigned task was challenging, and expectations were very high, since the success of subsequent operations by the main thrust in this area heavily depended upon the quality of information passed on by the Battalion, as also on the neutralization of pockets of enemy resistance at the earliest. –Lieutenant General Prakash Katoch, Author and a Senior Special Forces Officer

The battalions had trained hard for over five months close to Barmer. Led by Lt Col Bhawani Singh, for four days, two teams of the battalion infiltrated deep inside Pakistani territory and carried out raids. The unit had many local Rajputs who knew the area and terrain well. Their first objective was Chachro, 80 km inside enemy territory in the Tharparkar District of Sindh. Their aim was to hit enemy supply lines and create confusion. To complete their mission, the teams travelled over 500 km inside enemy territory, hitting many enemy defensive positions.

The terrain was harsh and merciless. The raid was carried out on Jeeps and Jongas mounted with LMGs and MMGs and loaded with water, rations and ammunition. There would be no air or armour support. The audacious raid commenced on 5 Dec 1971; the starting buzz words were stealth and surprise. This did not work for long, the whining of the Jeeps in the soft sand gave away surprise pronto and stealth gave way to speed, all to the favour of the raiders. The enemy took the noise and racket to be a tank regiment breaking in and most simply fled in fear. The ‘Scorpions’ were set to conquer the desert.

“The route was so bad that all silencers of our Jeeps/Jongas made us sound like a full-tank battalion moving into Pakistan” remembers Lieutenant Abraham Chacko of Alfa Team.

The movement was quick and without any resistance. It was only at 0700 hours, 5 Dec about 70 Kms inside the enemy territory, that the Alfa Team came under intense MMG fire from top of a sand dune at Kita. The commandos took cover and were considering their further course of action. At this time one of the vanguards, Naik Nihal Singh determined to confront the enemy upfront opened up with his jeep mounted LMG and charged the enemy. The well entrenched enemy was rattled by the audacious charge of this brave young soldier, others followed suite and soon the enemy was facing ‘lead’ from 18 LMGs. They simply took flight rather than face certain death. The Early Warning position was quickly occupied, and a firm base established.

The objective – Pakistani Rangers Wing HQs at Chachro was now just a stone throw away. Even they were now warned of the impending attack and prepared themselves. Chachro had a number of civilians, and 10 Para Commando was determined to avoid any collateral damage. This made the task even more difficult and required great precisions and skills.

After the Kita firefight, a small patrol was sent ahead to carry out route clearance and reconnaissance of the target. This team moved into the night and gave a clearance to attack at 0400 hours on 7 Dec.

Alpha team took positions around the town blocking every exit point, ready to provide cover fire. Charlie team moved in for the offensive at dawn. The presence of civilians and fear of collateral damage kept the teams on their toes. The teams moved in swiftly and by first light had captured Chachro with little resistance being offered by the confused and scared enemy; who would have expected such a daring raid so deep. The Pakis suffered 17 Dead and 12 POWs. The brave Commandos of the raiding party suffered none. Chachro was handed over to 20th Battalion the RAJPUT Regiment who had by then linked up with 10 PARA and the 11 Infantry Division operations progressed further.

The stealth and speed of the attack on the Pakistani Ranger Base at Chachro, took the enemy in the theatre completely by surprise. They were comfortable with the thought that the desert was foreboding for attempts to breach it and would give the defenders enough time and space to counter it. The depth offered by the desert was comforting and they failed to deploy reasonable Early Warning elements. The attack on Chachro came as a shock and the subsequent build up of the 11 Infantry Division only rattled the enemy further.

Exploiting the enemy’s psychological dislocation, and to exploit success, no time was wasted in raiding Virwah and Nagarparkar in quick succession.

Charlie team exfiltrated while the Alpha team moved towards its second target Virwah, the move was by day and time was at a premium. Virwah defences were contacted at 0200 h on 8 Dec. There was brief tussle and even a hand-to-hand fight. Later the enemy fled in face of intense LMG and Mortar fire. Nagarparkar a tehsil Headquarter was the next to fall by first light 8 Dec.

The teams were back to their bases after this operation.

Alfa Team was next assigned to attack a suspected ammunition dump in Islamkot. The group entered Pakistan again on 16 Dec. At 0530 hours, they launched their assault but found the camp empty.

On their way back from the mission is when they faced the enemy again. Seeing clouds of dust, the ‘Scorpians’ quickly set up an ambush. The unsuspecting enemy walked into the cleverly set ambush and 18-20 enemy soldiers were killed on the spot and rest were taken POWs. Major SomDutt Sharma who was leading the team exhibited exceptional bravery in planning and execution of the ambush.

From Kita to Islamkot, the battalion did not suffer a single casualty in the entire operation. This a tribute to their high standards of morale, motivation and training.

The battalion was awarded the Battle Honor– ‘Chachro 1971’ and were rewarded with 10 Gallantry Awards: Col Bhawani Singh was awarded the Mahavir Chakra, Maj SomDutt Sharma and Nk Nihal Singh the Vir Chakra.

Interestingly Chachro remained in Indian occupation till 22 Dec 1972. A Sub Post Office was opened there and allotted the Pin 344503.