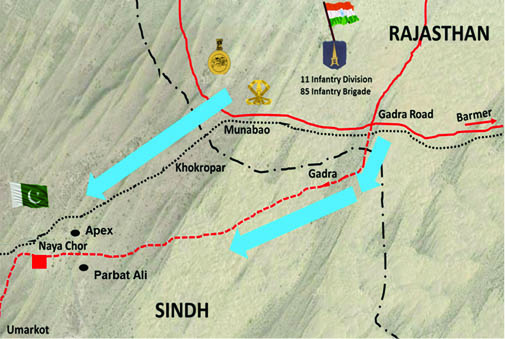 Even in darkness we could see the disarray amongst the Pakistanis. The Sikh and Mahar war cries were resonating in the desert. In panic, the enemy left their trenches, many of them in underclothing. The attack on Parbat Ali was undertaken with complete surprise. 1971 – An Excursion in Sindh : Notings from a Soldier’s Diary Captain Shekhar Dutt, SM, IAS (Retd)

11 Division of the Indian Army’s Southern Command was concentrated in Barmer sector in Rajasthan by Oct 1971.

The division had two brigades and a tank squadron (14 – T55 Tanks). It was tasked to capture NayaChor by advancing along axis Gadra Road-Munabao. Subsidiary attacks were to be made on Khinsar and Chachro. During the war, the division has the distinction of capturing over 9000 square KMs of Pak territory.

The valiant units of the division won battle-honours for its operations at Parbat Ali, Chachro, Gadra City and Khinsar. The division also has the distinction of receiving two MahaVir Chakra and 26 Vir Chakra during the war (Most were won during the capture of Parbat Ali more than 80 Kms deep into the Pak territory).

85 Infantry Brigade was tasked to undertake operations along the Munabao-Nayachor axis, 10 Sikh Light Infantry spearheaded the advance of 85 Infantry Brigade Northward through the Sind Desert along the railway line. They moved very swiftly clearing all minor opposition along the way; in most cases, the enemy simply melted away without a fight.

Major opposition was faced at Gazi Camp and Kaljor which were strong enemy Border Outposts. Pakistan had constructed reinforced concrete bunkers here and the defences were well supported by Artillery fire to halt any attempts to breach the border and maintain the confidence of defensive elements in the rear.  The Indian Army quietly staged forward Medium Guns of 2183 Medium Regiment at night and blasted the bunkers with the guns firing in the Direct Fire role; the guns with their callibre of 130 MM simply tore the bunkers apart. By midnight on 4 Dec, the strong enemy border outposts had been captured giving the assaulting formations great confidence. By midday on 5 Dec, the frontier Khokropar Railway station was captured and the axis to Nayachor lay open.

During the war, Pakistani units operating in the deserts identified their own positions to their returning aircraft by firing smoke shells in a linear fashion demarcating the area held by Indian troops. Paying back in their own coin, on a few occasions, Indian Forward Observation Officers supporting the leading elements got their supporting artillery to fire the same colour of smoke shells as a linear target deep inside the Pakistani territory. This led the Pakistani aircraft to strafe and bomb their own positions thinking that it was held by the Indian troops. This created chaos amongst the rank and file who dispersed in all directions into the desert.

In contrast, the morale of 85 Infantry Brigade was high; the initial success added a spring to their strides. The going however soon became difficult because the axis of the attack which was thought to be a metaled road turned out to be a Desert track and the advance slowed down. The enemy air was also fairly active and persistently harassed the advancing columns strafing them with machine guns and rockets. The advance however continued undeterred and contact was soon established with Apex and Parbat Ali which were high dunes dominating the approach to Nayachor.

Apex was attacked on the night 10/11 Dec and captured on 11 Dec. Parbat Ali was a tougher nut to crack and the slow buildup delayed any offensive against the feature which stood 200 feet above the ground level in the area. It was a U-shaped feature which acted as a screen to Nayachor and also dominated all approaches to the town. It was held by two companies each of 21 and 39 Frontier Force Rifles of the Pakistan Army. All approaches to the top were dominated by Medium Machine Guns and supported by dedicated Artillery Fire. There were high density minefields and the feature was sited for all round defense (Its weapons were so sited that could bring equal volumes of fire on all approaches). In military terms Parbat Ali could be described as a Strong and well prepared Defended Locality; a hard to crack.

In order to capture this difficult feature, a careful and a well-coordinated plan involving multiple cohesive and complementary military operations were planned.

Just before 0300 hours on the Night 12/13 Dec the Indian Artillery laid out a barrage of Artillery Fire to soften the target. Supported by the deadly and accurate fire, 2 MAHAR and 10 SIKH commenced their assault from the knuckle end; the most unexpected approach in the enemy’s appreciation. The knuckle end of a dune is its steeper face and the finger end is the gentler sloppier end, assaulting up the knuckle end can be as difficult as assaulting over a cliff face. The enemy was caught totally off guard and abandoned their trenches in face of the ferocious battle cries.

All objectives were secured by 0400 hours and the battalions quickly regrouped on the objective. The replenishment parties also fetched up and the assaulting troops prepared themselves for any counter attack from the enemy.

The enemy too was determined to bounce back from the serious setback they had received and set about preparing to counterattack. Heavy enemy artillery shelling was on and the signs were ominous. Subedar Gurcharan Singh one of the Platoon Commanders while reorganizing on the objective observed two enemy companies forming up for a counter-attack. He immediately took a bold decision and led his platoon in a charge on the enemy preparing for the attack. This unexpected spoiling attack (an attack launched on the enemy forming up for an assault), launched with speed and determination, broke up the enemy attack and they withdrew in utter confusion once again. During this attack, Gurcharan was mortally wounded. Naik Gurjant Singh of the same platoon bayoneted seven enemy soldiers before he himself was killed; together they had indeed spoiled the enemy’s intentions.

The artillery shelling continued with the Forward Observation Officers taking on the enemy tanks with medium guns, their impact on the tanks was so strong that it created confusion and they fled out of fear leaving behind their tanks.  After another Counter Attack at 0645 hours was beaten back, Major Amrik Singh the leading company commander volunteered to lead the next assault on the enemy’s depth locality on the feature in broad daylight.

The second objective too was well fortified and protected by a minefield 600 metres deep. Major Amrik Singh led the assault and under his inspiring leadership his company charged through the minefield and captured the objective after fierce hand-to-hand fighting against the hardy Pakistanis. During the assault, Major Amrik Singh was seriously wounded but continued to direct his men to the ultimate capture of the objective.

The die hard and well enemy entrenched started forming up for another Counter Attack which was beaten back with the support of the troop of tanks. The fortified feature of Parbat Ali was finally captured at 1000 hours on 13 December.

It was a fierce battle all along with bayonets and violent hand to hand fight from trench to trench. The gallant 10 SIKH won Six Vir Chakras (Major Amrik Singh, Subedar Gurcharan Singh (posthumous), Naik Gurjant Singh (posthumous), Lance Naik Harbhajan Singh, Sepoy Mohan Singh), Three Sena Medals and Six Mention-in-Dispatches. The enemy retreated, badly mauled, leaving behind 57 dead with 35 Prisoners and huge quantity of arms and ammunition. The dead were all given a decent burial in the highest traditions of the Indian Army on the feature itself.

Total surprise had been achieved by using the most difficult and unexpected direction for attack while the artillery provided accurate and effective fire through their very brave and determined Forward Observation Officers.