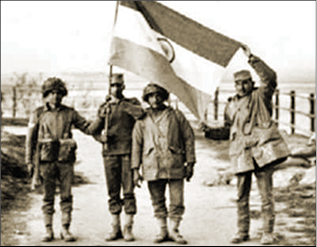 The Brigade Group had a strong composition and the intent clearly was to capture the Pak Jassar Enclave at the earliest.

The Pakistani enclave Jassar included and guarded the southern end of the Ravi road-rail bridge, over which Pakistani communications network in the Passur-Narowal area could be integrated easily with ours in Punjab. It is located very close to Dera Baba Nanak from where roads lead to major towns of Punjab like Gurdaspur, Batala, Beas and Amritsar. A bold and successful armoured thrust from a Bridge Head in the enclave can lead to capture of Gurdaspur and militarily outflank defences of Amritsar and Pathankot creating pressure on the axis to Jammu and Kashmir.

Similarly, the Indian enclave Kasowal provides a sizable bridgehead across the Ravi from where operations can be developed against the defences of Jassar and Narowal. Jassar is an important Railway Station and communication centre on the road Pasrur-Narowal-Shakargarh. Thus both sides have readymade bridgeheads in each other’s territory which can be exploited offensively. Accordingly, defences on both sides facing the enclaves are well developed to avoid any mishap from a surprise and sudden attack. Numerous Dhussi ((Mud Flood Embankments) and Ring Bunds exist for flood control and also serve as defensive obstacles.

About 9.30 PM on the night of 3/4 Dec, Pakistan launched a surprise attack on the Kasowal enclave with a combat group of tanks and infantry preceded by intense artillery bombardment. The enclave was vacated by 4.30 AM on 4 Dec by our troops as part of the overall plan.

5 Dec 1971, the DBN Brigade was entrusted with the task of capturing the DBN Bridge – Op Akal. In spite of heavy enemy resistance, the Brigade captured the bridge, thus thwarting enemy’s plan of any offensive in the area. 86 Infantry Brigade had the privilege of being the first formation to hoist the tricolour in the captured territory of Western Pakistan in 1971.

Pakistan held the Jassar Enclave with concrete pillboxes constructed on various bunds in the area and interconnected by brick lined communication trenches. The whole area was marshy and covered with a thick growth of sarkanda (elephant grass). The enclave was obscured from the Indian side by tall trees and worthwhile information of the enemy could not be collected. The enemy defenses consisted of a series of concrete embankments having anti-tank guns and both light and heavy automatic weapons. Pakistan was known to have three Ranger posts within the enclave. These were likely to be augmented by about two companies (one regular and one Ranger) and MMG and RCL guns of reconnaissance and support elements on the outbreak of hostilities. It was a tough nut to crack.

The Eastern end of the objective consisted four bunds emanating in all directions. It formed an area of Tactical importance occupied by the Battalion headquarters and a Company supported by MMGs and RCLs. A Dhussi Bund branched off from the rail bund till Mardana. This bund was well defended with MMGs and RCLs including a small concrete building called the Colonels Hut. To the south of the Dhussi Bund were seven mounds covered by scrub. The river line and the bridge had many emplacements and defences. The enemy had deployed two regular companies to defend the bridge.

The plan was set into motion with a Company of 4/8 GR occupying the Mardana Enclave to block any Paki interference. 17 RAJPUT and Brigaded Ghatak Company secured a crossing across the Ravi R by the morning on 6 Dec.

Phase 1 commenced as scheduled. Progress was however slow due to thick growth and deep waters in the river. The tanks could not cross the River and moved along its banks. The agile Brigade Commander made a quick change to the tactical plan and launched the Phase 2 with 1/9 GR. The Gorkhas launched a swift attack despite heavy fire from the enemy and cleared the objective upto the Eastern edge of the bridge by 6 PM on 6 Dec. The enemy abandoned their positions after an intense hand to hand fighting with the Gorkhas.

The DOGRAs crossed the River and attacked the well defended Eastern Bund. The enemy was surprised by this attack from their rear. The surprise was so complete that when the advance guard of the DOGRAs reached close to the objective, one of the Pak sentry unable to differentiate friend and foe in the dark urged them to move faster since the Indians had launched an attack on the enclave.

The Bund was captured by 4.30 AM with accurate fire support from 71 Armoured Regiment and 42 Field Artillery Regiment (Now a Medium Regiment). 17 RAJPUT meanwhile cleared the remaining two posts in the enclave. In desperation the Pakistanis destroyed the first pier of the bridge. The presence of tanks wore down the resistance considerably. A troop of the enemy’s Chafee tanks were in the enclave to support their infantry. However, on hearing the rumble of the T-55 tanks of the 71 Armoured Regiment, they tried to make a hasty retreat towards the rail-road bridge and got bogged down in the Ravi.

71 Armoured Regiment was raised in Ahmednagar in Jan 1971 and before it was a year old, it had the honour of being launched into battle; the Regiment earned the sobriquet ‘The Gallant Infant’.

During the 10 DOGRA attack, Captain Devinder Singh Ahlawat was leading a company. His company came under intense fire from a concrete pill box. With complete disregard for his own safety, Captain Ahlawat charged the pill box, grabbed the red hot machine gun barrel with his right hand and threw a grenade inside. This silenced the machine gun and helped in maintaining the momentum of the attack. While the objective was over-run, Captain Devinder Singh Ahlawat lost his life. His body was found with six bullet wounds, still clutching the machine gun barrel. He was awarded the Maha Vir Chakra (Posthumous).

To aid the progress of the main attack, a subsidiary operation to secure the Jassar railway quarters north of the river was also executed.

The intimate integration of all arms, infantry, armour and artillery promoted success. It was a neat operation which points to the need for unorthodoxy in tackling a tactical problem in war.

All the Battalions of 86 Infantry Brigade were awarded the Battle Honour Dera Baba Nanak.