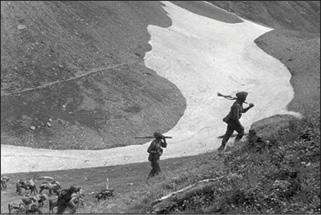 “The break through at Zojila was one of the three most crucial battles fought by the Indian Army in 1947-48. It is a saga of super human efforts, grim and successful struggle waged by the Soldiers of Indian Army to achieve this aim.” -Dr Sudhir S Bloeria, IAS (former soldier), Doctorate on the Battle of Zojila

Super human effort it was indeed. Zojila (Path of Blizzards) is a strategic pass between the Kashmir  Valley and Ladakh at an elevation of 3529 Metres (11,578 Feet) in the Great Himalayan Range 100 Km from Srinagar. Extremely narrow, Zojila experiences vicious winds and very heavy snowfall of upto 50 feet. The pass itself is 3 KM long with massive features 4000 – 5000 Metres dominating it. The pass overlooks snow-covered summits with steep and slushy slopes, rocky mountainside and unpredictable weather on both sides. The dizzy heights require acclimatization for humans to be effective on top.

Unknown to the Srinagar Division, by mid-May Pakistani raiders had occupied Kargil, Gurez and surrounded Dras; all ingress to Leh by land was virtually denied to the Indian Army. Leh was defended by a rag-a-tag band of defenders from the Maharaja’s Army which was reinforced by Major Prithi Chand and 40 Other Ranks of 2nd Battalion, the DOGRA Regiment on 8 March after an arduous trek over Zojila; the situation was indeed grim.

Not yet aware of the deteriorating situation across the Zojila, Srinagar Division on 13 May ordered 1st PATIALA (The Rajindra Sikhs), now 15th Battalion, the PUNJAB Regiment which had just arrived from Jammu to move one company to Sonamarg for undertaking vigorous patrolling towards Dras. ‘A’ Coy under Major Joginder Singh, with a section of 3″ Mortars left Srinagar on 13 May, but was held up at Kangan due to snow slides. It reached Sonamarg on 17 May.

By now, with additional inputs coming in, the situation became clearer to the Division HQs and 1st PATIALA under Lt Col Sukhdev Singh was ordered to recapture Kargil. The battalion did not have winter clothing, they were not acclimatised, and, they had never been deployed in snow. Despite these extremely difficult conditions the battalion was to make a mark for itself by their daring exploits.

A Coy and a section of 3” mortar reached ZojiLa on 21 May and took positions to occupy Gumri. Further advance was however prevented by a burnt bridge over a fast-flowing mountain stream. A Platoon patrol was sent to investigate. It came under heavy fire from a well-entrenched enemy of about a company strength from a dominating feature. The platoon fought back with great determination and suffered heavy casualties including the platoon commander JemaderHardev Singh who was killed while rallying his troops, his body was later evacuated with 40 bullet wounds. He was awarded the MahaVir Chakra and two others the Vir Chakra. Despite heavy odds the patrol kept engaging the enemy for over four hours. Meanwhile a strong four platoon force was sent to support the platoon and evacuate casualties who were vulnerable to enemy fire and frost bite. The attackers had to climb a very hazardous wet and slushy slope. Undeterred, they charged up the slope with aggressively shouting their battle cry ‘Bole So Nihal, Sat Sri Akal’. The enemy retreated in fear leaving behind 21 dead bodies and suffering over 50 injured. This daring attack under exceptionally difficult conditions was recognised by the award of four Vir Chakra.

For the first time since Nov 1947, the Pakistanis had met more than their match in the Northern High Altitude Hill Sector and were decisively beaten. 1st PATIALA too quickly learnt it lessons for operation at these heights and weather. In order to exploit beyond and capture Dras and Kargil, additional troops were required which were not available. The battalion continued to hold defences and carried out aggressive patrolling and raids. A Coy each of 1 MAHAR and 2 MADRAS came under command 1st PATIALA.

Leh was cut off from the land route, it also had no airstrip, it was therefore crucial to establish one to defend Leh. A temporary strip was prepared and a daring trial landing was made by Air Commodore Mehar Singh with Major General KS Thimayya, General Officer Commanding 19 Infantry Division as a passenger in a flight of Six Dakotas of 12 Squadron on 24 May 1948. Flying over 24,000 feet, these sturdy aircraft negotiated the towering Himalayas and landed on the sandy airstrip at 11,540 feet; a world record then. This would provide the region a vital air link.

The Pakistanis understood the importance of ZojiLa and the Gumri Basin for maintenance of Ladakh well. They were therefore very keen to dominate these heights and prevent any reinforcement by road. They kept building up their strength with hardy hill tribesmen to dominate vital Lines of Communications to Ladakh. They made repeated attempts to break though the PUNJAB defences but were beaten back with ferocity. Very sustained and continuous attacks were made for 19 days from 18 June to 6 July; these made the men of 1st PATIALA very tired and weary.

Fresh troops were required for counter attacks on the Pakistanis positions to provide strength to the defences of ZojiLa. General Thimaya’s hands were however full with operations in other sectors and no additional troops could be made available. In a revised defensive plan. Machoi and Gumri were withdrawn tactically during the night of 6/7 July 1948. Zojila was captured by the Gilgit Scouts of the Pakistani Army on 7 July 1948. These hardy mountain tribals were quite at home at these heights in comparison to the defenders. A Company plus of the Gilgit Scouts soon set up defences using the rough high-altitude terrain to advantage.

With approaching winters and the growing presence of the Pakistanis, plans were made to finally evict the raider. 77 PARA Brigade was inducted and 1st PATIALA placed under command. 1st PATIALA (15th Battalion, The PUNJAB Regiment) in over an month defended Zojila and surrounding areas with absolute determination. The battalion was rewarded with eight MahaVir Chakras and 18 Vir Chakras in this war. Most of them were won in battles fought around ZojiLa, it is a record unbroken till date.

77 PARA Brigade quickly launched an offensive to evict the raiders. The weather, altitude and the well-entrenched enemy played spoilsport and the under acclimatized brigade failed to achieve its objective set for the Operation code named Duck. The Army Commander, Lieutenant General KM Cariappa sensing a need for infusing greater vigour into the operations ordered the name to be changed to Bison. He also ordered deployment of Straut Mk-IV tanks of 7 LIGHT CAVALRY Regiment to carry forward the operation to capture Zojila. Time was at a premium and if Leh garrison was not relieved by Nov 1948 the whole of Ladakh would be cut off due to heavy snowfall.

A squadron of the tanks was brought from Akhnoor a distance of 445 KMs; it took about a fortnight. The operation was conducted in absolute secrecy and codenamed ‘Sparrow’ after the nickname of commandant of the 7 CAVALRY, Lieutenant Colonel Rajinder Singh. The Stuart tanks were stripped of their turrets to look like Bren gun carriers and then brought by night. The tanks reached Baltal on 15 Oct, were concealed in an enlarged cave in the lee of the pass. The turrets were fixed and the Goliaths were ready to roll.

During this time, two Companies of the Madras Sappers were working against all odds to prepare a track for the tanks to stage forward for the assault. Within a month, they prepared an 8 KM battle track by cutting deep into the rock face for the tanks from Baltal to Zojila. The remarkable task was performed despite frequent snowfall and enemy mortar shelling.

Finally, when the operation commenced on 1 Nov at 10 AM, the weather was at its worst with dense fog, snowfall and strong winds. At places, the 11 tanks had to be pushed up the steep gradients. As a precaution against accidents, the drivers rode in the tank and the crew walked behind. The trail often got so narrow that the tread overlapped the edge. The tanks reached the top without any major hitch for the final assault. The assault was supported by two regiments of 25 Pounders, a regiment of 3.5 Inch Guns and tempest aircraft. One Coy of 15 PUNJAB walked behind for the mopping operations. The shocked Pak defenders in contact reported to the Pak sector headquarters. The response from the other end was that of suspicion and doubt, they ridiculed the report and rubbished it as a hoax by the Indian Army to pass off jeeps disguised as tanks. To the surprise of the tankmen, General Thimayya hopped into the lead tank. His action added greater strength to the assault. The bewildered Pakistanis either fled or were vanquished.

This was perhaps the first case of ‘Shock and Awe’. The tanks destroyed the enemy’s strong defences while infantry mopped up the slopes. The disorientated Pakistanis were hunted out from their caves and killed. The enemy who had held the pass since July was pushed to Matayan. By 2.40 PM the tanks were in control of the Gumri Basin. This was indeed the turning point of the battle in the region.

There is no other known conflict in the world where tanks were used at such altitude. Full credit for this successful venture must go to Thimayya and Sparrow two very brave and thinking leaders. An overjoyed Army Commander Cariappa sent his congratulations and directive: “Advance forward to Kargil with all speed. Give no rest to the enemy until you have joined with Leh.”

After this big victory 77 PARA Brigade moved on relentlessly and captured Dras and Kargil on 16 Nov and 21 Nov respectively. Another Indian column had proceeded from Leh and, brushing aside enemy resistance in Nimu and Khaltsi, joined with the Indian troops at Kargil on Nov 24. With this link up, the Leh and Kargil areas had been saved from falling into Pakistan’s hands. Skardu, the rest of Baltistan and the entire Gilgit region, however, could not be retrieved and remain under Pakistani occupation.