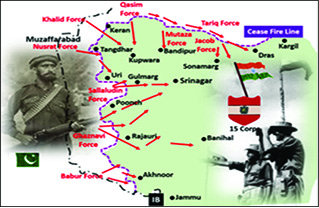 General Mohammed Ayub Khan, sent the commandos into India after being fed apparently ‘doctored reports’ that the valley’s Kashmiri population was ready to revolt against ‘Indian occupation’. But this never happened, and the commandos ended up getting trapped in the region after the Indian Army cut off their escape routes, leading Islamabad to broaden the war front. -Gohar Ayub Khan, Ayub Khan’s son and Pak Politician

Gohar Ayub Khan, Ayub Khan’s son and Pak Politician: Battle honours, are awarded as recognition and to record a unit’s active participation in battle against a formed and armed enemy. Units eligible to be awarded such honours are those whose purpose is to close with and defeat, neutralize, or destroy the enemy.

Handsomely equipped, by 1965 Pakistan was ready for war with India. Skirmishes took place in Kutch and there were Cease Fire Line violations in Jammu and Kashmir. Pakistan drew up a brazen plan to infiltrate Jammu and Kashmir to induce insurgency and destabilize the region. Op Gibraltar was launched in August 1965, Pakistan Army soldiers of the Special Services Group (SSG), Mujahids (Muslim warrior) and Razakars (Volunteer Guerrilla), disguised as locals entered the state.

Every infiltrating commando was given two rifles and additional ammunition; one to fight with and the second to be distributed to locals to fan what was called a “massive indigenous war against Indian occupation”; belligerence bordering on comical foolhardiness.

The infiltrators were grouped into ‘10 Forces’ each comprised of six units of five companies. The force was commanded by a Pakistani Army Major and was allotted a code name. Sadly, for them the fairy tale strategy went terribly wrong; Kashmiris did not cooperate as anticipated and thousands of infiltrators were trapped by Indian forces and annihilated. Infiltration commenced on 5 August. Initially, about 1,500 infiltrators crossed over in small batches and concentrated at selected rendezvous. The second batch of infiltrators was pushed in during the third week of August and comprised 6,000 infiltrators.

By first week of September another group was ready for induction but could not be sent due to the Indian Army counter-offensive. Many infiltrators were captured, liquidated or exfiltrated broken and demoralized; within a week, Op Gibraltar had collapsed; it was an unmitigated disaster.

Fed up with Pakistan’s repeated violation of the Cease Fire Line, the Indian Prime Minister Shri Lal Bahadur Shastri decided to take the fight to the enemy camp by crossing the Cease Fire Line; Pakistan never expected such an audacious response. The plan involved capturing critical areas in Hajipir, the Kishanganga Bulge and Kargil heights to contain and prevent further infiltration.

The iconic Hajipir Pass ignites great passion and fervour in the minds of every soldier both Indian and Pakistani (they lost it and we conquered it to return it later in a diplomatic faux pas). It is located at an altitude of 2,637 metres (8,652 feet) in the formidable PirPanjal range (in Pak Occupied Kashmir) which divides Srinagar Valley from the Jammu region.  It is through this pass that a wide, metaled highway connected Srinagar to Jammu via Uri–Poonch–Rajouri (all in India) prior to 1948. It was over this that the bulk of passenger and trade traffic used to ply.

The pass itself is dominated by three hill features: Bedori (3760 metres) in East, Sank (2895 metres) in West and LediwaliGali (3140 metres) in North West. All of these features combined to form a salient into the Indian Territory, known as the Hajipir Bulge. The Hajipir Bulge offers many infiltration routes into Kashmir valley and Pooch-Rajouri sector with Hajipir pass providing a vital logistic base and staging area. The capture of the Hajipir Pass by India would not only deny Pakistan the launch pads for infiltration but also be a great morale booster for the Indian Army.

Accordingly, 68 Infantry Brigade (1 PARA, 19 PUNJAB, 4 RAJPUT, 6 JAK RIF, 6 DOGRA and 164 Field Regiment) was tasked to capture the pass, D Day was fixed as 25 August but had to be postponed to 26 August due to bad weather. It was estimated that enemy dispositions in the area of operations facing 68 Brigade totaled up to some three and-a-half battalions or 14 rifle companies, of which about one battalion strength was deployed opposite Point 8370 held by own troops. The defence positions were well prepared and coordinated with heavy Machine Gun and Light Machine Gun fire support. Considering the terrain and enemy dispositions, the Brigade Commander decided on a two-pronged simultaneous attack to capture the Hajipir Pass along its Western and Eastern approaches (1st Battalion, the PARACHUTE Regiment and 19th Battalion, the PUNJAB Regiment).

The predawn attack on 26 August was preceded with intense shelling and softening of the objectives. 1 PARA commenced the attack on SANK (2895 M): a formidable feature with well-prepared defences, barbed wires and mines. Unfortunately, the attack failed despite some very intense close quarter battle on a very wet and slippery ridge; even gaining a foothold was becoming difficult for the attackers. It was best to break contact and plan a night attack on 27 August with additional firepower.

When darkness settled on the steep hillside, a daring attack supported by Machine Gun fire was launched. The enemy confident after its initial success in breaking up the assault was unsettled with the intensity of the fresh assault and fled leaving behind heavy weapons and 16 dead. The valiant attackers decided to press home the advantage and reinforce success by continuing to exploit further to capture the LADEWALI GALI (3140 M) by 2 PM on 28 August.

The mood after capture of SANK was upbeat, Major Ranjit Singh Dayal, the leading company commander wanted to head straight for the terminal objective, the ‘Hajipir Pass’. (Brigade Phase 2 of the attack tasked to 4 RAJPUT). This was an unprecedented request, however the Brigade Commander sensing victory and taking a calculated risk decided to press on, permission was immediately granted.

Often the difference between a successful person and a failure is not one has better abilities or ideas, but the courage that one has to bet on one’s ideas, to take a calculated risk – and to act. -Andre Malraux, French novelist, art theorist.

After an arduous climb all night, the column reached the Uri – Poonch road at 4.30 AM on 28 August about 10 km below the pass and settled down for a much-deserved rest. They then moved along the road and were close to the pass by 9 AM. The enemy was truly surprised because the dark night, heavy rain and fog had covered the move of the raiders till they were right on their door steps. They immediately brought down heavy automatic fire from the western shoulder and the pass itself. Making another daring decision, Major Dayal decided to climb a tough spur leading to a high ground above the pass and then roll down on the enemy. He was confident of his well trained and motivated troops and could take these bold and audacious decisions.

“The Weather was happy with us and suddenly came the rain which in its wake brought low hanging clouds providing much needed natural camouflage.” Major Dayal would recall later.

The enemy never imagined this could happen; he was surprised, shocked and checkmated. From their dominating perch, the raiders of 1 PARA swooped down on the defenders silenced the offending automatics and rolled down towards the pass which was captured at 10 AM hours on 28 August in broad daylight. The Pakistanis suffered a serious setback despite occupying strong defences.

The official announcement of the capture of the Hajipir Pass was announced in the Indian parliament on 29 August 65 and all the members gave a standing ovation. The delay in the announcement by one day was to ensure that any counter attack by the enemy would be taken care

The eastern thrust was much slower and encountered stiff resistance at Bedori and Besali. 19 PUNJAB however kept on relentlessly and linked up with 1 PARA on 1 September. 93 Infantry Brigade moving up from the south (Poonch side) achieved a linkup at Kahuta on 10 September to close the mouth of the bulge and the entire Hajipir bulge came under the occupation and control of the Indian Army.  The capture of the Hajipir Pass was good news for India and very bad for Pakistan; it shook their strategic and dominant mind-set. The enemy brigade was stung by this loss and counter attacked on August 29. 1 PARA repulsed the counter attack and over the next two days captured a few other features and consolidated their position. They held firm till the cease-fire.

The fall of Hajipir completed the linkup of Uri with Poonch and the road was hastily and efficiently restored by the sappers. The strategic Jammu–Rajouri–Srinagar road, which had been in disuse since 1947 had become functional once again.

After this success, many enemy posts continued to be captured by 68 Infantry Brigade and 93 Infantry Brigade of the 19 and 25 Infantry Divisions respectively, right up to Kahuta. Kahuta was captured subsequently with the combined efforts of 19 PUNJAB and 6 DOGRA Regiments. Brigadier ZC Bakshi, commander 68 Infantry Brigade was awarded the MahaVir Chakra (MVC). 1 PARA earned one MVC, awarded to Major Ranjit Singh Dayal, one Vir Chakra and four Sena Medals and the Battle Honour Hajipir. The battalion lost 16 brave soldiers.

An interesting anecdote to the battle for Hajipir is that, the Pakistani Army apparently offered a prize of Rs 50,000 for the head of Major Ranjeet Singh Dayal. This was discovered through a radio intercept of a Pakistani officer telling his comrade, “I wish I had Major Dayal’s head. I could get fifty thousand rupees from the Pakistani Army.”

The loss of Hajipir Pass, the principal logistic base of the infiltrators on 28 August and Indian successes in the Neelam Valley and opposite Uri on 29-31st August 1965 unnerved the Pakistani GHQ who assumed that Muzaffarabad was about to be attacked! The supposed liberators of Indian Held Kashmir were now more about saving what they had held before commencement of hostilities. It was under these circumstances that the Pakistani GHQ ordered execution of Operation Grand Slam with the aim of relieving Indian pressure against Muzaffarabad!