Sub Title : At the doorsteps of Lahore 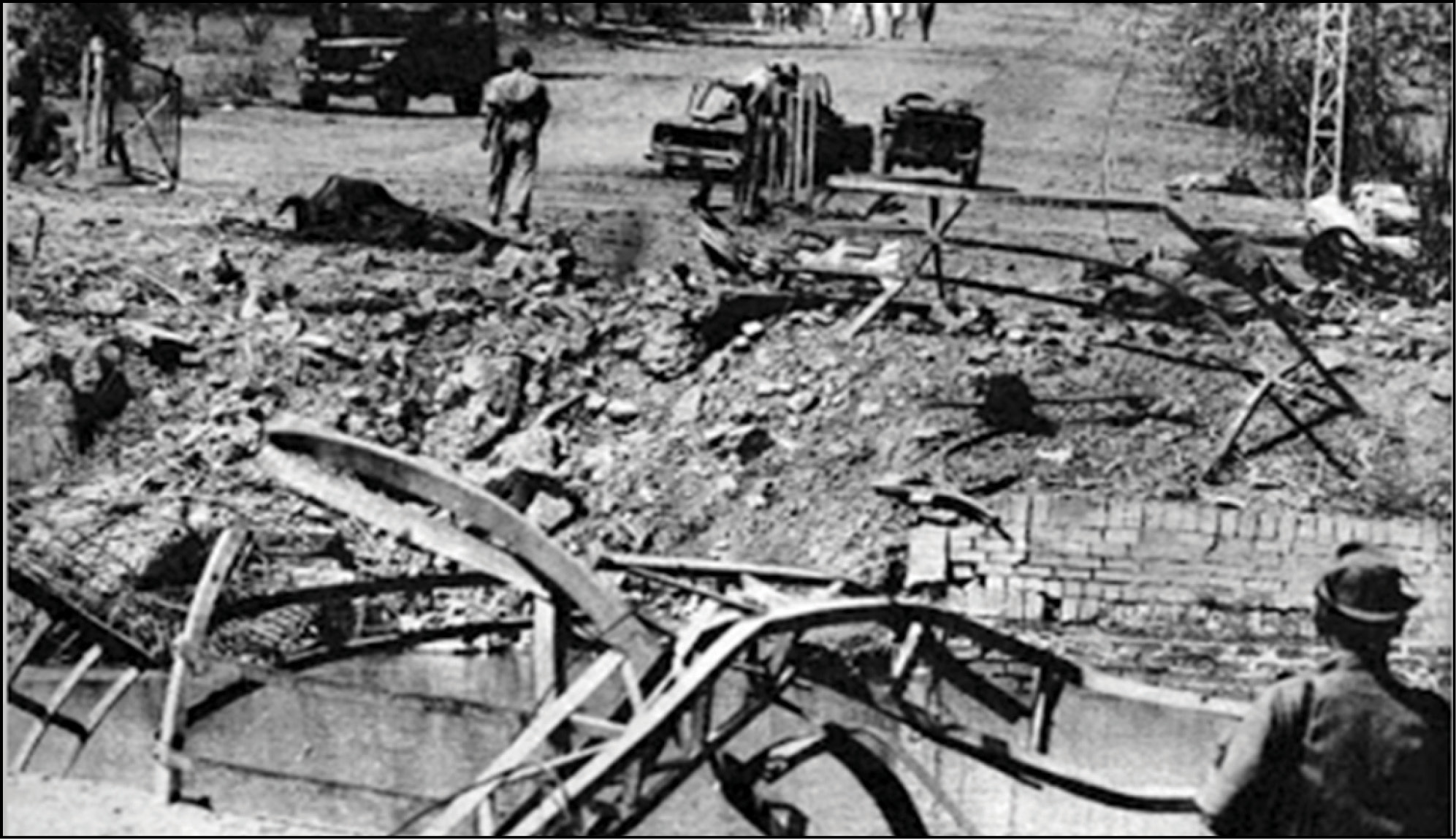 We are going to capture Dograi or die there, look for me in Dograi, you will find me there alive or dead. –Lieutenant Colonel Desmond Hayde, CO 3rd Battalion the JAT Regiment

Pakistan started the 1965 war with a misadventure in Kashmir. India retaliated in the Ravi – Sutlej corridor; popularly known as Doaba (Land between two rivers).

Pakistan’s 10 Infantry Division was responsible for defence of Lahore.

Dograi is a sizeable town on the east bank of Ichhogil Canal astride Amritsar- Lahore Grand Trunk (GT) Road. It was prepared as a formidable strong point to defend against sustained attacks. There were well sited and camouflaged pill boxes with minefields, minefield nests and contingency positions creating a false frontage and providing depth to the main defences; the enemy had selected and prepared his killing areas well.

54 Infantry Brigade crossed the International Border at 0400h on 6 September to establish a bridge head by first light before the enemy air could retaliate. After crossing the border, 3 JAT commanded by Lieutenant Colonel Desmond Hayde attacked and cleared village Dial by 0700h after an intense hand to hand fight. With first light came intense air attacks by Pakistan Airforce. Many vehicles astride the GT Road were destroyed and some carrying ammunition blown up. 3 JAT lost most of its Recoilless Guns and Heavy Mortars and their Second in Command. The radio detachment had not yet fetched up, the Artillery OP had lost his radio set and the Regiment was devoid of any Radio Communications to the Brigade HQs and Artillery support.

Despite the reverses, Lieutenant Colonel Desmond Hayde accepted the challenge to march on. Just past 0900h, 3 JAT advanced to the canal with a troop tanks (four tanks). Near Dograi, the battalion came under intense accurate artillery fire. After some searching, the Pakistani artillery OP guiding the fire was shot out of a tree, and the artillery fire stopped.

The battalion moved audaciously and attacked Dograi from the north. So fierce was the attack that after a stiff fight, one company of 3 Baluch defending Dograi ran back over the debris of the bridge on Ichhogil, which had been partially demolished a little earlier. By 1130h, 3 JAT was in full control of Dograi and the canal bank. However, it came under heavy machine gun, mortar and observed artillery fire from tall buildings across the canal. Hyde decided that offense was the best recourse and aggressively led two companies across the demolished bridge on Ichhogil Canal to secure Batapore left of the GT road and Attok Awan on its right. By midday 3 JAT had full control over Batapore and Attok Awan, ‘across Ichhogil Canal’. A firm base and bridge head was now available for an assault and Lahore lay a stone throw away.

Ironically the battalion which had lost its wireless set in the air raids and was out of communications with the Brigade HQs. There was also no follow up force to exploit the favourable situation created by the brave JATs. No commander had come forward to assess the situation and the damaged bridge was crumbling away. Lieutenant Colonel Hayde was seriously concerned about the fate of his two companies across the canal. At about 1500h, the tank troop commander, informed Hayde that his squadron commander had asked him to pull back to Ghosal-Dial. The gallant 3 JAT had no other option but to pull back the companies from across the canal and abandon Dograi. They were back in Ghosal-Dial by 1700h. Their valiant fight which had taken the Indian Army to the doorsteps of Lahore remained unexploited.

The battalion settled down as a part of the Brigade Defended Sector around Santpura. Even here they continued with aggressive patrolling and tank hunting.

On 17 Sep 3 JAT was ordered to recapture Dograi in conjunction with 1 PUNJAB by the morning of 22 Sep; the enemy was now even more prepared than before. The battalions were determined to throw the Pakistanis back across the Ichhogil once again. After detailed planning, probing attacks and fighting patrols were launched to harass and confuse the enemy.

Dograi would be retaken inch by inch and drop by drop of blood in a gruesome battle with very heavy casualties.

The battalion left Santpura at 2300 on 21 Sep hours with close support from the Brigade Artillery. By 0115 hours, they were in the Assembly Area. Here they were informed that 13 PUNJAB who had attacked MILE 13 could not make much headway. This attack however had divided the enemy’s attention from the 3 JAT attack which was to its tactical advantage.

The assault began at 0200 Hours. With two companies; Charlie and Delta ahead.

Delta Company found the old village empty and wheeled right to new Dograi. Charlie Company on the right came under intense fire from the canal bank and there was a brief pause. One platoon of Delta Company, following Charlie Company, charged through to attack the depth positions. Soon the defender, a mixed company of 12 Punjab (Pak) and 18 Baluch were routed. So ferocious was the fight that of the seventy three men of Charlie Company who had charged the enemy, only twenty seven were left standing.

This initial success was followed by house to house clearance and bloody mopping up operations. During the intense hand to hand fighting in the narrow streets and rubble it was not always the enemy who came into the sights, it was often a JAT from another assaulting section. Only their load rustic shouting prevented serious fratricidal clash. By 0400 hours the Pakistani defenders were gripped by panic and started running away. JATs mounted their light machine guns on rooftops and picked off the fleeing Pakistanis. Bravo Company that was following Charlie Company passed through to attack the demolished bridge on Ichhogil Canal. They were met with intense fire from across and the leading section was completely wiped out. This did not deter the Company and they soon ejected the enemy platoon guarding the east bank. Alfa Company was tasked to hit the enemy’s tank harbour. They dashed ahead to surprise the enemy even while the main attack was building up and two enemy tanks were captured.

The JATs now regrouped quickly on the objective and prepared for a counter attack by the enemy. The first of the four counter attacks began with an intense barrage of artillery fire at about 0430 hours. The JATs were waiting and responded fiercely decimating the enemy and killing the Counter Attack Force Commander. The morning brought fresh surprises. Nearly two companies of 16 Punjab (Pak) were found to be still occupying their defences in the area of Mile 13 from where they were engaged in a firefight with 13 PUNJAB. This situation had dangerous implications, as 3 JAT was likely to be sandwiched between the counter attacks and these companies holding well-prepared defences.

Captain Jagtar Sangha, the Squadron Commander of Scinde Horse appreciated the situation, lined up two troops abreast the GT Road and charged the defences at Mile 13 with all guns blazing. Two of his tanks were hit with strim grenades but the charge was pressed home. The defenders of 16 Punjab (Pak) were so unnerved that they broke ranks and ran, several prisoners were taken including Lt Col GF Golewala, the Commanding Officer.

The second counter attack came at 0700 hours with intense shelling of Dograi and MILE 13. Swift and accurate retaliation with RCLs and Artillery firing in direct firing role unnerved the attackers and destroyed many of their tanks.

The Pakistanis remained determined and counter attacked again at 1000 hours. A squadron of Pakistani tanks attempted to outflank the entire 54 Infantry Brigade from North. RCLs of 1 JAT and 1/3 GORKHA Rifles of 38 Infantry Brigade deployed in the North were grouped to face the assault. An intense Infantry Tank battle ensued, the enemy tanks charged through the defences of one of the forward companies of 1 JAT, passing over their trenches. The brave JATs stood firm. After nearly an hour, the Pakistani tanks lost heart and withdrew leaving behind six burning hulks. A whole platoon of JATs was crushed under the tanks, both battalions suffered heavy casualties; 1 JAT alone had 65 dead. The gallant infantry men who had not flinched had triumphed even in death.

There was however no respite, the enemy continued shelling and snipers made movement through the rubble of Dograi for reorganisation and casualty evacuation difficult. By evening 3 JAT was reinforced by a draft from the JAT Regimental Centre and two companies of 13 PUNJAB. Nightfall brought ominous signs of a fourth counter attack. Alfa Company however discovered the enemy assembly area and using machine guns launched a spoiling attack against the enemy disintegrating his plans. The morning of 23 Sep revealed 65 bodies of soldiers from 8 Punjab (Pakistan); many more would have been wounded or even killed. By the night of 22 Sep four counter attacks had been beaten back with heavy loss to the enemy. The success at Dograi made the enemy position at Mile 13 untenable. The two enemy companies located in this area fled across the canal. By Sep 22, 13 PUNJAB had secured their objectives. Respite from fighting came only with cease-fire in the early hours of 23 Sep.

Islamuddin a Pakistani soldier who had once served in 3 JAT came to the west bank of Ichhogil canal on afternoon of 23 Sep and shouted across, “Only my old battalion could have done this!” What better tribute? The exceptional leadership and courage of the Commanding Officer Lieutenant Colonel Desmond Hayde was acknowledged with the award of a MahaVir Chakra.

The Battle of Dograi was fought in cold blood with determination and guts. In both battles for Dograi, 3 JAT suffered 5 Officers killed and 9 wounded, involving practically all officers of the battalion; 1 junior commissioned officer killed and 8 wounded and 82 other ranks killed and 214 wounded. The battalion won three MahaVir Chakras, four Vir Chakras, seven Sena Medals, 12 Mention-in-Dispatches and 11 Chief of Army Staff’s Commendation Cards. The enemy suffered heavy casualties of 509 killed, 400 wounded while 100 soldiers and officers were taken as Prisoners of War (POW).

The Dograi Battle will go down in history as one of the toughest ever fought. -Lt Gen Harbaksh Singh, GOC-in-C Western Command during the 1965 War.

In the Official History of the 1965 War, Dograi is mentioned as an, ‘Epic’.