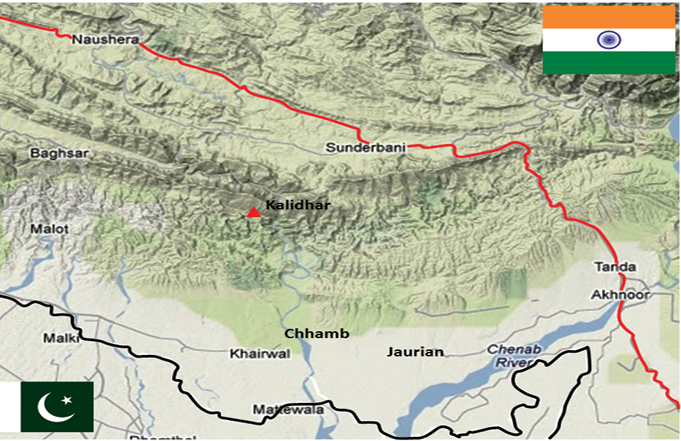 Battle honours are awarded as recognition and to record a unit’s active participation in battle against a formed and armed enemy. Units eligible to be awarded such honours are those who close in with and defeat, neutralize, or destroy the enemy

“The bravest are surely those who have the clearest vision of what is before them, glory and danger alike, and yet notwithstanding, go out to meet it.” –Thucydides quotes (Ancient Greek historians and author, 460-404 BC)

Although Cease Fire had been declared, war however did not end in Jammu and Kashmir. Despite suffering severe reverses and a near annihilation of its Force Gibraltor, Pakistan continued to support the remnants of the force with an aim to destabilise the Indian Army which was consolidating its gains. Some very intense and localised conflicts continued to be fought to evict remnants of the infiltrators, capture dominating features (called Key Defended Localities in the Military parlance) and realign the Cease Fire Line favourably.

The enemy too was making similar attempts, infiltrated in large numbers in the Chamb-Jaurian-Akhnoor region and occupied dominating features of Malla and Trig Point 3776 (also known as Kalidhar) in the Kalidhar Range located North West of Chamb. They were now well placed to dominate Sunderbani and posed a serious threat to the Road Naushera – Sunderbani – Akhnoor. In the strategic sense, their continued presence was a threat to the Jammu region and the illegal encroachments had to be vacated at all costs.

A deliberate Brigade attack by 191 Infantry Brigade Group of 10 Infantry Division located at Akhnoor and Sunderbani was planned. The following battalions were moved in to participate in the operations which commenced on 30 Sep 1965:-

1 MADRAS had been tasked to carry out small operations and nibble away into the enemy territory to counter the imbalance created by their incursions. Later when the situation became unstable in the Kalidhar region, the battalion was ordered to take up defence of the Jhang feature overlooking Sunderbani and be prepared for offensive operations. On 30 Sep the battalion received orders to attack the Malla feature, in the Kalidhar Range, which had been lost to the enemy two days earlier. The attack was launched at 0330 hours on 01 Oct. The battalion soon hit a well-located covering position ahead of the main defences and presenting a false frontage. Very heavy Artillery and Machine Gun fire by the enemy made progress slow and the assault on the main objective was considerably delayed.

Determined and resolute, the brave Madrassis charged the objective shouting their battle cry Veera Madrassi, Adi Kollu , Adi Kollu (Brave Madrassi, Hit and Kill, Hit and Kill!) Fierce hand-to-hand combat was fought and by noon the objective had been captured. The enemy brought down heavy artillery with a vengeance; but the battalion held on resolutely. 1 MADRAS was to man the Kalidhar Defences for more than three months, until relieved in early Jan 1966. The battalion suffered 88 casualties in all during the course of the war; 2 JCOs and 28 men killed, and 3 officers, 2 JCOs and 53 men wounded. They were awarded two Sena Medals (including Lt Col CPA Menon, the Commanding Officer) and five Mention-in-Despatches. The battalion was awarded the Battle Honour Kalidhar 1965.

Simultaneously, on 28 Sep, 6 SIKH LI which had operated in the Chamb Sector against Pakistani infiltrators and regular forces with gusto since beginning of the year was ordered to take two co-located hill features (called Twin Pimples) close to Point 3776 as a preliminary attack.  The climb was intense and steep, and the battalion put in a very daring and resolute assault to dislodge the enemy. The enemy responded with intense Medium Machine Gun and Artillery fire and launched three counter attacks even before the battalion could regroup after capturing the objective. The battalion responded with daring alacrity and two counter attacks were beaten back with the enemy suffering heavy casualties. The battalion too however suffered heavy casualties and was forced to withdraw from one of the objectives. They however quickly regrouped and limited the enemy from making any further gains on the feature. Quick readjustments were carried out and the captured objective secured.

Barely had the battalion regrouped that it was once again tasked to capture another feature Ring Contour. 11 MAHAR and a Coy of 3 MAHAR were tasked to launch simultaneous attacks on Pt 3776 from the South and West. The multidirectional approach was considered to keep the enemy guessing about the intentions and divert his attention and resources towards multiple threats. The approach taken by the MAHARI’S was extremely steep and slippery and the assault did not make good progress, however it kept the enemy pinned down and contributed to the success of the operation.

6 SIKH LI however continued to achieve success on the treacherous and slippery mountain slopes on the dark cloudy night. Heavy artillery shelling failed to dampen their spirits and the battalion fought on with intense furiosity. Their battle cry Jo Bole So Nihal, Sat Sri Akal (Blessed is the one who proclaims the Truth of God) echoed in the mountains. The objective was finally secured by 1430 hours on 4 Oct after a bloody hand to hand fight. The enemy was however unrelenting and launched three counter attacks support by heavy artillery; these were all repulsed inflicting heavy casualties.

The Brigade Commander decided to exploit the battalion’s determination and reinforce the success they had achieved and tasked them for the final assault on Kalidhar (Pt 3776). The Battalion was equally determined to press home the advantage and quickly re-organized itself for the assault. The firm base was provided by a company of 2 GRENADIERS. The assault commenced on the morning of 5 Oct. By now the enemy had their backs to the wall and were determined to hold the feature at all costs. Their defences were well prepared and coordinated. They had made good use of the difficult terrain and sited their weapons along the only approach. 6 SIKH LI was to face stiff resistance and the bloodiest fighting in the sector. The Commanding Officer, Lt Col PK Nandgopal nicknamed ‘The Wounded Lion’ led from the front and rushed the well-entrenched enemy. Once on the objective, the battalion went about its task of eliminating opposition ruthlessly and the feature was finally cleared of Pakistani intruders by mid-day on 5 Oct 1965; 44 Pakistanis were killed and over 50 wounded. The battalion’s courage, determination and self-sacrifice was adequately rewarded with one MahaVir Chakra (Lieutenant Colonel PK Nandagopal), two Vir Chakras, four Sena Medals (including two Posthumous); five Mention-in-Despatches (including three Posthumous) and one COAS’s Commendation Cards.

All the participating battalions were awarded the Battle Honour “Kalidhar 1965”.

The brave troops of 191 Infantry Brigade Group fought resolutely in the difficult and dangerous terrain of the Kalidhar Range. They had to face an equally prepared and equipped enemy supported by well-coordinated Artillery and Machine Gun fire. The commander used his forces well and reinforced success while the going was good. The morale and motivation of the troops was high, and the terrain and stiff opposition failed to dampen their resolve to achieve victory against all odds which they did.