Sub Title : A recurring lament of the Indian Navy has been about low budgetary allocations for the navy in the overall defence budget of the country. Given that it takes long term fiscal support to build a navy, the Indian Navy’s ambitious force development plan to include 200 ships and 500 aircraft by 2050 may be impacted. The article analyses related issues 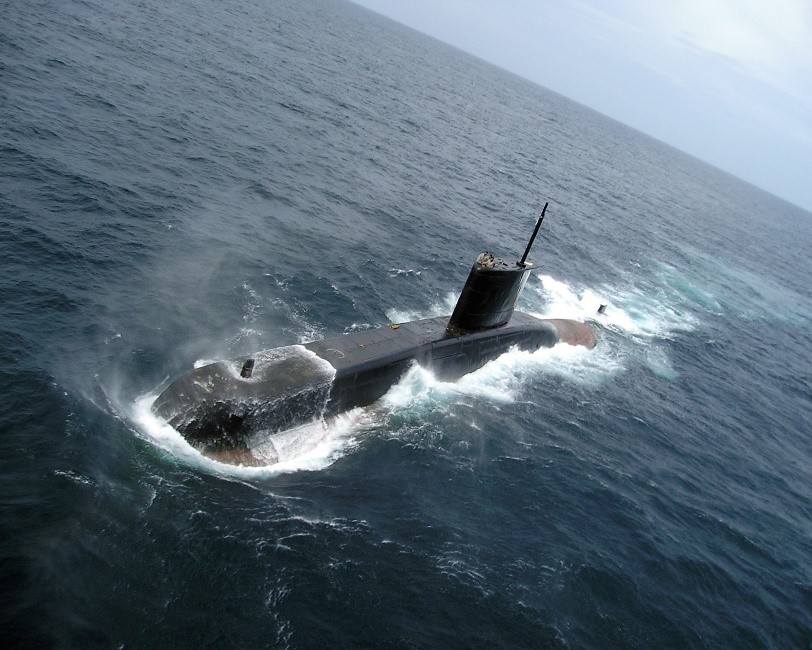 The MH-60R Sea Hawk helicopter has a range of 280 miles and boasts of a rich suite of sensors to include AN/AQS-22 low-frequency dipping sonar, sonobuoy launcher, the AN/APS-153(V) multi-mode radar, an AN/AAS-44 infrared/electro-optical sensor with a built-in laser-targeting system, Missile Warning System and ALQ-144 infrared jammer system. As far as the weaponry is concerned, it can launch Mark 54 lightweight homing torpedoes, fire laser-guided Hellfire missiles and 70-millimeter APKWS rockets. These helicopters will be deployed on board the new aircraft carrier Vikrant scheduled for commissioning in 2022, Delhi¬-class missile destroyers, the newer Kolkata-class and Visakhapatnam-class stealth destroyers and Shivalik and Nilgiri-class stealth frigates.

In the past, the Indian Navy had acquired from the US the P8-I, a long range maritime patrol, surveillance and anti-submarine warfare aircraft in two batches i.e. eight aircraft in 2009 valued at US$ 2.1-billion and a deal for four more aircraft was signed in 2016. There are plans to acquire an additional ten P8-I aircraft; apparently the plans have now been put on hold due to budgetary constraints.

These are all government-to-government deals and involve the Indian Ministry of Defence and the Foreign Military Sales (FMS) programme of the US Department of Defence. In the case of the P8-I there was a provision for a mandatory clause for at least 30% offsets to domestic companies and a similar clause is expected with regard to the sale of MH-60R Sea Hawk helicopter as also provision for long-term manufacture of 123 multi-role helicopters in India.

The continued US military sales to India merit attention. President Donald Trump was quite emphatic in his observation that the US “makes the greatest weapons ever made: airplanes, missiles, rockets, ships. We make the best. And we are dealing now with India.” The US-India defence and strategic ties are the core of the bilateral strategic partnership which has now been labeled as ‘global partnership’. It is fair to infer that the US would be willing to sell more military hardware to India which desperately needs to build up significant capabilities to confront the military prowess of China particularly in the Indian Ocean.

The focus is on building up anti-submarine warfare capability to detect Chinese submarines which have caused ‘sleepless nights’ for the Indian Navy. The Indian naval leadership has continually voiced the Chinese submarine threat and now there is a pattern in PLA Navy’s submarine deployment in the Indian Ocean. Admiral Karambir Singh, the current navy chief is unambiguous about the threat and has stated that “at any given point of time, they have at least 10 warships in the Indian Ocean.” The Chinese submarines have been ‘trawling the open seas’ and India must “watch it [PLA Navy} carefully and see how we can respond within our budget and the constraints we have,”

The Indian Navy has an ambitious force development plan to include 200 ships and 500 aircraft by 2050. In a report tabled in the winter session of Parliament, the Standing Committee on Defence said “Eighteen (Conventional) plus six SSN (nuclear-powered attack) submarines are planned but the existing strength is 15 and 1 SSN is available on lease,” Currently, Scorpene-class conventional diesel-electric submarines under Project 75 are being built at the state-run Mazgaon Dock Shipbuilders Limited in Mumbai. Another priority platform for the Indian Navy is the aircraft carrier: “Our plan is to build a 65,000 ton carrier possibly with electric propulsion and a catapult assisted take-off but arrested recovery (CATOBAR)”

A recurring lament of the Indian Navy has been about low budgetary allocations for the navy in the overall defence budget of the country. It has been declining and for FY 2020-2021 it has dropped to an abysmally low figure of 13 percent. Like his predecessors, Admiral Karambir Singh has stated that the Indian Navy requires a “long time fiscal support to build a Navy” given that warship building is a capital-intensive activity. Furthermore, “a very large proportion of every rupee spent on the Navy is ploughed back into the Indian economy” with “more than 60% of the naval budget dedicated to capital expenditure” and “nearly 70% of this capital budget being spent on indigenous sourcing, amounting to nearly Rs 66,000 crores in the last five years,”

It is the navy’s aircraft carrier plans that have attracted scrutiny. The Indian Navy has often argued that it must have three carriers so that at any time at least two can be operational and deployed.  A ‘three carrier force’ has been part of Indian Navy’s aspirations and was incorporated in its plans at the time of independence in 1947. The 1948 ten-year naval expansion plan visualized  two fleets, one each for Bay of Bengal and the Arabian Sea, centered on four aircraft carriers and 280 ship borne strike and fighter aircraft; but it did not fructify due to several geopolitical and financial constraints. Apparently, Lord Mountbatten told Jawaharlal Nehru “Your navy will never amount to much without an aircraft carrier.” The primacy of aircraft carriers has been central to the force structure of the Indian Navy and continues to this day.

However, there is skepticism about building a new aircraft carrier and General Bipin Rawat, the newly appointed Chief of the Defence Staff who is mandated to prioritize military procurement, has expressed reservations and observed that it is a ‘very expensive’ platform and may have to be put on the back burner noting that a third aircraft carrier would depend on “how the economy progresses.” The Indian Navy has been quick to defend its carrier plans and has argued that the “third aircraft carrier is an operational necessity’. Furthermore, it cannot be bought off the shelf and even if “permissions are given today, it will take 15 years for the carrier to be inducted.”

General Bipin Rawat also announced that the Indian government was thinking of restructuring the military into Joint or theatre commands (from the current 19 commands to 9) and some of these could be operational in three years by 2022. He also noted that a study was underway and “should be completed within three-four months and by the end of next year, the command under one naval commander should start functioning,”; it could be designated as the Peninsula Command. Apparently, this model is followed by the US and the Chinese military.

Closely associated is the issue of defence budget which is facing a crunch due to expenditure on defence pensions which take away nearly 28 percent of the budget leaving little for capital acquisitions. The Chief of the Defence Staff has noted that the “budget is more of a management issue rather than a funding one,” and given that the defence budget is unlikely to register a major jump, the remedy lies in right-sizing the 15-lakh strong armed forces and through optimal utilization of resources. It is the latter which merits attention of the Indian Navy.

Global trends do indicate that sea based carrier aviation remains popular among the navies and nobody seems to have yet ‘written the obituary’ of the aircraft carrier. It is a versatile platform and possesses formidable capabilities for operations across a wide spectrum of threats both at sea and ashore. The US Navy continues to operate 10 carriers, and these are a common sight whenever there is a crisis in any part of the world. It plans to build two more carriers. The British Royal Navy would soon deploy its Queen Elizabeth carrier to South China Sea in 2021 and the French operate their nuclear carrier across the globe. The Chinese have ambitious plans to build at least six carriers while Japan and South Korea operate helicopter carriers which can, during crisis, embark fighter jets such as the F-35 C. Admiral Kuznetsov, the only aircraft carrier in the Russian Navy is not in good operational health, but there are plans to build 90,000 tons carrier named Lamantin (project 11430E) designed by the Nevskoye Design Bureau in St. Petersburg, it would be capable of operating nearly 60 aircrafts. Another competing platform being offered to the Russian Navy is called the Shtorm (project 23000) designed by the Krylov State Center.

Notwithstanding the above trends, the cost of building and the vulnerability of these behemoths has been a subject of debate and discussion including being referred to as ‘white elephants’. It has been argued (in the context of the US Navy) that “in an era when personnel costs – including healthcare and pensions – are consuming the military from within, the fact that these craft require 46 percent of the Navy’s personnel to man and support, places them in the crosshairs in an extreme budget-constrained environment.”

There is also a debate within the US Navy about having a relook at future plans for surface combatants. A recent study by the Center for Strategic and Budgetary Assessments has observed that the “New concepts for surface fleet missions… will increasingly rely on unmanned systems to perform sensing operations because unmanned systems can achieve the proximity or distribution to use passive sensors effectively or employ active sensors at acceptable risk,” Furthermore, “Engagements will largely continue to be ordered by a human operator, although that operator may be on a nearby manned platform and the weapon launched by an unmanned vehicle. Unmanned systems would conduct almost all counter-[surveillance and targeting] missions; they can make risk-worthy decoys or employ active countermeasures without exposing a manned platform to detection and attack.”

Although it will be incorrect for the Indian Navy to internalize the US naval thinking and its approaches to fight wars at sea (against China and Russia), there is a need to study the US concept of naval operations given that unmanned platforms would gain ascendency in future naval operations.

Finally, in the above contexts, it will be prudent for the Indian Navy to start discussing as also internalizing technologies such as Artificial Intelligence, Machine Learning, Big data, etc. which will become central to future naval operations. Also, the Indian Navy should explore the possibility of studying these technologies during Malabar series of joint naval exercises with the US Navy. The US Defense Secretary Mark Esper recently announced that the US “together with our allies and partners, must accelerate the adoption of AI and lead in its national security applications to maintain our strategic position, prevail on future battlefields, and safeguard the rules-based international order,”