Sub Title : A lucid and cogent exposition on the evolution of Beyond Visual Range Air to Air Missiles ( BVRAAMs) through the years. The article also covers details of BVRAAMs in our inventory, constraints of using some of the them in  our entire fleet as also our indigenous efforts in this regard 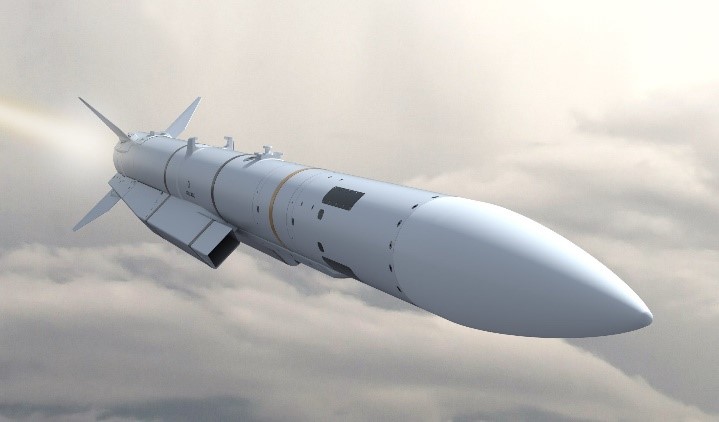 In a typical aerial combat, the air warrior who detects one’s  adversary first, who has his target on his cross-wires first,  who launches his arsenal first and most importantly, who launches  his munition keeping himself out of harm’s way by remaining out of the kill range of his adversary’s arsenal, lives to shoot another day. It is a battle of wits, it is battle of who beats whom in responsiveness, reaction time and above all, who has superior munition under his trigger.

While the aerial threat vehicles carry a large variety of munitions, like guns, guided and unguided rockets, bombs, missiles, active and passive electronic warfare weapons besides soft-kill munition, Beyond Visual Range Air to Air Missiles or BVRAAM for short, is one typical munition which provides the  type of capability stated in the para above.

This article looks at the evolution of  BVRAAMs over time  and brings the reader up to date to India’s status on this issue and the way ahead in the foreseeable future.

The Evolution over Time

By definition, BVRAAMs are air-to-air missiles (AAMs) that have the capability to acquire and track (implying lock for shoot)  their targets while in flight and engage them from a range of 37 Km (20 nautical miles) or beyond. With the above capability, it becomes possible for the air warrior to acquire track and engage his adversary while remaining out of the effective range of his munitions. A typical BVRAAM will have the means to acquire the target, navigate towards the same and destroy with its integral kill capability.

BVRAAMS have evolved over the last four-five decades. Initial BVRAAMs were ‘beam rider’ Missiles. While using such missiles, it was the mother aircraft that acquired the target and ‘illuminated’ the same by directing its radar beam on it. The ‘beam rider’ BVRAAM rode (implying guided by)  this radar  beam from launch till impact. Sparrow 1 fitted on a twin engine jet fighter F10 Skyknight which entered Service in US Navy in 1954 was a beam rider BVRAAM. This timeframe is also indicative of the era of this technology. Obviously the biggest downside of such weapons was that it exposed the mother aircraft to the adversary all the way from launch till impact. Also the rider beam remained highly vulnerable to electronic attacks/ interferences due to weather and environment.

As time passed Semi Active Radar Homing (SARH) BVRAAMs  appeared on the scene. In these weapons, the radar in the mother aircraft locked on to the target in a single target track (as opposed to multiple target tracking capability of modern day radars on aircrafts). The SARH missile had a tracker on board which could detect the reflected radar signals from the target being locked by the mother aircraft and ride its way to the target guided by these signals. In these class of weapons also,  the biggest disadvantage was that the mother aircraft had to illuminate the target from launch to impact however, the missile was little less vulnerable as compared to beam rider BVRAAM . AIM 7 Sparrow BVRAAM of US belonged to this category. These missiles had an operational service span from 1950s to around 1990s.

As time passed the semi active BVRAAM concept moved further making available BVRAAMs that were both
‘semi- active’ as well as ‘active’. By this time the radars on board the aircrafts also grew in capability from  a single target-tracking capability to multiple target capability at the same time. The BVRAAMs of this class rode the reflected radar signals from the target but as it neared the target, the active seeker on board the missile acquired the target and guided the missile till the end game independent of the mother aircraft. AIM 54 Pheonix was a BVRAAM of this variety. These types of BVRAAM belong to the era
2004-2006. F-14 Tomcat variable sweep-wing fighter aircraft carried such BVRAAM.

By around 2010 or thereabout the next generation of BVRAAMs appeared on the scene. These were truly ‘fire and forget’ weapons. Such missiles were equipped with own inertial navigation system (INS) which enabled them to lock on to their targets ab-initio. In fact, these missiles took off to the target with only initial target information. The secure two-way data link on board the missile was capable of receiving target updates from multiple sources such as mother aircraft of a third party source such as an AWACS or another air or ground based radar. Closer to the target the active missile seeker on-board the missile became operational and locked on to the target for the end game.  R 73 and R 77 BVRAAMs of Russian origin belonged to this class of weapons. It may be recalled that it was an R 73 BVRAAM which was launched by Wing Commander Abhinandan from his Mig 21 Bison aircraft that brought down  the  Pakistani F 16.

From this class to the current generation of BVRAAMs few more technological advancements took place. For instance, instead of carrying a single seeker, the BVRAAMs carried a dual seeker; one radar seeker and one infra-red (heat) seeker. Example of this class is the MICA BVRAAM of French origin which has a mono-pulse Doppler radar seeker and an IR seeker.

As time passed, the technological capabilities of the radar seeker, as well as, the active heat-seeker kept on improving. For instance, the radar on board was replaced with the
state-of-the-art Active Electronically Scanned Array (AESA) radar. These radars have phased array antennas which have the capability to electronically steer the radar beam in different directions without having to move the antenna and also have the capability to simultaneously transmit multiple waves at multiple frequencies making jamming of the radars that much difficult.

As regards the heat seekers, the passive heat seeking devices in some of the BVRAAMs were upgraded to Imaging Infrared (IIR) seekers. Such devices besides the traditional guidance function through the heat signature of the target also produced a target image in the infrared domain using the focal plane array of light sensing pixels situated at the focal plane of a lens. Such devices proved to be much more accurate and difficult to be led astray using decoys.

Redundancies were also built in the INS system by having a dual INS and GPS system on board.

Chinese BVRAAM PL 15 has all the above features. It has a Beidou GPS/INS system, an AESA radar-based seeker, as well as, an IIR seeker.

A word on Meteor BVRAAM

Meteor BVRAAM is a current generation state-of-the-art BVRAAM produced by MBDA and Thales which is carried by the French Rafael aircraft. It can take on long range manoeuvring targets, unmanned systems, cruise missiles and more, from a range of more than 150km (81 nautical miles). The missile, flying at Mach 4 has a No Escape Zone (NEZ) of 60 km. NEZ is a conical volume of space, with the point of missile launch sitting at the tip of the cone, in which there is a high (defined in percentage terms) probability of target kill even if the latter is alerted about the impending threat.

The mother aircraft is free to manoeuvre moment the X band seeker of the missile locks on to the target and goes ‘pitbul’ (activating its seeker and locking on to the target). The missile can also be launched in the ‘maddog’ mode where it will home on to the first radar source it contacts.

A Capability which we Need

The aim of covering Meteor in some detail is the fact that this along with Scalp cruise missile will be the mainstay of the weapon package in the 36 Rafael jets contracted from France. This will give India an unprecedented edge in
air-to-air combat capability. Something which the Indian Air Force requires operationally.

That said, it is learnt that while the Meteor are included in the Rafael weapon pack, MBDA has shown its reservations for possible Meteors on Tejas Mark1A or the Sukhoi 30 MKI stating that they will only integrate their missile on the European radars.

History has shown that such negative developments always prove to be a blessing in disguise as they catalyse indigenous efforts to fill the gap. This was probably best illustrated in the successful development of ISRO’s indigenous cryogenic engine amidst a severe technology denial regime post our overt nuclear tests.

We don’t have to go that far in the case of BVRAAMs as the indigenous capability has also caught up and is rubbing its shoulders with the front-rankers in the world. This is stated in the context of the Astra BVRAAM.

A Word About Astra BVRAAM

Astra BVRAAM has been designed and produced by the Defence Research and Development Organisation (DRDO). It is a BVRAAM with an operational range of 110 km in head-on mode and 20 km in the tail chase mode (chasing a receding target). The missile is guided in the mid-course by the Initial Guidance System while for the terminal phase it has an active radar homing seeker. Astra has a top speed of 4.5 Mach. The missile can be carried on several existing platforms such as Mirage 2000, Tejas Mk 1, Mig 29 etc.

Between the period 2003 and 2019 Astra has been test fired 29 times. The missile has matured through repeated tests and is now a fully operational weapon.

The future version of Astra (called Astra II) will have a range of 160 km and will be equipped with the Solid Fuel Ducted Ramjet (SFDR). SFDR is a niche technology and marks India’s entry into a select club of nations that use next generation missile technology against manoeuvring targets. SFDR technology boosts the performance of the missile by enhancing its strike range and improving its kill effectiveness thereby compromising the effectiveness of conventional threat missiles.

Astra II will have a range of 120 km and will have propulsion system based on nozzleless missile booster and a thrust modulated ducted ramjet wherein the flow of hot escaping gases from the engine will be controlled: dynamic gas flow controllers providing a very high degree of mobility to the missile

We require a BVRAAM capability for being equal to or better than our potential adversaries in any future air combat. The BVRAAMs of the class of Meteor are indeed state of the art but these are unlikely to be available on indigenous/Russian platforms as stated. Astra II our indigenous BVRAAM is state of the art and will hold us in good stead.