Celebrating the Liberation of Bangladesh: Dec 1971

Sub Title : Vijay Diwas celebrated every year on 16 December is a red letter day for the Indian armed forces 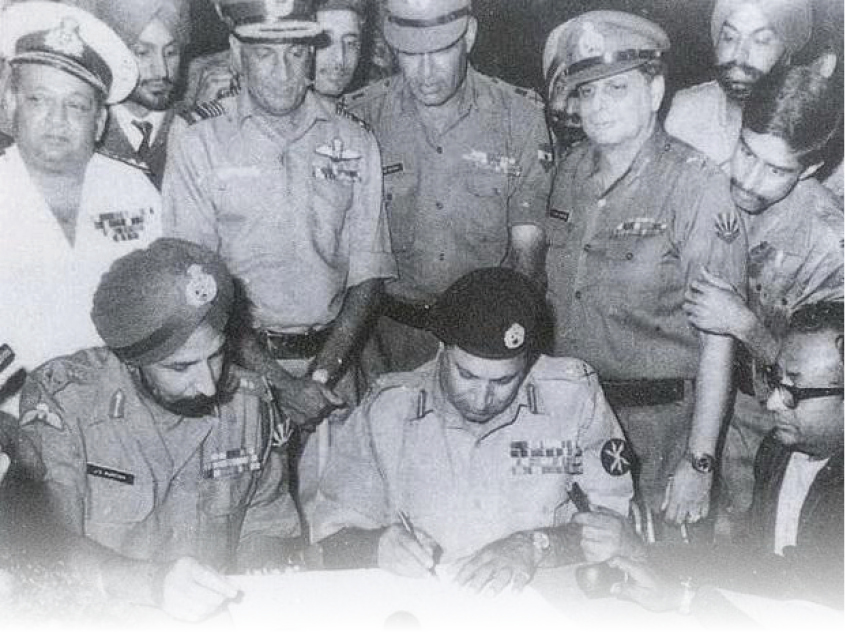 Vijay Diwas is celebrated every year  on 16 December. It is a red letter day in the history of the Indian armed forces. On this day in 1971 the Pakistani army in erstwhile East Pakistan, surrendered to our armed forces leading to the creation of an independent Bangladesh

Pakistan was not defeated; it was humiliated’.

General Staff of Pakistan, report on debacle of East Pakistan, in March 1972

A revolution and armed conflict sparked by the rise of the Bengali nationalist and self-determination movement in what was then East Pakistan resulted in a genocide committed by the Pakistan Army as a part of Operation Searchlight which was launched against the people of East Pakistan on the night of 25 March 1971. India came to the rescue of the hapless populace and liberated its suffering millions to give them a new nation Bangladesh. The lliberation of Bangladesh consequent to the 1971 Indo Pak War had over 90,000 Pakistani soldiers surrendering, the largest since World War II; a reason to celebrate now and every year. It was a great effort by the Indian armed forces – indeed a tri services triumph.

The Indian Army was able to reach Dhaka in a span of 13 days from the official start of the war on 03 Dec 1971, even as the domestic Liberation War, waged by the Mukti Bahini- freedom fighters led by the Bengali officers and men of the Pakistan Army’s East Bengal Regiment- had started much earlier. There was also  some activity by the Indian armed forces prior to 03 Dec 1971.

To defend East Pakistan, Lt Gen A A K Niazi, the GOC-in-C, had adopted a fortress form of defence occupying major towns hoping that before the Indian Army could break through them, international pressure would ensure a  cease fire. Major fortresses were created at Jessore, Jhendia, Bogra, Rangpur, Jamalpur, Mymensingh, Sylhet, Bhairab Bazar, Comilla and Chittagong. No deliberate defences were planned and no troops earmarked for the defence of Dhaka, as they never anticipated any threat. India’s Eastern Command set these Pak fortresses as its objectives.

The opening punch was an attack by 14th Battalion, the PUNJAB Regiment (Nabha Akal) to capture Garibpur close to the IB on the road leading to Jessore. The regiment was supported by ‘C’ Squadron 45 CAVALARY. There were hardly any intelligence inputs, but the battalion marched into unfamiliar enemy territory on Night 20/21 Nov, The Pakistanis responded ferociously next night. 14 PUNJAB Group countered them with alacrity and the morning revealed 11 enemy tanks destroyed and three abandoned in good condition; a complete participating enemy squadron accounted for.

On 23 Nov, 20 Mountain Division marched into the North Western Sector with an assault on Hilli. It soon developed into a slogging match against well-prepared defences leading to heavy casualties on both sides. Hard lessons were learnt, and Eastern Command strategy refined. Subsequent operations progressed with lightning speed bypassing the enemy, windows of opportunity exploited, and Dhaka placed in the cross hairs.

“Battles are won by slaughter” and manoeuvre. The greater the general, the more he contributes in manoeuvre, the less he demands in slaughter – Winston Churchill

Helicopters were used extensively and innovatively by 4 Corps to helilift troops across many rivers in the Eastern Sector. This added speed to the operations and imbalanced the defenders; rapid manoeuvre added tempo and momentum to the race for Dhaka.

A boldly executed paradrop at Tangail on 11 Dec caused shock and awe amongst the enemy. This sensational vertical envelopment would set the climax for the capture of Dhaka. 2nd Battalion, the PARACHUTE Regiment was ordered to capture the Poongli Bridge on road Jamalpur-Tangail-Dhaka intact. The objective was to cut off 93 Pak Brigade, retreating from the north to defend Dhaka and its approaches. The Tangail Airdrop involved AN-12, C-119s, Caribous and Dakotas from 11 and 48 Sqns of the IAF. The drop was dispersed over a large area due to heavy winds, but 2 PARA regrouped quickly and attacked Poongli Bridge and Ferry site and captured it after a brief fight. The enemy in the area was decimated by the joint effort of the IAF,  the Indian Army and the  Mukti Bahini.  By the evening  of 12 Dec, the Pak 93 Brigade had ceased to exist.

BBC misreported that 5,000 paratroopers (instead of 700) were para-dropped at Tangail causing a scare among the Pakistanis (this was the only source of information of the beleaguered force). The Para drop unnerved the East Pakistan Army Commander Lt General AAK Niazi which led to the surrender of his forces earlier than contemplated.

The Indian Navy also came out with flying colours. Itshard hitting achievements in the Bay of Bengal contributed significantly to the victory and liberation of East Pakistan. INS Vikrant was dispatched to East Pakistan and starting 4 Dec, launched air strikes along the coast using Seahawks by day and Alizes by night. On the very first day, Chittagong harbour, the outer anchorage, airfield, and airstrip at Cox’s Bazar suffered considerable damage. On 5 and 6 Dec further damage was inflicted upon Chittagong, Khulna, and Mangla harbours, and ships in the Pussur River. The Carrier Task Force had enforced a total blockade within 48 hours. These strikes continued unabated and largely unchallenged ruling out possibility of reinforcements from the West in the beginning of the war, and evacuation of troops later.