Sub Title : Chinese initiatives to build a maritime infrastructure must be seen from a strategic perspective 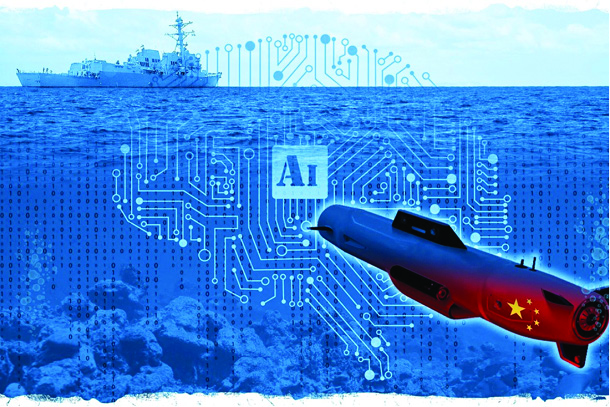 Chinese initiatives to build a maritime infrastructure across the Indian Ocean littoral and  to explore the ocean bed are ostensibly for potential exploitation of precious and previously untapped resources. However, like many other Chinese projects such as the mega Belt Road Initiative, these must be seen from a strategic perspective. Chinese will increase their presence in the area and be able to carry out under water surveillance particularly of submarines of the US, Japan and Korea that are deployed to monitor Chinese naval activity

China’s quest to dominate the underwater domain is being spearheaded by the national leadership; President Xi Jinping has dared Chinese scientists – “There is no road in the deep sea, we do not need to chase (after other countries) we are the road.” This did cause excitement among the scientists, but they were cautious and one of them has observed “It is as challenging as building a colony on another planet for robotic residents with artificial intelligence…more difficult than building a space station. No other country has done this before” and would require a revolutionary technology that “can change the world”.

China plans to set up a V-shape underwater colony in the Manila Trench at a depth of about 6,000 to 11,000 meters. The project is estimated to cost nearly US$160 million but given the ‘intricate and unprecedented nature of the proposed underwater base, the final cost is expected to be several times higher’.

Although the Chinese have indicated that the primary purpose of the project is to ‘survey, study and record life forms on the ocean seabed, setting the stage for potential exploitation of precious and previously untapped resources that could have medicinal and technological benefits’, the project, like many other Chinese projects such as the mega Belt Road Initiative, must be seen from a strategic perspective. It is fair to assume that it has

dual-use applications and the facility, when fully operational, would be able to undertake underwater surveillance particularly of submarines of the US, Japan and Korea that are deployed to monitor Chinese naval activity.

This assumption is further reinforced by the fact that in an interview in July 2018 Lin Yang, the director of the Shenyang Institute of Automation in Shenyang noted that China plans to develop new-generation military underwater robots by 2021 to coincide with the 100-year anniversary of the Chinese Communist Party in 2021.

The goal of 912 Project is to develop new-generation military underwater robots particularly AI-driven unmanned submarines to handle surveillance, mine laying, and attack missions.

Likewise, Luo Yuesheng, professor at the College of Automation in Harbin Engineering University, a major development centre for China’s new submarines, contends that “AI subs would put the human captains of other vessels under enormous pressure in battle… It is not just that the AI subs are fearless, but that they could learn from the sinking of other AI vessels and adjust their strategy continuously. An unmanned submarine trained to be familiar to specific water “will be a formidable opponent”

In fact, there is a race on between the US and China to develop extra-large unmanned underwater vehicles, or XLUUVs. The US is focusing on the Lockheed Martin’s Orca system and the  company statement notes that a “critical benefit of Orca is that Navy personnel launch, recover, operate, and communicate with the vehicle from a home base and are never placed in harm’s way,” Boeing too is developing a prototype based on its Echo Voyager; this 50-ton autonomous submarine (more than 15 meters long and 2.6 meters in diameter) ‘can operate for months over a range of 12,000 kilometers, more than enough to sail from San Francisco to Shanghai’. It has a maximum speed of 15 kilometers per hour, can dive to 3 kilometers and carry up to 8 tons cargo. Russia too is reported to be developing a ‘large underwater drone capable of carrying  a nuclear weapon. The Status-6 autonomous torpedo could cruise across large distances between continents at high speeds and deliver a 100-megaton warhead, according to news accounts’.

While the above Chinese interest in the underwater domain is for strategic purposes, a lesser known fact is that China is pursuing explorations of the seabed for polymetallic nodules known to contain nickel, copper, cobalt and manganese. It has made enormous technological investments and has expanded its mining area to 86,000 square kilometers in the last six years. According to the International Seabed Authority (ISA), China is all set to lead and be the first country in the world to commence mining seabed for minerals after international rules for exploitation are approved in 2020.

In the 1970s, China actively engaged in the formulation of the international seabed resource exploitation regime under the UN but was constrained to explore the seabed due to lack of technology as also the ongoing Cultural Revolution (1966-76). But a decade later, Chinese research vessels were undertaking voyages to survey the seabed. In 1991 China registered with the UN as a Pioneer Investor of deep-seabed exploitation and the ISA granted 300,000 square kilometers in the Clarion–Clipperton area in the Pacific Ocean. It set up the China Ocean Mineral Resources R&D Association (COMRA), the national agency for deep seabed exploration, and enacted China’s Law on Exploration for and Exploitation of Resources in the Deep Seabed Area in 2016.

Today, China boasts of significant breakthroughs in state-of-the-art underwater technology for seabed exploration and processing. Perhaps what is noteworthy is that Chinese scientific research vessels are frequently deployed across the oceans and five to six voyages are planned annually to the Pacific, Atlantic and Indian Oceans. The secretary general of the COMRA has however conceded that China still has a number of technological gaps ‘due to our comparatively weak industrial foundation as a developing country’; but there are plans ‘to conduct underwater exploitation tests at depths of 1,000 meters next year’.

China’s engagements with the ISA are noteworthy; it has made several proactive suggestions to the Agency including capacity building programmes for island states and developing countries. In 2000 it proposed a “natural viability baseline study” in its contract area to monitor impact of long-term human interference on marine ecology. Similarly, it offered to establish a Regional Environmental Management Plan (REMP) for western Pacific Ocean which also includes Russia, Japan and South Korea who have seabed exploration claims. These countries pursue independent underwater exploration activities for cobalt crust found on seamounts, but do not share data on marine ecological conditions of the area. On a suggestion by China, the ISA endorsed a proposal to share ecological data among the four countries to enable development of ecological conservation plans before commercial seabed mining starts in that area. China hosted a workshop on REMP in Qingdao to “assess regional characteristics and environmental needs” as also foster mutual trust. It even invited scientists and specialists from these countries to join its 56th scientific voyage for the proposed REMP area. China has also offered access to mineral samples collected during the previous scientific expeditions for academic study and research at the China Ocean Sample Repository in Qingdao.

The ISA Assembly, the regulating body for seabed mining activities including granting  exploration contracts for industrial-level mining, has approved setting up of a training centre under the Chinese Ministry of Natural Resources for a capacity building program. This will enable training opportunities for specialists from developing countries including small island states to study and understand the regulations relating to prospecting, exploration and exploitation of the seabed as also help setting up REMPs.

Cooperation and Contestation on the Indian Ocean Basin

India was given Pioneer Investor status in August 1987 and allocated 150,000 square kilometers in the Central Indian Ocean Basin for developmental activities for polymetallic nodules. It is exploring 75,000 square kilometers area on the seabed at 4000 to 6000 m water depth in the Central Indian Ocean Basin (CIOB) and located about 2000 km away from her southern tip. It is developing technologies for mining the wealth and a three-member crew submersible vehicle for ocean missions which will be capable of diving up to 6,000 meters is under development. The indigenously developed water/polar remotely operated vehicle (PROVe) has already been tested at depths of 500 meters in the Andaman coral Islands and ‘the vehicle was successfully maneuvered in the undulating reef terrain to record high quality underwater visuals of coral reef biodiversity with spectral irradiance’. The 15-year MoU with the ISA in 2016 gives India exclusive rights to exploration and development of technologies for eventual extraction of Polymetallic nodules (PMN).

In 2011, China was allotted an exploration area of 10,000 square kilometers in the Indian Ocean for 15 years. In 2018, Chinese research vessel Xiangyanghong-10 spent 250 days in the Indian Ocean, and Qianlong-2, an unmanned submersible, operated for 257 hours in nine separate underwater missions covering 654 kilometers. It found polymetallic sulfide deposits on the seabed of western Indian Ocean. China has now proposed “a U-Loop REMP among four regional contractors, China, India, Germany and South Korea”. It has announced plans to host a workshop on developing a REMP for the Indian Ocean in late 2020.

Over the last three decades, the frequency and purpose of Chinese naval forays in the Indian Ocean has transformed. What began as goodwill and training visits in the 1980s is now deployment of large number of ships including nuclear and conventional submarines in the Indian Ocean. Annually two deployments (conventional submarine followed by a SSN (nuclear powered attack submarine) of three months duration have been observed. According to Indian Navy sources, China now plans to deploy an aircraft carrier in the Indian Ocean. Besides, China has access arrangements in Djibouti, Gwadar in Pakistan and Hambantota in Sri Lanka. These developments are of concern to the Indian Navy and China’s offer to hold a REMP would be viewed with enormous skepticism.