Sub Title : Threats in the maritime domain, which could have serious socio- economic consequences 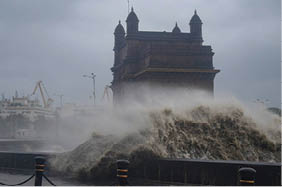 Climate change is  globally recognised as a major cause of concern as it brings in its wake many a risk. The article examines the threats in the maritime domain, which could have serious socio- economic consequences. It also suggests the way forward for mitigation of these from using existing institutional mechanisms to enhancing the resilience of both physical and social infrastructure

The scientific consensus built over the past few decades unequivocally states that climate change is real, and it is occurring at an accelerating rate.  It is being caused primarily by human activities, and we are already experiencing its impact all across the planet.

Following a relentlessly rising trend, the global average temperature in 2020 was recorded at about 1.2° C above the pre-industrial period, taken as the 1850-1900 average, primarily due to the increasing concentration of greenhouse gases in the atmosphere.  Even though this may seem like a small number, at the planetary scale this temperature rise corresponds to an incredible amount of energy that has been absorbed by the land, ocean, and the atmosphere.  From the growing number of extreme heat days to more erratic rainfall patterns to more intense tropical storms to melting glaciers and polar ice resulting in sea level rise, the signs of our changing climate are ubiquitous.

The traditionally calm Arabian Sea witnessed four major cyclones in a row in the last four years.  Cyclone Tauktae in May of this year made landfall in the state of Gujarat as an Extremely Severe Cyclonic Storm with sustained wind speed of over 180 km/h.  While Gujarat was hit the worst, Tauktae caused significant damage, estimated at over Rs 15,000 crore to the states of Kerala, Karnataka, Goa, and Maharashtra as well.  Over 169 Indians lost their lives due to the cyclone, making Tauktae one of the deadliest cyclones to have originated from the Arabian Sea.

Originating in the Bay of Bengal, Cyclone Amphan, in 2020, caused major damage, estimated at over Rs 1.02 lakh crore, because of loss of residential, commercial, and municipal infrastructure in the state of West Bengal alone.  Soon after that, in June 2020, the west coast of India witnessed cyclone Nisarga, its strongest tropical cyclone since 1981.

The rising trend of powerful cyclones in the Indian Ocean is a direct consequence of the rising sea surface temperature which is providing favourable conditions for the rapid intensification of cyclonic storms.  Of course, this trend will continue to get worse unless drastic measures are taken to mitigate global carbon emissions and arrest ocean warming.

The warming of the Indian Ocean is also the leading contributing factor to sea level rise (SLR) in the region due to thermal expansion of the water in addition to other sources of sea level rise such as the melting of mountain glaciers and the polar ice caps in Greenland and Antarctica.  The Indian Ocean, the Bay of Bengal in particular, is experiencing a much faster rate of sea level rise than the global average.

SLR is practically irreversible through natural processes on timescales of hundreds of thousands of years. Moreover, the latest science suggests that there are a number of ‘tipping points’ in the cryosphere which, when crossed, would commit us to multiple meters of global SLR over a period of decades to centuries to millennia and there is no certain way to determine where these tipping points lie in terms of the level of global warming. In the 2021, Working Group I contribution to the Sixth Assessment Report, entitled “Climate Change 2021: The Physical Science Basis”, the United Nations’ (UN) Intergovernmental Panel on Climate Change (IPCC) projected that the global mean sea level (GMSL) rise could be in the range of 0.63–1.01 m by 2100, relative to 1995-2014 levels, if no mitigation action is taken (scenario referred to as ‘Shared Socio-Economic Pathway 5-8.5’ or SSP5-8.5), derived from climate models-based projections.  In the most optimistic scenario where all nations take immediate and drastic measures to slash down global greenhouse gas emissions (referred to as RCP2.6), the potential sea-level rise could be brought down to around 0.28-0.55 m, relative to 1995-2014 levels.

Every fraction of a metre of rise in sea level, compounded by the increase in probability of extreme sea-level events, such as high tides, storm surges, and cyclones, poses a direct threat to the critical infrastructure and the population of all the littoral states in the Indian Ocean Region (IOR).  While it is true that most of the major changes in sea level have historically occurred over timescales of several centuries to millennia, there are also recorded instances of naturally occurring rapid changes in sea level in our planet’s history.  Considering the exponentially accelerating rate of climatic change that we are experiencing now we must not discount the possibility of abrupt changes in sea level which would of course have major repercussions for all coastal nations in the IOR and the world.  This was also acknowledged in the 2021 IPCC report which stated, “global mean sea level rise above the likely range – approaching 2 m by 2100 and 5 m by 2150 … cannot be ruled out due to deep uncertainty in ice sheet processes.”

Rising ocean temperature is also causing a series of knock-on physical, chemical, and biological changes in the ocean.  We know that the ability of the ocean to store dissolved oxygen decreases with increasing temperature, this is being actively observed in the expansion of the dead zones in the ocean.  In this context, tropical regions including the Indian Ocean are particularly susceptible to low-oxygen conditions compared to higher latitudes.  As the name ‘dead zone’ suggests, these areas of the ocean are devoid of complex marine life because of the extremely low dissolved oxygen content.

Most marine species, all the way from the microscopic plankton to the apex predators, are highly sensitive to temperature changes.  In recent decades, scientists have recorded many physiological, behavioural and distributional changes in fish populations as a response to rising temperatures.  The changing geographical distribution of fish is having and will continue to have significant impact on the fisheries sector and the local fisherfolk communities.  Taken together with other human stressors like overfishing, IUU fishing, industrial effluent pollution, and plastic pollution, these changes spell peril for marine life.

Climate change is already causing major socio-economic disruptions to all nations worldwide.  However, as one would expect, the magnitude of the impact varies widely across countries due to their widely different national circumstances.  Developing and least developed nations in the region are the most vulnerable and experiencing the worst impact mainly due to their limited financial and technological capacity to manage and adapt to the rapidly changing conditions.  The same countries have also contributed the least to causing the problem as evidenced by their marginal cumulative carbon emissions through recent decades.

The Small Island Developing States in the IOR are at the frontlines of climate change.  Several impacts of climate change such as extreme heat and droughts, intensifying cyclonic storms, and sea level rise, in particular, pose an imminent existential threat to these nations.  Most of the SIDS in the region fall under the low-income category, in fact, a large part of their national GDP comes from international tourism which would be adversely affected by the impact of climate change including loss of marine biodiversity and frequent bouts of extreme weather events.  Due to limited economic resources these nations do not have the capacity to deal with these impacts and, therefore, rely on the regional powers for support.

Growing food and water scarcity as a consequence of the complex web of climate change impact  is emerging as perhaps the most dangerous destabilizing factor in the region.  The arid regions in West Asia and North Africa are getting progressively drier due to climate change, which is converting once fertile lands into deserts.  According to some estimates, desertification in Africa is occurring at a rate of as much as 20,000 hectares per year.  This is contributing to further destabilisation of the already turbulent region and creating opportunities for malevolent actors to take advantage and infiltrate and expand their operations.

It should surprise no one that these long-term impacts of climate change are forcing and will continue to force many people to leave their native homes and move to more hospitable regions or in search of better opportunities.  This is, of course, not a new phenomenon.  Throughout history, all species including humans have at some point or the other, undergone displacement due to environmental changes.  However, the expected scale of migration in the coming decades due to climate change will likely be unparalleled in human history.

We are seeing both internal and external migration, that is, from one area to another within a country and across international boundaries from one country to another.  It is not always straightforward to unambiguously identify a certain displacement of a group of people to have been caused by climate change because climate change often acts as the last straw by exacerbating existing problems to a tipping point.  Moreover, there is no globally recognised definition of climate refugees or climate migration yet, which makes it harder to put in place appropriate response mechanisms.  Climate-change-induced internal and external migration is already happening in almost all parts of the world, albeit at different scales.  Since this issue cuts through international boundaries, it can only be addressed through proactive and concerted efforts at the regional and global levels, otherwise it may transform into the one of the greatest humanitarian crises of our generation.

There is a need to utilise the existing regional and sub-regional frameworks such as the Indo-Pacific Oceans Initiative, the QUAD security dialogue, the Indian Ocean Rim Association, the Indian Ocean Naval Symposium, the Indian Ocean Commission, BIMSTEC and ASEAN, and prioritise climate change mitigation and adaptation as the action points.  Several of these frameworks already include an environment or ecology component, however, necessary urgency and emphasis is completely lacking at the moment.  Moreover, the inter-relations between the environment and climate change components and the other facets of cooperation such as maritime trade and connectivity, security, technology and innovation, etc. need to be appreciated and addressed in these forums.

Enhancing the resilience of critical infrastructure, both physical and social infrastructure, against the adverse impacts of climate change must take priority to minimise the expected socio-economic losses in the near future.  Retrofitting, relocating, and redesigning our infrastructure would be a herculean task which would take several years to decades. Therefore, we must start preparing now, in order to be ready for the storms of the future. It is important that we adopt a dynamic approach and account for the low-probability but high-risk scenarios of abrupt changes. In this context, the major powers in the region must support the most vulnerable and least equipped nations through capacity building and capability enhancement.

Of course, mitigation is the best form of adaptation.  Rapid and significant cuts in global carbon emissions must take top priority in order to avoid some of the worst-case scenarios. The findings of the most recent Sixth Assessment Report of the United Nations’ Intergovernmental Panel on Climate Change indicate that we may have already missed our chance to limit global warming below 2 degrees Celsius. This conclusion should not become the cause for inaction and defeat, rather it should serve as a wake-up call that we are entering into dangerous territory. The international community must work together to prevent every fraction of a degree of future warming because the impact scales exponentially with every degree of warming.

Clearly, climate change poses significant threats to the maritime domain, however, pursuing a sustainable, regional Blue Economy offers a promising way to mitigate climate change and climate-proof the maritime sector while simultaneously generate a myriad of opportunities for economic growth.

South-East Asia in particular. Ocean based renewable energy is already being utilised very efficiently by many countries in Europe, which implies that there are opportunities to learn from our neighbours in the region and simultaneously strengthen our geopolitical relations.