Sub Title : On the occasion of the Army Day the COAS gives his views on various issues 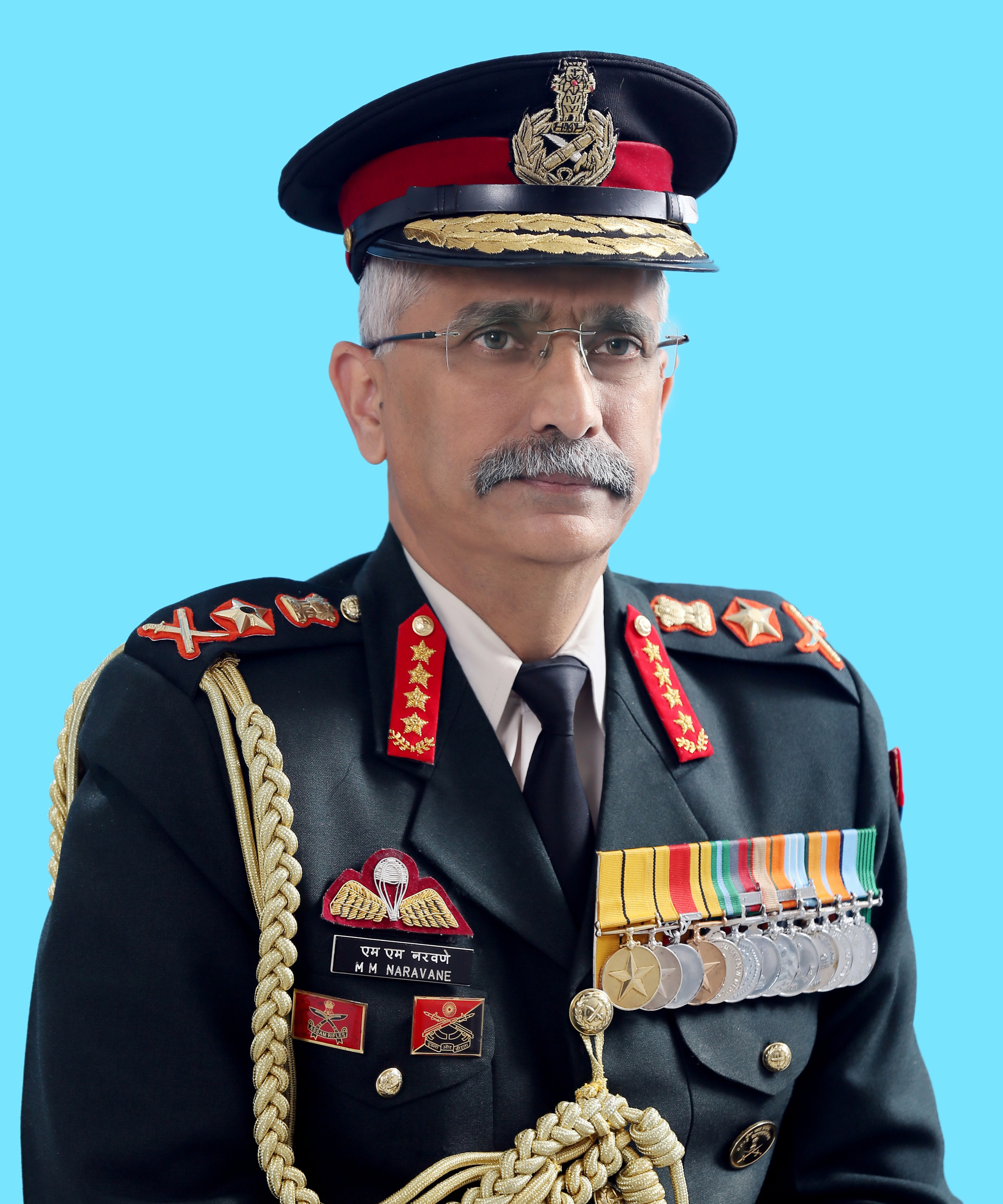 General Manoj Mukund Naravane, PVSM, AVSM, SM, VSM, ADC is an alumnus of National Defence Academy, Pune and Indian Military Academy, Dehradun, General Naravane was commissioned into 7th battalion The Sikh Light Infantry in June 1980. In a distinguished military career spanning almost four decades, Gen Naravane has the distinction of holding key appointments in active Counter Insurgency environments, both in the North East and in Jammu and Kashmir. He was part of the Indian Peace Keeping Force in Sri Lanka during Operation PAWAN and also served as a Defence Attache at the Indian Embassy in Myanmar for three years. He commanded a Rashtriya Rifles Battalion in J&K and an Infantry Brigade in the Eastern Sector. He went on to command IGAR (North), a prestigious Strike Corps in the Western front as well as the Delhi Area. Prior to being appointed as the VCOAS in Sep 2019, he was General Officer Commandingin-Chief of Eastern Command and Army Training Command. Gen Naravane took over as the 28th COAS of the Indian Army on 31 Dec 2019.

DEFSTRAT. There have been enthusiastic debates and dialogues over creation of theatre commands combining the three services to ensure improved jointness and coordination amongst the three armed forces. But equally important are the Cyber and Space domains, without which none of the services can be optimally effective. What efforts are being made by the Army to integrate these resources?

COAS. The modern day battlefield will witness the increased application of futuristic technologies and exploitation in domains such as cyber, electromagnetic spectrum and space. Militarisation of space, currently a taboo, is however a real possibility since we have already witnessed the operationalisation of kinetic capabilities of China in the space domain. Other countries will follow suit.

♦ India recognises the challenges of space militarisation and has started taking adequate defensive measures to ensure that our communication, weather and remote sensing satellites are not held hostage to adversarial intentions. Concurrent efforts are being undertaken to enhance the Army’s cyber resilience to prevent the exploitation of cyber assets by adversaries.

♦ A space research agency was created under the DRDO in addition to the Military Defence Space Agency to develop military capabilities in space. Work is in progress to provide enhanced Signal Intelligence (SIGINT), Communication Intelligence (COMINT) and Electronic Intelligence (ELINT) capabilities of the defence forces.

DEFSTRAT. The three Services, in particular the Indian Army, are feeling the impact of cultural changes in society. The surge in the number of women officers, entry of young officer cadets from different strata of society, and the impact of the Internet of Things (IoT), Social Media etc are beginning to change the traditional method of operations, during peace and war. How is the Indian Army preparing to deal with the impact of such changes?

COAS. The recruitment process in the Indian Army, for officers and men, is being evolved in a manner that provides a dynamic yet resilient template for inducting personnel of requisite standards and professionalism. We are aware that what is being attempted is something novel, especially when it comes to inducting women cadets in NDA or recruiting women soldiers, but history is witness that the Indian Army has never shied away from any challenge.

♦ The Indian Army, as an organisation, is gender-neutral and proactively provides fair opportunities to all officers and men, irrespective of gender, class or caste, to optimise their potential in the service of the Nation, in the process furthering their own personal growth.

♦ Social media and other technologies are the products of the current milieu as were previous technologies like colour television, radio and walkmans. Each technology brings with it challenges and opportunities and it is upon us to focus on harnessing the opportunities provided by these technologies. Yes, social media usage has its own challenges in terms of proliferation of fake news, honey traps etc but we have adequate safeguards in place and more importantly, our new generation is much more IT literate and aware of the pitfalls.

♦ The upcoming technologies & their possible military applications are being constantly analysed for relevance in the Indian context. Gainful infusion and absorption of these emerging technologies, in consonance with the Indian Army’s operational requirements, are regularly being dovetailed in our Capability Development Plans.

DEFSTRAT. Obsolescence management and induction of new technologies within a budget-constrained environment is a difficult task. Yet it is a reality, particularly with new technologies emerging at a rapid pace. How does the Indian Army plan to deal with the dichotomous situation?

COAS. Militaries across the globe walk a tightrope between managing equipment that is on the verge of being obsolete and induction of new-age equipment, either to replace existing ones or offsetting a particularly serious capability of the adversary. We also find ourselves in the same situation.

♦ However, in order to be fiscally prudent while inducting new technologies, we have decided to handhold our indigenous defence manufacturers, at the same time insisting our foreign partners to maximise Indian content in their platforms and base their industries in India. This strategy is slowly starting to show results.

♦ There are numerous Design & Development projects being progressed with DRDO at various stages of development. Some of these are high technology equipment which would enhance the capabilities of the IA.

♦ Towards this end, we have established the Indian Army Technological Hubs (IATH) at Bengaluru, Pune and Hyderabad; three innovation hubs of India. Through these hubs we are reaching out to Industries, Academia, Unicorns and Startups. Regular interaction and symposiums are organised to facilitate interaction and exchange of ideas. We are also looking at solving functional problems being faced by industries in achieving seamless integration with the Indian Army.

DEFSTRAT. Disruptive technologies often get more attention when in actual fact it is the disruptive concept in warfare which throws the adversary off-balance. Ideally, a combination of the two would work best. How does the Indian army evolve doctrinal changes to keep pace with warfighting and technologies? How are the rank and file being trained and kept abreast with the changes?

COAS. The advent of numerous disruptive technologies is revolutionising the nature of warfare. The same has been witnessed in the ongoing Azerbaijan – Armenia conflict, as also in the clashes in Idlib, wherein the use of unmanned armed aerial systems have demonstrated long-range precision and standoff capabilities. However, it is true that new technologies must be employed in novel ways and as per novel warfighting concepts, lest their capabilities be underutilised.

♦ Gainful infusion and absorption of emerging technologies, in consonance with the Indian Army’s operational requirements are regularly being dovetailed in our Capability Development Plans.

♦ The awareness, exploitation and employment of Non – Contact Warfare vectors are also being factored in training.

♦ Special focus is devoted to training on New Generation Equipment (NGE) with a view to developing core teams, instructional material and training aggregates to ensure smooth adaption of this equipment.

♦ The technical threshold of all ranks is being enhanced to facilitate ease of technology infusion. Technical awareness of current and emerging disruptive technologies like robotics, Artificial Intelligence, Swarming, Cyber, Nanotechnology, Big Data analysis and Space applications through institutionalized interventions.

DEFSTRAT. The Indian Army is in a peculiar situation of dealing with 4th Gen warfare while preparing for 6th Gen warfare. How do you propose to manage and prepare for both the contingencies?

COAS. I feel we must stop segregating wars as per generations as this categorisation does not cater for the crossing over these so called generations into one another. Yes, we have come a long way from trench warfare and attrition based doctrines but the territorial nature of our conflict forces us to fight with a strategy that favours boots on the ground approach.

♦ Wars in the past with our adversaries and the prevailing security situation along the contested Borders, challenges the myth of ‘No Conventional War’. Chances for an all-out conventional war may have diminished but have not vanished completely.

♦ Over the past five years, the Indian Army has focused on progressively increasing our capabilities through optimisation of force levels, adoption of technology, induction of Force Multipliers, as also modernisation and improvement of infrastructure. Our troops, our organisation, our equipment, our strategy and our tactics enable us to continuously evolve to respond to the emerging threats and challenges.

♦ National security requirements continue to feed our wish list and the same is prioritised in terms of importance and urgency before the equipment or system is introduced in the Service. Modernisation priorities have been set, specific technologies or equipment identified, and procurement is now being progressed along the most optimal route.