Sub Title : Growing Chinese and US competitive manoeuvring could create fertile grounds for a Cold War. 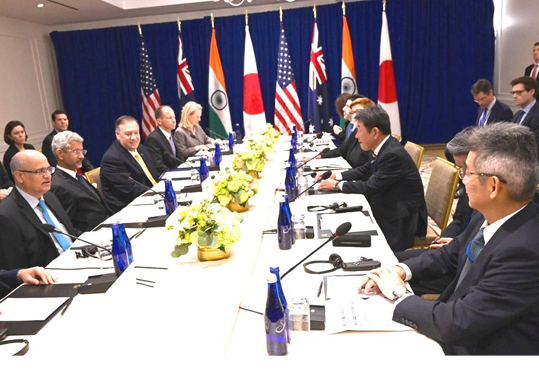 The world is poised on the brink of another cold war as the USA and China  vie for supremacy with economic, political and ideological dynamics playing out. The crisis brought in by the Covid pandemic has hastened the sounding of  the bugle. The article looks at the contours of the new cold war and the changes in the global order that will come in its wake

Analysts have been talking of the coming of the ideological, economic and political divide for years now: a divide between China and the USA which would suck in the rest of the world. It was predicted to be around 2030 or so when China attained its full economic and military potential.

In my appreciations, the Cold War 2.0 had arrived a decade sooner. In the wake of COVID -19, China has played its hand and advanced its claims in areas as far flung as Ladakh, the China Seas, Hong Kong and Taiwan. Also, the world is closing ranks against China angered by its role in creating and spreading the deadly Corona Virus. These confrontations are an inevitable consequence of the struggle of supremacy between a declining USA and fast-rising China. Their relations are frayed on issues as diverse as trade, human rights and freedom of navigation in the China Seas:

The true extent of the actions will only be seen after the US Presidential elections. But irrespective of who comes to power in Jan 2021, the US stance towards China is likely to shift from accommodation to confrontation and could intensify not just as a battle for supremacy but also as a clash of values, economies and political beliefs. That would perhaps bring together a loose coalition of ‘like-minded nations’ to help stave off the ever-increasing Chinese belligerence.

Contours of the New Cold War

The Cold War between USA and USSR lasted forty years and fortunately never erupted into full scale war. Then it was relatively easy to contain the Soviet Union, a closed totalitarian state which had little engagement with the rest of the world. China shares the same Communist ideology and is as closed and authoritarian, but unlike the USSR, it has imbedded itself completely in the economy and the technological systems of the world. It has made inroads into numerous countries through easy loans and shrewd marketing strategies. It controls institutions such as United Nations and WTO; it is economically and militarily more powerful than the Soviet Union and its Belt and Road Initiative connects a quarter of the world directly to it.

Placing barriers against China will therefore not be an easy proposition.

The First Stage Would Involve Economic and Technological De-Coupling

Both the Western and the Chinese media warn of ‘The Coming Cold War.’ Like the Cold War of before, this will divide the world into two blocs, one led by the US, the other arrayed behind China. Much of the divide will be ideological – between liberal democracies and the authoritarian Communist regime of China – but it will translate in every other place as well – economic, political and military. Most of the activities will be in the grey zone – in a zone just short of actual conflict – and actual conflict, if it does take place would be through proxies. It seems unlikely that there will be an all-out war, but the heightening tension and unpredictable nature the Chinese leadership could just precipitate regional conflicts, any of which could get out of hand and spark a global confrontation.

The Arenas and Adversaries

While the first Cold War had the democratic world arrayed against the communist regime of the Soviet Union, the new Cold War is likely to be against a Communist China supported by Russia with ancillaries such as Pakistan and Iran forming an axis. Russia and China operating in tandem could influence actions in both Europe and the Indo-Pacific.

USA is likely to lead in the coming together of nations impacted by China and its policies – India, Japan, Australia, Europe and South East Asian nations. A loose alliance will emerge and, in that India, will be a key member. The tensions between USA and the USSR were too far away to impact us directly and we could afford to be ‘non-aligned’. The Chinese ‘Global Times’ has warned India not to take sides in ‘The New Cold War,’

In my assessment, India has to make its choices, and align strongly with the USA and the ‘Coalition of Democracies’ that seems to be emerging with the Center of Gravity likely to be the Indo-Pacific. Two carrier groups of USA operate in the area and warships conduct ‘Freedom of Navigation’ exercises in the waters claimed by China. Each side is engaged in a dangerous game of ‘I Dare’. Chinese state media has recently warned US and Australia that closer cooperation between them will heighten the risk of conflict in Southeast Asia and could result in “unbearable consequences” for the democratic nations and the region.

Ladakh is another front which could transform rapidly from just a heightened state of tensions to open conflict. Irrespective of how the present stand-off pans out, Indo-China relations are likely to be adversarial and we would be competitors, economically, strategically and militarily. To cater for the increasingly adversarial relations, India will have to side up to strengthen its military and diplomatic strength.

Preparing for the Future

India has unfortunately been ringed by the rising coalition of China, Pakistan, a Taliban controlled Afghanistan and Iran – an alliance which is likely to take shape in the years to come. The way out of this encirclement is to move towards the Indo-Pacific and develop stronger allies and a greater convergence of interests there.  The US is looking for allies to match China’s growing naval clout; China with 350 vessels now has the world’s largest naval fleet. India with its complementary strategic location in the Indian Ocean Region and an experienced Ocean faring Navy is a natural ally.

Apprehensions about China have also brought back the idea of the ‘Quad’ of democratic nations – US, Japan, India, and Australia with India consequent to its favourable location emerging as an important player. Its strategic control over the Indian Ocean Region (IOR) and the clash of interests with China’s Maritime Silk Route give it even greater significance. An expanded Quad could include New Zealand, South Korea, Vietnam and later even incorporate Philippines, Malaysia, Singapore and Taiwan. The Quad could be akin to an Asian NATO and like NATO controlled Warsaw Pact nations, Quad would provide security for Asian allies. Convergence of interests through diplomatic consultation, defence cooperation, and promotion of free trade and freedom of navigation is a way of ensuring the Quad is taken ahead successfully. For India, it’s a win-win situation for its Act East policy and enhancing proximity to the emerging zone of importance for the future, without having to be directly at loggerheads with China.