Sub Title : Shape of warfare in times to come 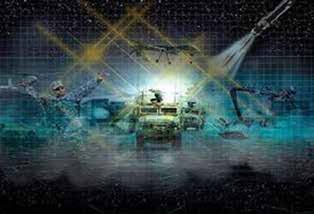 Turkey’s offensive in Syria’s Idlib was in the news sometime back. It displaced and drove away hundreds of thousands of refugees who are now knocking at the doors of Europe. And as is expected in a military conflict, it also caused a number of casualties on both the warring sides,

But what may have gone unnoticed is the type and cause of these casualties. The Syrian Air Force, allegedly backed by their Russian counterparts, took the Turks by surprise. On the night of 27/28th February, a large number of Turkish armoured vehicles were hit by air attacks launched by the Syrian Air Force and Syrian Missile systems, including by loitering munitions. Turkish army, hich had been successful initially, woke up to the new reality even as they lost 34 soldiers and a number of vehicles. A few days later, the Turkish Army responded by knocking out a large part of Syrian mechanized columns through the use of unmanned aerial vehicles and drones. With the help of multiple, intrusive sensors mounted on these UAVs, battlefield surveillance and control was such that there was no place for the Syrian mechanized  columns to hide. Conventional passive protective measures were useless against the lethal ‘top and side’ attacks, targeting the vulnerable soft spots of armoured vehicles. A combination of Turkish Bayraktar UAVs and MAM precision munitions picked out and hit the targets and destroyed them with minimum fuss.

Are there any lessons to be learnt from such skirmishes? Yes and no.

It is a mistake to apply templates in military operations, as situations and factors vary greatly. Priciples of war, however, are of a more abiding nature. Surprise and deception, efficacious employment of resources and operational tactics will ever continue to remain important.

But, in wars to come, of even greater import will be the employment of technology!

Localised battles and skirmishes serve as test beds for new technologies and good or bad battle drills. Conclusions that are so thrown up, merit serious evaluation. In the case of Idlib in Northern Syria, the local commanders may not have applied the art of camouflage and concealment as they failed to appreciate the strength and capabilities of electronic sensors and precision munitions employed by the enemy. They may even have bunched up the assets as the terrain may not have allowed dispersion. And of course, it is likely that the sheer thickness of steel of their vehicles made them complacent.

What is certain though is, that unlike yesteryears, in today’s tech-intensive battlefield, mere thickness of armour can no longer protect you. ISR and sensors have come to play a dominant role, and their increasing density casts a shadow on the conventional ways of warfighting. Backed by precision munitions, and the impending boom of AI and quantum computing, conventional forces need a lot more to counter the new threats. Multispectral camouflage can be negated by smart sensors, movement can be detected through electromagnetic spectrum, thick steel can be pierced, precision munitions can surgically remove selected targets and so on.

Unmanned and autonomous platforms add a completely new dimension, distancing the human from the battlefied. Information manoeuvre warfare, EM Spectrum, cyber and space are some of the other domains which will dictate how state vs state or state vs non-state conflicts pan out in the future.

Given the modern battlefield, which is increasingly witnessing technology substituting for human soldiers, today’s infantry faces a peculiar dilemma. When they are unprotected, out in the open, they are vulnerable to a variety of projectiles, shrapnel and blast effect. Protected shelters and fortifications on the other hand render them vulnerable as they make lucrative targets by way of big numbers. When a large body of troops has to move either in ‘advance to an objective’, ‘follow on support’ role or a simple switch to another sector, the threat of discovery from modern technologies gets enhanced. Move on foot or in soft-skinned vehicles is like presenting a target to the enemy on a platter who possesses an increasing capability to detect, engage and destroy. The answer therefore may lie in rapid and protected mobility within the theatre of war. Surprise and speed are essential to avoid or delay detection while using faster, lighter and well-protected platforms for movement. Not only will it provide physical protection, it will also reduce fatigue. Strategic mobility that comes with such troop carriers is an added advantage.

Staying with the theme of the modern day battlefield, exponential increase in sensors and their increasing network through C2 has also illuminated the battlefield in an unprecedented manner. Camouflage and concealment may remain hallmarks of good battle drills and training, and even prove to be the key to survival. But technology is catching up and, more often than not, it is now getting the better of good old soldierly skills and standard methods. Hiding man and machine’s signatures is nearly impossible with an array of sensors aimed at the area of ops from a number platforms, which range from satellites to nano drones. It is therefore, not just the mechanized forces or armoured vehicles that are visible, but every man and piece of hardware is discernible and identifiable. AI can be exploited to determine IFF (Friend or Foe). AI can also be used to prioritise the targets. Human interface is needed only to insert the protocol — factors, priorities and rules of engagement, if any.

After identification comes neutralising or destroying the target. Just like the sensors, numerous choices are available in selecting the appropriate firing platform or the projectile. From hypersonic and loitering munitions to missiles, direct firing weapons and precision munitions, the options are manifold. They are networked too. Using a C8 network (C4ISR is legacy) on a 5/6 G medium, the OODA loop is extremely brief. And that’s bad news for the target!

But isn’t that what networked battlefields are all about?

Isn’t that an old story? Again, the answer is Yes and No.

It is indeed a networked battlefield still. It is also still about picking up and selecting targets, followed by a hit, direct or indirect. However, the difference lies in the number and type of sensors to illuminate the battlefield, the speed and comlexity of computing algorithms for analysis and the fierce lethality of the weapon systems. Combine this with the availability of a range of precision munitions, and there is little room for a target to escape.

The game changer thus is technology!

In tactical terms, a typical ‘force on force’ battle is a relic of the past. With a much larger canvas visible to the warring military commanders, manoeuvers, and to an extent intentions of the maneuvering force, will become apparent to the opposite side through the use of technology. Inter and intra theater switching of forces will also reveal operational aim of the exercise. It is not only land forces who will bear the brunt of high technology, moves on high seas and in air space are as vulnerable. Below the surface of the ocean and high up in stratosphere, the platforms may be relatively better concealed and perhaps, safer, but they are no longer invisible.

What then are the operational choices?

The first one is to confront the adversary with overwhelming superiority – both in terms of technology and in numbers. Surprisingly, even though technology will slowly and expansively entrench itself in the modern battlefield, it will still leave enough room for low-tech, manpower-intensive conflict zones at the bottom of the warfare pyramid. Numerical strength of the soldiers will remain an important parameter even in future ‘contactskirmishes’, wherein some tactical battles will witness high speed moves to concentrate forces at the place and time of decision, minimum/zero distance fighting and dispersion soon afterwards. Continued presence of troops and platforms will be needed only in case of physical occupation.

Technology differential between two warring sides will also help establish superiority in the electromagnetic domain. ‘EM Spectrum Superiority’, quite akin to ‘Air Superiority’, will become the buzz word implying that a technologically more advanced force will render the adversary’s sensors and/or networks useless, or degrade their effectiveness, while keeping its own networks safe and operational. Sophisticated, complex and multi-layered networks are expected to evolve from this concept of warfare.

Stealth technologies will help in concealing small forces and avoid presenting clear targets to the enemy. This is akin to presenting a broadside two decades ago. The principle is applicable to platforms as much as to concentration of forces. Modern technology must be used to make platforms more agile and more stealthy to reduce their electronic signature. Sensor-platform fusion will also be an important element, but technology will offer several choices to the user to make the combination both contemporary and lethal, while ensuring its survivability in deadly environments.

In today’s battlefields, from the moment the forces are mobilised, they are under close and accurate surveillance and scrutiny. Sataellites, AWACS, UAVs and long range radars, to name a few, are some of the resources used to maintain a close vigil. Large forces, therefore, will remain vulnerable to easy detection and attack. Both technology and tactics will have to be employed to alleviate this problem. On the other hand, troop and platform concentrations can easily reveal possible courses of action and intentions. Tactical plans consisting of Main, Subsidiary, and Diversionary thrusts, therefore, are an obsolete concept, a relic of the past. Military commanders may use such scenarios for the purpose of training but a real-time plan of this nature really belongs to the 20th century. Gulf war was perhaps the last time it got effectively used, that too against a technologically inferior, hapless and isolated enemy.

We cannot fight tomorrow’s wars with yesterday’s strategies and tactics. Today’s technologies have already broken that continnum. And as technological revolution continues, the ‘Art of War’ in the 21st century is set to acquire a different connotation altogether. It will involve synchronicity and fluidity in operations and a highly flexible operational mindset. Future military commanders have to be tech-savvy to be able to understand and exploit technology. They have to outwit the adversary in thought and mind through clever use of technology and application of tactics.

For now at least, kinetic warfare will retain its place in the matrix of conflict resolution. But, within that, application of force and its methods have to adapt to new realities, primarily driven by new technologies. Information warfare, increasing situational awareness and access to information too will play a major role in determining the way we fight. In other changes, shock action may cede prominence to precision, numerical superiority to swarms and fire assaults to EMP. And all this in the backdrop of CBRN, which is not discussed here. Sufficient to say, CBRN threat will ensure that hostilities are kept below a certain threshold. Till then, it is kinetic means and warfare, applied through new (increasingly unmanned) platforms and imaginative tactics in the electromagnetic backdrop.

“Future wars will be short, intense and lethal” is an often heard introductory remark in military presentations and lectures. That may be so, but equally, Future wars will be ‘multi-dimensional, unpredictable and perhaps, unrecognizable!’

We need to prepare for those differently shaped battle contours!