Contours-IV :Land systems of the future

Sub Title : A part of our series on futuristic land systems 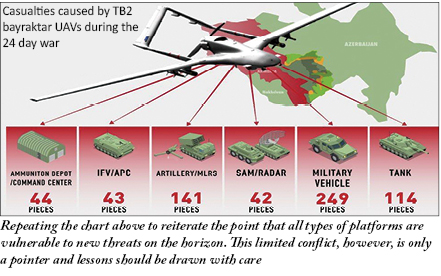 History is replete with ruined reputations of generals and strategists who attempted to predict how the next war would play out. However, if we are not to fall into the trap of preparing to fight the last war this exercise is inescapable.

In most of our crystal ball gazing, we focus on technology as the main disruptor in shaping the character of warfare. We can envisage a future battlefield dominated by armed and autonomous vehicles and robots under a cloud of swarms of drones carrying out precision attacks. Cyber-attacks will disrupt military communication networks, cripple power stations, hamper transportation and paralyse the digital administrative system. Hypersonic missiles will render air defence systems obsolete and leave our cities and their people vulnerable to surprise attacks. All this is well within the realm of possibility.

Kinetic actions will be complemented by Information wars. Whichever side controls the narrative will tip the scales in its favour. Today, the social media stands weaponised, echo chambers have been created, and filter bubbles isolate us from alternative viewpoints. In these conditions, large sections of the population can be swayed towards a false narrative. Reverses on the battlefield thus can be easily exploited by the adversary to demoralise an entire nation and break its will to fight. Recent events in the subcontinent and the Armenia-Azerbaijan conflict stand out as good examples. Standing armies thus need to keep pace with evolving technologies.

Contours I. Electromagnetic spectrum is the fourth dimension in future wars will be fought

Contours V.  Innovation in tactics and strategy for war

Watch this space for more

Before discussing technologies for land systems, it would be relevant to note that linearity of defences has been rendered meaningless by technology, even though there is no substitute to occupation of defences as per a conventional design of battle as of now. In the past, there were neatly divided frontlines where soldiers fought in attacking each other’s defences. Victory was defined by soldiers capturing territory after overcoming the enemy in successive phases. But this is set to change.

Long-range ballistic missiles targeting strategic installations in the heartland of the country could be the opening salvo of war. Cyber attacks would disrupt the regulated routine of people far away from the battlefield. So far technology has succeeded in bringing battlefield actions to the drawing rooms but now it will also have a negative impact. Unmanned, loitering and precision munitions will cause massive disruptions, casualties and chaos. Electromagnetic spectrum will witness maximum traffic and exploitation.

In the backdrop of such a technological revolution, let us take a look at technologies for some of the illustrative platforms and systems which are land based. In subsequent editions we will discuss aerial and maritime platforms.

Most of the battle tanks currently in use are in the weight category of 50 to 60 plus tons with 120/125 mm direct firing guns. They are equipped with night vision sights for all weather performance and are powered by 1000 to 1500 bhp engines. They roar as they move, they thunder as they fire and often there is a cloud of dust and sand as an armoured column makes its way through the battlefield. This effect generates shock and awe in the enemy ranks as awesome firepower of a tank is extremely destructive at the target end. Till now the only force to stop them in their tracks was the adversary’s armour.

But most of this is set to change

The very attributes that hitherto made a tank almost invincible also carry a large unmistakable signature; the thick armour that protects the tank has certain soft spots which modern munitions can strike at, and the flexibility offered by cross country manoeuver no longer surprises the enemy as prolific surveillance means have emerged which can constantly trace, track and monitor movement.

Does that imply that days of armour and armoured vehicles are limited?

Battlefield transparency has increased vulnerability quotient of all types of platforms, not only the tanks. Be it ICVs, artillery guns or combat engineers’ bridges or dozers, all of them carry large signatures. Infantry troops out in the open or in bunkers are visible and thus are equally at risk of being targeted at will.

Linearity of defences or that of an offensive force is becoming irrelevant as medium and long range missiles can strike in depth with precision. The weapon stations which deliver the ordnance may be manned or unmanned. It is really up to the enemy’s design of battle how he wishes to engage his adversary.

This calls for two imperatives for survival and unhindered continuity of operations– (i) increased mobility and (ii)protection. Protected mobility thus is an imperative in modern battlefields.

Next, in order to operate as a unit in the increasingly chaotic and destructive environment, robust communications and continuous situational awareness are a must. To destroy the enemy facing you, appropriate (read smart) firepower ought to be integral to a tank.

This thus gives you a tank of the future – a highly mobile, protected platform with increased situational awareness and firepower.

What then has changed?

A few thoughts (as the subject is vast and complex) – Protection must come through active means and not armour thickness. This will result in considerable weight reduction and yet better mobility and endurance. Smaller engines and transmission systems thus needed will reduce the weight further and ensure greater mobility. As we move towards electric battlefields of the future (a different subject to be covered under this column subsequently), an electric engine with a small auxiliary engine is plausible.

Next, switch to smart munitions for better, precise and effective fire power. A healthy mix of direct firing and smart munitions is recommended. Numerous options and combinations are on the horizon today and are likely to improve as we go into future.

Mere night fighting capability is passé, an outdated concept. Situational awareness must be promoted to the next level. Built in sensors should facilitate ‘see through’ armour and every combat team should be equipped with its own drones for increased surveillance and to enhance the effect of fire. Increased arc of surveillance will allow the elements of a Combat Team to remain dispersed within the secure area and engage unseen threats.

In short, future tank is a lightweight, sensor driven, highly mobile and protected platform which can fire smart munitions at longer ranges, capable of fighting alone and as part of a team. Sensors may be fitted or tethered to the tank.

For long, Artillery has been regarded as a major battle winning factor. Fire support, fire assaults, restricting enemy movement and demoralising the enemy through casualties are some of the roles and tasks allotted to and performed by Artillery. That has not changed.

However, Artillery gun systems, ammunition stockpiles and wagon lines also carry a big signature. Gun positions one or two bounds behind the frontline no longer ensures safety. Static guns and gun positions are easy targets for the enemy missiles and precision munitions which can be launched through a variety of means. Advent of high tech surveillance means, armed drones/UAVs and precision rockets and munitions have made it easy to target the guns and gun areas. Most gun systems with no or limited mobility have become highly vulnerable to enemy surveillance and fire.

(i) Provide in built mobility to artillery guns

Mounted Gun Systems provide a pragmatic solution to the first suggestion. They can be tracked or wheeled. Ammunition replenishment can be done through a vehicle with equal mobility. Since it is an expensive preposition, all guns that are being built must have shoot and scoot capability at the least.

Tubeless artillery munitions are already on the increase. To begin with, long range rockets, guided at that, are a ready solution wherein massive fire can be directed at the target from long ranges.

Adding to this capability are loitering munitions which can hover over an area for a couple of hours and engage opportunity targets.

Armed drones provide the next option. They can strike silently and in depth.

A host of missiles being developed the world over with staggered operational ranges can effectively augment artillery fire.

Artillery units of the future thus would be a mix of mobile guns, rockets, missiles, unmanned platforms and loitering munitions. Tubeless delivery of warheads will be in vogue. Precision munitions will become cheaper as technologies proliferate. Ammunition tables will see a considerable reduction as a byproduct of increasing accuracy.

But given the current levels of means and surveillance and precision of weapon systems, infantry soldiers, hitherto relatively safe, are now increasingly at the risk of being picked up and targeted. They are at risk whether inside or outside their defensive positions. Out in the open they are unprotected, and inside their field works they are static.

What then should be done to enhance an infantry soldier’s survivability and his effectiveness in operations?

The first issue is survivability. Provide the infantry with protected mobility to enable him to traverse the battlefield faster with safety. There exist a variety of vehicles which protect the soldiers from a plethora of threats like mines, small arms fire and artillery shrapnel etc. Mobility by itself provides added protection and survivability. Concepts of marching forward or use of TCVs/HMVs are outdated. We need modern armoured vehicles (APCs/ICVs) for carrying the infantry in battle.

In mountains and inhospitable terrain, we can now devise unmanned robots which can act as infantryman’s buddy. They can carry battle loads and /or weapons as the need may arise. Exo skeletons are another practical option to assist an infantry soldier move faster with his battle loads.

BPJs, helmet mounted vision devices and PDAs should be treated as standard kit in 2020s. Protected mobility, added means for situational awareness and enabling technologies for functioning effectively as part of a combined arms team are imperative for future infantry soldier.

Battlefield Management System. Situational awareness is as important for infantry soldiers as it is for armoured columns discussed earlier. ‘Infantry soldier as a system’ is a valid concept going into future. With increased mechanisation, a soldier’s orientation is of utmost importance.

Increasing number of gadgets and sensors will also demand added power. Power sources and power management thus will be the next challenge for a future soldier.

There will be a radical change in tactical drills as frontlines will be rendered meaningless. We got glimpses of it from isolated actions in Syria and Armenia- Azerbaijan conflicts. But as we indulge in crystal ball gazing for future ops, we must bring in the required changes in conduct of various operations, keeping pace with changing technologies.

Many armies are in the process of transformation, in that, the reorganisation is aimed at ensuring greater synergy amongst various arms in order to homogenise them into a seamless and effective fighting unit. Integrated Battle Groups are an example, and we need to see more of them.