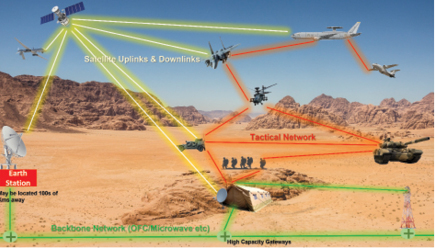 Majority of militaries in the world dominantly possess conventional military hardware in their arsenal with smatterings of new weapon systems and munitions. However new technologies have emerged in the past two decades which are rapidly altering the landscape. Relatively inexpensive and simple to use, many of these technologies lend themselves to remotely controlled operations thereby making them even more attractive. Providing a massive edge to the user, these technologies are commonly referred to as disruptive technologies.

Disruptive Technology in military may be defined as “technology or a set of technologies that radically alters the symmetry of military power between adversaries. Its effect, thus, results in altering the doctrines, plans and methods of warfighting”. Autonomous platforms, Cyber Warfare and Unmanned Aerial Vehicles have already begun to impact warfighting. Directed Energy Weapons, Big Data Analysis, Internet of Things and Artificial Intelligence are nearing operationalisation which will have a major impact on warfighting in future. Threats and nature of platforms needed to counter them will change dramatically. In short, technology will once again alter the military landscape.

Tactical battle drills must keep pace with emerging technologies and military hardware. Recent conflicts around the globe (Syria, Armenia- Azerbaijan) have proven the asymmetry that new technologies can create and resultant massive advantage to the military which seized this initiative.

This edition will reflect upon some of the major tactical changes which deserve consideration in military operations in view of emerging technologies. Coupled with other factors like terrain, climate, demography and adversary’s capabilities, militaries must derive their own lessons.

Contours I. Electromagnetic spectrum is the fourth dimension in future wars will be fought

Contours IV.  Shape and future of land based platforms

Contours V.  Innovation in tactics and strategy for war

Watch this space for more

Given India’s declining defence spending, persistently low investment in R&D and a small defence industrial base; there is a need to examine how these emerging Disruptive Technologies could shape the security environment and its military modernisation strategy. India faces complex threats and challenges that range from conventional, nuclear to sub-conventional spectrum. Both China and Pakistan have reported setting aside significant national effort in developing Disruptive Technologies such as cyber, information warfare (IW), artificial intelligence (AI) and unmanned autonomous systems. Commercially accessible technology advancements can be adapted for military use to advance Disruptive objectives. Off the shelf available drones have been weaponised by ISIS and used as a potent hybrid threat.

What exactly is the effect of disruptive technologies on warfare? In broad terms, it entails the following:

♦    Linearity of operations and classical phases of operations be it defence, attack, or any other type, will become increasingly irrelevant as targets in forward, intermediate and depth areas can be addressed simultaneously (or even in the reverse order). Earlier it was left to the Airforce and long range vectors to address targets in depth. Artillery fire at its extreme ranges would neutralise targets up to middle depth. With long range precision rockets, numerous types of missiles, UAVs, Armed Drones and Loitering Munitions in force, a major surprise awaits troops and platforms alike. This one factor, common to all types of operations will be singularly responsible for major changes in tactics at the theatre level.

♦    EW and Cyber-attacks can disrupt and delay mobilisation of troops, transport and military hardware,

♦    Proliferation of unmanned and autonomous platforms will cause a massive impact as machines will destroy and kill without emotions or remorse. There will be no ethics whatsoever,

♦    Assembly of large body of troops, equipment, vehicles, munition dumps can be detected, thus, is great at risk. Assembly and movement therefore ought to be need based for minimum required time,

♦    Movement of Logistic and ammunition convoys and trains is at risk of detection and engagement,

♦    Multiple means to direct fire and determine Post Damage Assessment. Physical reconnaissance and surveillance may not be required for such missions,

♦    Fixed defences can be attacked by precision and lethal weapons,

♦    Manoeuvre remains key, but the teams must remain small.

Such a scenario which seems very plausible in the coming years will impinge severely on current methods of warfighting which envisage Ops of war in well laid out phases in a symmetrical manner. Linearity in defensive and/or offensive operations will not be practical in a sensor driven environment which will use EM Spectrum to breach frontlines. Guided, loitering and autonomous precision munitions riding on the back of such sensors can cause massive damage and cripple operational plans in quick time.

Impact can be summarised as follows:

♦    Augment surveillance through sensors and reduce the number of personnel,

♦    Obstacle layout for enemy soldiers and platforms must be bolstered by own unmanned platforms and surveillance means,

♦    Devise Electromagnetic screens in addition to physical obstacles to detect and neutralise enemy’s platforms attempting to enter own territory and airspace,

♦    Defensive positions should be deceptive in design; to be occupied at the fighting hour. The layout should facilitate holding troops safely till released for occupation of defences,

♦    Mobile reserves should be held in significantly greater strength to reinforce positions threatened by the attacker in quick time. Reserves should be flexible enough to remain capable of switching sectors and roles rather than traditional counter attacks,

♦    Counter attacks and counter penetration operations acquire a new connotation in fast, mobile and multi-domain offensive operations by the enemy. Simultaneous engagement of enemy’s C4I (or C8 as some put it) network and logistics is possible and must be resorted to isolate offensive formation’s forward echelons,

♦    Air defence umbrella along with an Electromagnetic spectrum defensive cover is non-negotiable. Troops in field defences and even the mobile reserves cannot be left to fend for themselves in the event of from aerial, unmanned (autonomous or guided) or EM threats. Air defence and EW groups must be integrated at all levels.

Offensive Operations. Offensive operations must always achieve surprise. A planned offensive is likely to be picked up by the adversary or one of its friendly/partner nations. Signatures are more pronounced for ground forces as traditional methods dictate mobilisation, concentration, assembly and grouping of various attack echelons and troops prior to launching an offensive. Even in the case of ‘Attack from the Line of March’ much of the actions enumerated will have to be undertaken, thereby giving away surprise as the actions are picked up by various sensors and sources in multiple domains.

Limit of penetration is another major issue. Pincer movements of yore may not be possible unless the attacker enjoys complete air and EM spectrum superiority.

CBRN backdrop where applicable, precludes the possibility of deep thrusts as the nuclear threshold may be breached, particularly if the area is sparsely populated.

Broadly the impact on offensive operations is as follows: –

♦    Quick and stealthy mobilisation. Long drawn moves on rolling stock and large convoys can attract attention and can be at the mercy of long range precision missiles and other weapon systems,

Another threat to mobilisation stems from Cyber Warfare. Power grid failures, interference with ATCs, and bugs in the transportation systems can seriously impede movement and considerably slow down mobilisation. Troops and military hardware is highly vulnerable during this period,

♦    Hitherto standard practice of collecting and grouping various elements of the attacking force in Concentration and Assembly Areas is fraught with danger. Closer to the point of attack (or breach in enemy defences) surveillance means will be present in greater density. It is almost impossible not to get detected, particularly if the force is large,

♦    An alternative here is to gather the elements in smaller numbers to present an insignificant signature, or a large number of signatures, well spread out to confuse the enemy about relative priority of the targets,

♦    Signature management is another significant aspect. Camouflage is no longer restricted to visual domain. In a sensor driven environment it is radar absorption and IR attenuation which will matter more than visual concealment,

♦    Unmanned and autonomous systems should be interspersed with manned platforms particularly in the leading elements,

♦    All arms teams are imperative to ensure an all arms composition at Combat Team (company) levels and above, fully equipped for the impending task. Integrated battlefield mandates integrated fighting teams. These teams must be capable of operating individually. They should have the capability to combine together off the line of march when the tactical situation demands and disperse quickly after the task is completed.

Dispersion within the team should also be facilitated by robust communications,

♦    Softening up of the objective is passe. Increased use of precision munitions to take out fixed defences and command and control centres must be resorted to before launching a physical assault. This will hasten up destruction and capture. However, holding the captured position and turning the defences may be a more difficult task if the enemy possesses similar capabilities,

♦    Exploitation and reorganisation beyond the objective is part of conventional teaching. This is set to change. Assaulting units and formations should continue with their victory march way beyond the objective in a seamless operation. That will reduce the significance of the objective captured by the assaulting troops. Reorg must be built without halting the momentum,

♦    Design of battle should factor in issues like rest, refit and turnover of troops and equipment, areas to be held and rapid advance of support elements. It will be like a jigsaw puzzle upon which success will hinge.

There will be increasing instances where troops will not know what hit them (figuratively speaking).

New technologies are stealthy, sneaky, precise and lethal with long range and devoid of ethics and emotions. They can make future wars deadly in terms of casualties.

No wonder then that recently two of the largest and modern armies in the world had a skirmish with sticks, batons and stones. The senior commanders on both the sides did not escalate, perhaps aware of the dangers that a full-fledged war can bring!