Coronaviruses, Past and Present Track Records 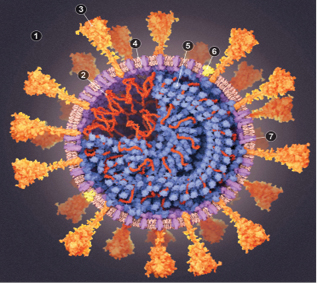 All about viruses and their strains, some known some not known to us; and a strong hint of something amiss !

♦             It binds to a lung cell. When a virus spike protein latches onto an ACE2 receptor, a protease enzyme slices off the spike’s head,

♦             It slips inside. This releases fusion machinery, part of the spike’s stem that is compressed in a spring like state. The virus and lung-cell membranes fuse,

♦             The machinery inserts itself into the cell membrane and a channel forms, allowing N proteins and RNA

♦             It replicates once virus RNA is inside a cell. Some of these proteins create protective vesicles, or sacs,

♦             The virus uses its own RNA copying machine to make duplicates of RNA inside the vesicles. Some of the copies are utilized to make more viral proteins, such as the spike. Other new virus particles break out of the lung cell,

♦             Finally, it breaks out. Vesicles carrying newly formed viruses merge with the cell membrane, opening a channel that allows the viruses to exit. One cell can release hundreds of virus copies. Some are killed by the immune system, some viruses head off to infect more cells. Others are exhaled into the air.

Last year I had said that 2020 would be a difficult year for our elderly, but young healthy people would just sale through. In March 2020, WHO and its famous emissary, Dr Soumya Swaminathan, declared 98% of adults would fall sick, and 1-2% would die. By April we discovered that some 10,000 soldiers trapped on various Covid infected aircraft carriers in distant seas had been ordered home. All survived, though most contracted the infection. Apart from flu like illnesses, Covid-19 behaved well. No deaths occurred, and just one patient required ICU care. Thus in late April 20, we could judge that it would be milder than what WHO proclaimed. Less than 1.5% infected adult Indians died, and asymptomatic infections predominated.

Their projections didn’t fit well with our existing knowledge of coronaviruses. Coronaviruses have been on the planet much longer than human beings. When we evolved from apes 300,000 years ago, our ancestors had equipped us with immune systems fully capable of controlling coronaviruses and tens of thousands of other germs.

Bats, and many other species have their own coronaviruses. Coronaviruses mutate often, but for our robust immunity it was never more than meeting a well-known acquaintance who was wearing a new dress. Many microbes are our friends and protectors, and our body nurtures and mothers them. Even two species of mites are permanent residents on our skin. They party at night, and then retire into hair roots. All life on earth is about mutual coexistence.

Till 2008, human coronaviruses caused a few mild colds. Whenever they intrude, our immune system can kill them and our intestines even assimilate their proteins.

In 2008, WHO announced the spread of a new coronavirus which caused pneumonia! We were warned of an impending pandemic. India witnessed a few months of viral pneumonia and elderly deaths (SARS – Severe Acute Respiratory Syndrome). A few years later, another mutant coronavirus (MERS) invaded the Middle East and proved more deadly. SARS and later MERS had a mutation which no informed person can accept as natural. Human coronaviruses attach to the lining of our nose. These attach to our previously inaccessible ACE receptors of lungs, intestine, blood vessels and brains! Coronaviruses that had only knocked on our front doors for millions of years had mysteriously acquired very specialized armamentarium to attack our internal organs! WHO, and our virologists failed to raise the issue in public. The two elephants that entered our room in 2008 and 2013 were accommodated without fuss.

Covid-19, the third in line, was reported by China a few years after Wuhan University received research grants from the US government and technical help from University of Carolina for bio- warfare research collaboration on coronaviruses. Such research on coronaviruses started in military research facilities in Texas many decades ago.

Covid19 has a genetic code with many additional deadly genes that do not exist in any previously encountered coronaviruses. The spike protein on its surface comes with a many fold faster action! The worrying news is that computer modelling provides alternate configurations even more adept! Thus, there is potential for more dangerous mutants.

Spike proteins of coronavirus have 2 subunits, the attacher subunit and the piercer subunit. After Covid19 attaches to cells in lung and intestine, things move even faster! In all earlier coronaviruses there are delays before coronaviruses make its ‘pierce into the cell’ move. The piercer subunit functions only after the ACE subunit has separated from it. Covid19 has special genes for this, a unique cleavage pit between the 2 subunits. It snaps when the virus attaches. Even the code used for the cleavage-pit genes is unique. The code has sentences of monkey language. It is not the previously inviolable coronavirus lingo.

The second wave caught us unprepared. No date or severity was foretold, and the force of the wave was inconceivable. The immunity acquired from earlier encounters didn’t give us protection from this wave’s strain. They are siblings, but unrecognizable by our versatile immune systems! Public resentment is understandable, but hard to imagine what better preparations were possible in the intervening time. No forewarning, rampant lockdowns, migrant labor, and economic slowdown were the ground reality. Some preparation was possible, adequate preparation was not.

One saving grace has been that the vaccinated had 80% protection against the second wave mutant. There is talk of repeated vaccination, as new strains will keep emerging. Will RNA vaccinations be our lifeline? Will all those without ‘vaccination passports’ be incarcerated, or succumb to succeeding waves of pandemic? The RNA vaccine technology being used for Covid19 has never been approved for use ever before, not even for farm animals. Although it is being encouraged for all, there is mounting evidence that those recovering from Covid19 develop vaccine sickness, and receive no protection.

Vaccines for malaria could not be developed despite 100 years of research. Vaccine for AIDS has not materialised in 40 years. More than 10 have become approved for Covid19 within months, and several more are in the pipeline. What has always required many decades does not apply to Covid19, dozens are tumbling out and getting approved.

One of the least known major scandals of the 20th century was the tetanus vaccination program coordinated by multiple top international bodies for many decades, the same that are coordinating present Covid19 efforts. Covering 60 third world countries, millions of young women received 5 shots each, ostensibly to prevent tetanus. The vaccine supplied to all the 60 countries was laced with β subunit of HCG, and induced permanent infertility. The outcry received various responses: ‘stabilize population in overpopulated politically unstable countries’; accidental contamination, but the tiniest has been a half apology, and by far the biggest has been cover up and denial.

With the second wave receding, we should think of our immediate future. How did this mutant tranche descend just months after the mysterious mutations of 2008 and 2019?  What are the chances for more waves? And how deadly will each be? Will each mutant strain be manifold more deadly? Is vaccine our saviour, or will it please to deceive? How many total deaths to expect from this pandemic and its consequences?

Bill Gates’ lecture on impending coronavirus pandemic 10 years ago had predicted it would solve 10% of our overpopulation problem. More ominous is the 75% decimation bandied elsewhere, and 95% figure etched on granite 20 years ago in 8 languages in Georgia Guidestones. The concerns raised by critics even before Covid19 was declared a pandemic were: enforcement of paperless money, implanted identification chips, population control, mandatory universal gene based vaccines with potential for subvert genetic manipulation.

There are many things that coronavirus has taught us, not the least that we should think carefully and discuss with people we personally know to be intelligent, knowledgeable and sincere.  Occurrence of multiple unusual and biologically impossible mutations demands we study this pandemic with an open mind, and not just hope that it will just blow away. We should ready ourselves for more bad news for the next few years even as we hope for better times. Understanding of human biology, immunity, its functions during health and disease, could help us defend ourselves the best we can, but the challenges look huge. Asking tough questions is an urgent responsibility.