Sub Title : China is going about its aim of creating a ‘Chinese Century’ and several nations are getting together to countervail the Chinese 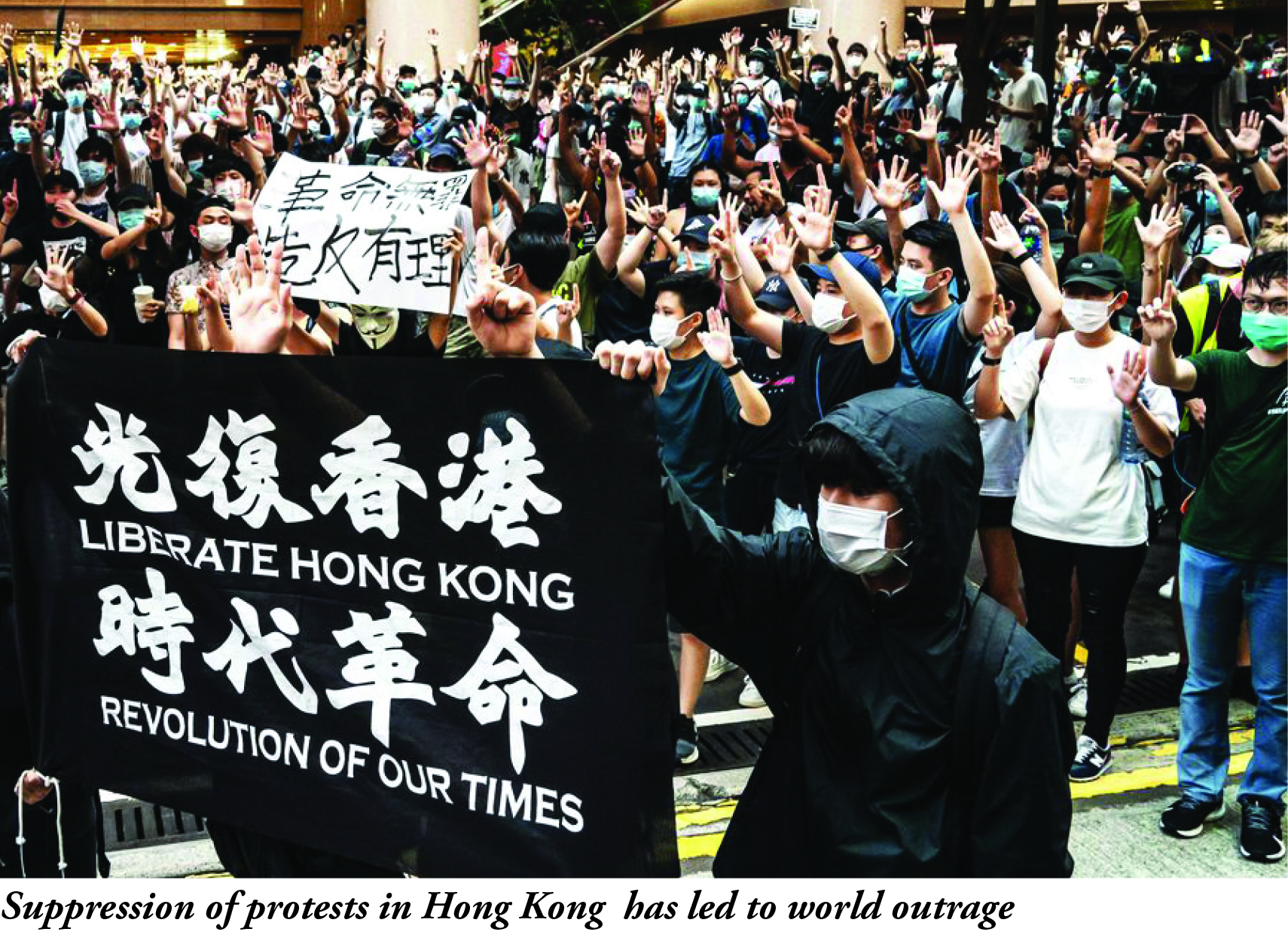 China is going about its aim of creating a ‘Chinese Century’ with an inexorable determination. Realizing what China’s mission portends, democratic nations are getting together to countervail the Chinese. As far as India is concerned it will have to strike a fine balance so as not to lose its strategic independence

The Communist Party of China celebrated its 100th anniversary with great pomp and pageantry this July. But then China has much to celebrate. Emerging from a civil war in 1949, the poverty-stricken nation has become a $16 Trillion economy, the second largest military and economic power and all set to be a leading superpower. China is going about its aim of creating a ‘Chinese Century’ with an inexorable determination. All this is fine. Unfortunately, China’s view of its rise and the means that it adopts to get there, contradict the world view of a stable and peaceful world order. And as its dangers get clearer, the world is closing ranks to prepare for it.

One has to only see the change in trajectory ever since Xi Jinping took over in 2013. Till then, China focused on building its economy and national strength, following the Deng doctrine of ‘hide your strength, bide your time.’ Xi feels that China’s time has come. It has embarked on an ambitious Belt and Road Initiative, increased aggression against Taiwan, followed by totally unjustified claims in the China Seas, and committed large scale atrocities on the Uighurs in Xinjiang. It has threatened to nuke Japan and has shed Indian blood on the LAC. And yes, it has infected the world with Covid 19, which it steadfastly denies. Its rapid ascent over the past half decade was aided by USA’s inward-looking policies under President Trump. But now, with the US taking center stage again, there has been a spurt of coalitions and initiatives directed at countering China – though, of course, never explicitly stated.

But then countering China will not be easy. There are views that it may implode as the Soviet Union did, but China is a different ball game. It will not collapse that way. It is too strong to be countered by any one nation now. It would require a grouping of like-minded nations – perhaps a ‘coalition of democracies’ – that can counter it in the strategic, economic and ideological domains and provide a countervailing balance to its influence.

The change actually began when COVID 19 hit the world and all indicators pointed to its origins in the Wuhan laboratories. China’s refusal to open the labs for investigation, and the knowledge that they deliberately suppressed news of its spread, has galvanized the spurt of anti-China sentiment. The de-coupling began as nations moved away from China towards more secure and reliable supply chains. Its aggression in Ladakh, Taiwan, the South China Sea while the world was pre-occupied with Covid was another rude wake-up call – but one which finally shook the world from its slumber.

Perhaps the first step that was collectively taken was the banning of Huawei from the proposed 5G networks, by the USA, UK, EU, India and a host of other nations with the realization that China had already infiltrated national networks to extract data and information. The actions in the suppression of protests in Hong Kong and the revelation of human rights abuses against the Uighurs in Xinjiang was another trigger that spurred world outrage. UK, USA, Canada and the EU imposed sanctions against China. Australia earned its ire when it called out China on human rights abuses and then cancelled two BRI deals with China. China has responded predictably in the “wolf warrior” mode, imposing its own sanctions, calling for a boycott of goods from nations that question its policies and turning away their imports. This is perhaps, just the beginning of the pushback against China.

For the first time, collective bodies have called for unified action against China. NATO has targeted China as a ‘global security challenge’ and has signaled a strategic shift towards the Indo-Pacific. The European Union too has realized the new geo-strategic reality and is shifting focus towards “an Indo-Pacific based on democracy, rule of law, human rights and international law.”

But the only concrete proposal has come from the G7 meeting which called for a unified front to compete with China. As a first step, it also proposed the ‘Build Back Better for the world’ or B3W – a brainchild of President Biden which calls for a joint infrastructure initiative that will provide a viable alternative to the BRI, and wean nations away from China’s predatory financing.

President Joe Biden’s doctrine to counter China to re-establish US world supremacy hinges on allies and groupings. But the USA and the world cannot just de-couple from China. It is an integral part of global supply chains and world markets are linked to it. It holds sway in global forums such as UN, and is required in global initiatives such as climate change, and even in fighting Covid. So, countering China in some fields has to be balanced with cooperation in others and that will make it even more delicate.

China’s authoritarian form of government can be best countered by democratic values. A loosely formed ‘coalition of democracies’ seems to be in the offing – led by the USA and supported by groupings such as Quad, the European Union, G 7 and others. That could perhaps form a common platform for democratic norms, human rights, and respect for international law, which China now flouts with impunity.

But it already may be a little too late. China has become a behemoth, too large to be contained now. The best that regional and world groupings can do is to ensure that it does not cross red lines that could lead to open confrontation.

But then, China already has crossed a few red lines – especially in the pursuit of its core interests – the South China Sea, Taiwan, Xinjiang, and Tibet. The nine-dash-line it has drawn to assert its claims over the China Seas, has brought it in direct confrontation with Japan (over the Senkaku Islands,) the Philippines (Scarborough reef and Spratly islands), Indonesia, Vietnam, and even Singapore and Malaysia. It has developed bases in the disputed water, reclaimed reefs and established a ADIZ to lay stake to its claims – even though its claims have been rejected by the International Court of Justice. The USA and other navies are increasing their own freedom of navigation exercises in these waters which could lead to a dangerous flash point.

Another emerging flashpoint is Taiwan, whose reunification with China is ‘a sacred duty’. There have been a spate of air and naval intrusions across the straits of Taiwan (127 in the past year) as China ramps up the pressure. Any of these could go out of hand. An oft played scenario is the invasion of Taiwan by the PLA which could set off the US – China confrontation that many have predicted.

Although USA still holds a technological and numerical military edge it is slowly eroding. China has added 90 new ships and submarines to its navy on the past five years. It now has 360 naval vessels compared to 297 of the USA. The technological edge is also likely to be surpassed by 2035 or so. And the stronger China gets, the more belligerent will its actions be. Its claims will increase in the China Seas, Taiwan and Tibet – and against any of the 17 nations it has territorial disputes with. And like the Germany of 1939, its actions could precipitate a regional or global confrontation.

China is also forming its own alliances. Russia and China have come together in a 20-year Treaty of Good Neighborliness and Friendly Cooperation’ which will enable them to operate in tandem in the Indo-Pacific and Europe. China has also signed a 25-year Security and Economic pact with Iran, which will see it invest $400 Billion in exchange for heavily discounted oil and gas. Pakistan too, is another vital ally which it uses to promote its interest in Afghanistan and against India. And then there are the nations which it has got into its financial embrace through the BRI. Unlike the USSR which did not have any real allies, China has forged a ring around itself to safeguard its interests.

But it does not mean that China has no weaknesses. Its economy is stalling and needs to regain the heady 9 percent growth to maintain its trajectory. Its debt is a staggering 220 percent of its GDP. Its 1.4 billion population, which was its greatest strength is diminishing and by 2040 or so, its work force will reduce considerably. And most of all, the authoritarian model of the Communist Party is susceptible to internal unrest. There are fears of another Tiananmen Square incident, or even of a Gorbachev like figure rising within the Party.

India and China began in the same place in 1988, when China embarked on reforms and surged ahead. As India developed in the early 90s there was talk of ‘Chindia’ – India and China leading an Asian Century. All that has dissipated now. China no longer talks of an ‘Asian Century’ only a Chinese one. India is seen as just a pretender and Chinese actions in Ladakh have shown that future relations are going to be adversarial.

Besides Taiwan and the South China Seas, China’s main concern is Tibet and one of its long-standing aims is to amalgamate the five fingers of Tibet – Ladakh, Nepal, Sikkim, Bhutan and Arunachal Pradesh. Ladakh holds special strategic importance due to its proximity to the CPEC projects running through Aksai Chin. After the clashes in Galwan and China’s obdurate refusal to move back, its future strategy seems clear. They will tie down Indian formations all along the LAC by similar pinpricks, drain our resources and hamper our growth.

China has also successfully ringed India by its growing presence in Myanmar, Bangladesh, Sri Lanka. China has an interest in the waters of the Indian Ocean, and after gaining bases in Gwadar, Hambantota, Djoubiti and perhaps even in Myanmar at a later juncture, its actions there will increase. The prediction of the future of the 21st Century being decided in the waters of the Indian Ocean could well ring true.

India cannot counter China alone, and the gap in capabilities must be dispassionately viewed. Their economy is three times the size of ours and their military spending at $252 Billion annually, dwarfs our own defense budget of $ 65.7 Billion. Yet, China has overplayed its hand which has led us to shed our earlier reticence and now whole-heartedly tilt towards the US and embrace alliances such as Quad. For the US and much of the world, India is seen as a natural ally to balance China. That position can be utilized, but we should not get exploited by distant powers and thrust into a needless confrontation with China. Our working relationship with them should be maintained, and even if relations are no longer friendly, they should remain cordial.

Though the entire world is aware of the dangers of an assertive China – it has to be viewed in balance by India. Trade and commerce should continue (China remains our largest trading partner and even during the Ladakh crisis, trade continued at $77 billion – even surpassing the trade with USA). We should collaborate in areas such as climate change, countering terrorism, and even providing stability in the region in places such as Afghanistan. We should embrace the alliances that are emerging, but still maintain our independent stance. And most of all, we should be aware that the relationship could become overtly confrontational virtually at any time – and develop the capabilities to be able to counter it.