Sub Title : Drones, the popular name for unmanned aerial vehicles (UAVs), are a new toy for hobbyists, a tool for commerce, and a multi-purpose device for the military. They are the perfect warriors with immense potential and besides they have a great nuisance value as they can intrude private space of individuals. In this article we cover the counter measures in the Civilian Domain 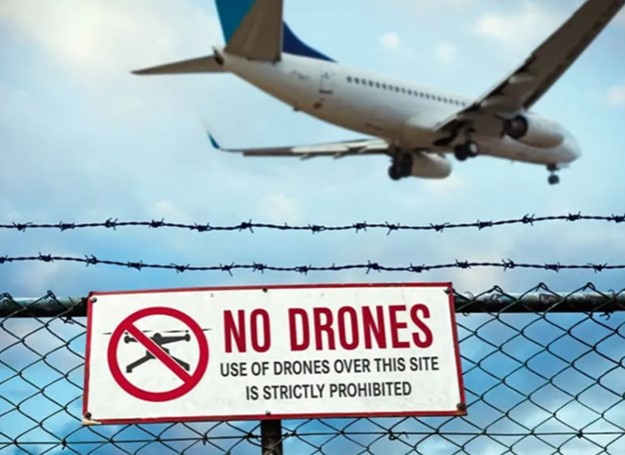 In the Age of the Almighty Computer, drones are the perfect warriors. They kill without remorse, obey without kidding around, and they never reveal the names of their masters.

In Aug 2017, Aircraft Carrier Queen Elizabeth of England was docked at Invergordon, Scotland when an amateur photographer flew a drone close to the giant battleship. When the drone sensed a high wind risk, it landed itself on the ship. The pilot told BBC that he could easily have carried two kilos of High Explosive and left it on the deck.

A failed assassination attempt was made on Venezuela’s President Nicolás Maduro on 4 Aug 2018 with Off the Shelf Drones. Two drones loaded with 1 Kg of explosives each were flown close to the president while he was addressing a military parade. Reportedly one drone was electronically diverted from its course and the second crashed against a wall.

20 Dec 2018 saw drones dramatically disrupt air travel after someone brought London’s Gatwick airport to a complete halt by flying drones intermittently over the airport’s lone runway. Air traffic at other London Airports, including Heathrow was also disrupted momentarily  over fears of a coordinated drone assault against all five of London’s commercial airports.

In Dec 2019, heavy-lifting drones were used by Pakistan to drop AK-47 rifles, counterfeit currency and narcotics in 10 sorties spanned over eight days in Punjab’s border districts.

Evidently, threat even in the civilian domain is real and contemporary; drones cost little, and availability is aplenty. Drones today represent asymmetric threat against civilian infrastructure and population. They can cause economic and personal disruption to thousands of people and more without even striking a blow; their mere presence can cause fear and panic.

Characteristics of the Drone That Make it Useful as a Weapon

Drones being small, silent and discreet are difficult to detect and bring down. They can be pre-programmed and/or remote controlled even with smart phones. Rapid miniaturisation of electronics and batteries are a boon to the growth of Drones. Additional features like Auto landing, Dynamic homing and Orientation control provide greater stability and effective control. High-end cameras with axis stabilization provide a smooth and stable recording experience with high-quality videos. They are symmetric in shape and can fly in any direction. They can be armed with weapons, explosives and/or cameras; in the civilian domain, as a weapon they can:

Detection of low-flying drones is very difficult. Payload capabilities of drones are increasing by the day, and it is a dangerous sign.

Any control measure would necessarily have to be precise and real time in areas populated with people and infrastructure. To observe, detect and analyse a rogue drone, would require tracking its flight path accurately. An effective sensor system must be able to:

Once a drone is detected, one or more of the following countermeasures can be executed depending on the nature of the threat.

The countermeasures will have to be layered and gridded to provide an effective defence shield; any single point of failure is simply unacceptable.

Whatever be the counter measure, it is essential that a drone is preferably brought down intact to allow forensic analysis and intelligence gathering to eliminate threats and prevent future attacks. The following commercially available measures can be considered:

As the concern surrounding drone safety continues to grow, fresh and innovative technologies will continue to evolve; does it indicate a new kind of an arms race?