Sub Title : The standoff between Iran and US is becoming uglier by the day and may have serious repercussions 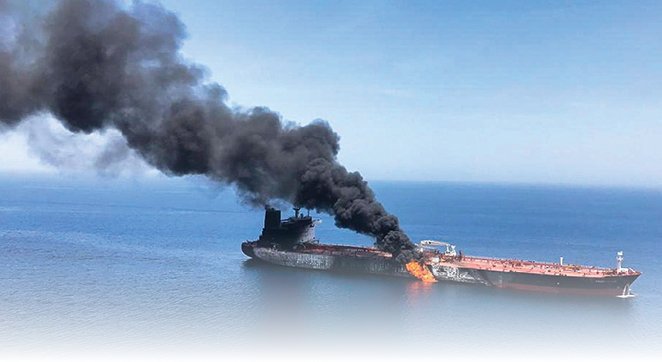 The standoff between Iran and US is becoming uglier by the day with Trump  sending additional troops to the Middle East, Iran downing a US Global Hawk  and Trump ordering  a punitive strike on Iran; which was abandoned minutes before it was scheduled. Escalation of any kind does not portend well for the world at large as it has serious ramifications. Maybe Trump has another game plan

This sounds eerily like the last uncalled war that the US started. In 2003, on the unfounded premise that Iraq possessed Weapons of Mass Destruction, the US charged into Iraq, toppled Saddam Hussein, destroyed the nation, and destabilised the region and gave birth to the Islamic State. Should they precipitate a war with Iran now, on similar nebulous premises, the consequences would be worse, much worse.

Donald Trump was elected on the mandate that he would get the US out of wars. Yet by his actions it seems that the US is on a collision course with Iran. In gradually expanding the envelope of action by applying ‘maximum pressure” to force Iran to renegotiate the Nuclear deal, he has embarked on a dangerous game of ‘I dare’ where just one miscalculation can send events spiralling hopelessly out of control.

The seeds of the drama were sown last year, when President Trump walked out of the US-Iran Nuclear Deal or Joint Comprehensive Plan of Action (JCPOA) as it is correctly known. This deal signed along with UK, France, Germany, China and Russia, forced Iran to give up its nuclear weapons program in exchange for the lifting of sanctions. Trump’s grouse against the deal was that it only curtailed Iran’s actions till 2030, after which it was free to pursue its weapons programme and that it imposed no constraints on its missile capabilities. Both points are valid, but Iran assiduously kept its part of the bargain and halted further enrichment of Uranium as required by the deal, till the fresh standoff started.

The re-imposition of US sanctions and its curbs on the sale of Iranian oil means that no country can deal with Iran for fear of inviting US sanctions upon themselves. Such is the power of the US economy, that no nation, including India and China who are so dependent on Iranian oil have little choice but to fall in line. The Iranian economy has tanked. GDP has dropped by 6%, inflation has climbed to 50% and the Rial has plummeted. Oil exports have dropped from 2.5 million barrels per day to around 600000 barrels. And with economic hardship has come angst and resistance. The hard-liners in Iran have taken over and their proxies in different states have been activated. Chants of “Death to America” have re-surfaced and predictably, it has restarted enriching of Uranium to surpass the 300 kilogram limit stated in the deal.

The targeting of four Saudi oil tankers off the coast of UAE in mid-May and the launch of a drone attack on a key Saudi oil pipeline were perhaps the first volleys of the conflict. This led to Saudi retaliation in the form of an air attack on Houthi rebel positions in Yemen which led to a breakdown of the ceasefire in the Yemen war. To add to the tensions the aircraft carrier, ‘USS ABRAHAM LINCOLN’ has been sent to the area along with 1000 additional troops to reinforce the 6th Fleet and the 20,000 troops already there. The next flashpoint came a month later when two oil tankers, the Norwegian “FRONT ALTAIR’ and the Japanese ‘KOKURA COURAGEOS’ were attacked, presumably by limpet mines and set ablaze near the Straits of Hormuz. Although Iran has denied all involvement in the attack, it was a clear signal that it could intensify attacks on shipping and block the crucial oil artery through which one fifth of the world’s oil passes.

Close on its heels came the shooting down of a US RQ-4 Global Hawk drone by a Republican Guard missile, claiming that it was inside Iranian air space – a charge the US denies. A US retaliatory strike was ‘cocked and loaded’ but fortuitously halted by President Trump with just 10 minutes to go on the grounds that it would have caused around 150 casualties. It contended itself with a cyber-strike that disabled Iran’s missile and radar systems. These are actions just short of war, but that thin line can be crossed virtually at any time now.

Moving Back from the Brink

War clouds still loom large over the Middle East. Indian warships escort naval vessels through the troubled straits, nations have recalled their diplomatic staff, the US has beefed up its strength there and UAE and Saudi Arabia have redeployed their troops in the direction of Iran.

Iran has threatened to launch its proxies–the Hezbollah, Hamas, Houthis and Shia militia and the intensification of Houthi attacks inside Saudi Arabia show that the process has started. It has recommenced Uranium enrichment and is poised to break the 300 kg cap of Low enriched Uranium which it is permitted to keep according to the deal. That would mean that the deal is broken from both sides and the gloves are truly off.

So what are the options ahead? Once Iran breaks its part of the Nuclear deal, even the other parties to it – France, Germany, UK, China and Russia- will not be able to stand by it. One face-saving measure would be for the US to provide a partial waiver of sanctions to enable Iranian oil to flow and revive its economy in return for Iranian commitment to the deal. The deal could then be renegotiated to include some key clauses i.e. provisions beyond 2030, inclusion of missile capabilities within it-or even have the same deal repackaged to show a political victory to both sides.

Only it won’t be easy now. It took five years of negotiations to get Iran to come to the table for the first deal. With the US breaking the deal, Iran has lost complete trust and will be more intransigent. Internal opposition to the deal is also intensifying with the hard liners holding sway and even President Hassan Rouhani, who was one of the adherents of the deal being no longer on board. The example of Kim with his nuclear weapons, whom Trump has so assiduously courted and even met on the DMZ of the Koreas, will reaffirm the belief that it would be better to develop nuclear capabilities, rather than sacrifice it, and then negotiate from a position of strength.

But if a compromise is not worked out, what are the options? Neither the USA, nor Iran, nor anyone in the world (except for Israel and Saudi Arabia) want a full-fledged war. The US could resort to air strikes against Iran’s nuclear facilities, but those are deep underground and will only delay its programme, not halt it. So two years down the line we will have a wounded Iran, armed with nuclear weapons and missiles, which is more belligerent than before.

The only way to truly remove its nuclear capability would be for the US to launch a full-fledged invasion of Iran – with the help of Saudi Arabia and Israel – as they did in Iraq on the misplaced concept of regime change. Only they may end up biting more than what they can chew. The Iranian Republican Guards Corps is an efficient and motivated force. They have around 32 batteries of Russia’s formidable S -300 Air defence system. They have the largest ballistic missile force in the Middle East and an array of sea-skimming anti-ship missiles. They also have a region wide network of proxy groups which can extend the conflict into Syria, Iraq, Lebanon, Saudi and Gaza with a series of guerrilla strikes. It would definitely be no pushover, and a burning Iran will ensure that the entire Middle East goes up in flames, hurting not just US interests, but the entire worlds’.

The actions in the Gulf have hurt India’s interests badly. Iran is our second largest source of oil and we pay for much of it in Indian Rupees. We have also invested heavily in Iran, especially in Chabahar. This port, which was to be our gateway to Central Asia, will now become defunct. The turmoil in the Middle East will also affect our diaspora of 3.8 million and the much needed revenues they send in. The increase in oil prices – they have already shot up by 5% – will put a huge drain on the exchequer and impact our growth.

There is an interesting school of thought that says that US actions in the Gulf are part of a deliberate strategy to increase the price of hydro-carbons and thus curtail the growth of China, India and other developing economies through a form of ‘Carbon Imperialism’. The US and Western countries no longer need Gulf oil. It is Asian economies that are dependent on it and the turmoil in the Gulf and resultant economic chaos would help retain America’s economic supremacy.

But then it is in no one’s interests to have another war. We can only hope that both sides pull back from the brink and that Iran agrees to comply with the deal and perhaps incorporate other concessions; the US agrees to halt all sanctions and also ratify the deal in the Senate so that it cannot be broken on the whim of a President. Who knows, a turnaround may still be possible. Trump went from threatening to obliterate North Korea to making Kim ul Jung ‘a dear friend and a great guy’ in just a few months. He too has a re-election campaign coming up and would not want to risk the political costs of a war. Both sides could talk, renegotiate and each claim victory. Else another conflagration in the Middle East will singe the entire world very badly.

Tailpiece: At the time of going to print, the situation in the Gulf has escalated, with the Royal Navy having impounded a Iranian tanker. In retaliation, soldiers of the Iranian Republican Guards rappelled from a helicopter and seized the British tanker ‘Steno Impero’ in the Straits of Hormuz. As tensions rise, it is hoped that cooler heads prevail and the region still moves back from the brink.