Sub Title : The country`s dream for self reliance can be brought to fruition if it is well strategized 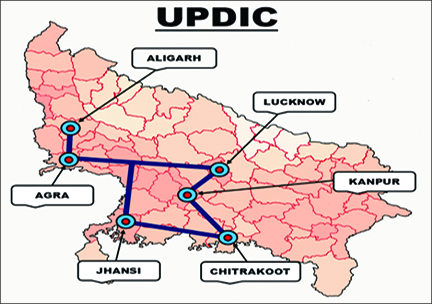 The country`s dream  forself reliance can be brought to fruition provided it is intelligently strategized with military taking ownership and MOD driving this change with innovative policies. A collaborative approach entailing everyone`s effort can provide the critical mass to make the DICs sustainable

Defence Industrial Corridors were established to spearhead the Govt`s initiative of Atmanirbhar Bharat by creating  new environmentally and technologically advanced areas that hosted  constituents of the country`s defence industrial base, innovative industries and their associated knowledge workers. The Government has set up defence industrial corridors (DIC) in Uttar Pradesh and Tamil Nadu. In pursuance of this, the Ministry of Defence identified six nodes in Uttar Pradesh Defence Corridor and five nodes in Tamil Nadu Defence Corridor. On 26 July 2021, the Ministry of Defence informed Rajya Sabha about the land acquisition for the two DICs. These defence corridors aim to create a well-planned and efficient ecosystem leading  to increased defence production in the country. As per present forecasts the UPDIC has the potential to generate employment for more than 16,700 persons, and the TNDIC has the potential to generate employment for 25,000 persons in the coming years.

Uttar Pradesh DIC is being set up by the Uttar Pradesh Expressways Industrial Development Authority (UPEIDA). It consists of  six nodal points namely; Agra, Aligarh, Chitrakoot, Jhansi, Lucknow and encompasses 197 hectares. A stand out advantage  is the proximity to a large number of R&D establishments, Ordnance factories, DPSUs and presence of military`s integral industrial base and  top notch academic institutions. UPEIDA has inked 55 MoUs with private industries, worth potential investments of Rs.7449.33 crore. Industries are expected to be provided with uninterrupted power and water, single window approvals, highway connectivity, labour permits and simplified procedures for quick reimbursement of incentives and subsidies.

Tamil Nadu Defence Industrial Corridor is being set up by the Government of Tamil Nadu. It consists of five nodal points i.e. Chennai, Coimbatore, Hosur, Salem, Tiruchirappalli and is spread over an area of 283 hectares. Tamil Nadu Industrial Development Corporation (TIDCO), the nodal agency, has inked 22 MoUs with private/public industries, worth Rs.4800 crore. With a vast network of DPSUs and OFs, Tamil Nadu is a highly suitable destination for the defence sector with a number of inherent advantages like a well developed industrial base, network of airports and seaports, global data connectivity with submarine cables, large FDI receipts, availability of high calibre skilled labour and presence of a large number of defence PSUs in the region.

The Make in India initiative is a strategic step towards Defence Industrial capability building and long term technology security. It is important that dependence on foreign platforms and sourcing of military capability from overseas is reduced or else the likelihood of capability failure at crucial times will always be high, since crucial dependencies are retained by suppliers. It is also important from the strategic assurance and influence angle. A self-sustaining  indigenous defence industrial base should be the envisaged end state two to three decades later, where innovation and injection of new ideas contribute to achieving a battle winning edge over the adversary. At least in the field of general munitions, energetics, armaments and soldier systems one cannot depend on panic procurements from abroad. The crucial element of demand from the military exists. The supply side is what needs to be addressed by designing a self sustaining eco system that drives innovation at the DICs and regularly moves these into the development pipeline.

It is essential to build an environment to mesh in extant indigenous capabilities  and foreign technology  to craft out  systems that the military wants. If DICs are left to freewheel without a strategy – the end result may be half baked as has happened with some IT  parks – unstable, unbalanced, uncoordinated and ultimately unsustainable. Instead, it needs to be scripted according to a  Strategic Plan  and pre-defined milestones. The DIC  innovation system will ideally comprise the following actors and building blocks:-

   Prime Contractor or Systems Integrator. An entity with industrial capability to deliver a complex system or product like a combat vehicle, ship or aircraft.

   Partial System Manufacturer. These manufacture independent systems which while possessing independent purpose, are relevant when integrated into a complex system e.g. an air defence missile.

   Sub-System Manufacturer.  They manufacture systems which give a capability to the complex system only when integrated with the platform e.g. propulsion system.

   Design Houses. These are knowledge based organisations (Design Authority) with unique systems engineering skills, a suite of modern  modelling& simulation processes & tools  and facilities to test & prove at sub-system level. They generally pick up sub-contracts from prime SIs.

In order to achieve the national vision of self reliance in military systems, it is important that a long term  plan is put in place. Israel and China were in near similar condition as India during the seventies, just after the Yom Kippur war. Israel was dependent mainly on western weapons and China on vintage equipment being manufactured as a sequel to technology transfers from Soviet Union. Post 1973, Israel made the shift by adopting the human capital intensive growth strategy, focussing on creating a knowledge base & innovation. The Chinese adopted the IDAR (introduce, digest, absorb &

How does India embark on its journey of AtmanirbharBharat ? A unique advantage is that the local industrial base is modern, matching global standards, is connected world widewith  availability of creative local talent. The same cannot be said for the supply chain which lacks both capability and connectivity. In defence manufacturing, the fact that the country has demonstrated capabilities to design and develop its own fighter, helicopter, tank, howitzers, frigates, submarines and aircraft carrier indicates the versatile industrial capabilities that have been created. However, this has been achieved mostly using foreign sub systems like propulsion, navigation, sensors, weapons, etc. This vital capability gap has to be plugged through an innovation system. It is time to allow private enterprises to join in not as competitors but as high impact partners to address technology gaps. If more than 50% of the sub systems for Tejas or Arjun are imported, it is time these are indigenised. The military  needs to encourage these ventures and not have a rethink after years of painstaking efforts and investments. The Technology Development Fund/IDEX initiative should provide mission oriented funding  for innovations that seek to address such capability gaps. Govt backed venture funds and recruitment of overseas talent could also be considered. DICs have to not only create world class infrastructure to attract investments but more importantly  a collaborative work culture of cooperation.

From a military operational context, it is important that the DIC innovation system focusses on System Effectiveness i.e. capability of platforms to accomplish stipulated missions. Most of the time the military has realised that foreign know- how when deployed, has thrown up technical challenges that inhibit full scale exploitation e.g. in the current deployment at LAC several  performance capability gaps would have been noticed in equipment capability. These need to be addressed on a war footing. I propose the ODEI approach as a cost effective strategy to provide the initial ballast to Make in India Onboard technology, Deploy, Evaluate and Innovate. A collaborative mindset will be essential to avoid wastages and inhibit `requirements drift` where  QRs get transformed with changes in the hierarchy. The corner stone of this strategy has to be a commitment by all stakeholders to the self reliance call by the PM and  hand holding of the industry. A large portion of Israel`s ICT achievements have been attributed to IDF`s Unit 8200 and Talpiot programme that played a key role in providing advanced training and skill development. Military institutions like MCEME, MCTE, CME, INS Shivaji could provide the critical mass needed by the industry to build  foundational know how. This is the crux of what ails the indigenous innovation system – a clinical reluctance to knowledge sharing by the military in the name of security.

Industrial clusters are geographic concentrations of interconnected companies and institutions in a particular field. It is not limited to one industry but an array of linked industries including suppliers and customers. (Michael Porter 1998). Clusters may come up due to natural advantages like low costs, pleasant climate, workforce with specific skills and historical presence of an industry e.g. Kanpur could be transformed into a special clothing , small arms and ammunition cluster due to presence of industries in this region who could act as anchor firms. However, for it to flourish, the product range has to be expanded to a wide variety of combat clothing and soldier systems. Similarly, Chennai has great potential to becoming a hub for land systems due to presence of tank factory and a host of automobile  manufacturing units in its vicinity. The Govt can accelerate the process by improving overall business environment, providing marketing services, finance, information sharing, pooling resources, collective working and more importantly attracting anchor firms.

Anchor industries are either pre- existing successful local industries or are established by the Govt to create an ecosystem in which MSMEs, start-ups and buyers gather around anchor firms to create value e.g. the Ordnance Factory at Amethi slated to manufacture AK 203 assault rifle. If properly strategized as an anchor firm it can create a small arms cluster around Lucknow -Kanpur Bundelkhand region, where not only the rifle, its components  but also associated day and night sights, ammunition, firing range equipment, simulators, can be manufactured. With a long term plan, it could become an international hub for manufacture of soldier systems and general munitions. Fig below explains how  in case of a simple product like bullet, a collaborative workshare between OF and private entities (A,B,C) can be implemented to enhance quality and efficiency. It can then be rolled forward for more complex munitions. Needless to mention the projected global demand for this ammunition is around 5-7 billion rounds annually.

With the core mission and vision of Atmanirbhar Bharat having been spelt out by the PM, it is time a roll out plan is configured at  the MOD spelling out actions with time lines. A Capability Evaluation Board could be considered to provide the  strategic direction. The following are some actions that could  help channelize efforts and resources to accelerate the setting up of DICs :-

The country`s dream  forself reliance can be brought to fruition within the Amrit Kaal i.e. next 25 years, provided it is  intelligently strategized with military taking  ownership and  MOD  driving this change with innovative policies. A collaborative approach entailing SabkaPrayas everyone`s effort can provide the critical mass to make the DICs sustainable. Two specific areas to be addressed are people`s competencies and technology gaps. Using the skills and creativity of home–grown talent, the entrepreneurialism and social networks of NRIs and a more supportive environment for research and development, it is possible to create an Indian Innovation System to fulfil the dream of every Indian – equipping the military with Proudly Made in India weapons. Time to come out from dependence on know how of others.