Enhancing Effectiveness of the Artillery: A four Gun Battery 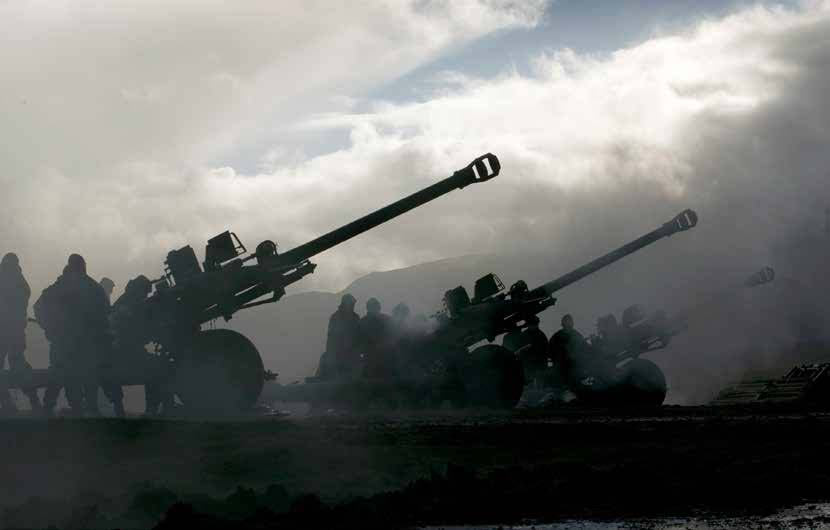 Phenomenal advancements in technology necessitate that we revisit our organisational structures, so that they are in sync with the needs of the time and become more effective. The article proposes reorganisation of the standard six gun battery to a four gun battery with judiciously scaled mix of different types of precision munitions, a high degree of automation and networked firepower

““Artillery’s appetite for ammunition has often made it the most demanding element in combat logistics, and this heavy ‘footprint’ has seemed to fit uneasily with the contemporary combat requirements for rapid deployment, employment and effect on expeditionary operations. To some, artillery has come to appear old fashioned, inappropriate to operational needs and even a liability. It is, after all, associated with heavy weights of imprecise fire against area targets, causing serious collateral damage which may even make it unusable in the ever-changing legal, political and moral context of contemporary operations” – Maj Gen Jonathan Bailey, MBE (Retd), RA

The Aim of Artillery is to create such fire supremacy over the battlefield that neither can the enemy develop his operations, nor interfere with own effectively. First Salvo Effectiveness is the ability of an opening round of engagement by artillery to cause destruction or lasting neutralisation, before the target can change its posture. The Shell is the weapon of the artillery.

The foregoing three aphorisms show that the effectiveness of artillery fire is a function of the number of shells, with highest lethality, that can be accurately and consistently delivered on the target, in the shortest time. Corollary: As lethality, accuracy and consistency increase, and the time for delivery on target decreases; the number of shells required to achieve a given effect on the target will decrease.

Owing to the advent of a variety of electronic and electrooptical sensors; operating from land, air and space based platforms, resulting in real-time day and night transparency of the battlefield, artillery headquarters at divisional and higher levels have morphed to add appendages that enable funneling of information from a plethora of sensors and facilitate their dissemination to riposte resources [not necessarily artillery] in a suitable and timely manner. However, the concepts of Command [refers to the authority over firepower] and Control [refers to the authority over guns] of artillery in vogue world-over today, especially at the regiment/battalion level, whether of direct support or reserve artillery, including MBRLs and TBMs, remain akin to what was shaped and framed in the crucibles of WW-II.

In modern, western land forces, even tactical interdiction is carried out by airborne assets, whether organic or belonging to the air force. On the contrary, in the Indian context, up to and including medium interdiction is, across all terrain and tactical situations, the mandate of field artillery. In the case of strike formations, even interdiction in depth is now within the capability and mandate of field artillery. Introduction of larger calibres, longer ranging platforms from guns & MBRLs to TBMs & LACMs, guided munitions, large variety of special warheads, higher automation from target acquisition to delivery of fire assaults and the networked firepower capability incubated by Project SHAKTI have given Indian field artillery the ability to “shape the battlefield”, in the real sense of the term. Evidently, artillery in the Indian context has a much more significant role to play in delivering firepower, when compared to contemporary professional armies in the Western world.

Intense gun densities generated during the Kargil War heralded the pre-eminence of artillery firepower in the Indian context, which was further reinforced in the Cold Start Doctrine, and consequently, firepower preponderance has become an established dogma in Indian ConOps and Doctrine. In late 2019 and early 2020, the Integrated Battle Group (IBG) concept was tested on our Western and Eastern Theatres respectively, emphasising the need for leaner, smaller, more agile, and more manoeuvrable forces. It is reliably learnt that the IBG Doctrine would be approved mutatis mutandis, adopted, and implemented in the year 2020 itself.

This article, based on the caveat that fire power assets will possess technological embellishments as outlined in the succeeding paragraph, proposes reorganisation of the basic fire unit as a four gun battery, each with judiciously scaled mix of different types of precision munitions, a high degree of automation and networked firepower delivery. The resultant is analysed under four parameters, namely, Operational Effectiveness, Logistic Footprint, Cost-to-Kill Ratio and issues of Technical Gunnery. Once defined, the same postulates can be applied, with little or no changes, to MBRLs, TBMs and LACMs.

The paradigm shift witnessed in the last three decades in technological sophistication and their application to artillery has resulted is a quantum leap in effectiveness at target end whilst significantly reducing the effort at the gun end. Some of the major advances and their respective benefits are as follows: –

(i) Hybrid navigation and pointing systems based on GNSS-cum-inertial sensors enable on demand initiation of fixation and orientation at Theatre Grid .

(iii) Lesser number of guns required to deliver the same or even higher levels of lethality.

(b) Autonomous Guns and C4I Systems.

(vii) Lesser artillery assets assert a greater level of effectiveness than ever possible before.

(i) Airburst munitions increase the effectiveness of a standard HE by 5 to 10 times as compared to a PD fuze. Universal use of Multi Option Function Artillery Fuze (MOFA) will bring economies of scale to justify across-the-board use and will greatly enhance the lethality of artillery fire.

(ii) A 1D Course Correction Fuze would double the cost of a standard shell but will reduce the radius of dispersion to about 50 metres, thus increasing the lethality by 5 to 10 times.

A four gun battery agglomerates fire power and yet reduces the logistic footprint as follows: –

(a) Shorter Gun Trains. A four gun battery further reduces the gun train by a third, yet, in terms of total weight carried, can supply four times more ammunition.

(b) Survivability. A four gun battery will: –

(i) Need lesser real estate for move and deployment and bridge space for crossing obstacles.

(ii) Have a smaller logistic footprint.

(c) Manpower. Not only is there a direct reduction of manpower in manning the assets, but also a snowballing effect on administrative echelons catering to food, repair & recovery, medical, etc.

The Army’s pension bill has already outstripped the salary bill. The defence budget of 2020-21 reveals that Rs 111,294 Crore has been allocated for Army salaries, including civilian employees, and Rs 113,278 Crore for pensions. Salaries and pensions take away 60% of the Army Budget, leaving a mere 40% for modernization. Also, in real terms, the Defence Budget is stagnant. There is therefore a pressing need to improve the ‘teeth-to-tail-ratio’ in favour of the sword arms. Introduction of modern technology is concomitant with the higher costs being at least partly offset by smaller sized force levels. It is imperative to reorganise assets and means of generating firepower in a manner to provide a catharsis to the budgetary infarction caused by large numbers of manpower and equipment. Implementation of a Four Gun Battery with autonomous guns, state-of-the-art C4I Systems with attendant sensors, optimises utilisation of the available Army Budget, without compromising on the effectiveness of firepower.

It has been conservatively estimated that implementation of a Four Gun Battery model as outlined above will reduce the global salary bill of the Army by 10 percent, and despite a 33 percent reduction in assets, the effectiveness and lethality of artillery fire will be greatly enhanced.

The proposed Four Gun Battery model does impose the need to revisit and revise certain technical gunnery procedures, like Datum Shoots, Registration of Targets, etc., these are not insurmountable issues, and solutions can be found within the existing or proposed organizational architecture.

The article flags principal and salient issues pertaining to restructuring an artillery battery to a four gun sub unit. All of these need to be identified, analysed and addressed in a larger exercise aimed at not only retaining, but also enhancing the effectiveness of artillery in the 21st Century battlefield. There is a need for validation of concepts outlined here by simulation, computer modeling and electronic war gaming, as a prelude to being tested in actual terrain, with troops and equipment, in a classical Red-V/s-Blue faceoff. This could be followed up with a live fire exercise with 2 to 3 batterys of four guns each.