Sub Title : The NE region is strategically important. Sadly, it has been marred by insurgency 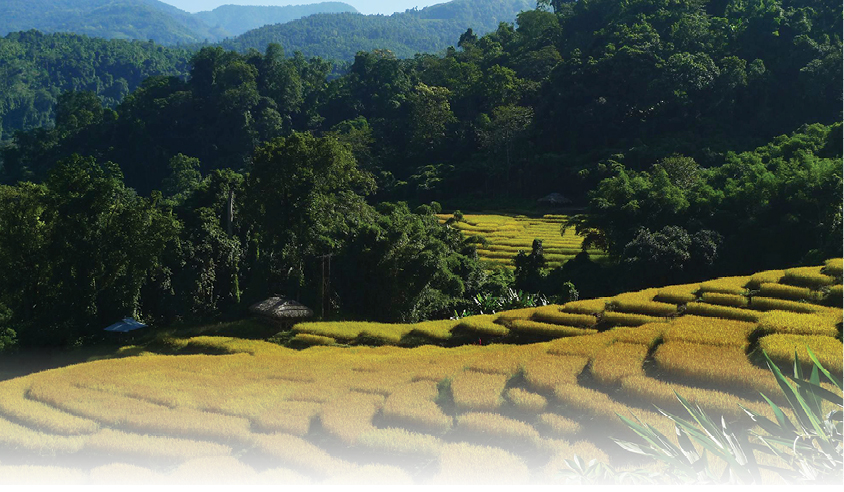 The NE region is strategically important and holds great significance for India’s ‘Act East Policy’. Sadly, it has been marred by insurgency for over six decades and has not been able to keep pace with the developments in rest of the country. To bring it at par, the insurgency must be ended

The mystical NE region comprises of the seven sister states namely Assam, Arunachal Pradesh, Nagaland, Manipur, Mizoram, Tripura and Meghalaya, having their own numinous culture and traditions, an incredibly diverse fusion of myriad ethnicities, vernaculars and ancient traditions, reflect a unique variegated mosaic in this most wonderful ecosystem of our national region. However, this region has been afflicted with the scourge of insurgency. It is the longest simmering insurgency and our nation has endured this festering syndrome with its attendant ugly dynamics, attributed to the relative remoteness of areas, proximity of international boundary, inadequate road and rail connectivity, topographical adversities in high altitude areas and lack of sea access which impinges on development activities.

The region is strategically important due to its location, energy resources, forest & herbal wealth, natural beauty and exotic proliferation of flora and fauna. The region holds great significance for India’s ‘Act East Policy’ in terms of its connectivity and infrastructural ventures with South East and East Asian nations.

♦             Arunachal Pradesh. It provides strategic depth to the Brahmaputra Valley and other NE states. It offers better lines of communication for military needs to the Tibet border as compared to Aksai­Chin. The region is rich in terms of mineral and natural resources.

♦             Assam. It provides strategic connectivity to the NE region from mainland India. Has emerged as an economic hub of the region and is central to the entire region. Fertile plains of the Brahmaputra valley are the grain houses of the entire region.

♦             Nagaland and Manipur. Emerge as the mainstay of India’s ‘Act East Policy’. Important for connectivity and economic cooperation with East and South East Asian region.

The NE region is endowed with huge untapped natural resources with tea and agricultural products being exported in large quantities. Rich deposits of mineral resources exist which include coal, petroleum crude, natural gas, limestone, uranium etc. Besides the substantial reserves of oil and natural gas in Assam, small reserves of petroleum crude are also available in the Changlong district of Arunachal Pradesh and in Baramura area in Tripura. The power-starved NE Region is blessed with a huge hydro potential. The region also has abundant resources of coal, oil and gas for thermal power generation. The NE stands to become the ‘Powerhouse’ of India by utilizing its surplus power potential, especially in the hydel power sector.

Genesis of Insurgencies in NE

The NE region has been a conflict-ridden area. Almost each small community with some noticeable cultural markers imagined or real are asking for a separate political identity and special privileges. Each insurgent movement of NE is unique in its build and origin. Notwithstanding their dissimilarity, there are certain common drivers apart from state specific issues, which are as under:

  Economic Backwardness. Entire NE suffers from economic backwardness and it is even more glaring in regions susceptible to perpetual violence. Persistent insurgency has been the basic reason for the economic stagnation of the region.

♦  Poor Governance. Except Assam, all other NE states are small and lack resources to become financially self-reliant. They are totally dependent on the central government even to run the state administrative machinery. Hence, securing maximum funds from the central government becomes the focus of the elected state governments.

  Perceived Feelings of Neglect. There is a perceived feeling of neglect amongst the population of the NE. People believe that they are and will be neglected by New Delhi due to their peripheral situation, geographical isolation and cultural differences.

  Negative Political Culture Marred with Corruption.  The political culture in most of the NE states is fraught with corruption with alleged linkages between some politicians and insurgent groups.

  Quality of Education. Despite the high literacy levels and high preliminary education standards, there are lack of institutes to pursue higher studies. The absence of higher quality education has resulted in a dearth of well qualified people to run the affairs of the state and the economy.

  Long Drawn Military Presence in the Region. The region has seen army deployment ever since 60s. The overt presence of the army has apparently fostered the idea of a militarised India amongst the population.

♦  Ethnic Fault lines. Ethnicity is one of the major causes of insurgency in NE states. The NE is territorially organised in such a manner that ethnic and cultural specificities were ignored during the process of delineation of state boundaries in the 1950s, giving rise to discontentment and assertion of identity by each group.

  Cultural Differences with Mainland India. The tribes in the NE are largely of Tibeto-Burman or Mongoloid stock with more affinity to Southeast Asia than to South Asia. They are ethnically, linguistically and culturally very distinct from the other states of India.

  Pressure on Land. Due to increasing population, lack of state land reforms, oral traditions of land ownership, jhum cultivation, migrant population, and intensive cultivation, the pressure on land for food and livelihood is on the rise. The total dependency of population on agriculture due to lack of other livelihood means has further aggravated the problem.

  Insurgent Extortion Networks. The ‘extortion’ networks run by the insurgent groups have resulted in almost every citizen having to pay some percentage of his/her income to the insurgent exchequer. A large amount of the state’s financial resources either directly or indirectly flows into the accounts of the armed groups through the extortion network. The multiplicity of armed groups makes the situation even more complex, as most of them demand separate taxes.

  Armed Violence. Violence is endemic to the NE except in states like Tripura, Meghalaya and Mizoram where it has been handled more effectively. There are number of insurgency groups operating in NE India.

  Internal Displacement. For the past several decades the NE has received a continuous flow of migrants from neighbouring countries and as a result in Tripura and Assam demographic imbalance has been tilting against indigenous population.

External Factors. The porous nature of the 4,500 km international border between India and its neighbours in this region has resulted in the easy flow of drugs, arms, illegal migrants and establishment of underground insurgent bases in neighbouring countries. The influence of the notorious ‘Golden Triangle’ (Myanmar, Laos and Thailand) and the drugs trade spilling over into NE has resulted in high drug addiction amongst the youth of the NE.

A few recommendations are enumerated in the succeeding paras, besides the ongoing endeavours by the Central Government to resolve pending issues.

♦    Structural conditions like ethnic alienation, poverty, lack of infrastructure, absence of land rights should be addressed within legal framework embodying legitimate positive solutions by involvement of the population.

♦    Processes of animated dialogue and negotiations with insurgent outfits must be conducted in a professional manner by people trained in negotiation techniques and not by generalized bureaucracy. Politico-military diplomacy by nominating composite group of experts will work better and have assured dividends.

♦    The conflicting issues between the NE states like land issues/border should be settled at the local level by the respective Chief Ministers. The Central Government should nominate icons, who are respected by the population, who epitomise peace & harmony, as their collective wisdom and positive endeavours will be productive.

♦   India must ensure that countries like Bangladesh, Bhutan and Myanmar are not used by insurgent groups as launching pads for violence in its border states.

♦   Feasibility of lifting AFSPA, from more areas ought to be critically examined. Population should be educated through rallies with simple logic and rationale and to be conducted by responsible Ministries for the purpose.

Indian Army’s Response to Insurgency. The causes for insurgency in the North Eastern States are varied and require individual attention however the main irritants are common to most of the states and can be addressed suitably by the Indian Army in synergy with the civil administration of the states : –

♦   Increased developmental expenditure and activities, creation of infrastructure resources and employment generation have often been proposed as a panacea for political violence in the Northeast. Unfortunately, massive subsidies, grants and special allocations which were supposed to propel the region into prosperity and to contain insurgency, may indeed have exacerbated the problem.

♦   Containment and regulation of migration. There have been several proposals, including the issue of identity cards and work permits, but their efficacy in stemming the tide of illegal migrants is suspect.

♦   Liberalized cross border trade. With nearly 99 per cent of its borders shared with other countries, the Northeast can be “a bridge to a most dynamic neighbourhood beyond. The meeting point of South and Southeast Asia.” Proposals for ‘opening up’ of trade with neighbouring countries, however, do not factor in the possibility of further destabilization.

♦  Restoration of alienated lands to tribal populations. Given the scale of alienation, and the entrenchment of the nontribal populations, it is not clear how practicable any efforts in this direction can be, and whether they will result in an abatement or escalation of violence.

♦  Restoration and strengthening of institutions of local self-governance, including strong village and tribal councils. This is an area of significant potential but needs to be approached with caution. Traditional structures of such local governance also carry with them the burden of traditional prejudices.

♦  Restoration of the integrity of governance, and the various institutions of civil governance, including justice administration: This is, indeed, the primary task, and pathways will have to be developed that take the region from the present state of mis governance to a restoration of the rule of law and constitutional politics.

♦  Disruption of the underground economy of terrorism. The lucrative regime of collusion between terrorists and various over ground entities, including political parties, the bureaucracy and business organizations must be challenged and dismantled.

♦  There is a need to define and implement an unambiguous Counter- terrorism policy by the GOI, that is seen clearly to punish and not reward, as is often the present case – acts of extremist violence.

♦  There must be active promotion of a ‘culture of peace’ that rejects and delegitimizes political violence to the resolution of political problems or grievances. Operation ‘Sadbhavna’, as was undertaken in correct perspective in Northern Command can be carried out for amelioration of the people of North East.

The insurgency in the region is very different from the one in other regions of our country. To evolve an effective strategy for conflict resolution, the Centre must convene a Committee under the Joint Secretary NE to make a ‘Blueprint of Growth oriented Development 2030’ with illustrative initiatives taken to resolve problems, without discrimination in each state. For all the cases that are resolved the Centre must grant additional budgetary sanctions to alleviate the conditions in that state, as incentives for futuristic development projects ensuring prosperity of its people.