Sub Title : Exicom can contribute to a great extent in providing communication solutions to integrate operations across domains 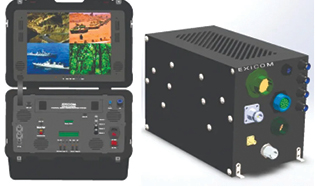 Exicom Technologies India has a history of 115 years in RF design and development. Exicom aims to help Indian Defence Modernisation by tackling one of the most critical aspects of coordination and cooperation between the three services which are communication and sharing of mission-critical information. Exicom is well-equipped to support the defence services by way of providing indigenous solutions for these basic pillars of ISR which is imperative to modern-day military operations.

Indian Air Force was established in 1932 under Colonial ruled India. 24 Indian Pilots were sent to UK in 1940 to fly for Royal Air Force. All 24 exhibited themselves with valour and courage. The performance of Royal Indian Air Force Pilots is acknowledged and documented in the war history of Great Britain. Wing Commander Karun Krishna Majumdar, Distinguished Flying Cross & Bar, who was one of the first Indian Officers to pass out of RAF Academy, Cranwell in 1932 and Squadron Leader Mohinder Singh Pujji, Distinguished Flying Cross are some of the names that are folklores of WW-II air warfare. The acts of valour continued into with the saving of Jammu and Kashmir when, in Oct 1947 1st Sikh Battalion was airlifted into Srinagar and advance of Pakistanis was halted. The military historians and strategists reflecting on 1962 Indo China War have lamented the restrictive employment of Indian Air Force in casualty evacuation and transport role. Indo Pak War of 1965 saw IAF taking on far superior F-86 Sabre jets and guaranteeing air superiority to the operations of ground forces. 1971 IAF role was fully integrated into the blitz creek and the rush to capture Dacca and liberate Bangladesh. The mosaic of Paki tank tracks trying to escape the IAF Planes strafing in Longewala is now an epic and priceless war photo. 1999 saw IAF being successfully employed in modern warfare in heights of Kargil. Operation Parakram brought about a dynamic shift in Air Operations. IAF became a decisive war winning factor in Cold Start Strategy. Air superiority is of paramount importance during the launch of land forces from barracks into the battle space. During early 21st century Air Warfare underwent a major change. Demarcation of Integrated battle theatre as Western (Rajisthan to Indira Coll) and Eastern (NEFA, Eastern Ladhak) made it imperative for integration of C4ISTAR and Multi Role Aircraft, heavy-lift transport and attack hepters into a unified Air Power. The binding fabric for this integration has to be a dynamic Next Generation Network. Air Force Network (AFNet)was a game changer and ushered in Net Centric Operations in IAF. Weaponised Drones, UAVs, AWACS, C4ISTAR brought in a new dimension into the Information Infrastructure Networks. Airborne Data networks that roll out, in matching time and space, with the aerial platforms flight plans and its progress have become an operational necessity. The concept of Drones in SWARMs and self-forming and kinetic networks, connecting all flying crafts has now become a common norm amongst all modern air powers. “Kinetic High Capacity Mesh Mobile Adhoc Network (MANET) is currently most suited for Aerial Packages”.  We introduce one such Mesh MANET that has two major advantages. First; it is Make in India and Second, this technology has been in use in modern Air Forces of the west. In Indian context, it was tested in Mehar Baba SWARM competition; when two of the successful competitors used the Exicom Mesh MANET. This is the story of High Capacity Mesh MANET that is being extensively being used modern integrated Air Operations.

In the 80s and 90s Corps of Signals was responsible for providing inter-service communications. The Air Formation Signal Units and Air Support Signal Units provided the communications connect between Indian Army and IAF. Naval docks and commands on shore were connected by the signal resources available with the sub areas. Defence Communication Network (DCN), commissioned in 2016, is the tri-service network that connects all Indian Army HQs down to Corps HQs, IAF Air Fields and Air Commands and Naval Commands. AFNet, Army Static Switched Communication Network (ASCON) & Army Data Network (ADN), Navy Enterprise Wide Network provide the service specific network in main land India. Network For Spectrum (NFS), a Next Generation Network for IA and IN akin to AFNet has been delayed by more than eight years now. Very soon, on completion, it will meet the network requirements of terrestrial network. However, there is an urgent requirement to provide a robust network in the integrated tactical battle space. The digital Ground to Air Radios (LUP Series), V/ UHF radios and point to point radio relays, Army owned Mobile Cellular Communication Systems (highly limited roll out) are outdated and restrictive in modern digital battle field. Interoperability in joint operations based upon reserve communication resources (sector Reserves) can no longer keep pace with the operational timelines in integrated battle field. The modernisation drives by all three services to be effective in a digital battle field and evolve as a Network Centric Operational force urgently requires a dynamic, versatile, reliable and Just in Time available network. To be effective in modern battle concepts of USVs (Ground/ Air/ Sea), Weaponised Drones, Autonomous Vehicles and Artificial Intelligence the attachments and detachments of war fighters must be on the fly. The network must roll-out in synch with the movement and progress of the warfighting, intelligence/ surveillance and logistic entities in battle space. World over; Software Defined Radios, Mesh MANETS, Software Defined Networks have become the buzz words. Most of the advanced and modern armies have commenced their transition into the Software Based Radio domain.

Indian Armed Forces too have realised the importance of SDR and SDNs and a humble beginning has been made with the introduction of SDR developed by Indian Navy and DRDO and produced by BEL. Unfortunately, these are still first generation SDRs and have very limited Band Widths and MANET functionalities. These MANETs also have major limitations in self-forming and self-healing capabilities when required to support entities moving at their operational speeds over ground/air/sea.

The impetus and motivation by the Service Headquarters and incentives by the Indian Government under Make in India initiative has empowered many MSMEs to innovate and manufacture in India. EXICOM Technologies (India) LLP too has a success story to narrate. Today, a high capacity (>90+ Mbps) dynamic Mesh MANET, that is supplied by only four OEMs world wide is being Made in India and fully qualifies under Make-II category. The product is even ready for Suo Moto proposal. Exicom’sDownLink and DataLinks are modern Software Based Radio solution that offers On-The-Move IP Mesh MANET Capabilities with advanced features like –

“These Radios are versatile and has wide ranging application in Military, Law Enforcement, Commercial and Broadcast and Autonomous Vehicle”

The Mesh MANET Technology is being extensively used by Western Defence Forces. Recently US Army too is considering this solution in Tactical Digital Battle Field and trial are in progress.

The various form factors of the Radios are designed to make it suitable for all aerial platforms flying at sub-sonic speeds. The ranges and capacities achieved can go upto 200 Kms and 20 Mbps in a point to point down link. The range can be extended through air to air relays (Mesh).

Full High Capacity mesh MANET makes it suitable for SWARM-ing in Air / Ground / Sea. It offers Tactical UAVs with real time feed to the troops / HQs in Tactical Battle Area. It is best suited for Command and Control as well as situational awareness and information sharing.

To support all these our product line is categorised into two main categories “Point to Point” and “IP Mesh MANET”. The design offers plug in capabilities to P2P products into the Mesh MANET.

Exicom Technologies India has entered into a Production & Technology partnership with one of the leaders in Mesh MANET equipment around the globe. The partner company is from a friendly foreign country. The partnership falls in Make in India and Make-II category of Defence Acquisition Plan 2020. We now have a state-of-the art Mesh MANET system available as manufactured in India. We are well geared up to support Integrated Digital Battle Field, robotic/ autonomous Platforms in battlespace (Ground/Air/Sea), covert operations, SWARMS, Aerial on the Move Mesh MANET.” The story is ready to unfold in partnership with the armed forces.