Facilitating IAF Capabilities for HADR Operations in the IOR

Sub Title : Measures which will enable the force to conduct such operations with even greater efficiency 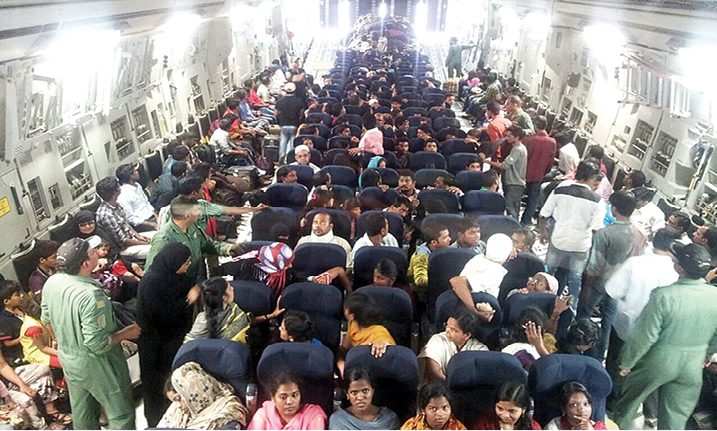 IAF has carried out Humanitarian Assistance and Disaster Relief ( HADR) in the IOR on many an occasion in the past with great success. The article  delineates problems associated with such operations  and recommends  certain measures which will  enable the force to conduct such operations with even greater efficiency, when required in the future

The Indian Ocean Region (IOR) is prone to disasters and it may be called the “World’s Hazard Belt”. Natural disasters under the group of Climatological (cyclones and droughts), Geological and Tectonic (earthquakes and tsunamis) and Hydrological (floods and tidal surges) origins are very common and  a recurring phenomenon in the region. According to the UN ESCAP, around 50% of natural disasters occurring in this region are climatogenic and seismogenic in nature.

Former Prime Minister Dr. Manmohan Singh declared that India was a ‘net security provider’ in the Indian Ocean and is committed in its efforts to improve the maritime environment. However, walking the talk and putting words into action requires political will, operational readiness, and improved capabilities.

IAF Most Suited for Quick Response

The accessibility of conducting a swift response through the air makes the IAF best suited to address certain critical situations. For example, in case of a natural disaster in any Indian Ocean Region (IOR) nation, rescue teams of Indian Army or National Disaster Relief Force (NDRF) can be dispatched quickly by IAF’s heavy-lift aircraft along with the required relief material. These aircraft can also evacuate people who are in urgent need of medical attention.

The successful evacuation of 111,711 Indian citizens from Iraq, Kuwait and Jordan in 1990 by 488 flights over a period of 59 days by Air India and IAF has been a world record. Similar missions were carried out from Lebanon in 2006 (Operation Sukoon) and in Libya in 2011. The IAF also participated in ‘Operation Rahat’ when civil war broke out in Yemen in 2015. The IAF deployed three C-17 aircraft to ferry back Indian nationals from Djibouti to Kochi and Mumbai. As many as 11 evacuation trips were undertaken that facilitated safe evacuation of 2,096 Indian nationals. All this was executed in an active war zone.

India’s vision for the Indian Ocean is encapsulated by the concept of SAGAR (Security and Growth for All in the Region). SAGAR has various distinct and inter-related elements – such as deepening economic and security cooperation in the littorals, enhancing capacities to safeguard land and maritime territories, working towards sustainable regional development, Blue Economy, and promoting collective action to deal with non-traditional threats like natural disasters, piracy, terrorism etc.

IAF and Indian Navy will need to work in coordination with each other to ensure quick relief by air and later use Naval ships for the next phase. The Sendai motto of “Build Back Better” in recovery, rehabilitation and reconstruction can be achieved when Air Force and the Navy lend their dedicated support for operations.

Developing an effective response mechanism to address humanitarian crisis and natural disasters is one of the most visible elements in India’s evolving Indian Ocean Region strategy. Without distinguishing between natural or man-made disasters, the Indian Air Force and Indian Navy both have time and again demonstrated that India cares for and stands by its IOR partners in times of need and has incorporated HADR operations as one of the foremost elements in its vision.

The 1994 Oslo guidelines on “The Use of Foreign Military and Civil Defence Assets in Disaster Relief” state that “humanitarian assistance must be provided with the core principles of humanity, impartiality and neutrality and must also fully respect the sovereignty of states.” Western and Asian countries differ in their approaches to providing aid during HADR operations. For Western nations, providing or receiving relief in the aftermath of a humanitarian crisis does not pose a threat to their national sovereignty, as they are economically strong, to begin with. Asian countries are more cautious and protective about their sovereignty and may be reluctant in engaging in such HADR operations where there is a possibility of violation of their own or another country’s sovereignty.

It is important to study how the United Nations’ Sendai Framework may be effective in institutionalising collaborative HADR arrangement in the IOR both at the micro and macro levels. The Sendai Framework for Disaster Risk Reduction, 2015–30 propagates an institutional approach to disaster mitigation and includes these goals:

Based on the same framework countries in the IOR can plan for disaster risk reduction (DRR):

Humanitarian Operations (HUMOPS) are covered in Ch IV Sec 6 of IAF’s Operations Doctrine as per which IAF is expected to respond to humanitarian aid within and abroad in the event of disasters. Humanitarian intervention may be necessary in a foreign country to control violence and promote peace on behalf of govt of the country. Although, using the military for such operations is in contravention to the sovereignty aspect as mentioned in Oslo guidelines but most of the times the place of occurrence is remote and inhospitable and onset is quick and unexpected. In such critical scenario IAF’s ability to use its Air Mobility expertise to provide support for relief operations has been proven time and again.

One must not forget that the primary role of the Indian defence forces is to safeguard the nation’s sovereignty from external threats, but when called upon, they are equally proficient in performing HADR operations.

The role of the IAF has been distinctive in all kinds of operations because of its efficiency to respond fast along with its inherent characteristics of range, mobility and flexibility. Other than countless rescue missions within the country, many nations have benefitted from the Humanitarian Assistance and Disaster Relief (HADR) and Civilian evacuation from combat zone mission capabilities of the IAF. Capabilities of IAF aircraft are given in the table below.

Go ahead is given by the National Crisis Management Committee which identifies the lead service depending on the nature of the calamity and location of the affected area. Foreign HADR missions are sponsored by MEA and based on the political situation they decide whether military operations are required or civilian aircraft can be used. In some scenarios like Yemen Crisis only military operations are possible. Such missions can be Unilateral, Multinational or UN supported Missions. Decision on the size and quantity of aid is very difficult. There is a very thin line between sufficient aid and over commitment. The international community keeps a close watch on such missions and at times too much involvement is seen as threat to sovereignty of the affected nation. Indian ambassadors have got a big role in these processes and they need to coordinate inter agency issues.

The HADR missions are carried out in uncertain and at times hostile environment. These involve different types of authorities as well as different set of problems for all the operators. Although all the problems can’t be foreseen or listed but the major issues which have been faced by HADR operators are: