Sub Title : India’s vision of the Indo-Pacific and the maritime security aspects of the policy 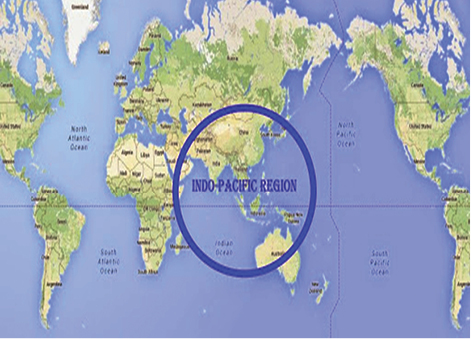 The recent decade has been testimony to many national, regional and multilateral geo-strategies with an aim of operationalising the new geopolitical reality of the Indo-Pacific. The exact geographic expanse of the Indo-Pacific may be an idea in transition but more and more countries are coming forth with their policy guidelines to shape their stakes in this vast and emerging region, lest it is too late. Recently, the German Federal Foreign Office declared its Policy Guidelines for the Indo-Pacific and joined India, USA, Australia, Japan, UK, France and ASEAN in defining her interest in the region. The Netherlands also released a vision document on the Indo-Pacific and the European Union’s strategy is expected to be around the corner. Closer home, another recent development with a direct bearing on the region is the promulgation of the trilateral of India-France and Australia, which had its first Senior Officials’ Trilateral Dialogue on September 09, 2020.

In the light of these fledgling developments, this article seeks to dwell on India’s Indo-Pacific Oceans’ Initiative, the country’s flagship policy for engaging with the region.

Prime Minister Narendra Modi launched India’s Indo-Pacific Ocean’s Initiative (IPOI) at the East Asia Summit 2019 held in Bangkok, Thailand. Subsequently the Ministry of External Affairs described it as an open global initiative. The open and global aspect is in tandem with India’s vision of the Indo-Pacific as a free open and inclusive space where stakeholders shall adhere to international rules and laws. Apart from being an open and global initiative it stresses on incorporating existing regional cooperation and security architecture and mechanisms hinting subtly at continuity rather than a sea change in approach.

The IPOI is conceived of seven central pillars of Maritime Security; Maritime Ecology; Maritime Resources; Capacity Building and Resource Sharing; Disaster Risk Reduction and Management; Science, Technology and Academic Cooperation and Trade Connectivity and Maritime Transport. However, it is ought to be underscored that the pillar-ed approach tends to be somewhat constrictive and runs the risk of each facet being silo-ed from the other. Thus it is suggested that “spokes” would be more apt a terminology to designate these facets. The  heptagon in Figure 1 represents this vision.

Maritime Security in the Indo-Pacific

Clarity in the Indo-Pacific region is beset with ambiguity. This is so because this new geopolitical space is still evolving and finding newer meaning with each policy enunciation and relevant declarations as well as engagements by the stakeholders involved. As mentioned earlier, more and more policy interactions in this geographic space have rendered some definition to this new geographic reality; however there is still a lot of ambiguity. For instance even Quad countries (alternatively termed as Free and Open Indo Pacific or FOIP Club) are not currently unanimous on their view of what constitutes the geographical limits of the Indo-Pacific. This is in addition to their varied notion of priority theatres in the region, like for India it is the Indian Ocean which is her primary ocean of interest and for Australia it is the South Pacific that holds pre-eminence. Thus stressing on exactitudes will lead to nowhere. However, it is in India’s interests to understand what constitutes its corresponding partner’s Indo-Pacific definition to better design bilateral or multilateral partnerships/ policies. To put it simply, it takes two to tango!

Differences abound, but some intrinsic commonalities do exist. First, there is no conception of Indo-Pacific without India. Also, the maritime domain does find itself at the heart of the concept. Additionally, there is unanimity on respecting ASEAN and ASEAN led mechanism’s centrality even more so after ASEAN’s own assertion of the same in the ASEAN’s Indo-Pacific Outlook.

Against this backdrop, what could be the broad contours of the maritime security in the region? Christian Beuger’s Maritime Security Matrix (Figure 2) is a good model to understand the interconnectedness and multifaceted nature of the concept. Without going into the quintessence of traditionalist v/s contemporary understanding of the concepts of national security and sea power, but one can agree that both are sine qua non for the nations while formulating both their inward and outward maritime security strategies. Hence, before fleshing out the maritime security facet of the IPOI, it merits to look into the principle drivers that underpin India’s maritime security.

In India’s context, her conception of maritime security is a derivative of Prime Minister’s vision of SAGAR: Security and growth for all in the region (specifically the Indian Ocean region) which is based on India’s cosmopolitan view of universal brotherhood or VasudhaivKutumbakam. The peace in this ocean is susceptible to disruption by various traditional and non-traditional threats, which then have the spiralling or butterfly effect on India as well as the Indian Ocean littoral countries’ economic stability. Piracy, drug trafficking, IUU fishing (as also highlighted by the US Coast Guards IUU Strategic outlook report) including maritime terrorism is highly prevalent in both Eastern and Western Indian Ocean. The COVID pandemic has only exacerbated the occurrence and frequency of these blue crimes. Next is the concern or threat to the ISLs and maritime choke points in the Indian Ocean, the sustenance of which is critical to the overall economic wellbeing of the subcontinent.

Closer to land, India’s most critical maritime interest include the preservation of her expansive maritime territory: both coastal and offshore, including a coastline of 7517 kms, about 1200 islands, an expansive territorial sea of 193,834 sq.km and an Exclusive Economic Zone (EEZ) of 2.02 million sq.km. This maritime territory is also the basis of our maritime economy and related infrastructure, including the 12 major ports and more than 200 non-major ports. Central’s government’s core scheme of Sagarmala envisions a port led coastal development through port modernisation, port connectivity, port led industrialisation and coastal community development through a handful of economic measures like creation of coastal economic zones and maritime clusters, including maritime infrastructures such as  multi modal logistic and tourists transport facilities, inland waterways amongst others. These, put together, form the country’s vital maritime interest.

Apart from the above mentioned drivers, the last and the most peculiar threat is the increased Chinese presence in India’s vicinity. China’s continued emphasis on the creation of regional maritime infrastructure surrounding the Indian peninsula, alternatively termed as The String of Pearls, leading to the establishment of the first overseas base in Djibouti in 2017, initiating counter piracy operations which included submarine patrols, increasing number of research vessels conducting out of area operations, growing Chinese defence diplomacy with the region via sale of military platforms and initiating joint military training with the partner countries, the list is growing. In addition to Indian Ocean and South China Sea, Chinese manoeuvres in the South Pacific Island nations are a stark repeat of the cheque book diplomacy with the Indian littorals. In a bid to strengthen presence outside the South China Sea, China is increasing her presence in these small island nations by engaging in construction of dual use port facilities by either upgrading existing facilities, such as in Vanuatu, or by creating new infrastructure, like in Kiribati.

As is the nature of any maritime threats, these challenges, although classified under India’s maritime interests, are in fact common to the entire region.

Maritime security in the IPOI

In this backdrop, the maritime security facet of the IPOI should be envisaged as a three pronged approach. First and foremost, the existing multilateral architecture in the region, including both the ASEAN led mechanisms such as the East Asia Summit (EAS), ASEAN Defence Ministers Meeting Plus (ADMM Plus), ASEAN Regional Forum (ARF), Expanded ASEAN Maritime Forum or otherwise, should be actively engaged with. The EAS, ARF and ADMM plus have an active maritime security component fostering dialogue at various levels.  Table 1 depicts the engagement of some important Indo-Pacific stakeholders with those ASEAN led multilateral mechanisms which find mention in APOI.

Going forward, there will be an effort by the Asian and non-Asian Indo-Pacific stakeholders to try and grab a seat at the ASEAN high table. For instance: France has applied to join ADMM plus, UK is seeking a dialogue partner status with ASEAN after Brexit and ASEAN-Canada have concluded exploratory discussions for FTA. In addition to the ASEAN led organisations, Indian Ocean Rim Association (IORA) and the Indian Ocean Naval Symposium (IONS) in fact can be the bridge between countries of the region, both small and middle powers, for developing a maritime security agenda.

Secondly, through engagement in mini-laterals or tri-laterals that call for collaborations and partnerships on issues specific to maritime security. The region is witnessing a growth of these issue based tri-laterals, the latest being the trilateral of India, France and Australia which specifically talk about cooperation on matters of global maritime commons. In the same vein, India has shed reluctance and activated the Quad 2.0 and subsequently Australia has joined for war-games in the Malabar 2020. Going forward, the largely dormant trilateral maritime security agreement between Maldives Sri Lanka and India can be considered to be activated.

Third is via direct bilateral engagements though defence diplomacy. In this regard, India has stepped up many folds, its engagements with likeminded partner countries in the Indo-Pacific including with the stakeholders of the South China Sea dispute. The strongest example in this regard is the evolution of the Global Strategic Comprehensive Partnership between Delhi and Washington DC. The signing of the foundational agreements in the recently held 2 plus 2 Dialogue, along with the Information exchange annexe and white shipping information agreement does attest to this very fact.

In the Western Indian Ocean, India has signed logistics support and access agreements with France enabling access to Reunion and has signed Memorandum of Understanding (MoU) with Oman for making available the services of Duqm port and dry dock for Indian military vessels. In eastern Indian Ocean and further into the Pacific, India has similar agreements with Singapore (Arrangement concerning mutual coordination, logistics and services support), Republic of Korea (Agreement to extend logistical support), Australia (Mutual Logistics Support Agreement (MLSA) and Japan (Acquisition and Cross-Servicing Agreement).

Enhancing Maritime Domain Awareness (MDA) in the region is something that both Indian navy and defence policy makers are looking at seriously as a part of her maritime security strategy in the Indo-Pacific. In the Eastern Indian Ocean, two principal agencies are IFC Singapore and International Maritime Bureau – Piracy Reporting Centre (IMB PRC) in Kuala Lampur, Malaysia whereas Regional Cooperation Agreement on Combating Piracy and Armed Robbery (ReCAPP) launched in 2006 is the first regional government-to-government agreement to promote and enhance cooperation against piracy and armed robbery against ships in Asia. Partnerships with the newly launched Maritime Information Centre of Indonesia (IMIC) and IMB PRC, Malaysia should definitely be on the cards. Closer home, India is helping enhance Maritime Domain Awareness (MDA) in the region by extending the Coastal Surveillance Radar System (CSRS) which currently covers Bangladesh, Maldives, Sri Lanka, Mauritius and Seychelles and more recently, has been extended to Myanmar and Thailand.

In the Western Indian Ocean, India has recently signed the Djibouti code of conduct Jeddah amendment. This comes along with an increasing number of Maritime Cooperation agreements and White Shipping Exchange agreements being signed. The latest count is 17 countries and 1 multi-national construct, linking the IFC-IOR to the T-RMN under Virtual Regional Maritime Traffic Centre (VRMTC).

Indian Navy is at fore front in realising India’s Indo-Pacific vision by holding bilateral Maritime Security Dialogues with partner countries, through forward presence, mission based deployments and as a first responder offering Humanitarian Assistance and Disaster Relief (HADR). Through Naval diplomacy it is ensuring both hard security and is enhancing India’s soft power. With the three pronged approach, India’s IPOI and the military security collaborations within it, stand to benefit the entire region and help in establishing a rules based order and ensuring a free and open Indo-Pacific region.