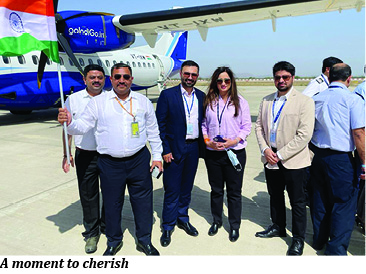 On 28 Apr 22, Indigo became the first airline in the country to land an aircraft – an ATR72 – at Kishangarh airport in Rajasthan using the indigenous navigation system GAGAN to fly an LPV approach. In simple terms, LPV is ‘Localizer Performance with Vertical Guidance’. With regard to its capability, LPV thus becomes quite similar to the basic ground-based Instrument Landing System (ILS), except that it is not dependent on any fixed land system on the runway.

It is GAGAN – GPS Aided Geo Augmented Navigation – India’s very own Satellite Based Augmentation System (SBAS) for its airspace that makes air navigation and such approaches possible, providing both lateral and vertical guidance when an aircraft is approaching a runway for landing.

The LPV, although distinct from a precision or a non-precision approach, is precise because the deviation indicator needle in the cockpit becomes more sensitive the closer you get to the runway. In its segment, the LPV will allow the lowest minimums above the ground – close to 200 feet – and it also comes with a Decision Altitude and not a Minimum Descent Altitude, proximating it to a Category I ILS performance.

This test flight at Kishangarh was a part of the approval process with the Directorate General of Civil Aviation (DGCA), India’s Aviation Regulator. The approval includes the whole gamut of pilot training, validation of the approach, and simulator sessions amongst others.

GAGAN has been developed jointly by the Indian Space Research Organization (ISRO) and Airports Authority of India (AAI), its payload being operational through GSAT-8, GSAT-10 and GSAT-15 satellites. Comprising of three segments – space segment (GEO and GPS), ground segment (15 Indian reference stations (INRES), 3 master control centers and 3 ground uplink stations) and the user segment, the objective of GAGAN to establish, deploy and certify satellite based augmentation system for safety-of-life civil aviation applications in India has been successfully completed. The system is inter-operable with other international SBAS systems like US-WAAS, European EGNOS, and Japanese MSAS etc.

GAGAN is the first SBAS system in the world to serve the difficult equatorial region. Development of a region-specific ionosphere model is the key element in providing precision approach services for civil aviation.  Ionosphere being largest source of error is of prime concern for a SBAS. India is a low latitude country, posing challenges for grid based ionosphere algorithm development; challenges such as large spatial and temporal gradients, equatorial anomaly, depletions (bubbles) and scintillations etc. To meet the required GAGAN performance, it was necessary to develop and implement a best suitable ionosphere model, applicable for the Indian region as thin shell models like planar do not meet the requirement. ISRO GIVE Model – Multi Layer Data Fusion (IGM-MLDF), now a part of GAGAN, employs an innovative approach for computing the ionosphere corrections and confidences at pre-defined grid points at 250 Km and 450 Km shell heights, making it suitable for equatorial latitudes. GAGAN GEO footprint extends from Africa to Australia and has expansion capability for seamless navigation services across the region.

India is the fourth country in the world, after USA, Europe and JAPAN, to take up the challenge of establishing the regional SBAS that will redefine navigation over India and adjacent regions. It also provides the additional accuracy, availability, and integrity necessary for all phases of flight, from enroute through approach for all qualified airports within the GAGAN service volume. As per Sh. Ravinder Jamwal, Director ANS at DGCA, the increased accuracy in position reporting will also lead to more uniform and high-quality Air Traffic Management (ATM). In addition, GAGAN will provide benefits beyond aviation to all modes of transportation, including maritime, highways, railways and other services such as defense, security agencies, telecom industry and personal users of position location applications. It is also the first system in the world that is certified to serve the equatorial anomaly region. The DGCA have issued a mandate for all aircrafts being registered in India after July 1, 2021 to be fitted with GAGAN equipment.

Airlines are happy that LPV capability provides the airline operators a precise and near-precision instrument approach option with the lowest minima relative to other approach options, when ILS is either not installed or unavailable, especially in case of regional connectivity scheme (RCS) airports.

“This is a huge leap for Indian Civil Aviation and a firm step towards “Aatmanirbhar Bharat”, as India becomes the third country in the world to have their own SBAS system after USA and Japan,” says Ronojoy Dutta, whole time Director and CEO of Indigo airlines. GAGAN will be a game-changer for civil aviation, leading to modernisation of the airspace, reducing flight delays, bringing in fuel savings, and improving flight safety.

Under UDAN (Uday Desh Ka AamNagrik) Regional Connectivity Scheme, a lot of regional airports are being developed by Government of India, with the objective of making air travel affordable and to provide widespread connectivity. Normally these airports are limited to little ground based navigation infrastructure. Installing and maintaining an Instrument ILS, which is available at all big airports, will increase the costs of operation. A more cost-effective solution is to develop and implement GAGAN based LPV approaches at such airports.

Design and approval of LPV Instrument Flight Procedure (IFP) is a complex process. “I felt honored being part of a technological breakthrough, witnessing an Indian aircraft  carrying out a precise SBAS approach to land, and that too at an airport not served by any precision approach or ground navigational aid infrastructure,” says Mr Gaurav Raghuvanshi, AGM, AAI who designed the LPV approach for Kishangarh. Approximately 66 LPV approaches are planned by AAI, which are in various phases of implementation. This eminently supports the idea of UDAN – to make air transportation available to an average citizen. GAGAN does that by eliminating the cost of an ILS which includes equipment, calibration, maintenance, CNS personnel ILS training /rating allowance costs, cost of land required for installation of ILS. Furthermore, ILS also imposes restrictions in the development of airport infrastructure.

Implementation of LPV approaches in India was a challenging task. Though GAGAN was certified in 2015, it could not be utilized due non-availability of IFPs, lack of flight validation infrastructure and fleet/crew capability issues. The most challenging parts in LPV implementation were the flight validation of IFP and OPS approval. Certified simulators capable of conducting LPV approaches were not available in India and fleet/crew were also not approved for conducting such approaches.

However, with active participation and concerted efforts of all the stakeholders – DGCA, AAI and the partner airline – successful simulator trials of LPV approaches for runway 05 and runway 23 of Kishangarh airport were carried out on 23 Apr 2022 by Indigo airlines at FSTC Hyderabad ATR 72/600 simulator. This was followed by actual flight trials of the LPV approach. The pilot community is reported to be very happy. The DGCA plan to promulgate LPV approaches of Kishangarh as early as Jun, 2022. In the words of ShJamwal, DGCA, “Successful flight trials of first SBAS approach in Asia-Pacific region is akin to turning a dream into reality through concerted team work. Besides the sense of satisfaction and accomplishment, it is a giant leap towards technological independence of India.”