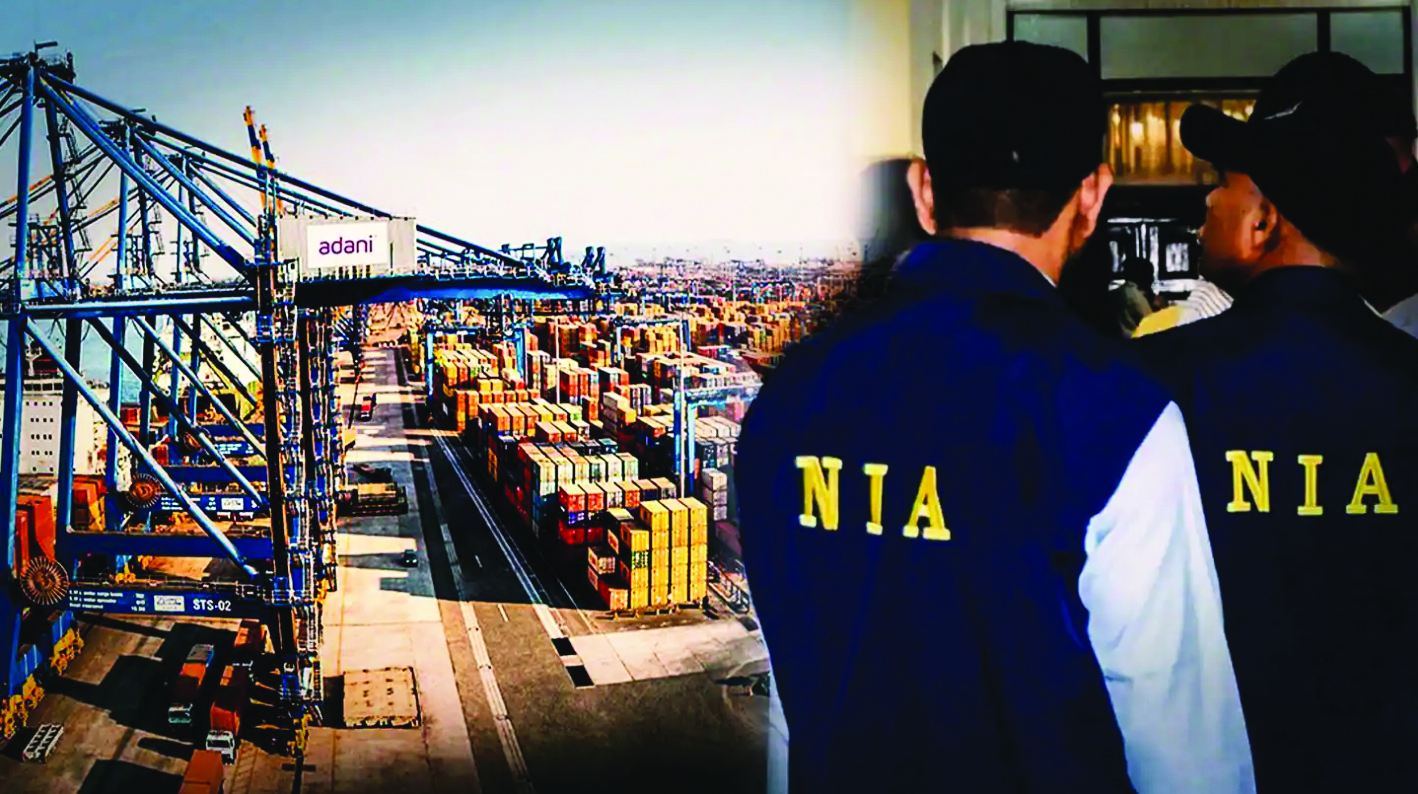 The North Arabian Sea is an ideal playground for drug running and arms smuggling, and the Gujarat coast lends itself as a perfect destination for such consignments. Accordingly, the Gujarat Marine Police needs to be prepared to meet these challenges by developing robust coastal security

The North Arabian Sea Crescent (NASC) stretching from the Makran Coast (coastal Baluchistan) to the Red Sea through the Persian Gulf and the Gulf of Aden continues to witness turbulence at two different levels. First, there is near continuous naval tension in the region marked by aggressive posturing by the US Navy and Iran’s Islamic Revolution Guards Corps (IRGC) responding by conducting “high speed boat swarm manoeuvers’. Simultaneously, there are efforts to restore the 2015 Joint Comprehensive Plan of Action (JCPOA), or the Iran nuclear deal, which is currently in a flux, notwithstanding President Joe Biden Administration adopting a conciliatory approach towards Iran since March 2021. There are now good indicators of US engagement and Iran’s willingness to “ensure the full and effective implementation of the agreement [JCPOA] by all sides,”

Second, during the last two years, several vessels carrying guns and narcotics have been successfully intercepted in the north Arabian Sea by the Combined Maritime Forces (CMF), a 33-nation maritime partnership that operates in the northern Indian Ocean. The CMF aims to enforce International Rules Based Order (IRBO) by countering illicit non-state actors on the high seas and promoting security, stability and prosperity. The estimated value of various kinds of illegal drugs seized between October 2020 and March 2021 has been $30 million.

In October 2021, the French frigate FS Languedoc, operating in support of the CMF seized more than 3.6 tonnes of illegal drugs from a dhow during an operation on the Indian Ocean. Towards the end of the year in December 2021, the US Navy intercepted a dhow in northern reaches of the Arabian Sea off Oman and Pakistan and confiscated 1,400 Kalashnikov-style rifles and 226,600 rounds of ammunition. The interrogation of the five Yemeni crew members revealed that the consignment was bound for Houthi groups who are fighting the SaudiUAE coalition. Two years ago, the US Navy seized a huge cache of weapons (171 surface-to-air missiles and eight anti-tank missiles) from two vessels in the Arabian Sea during maritime security operations.

While majority of the illegal weapons consignments were bound westward for Yemen, there were several interceptions of drug shipments that were east-southward bound towards India. On 15 October 2021, following a tip off that drugs are being smuggled in via the sea route, the Maldivian Police confiscated 215 kilos of heroin. The Maldives Commissioner of Police thanked the National Defense Force and the Indian Government for their helpful input in the operation. In December 2021, a joint operation by the Indian Coast Guard and the Gujarat Anti-Terrorist Squad (ATS) led to the interception of a Pakistani fishing boat while trying to establish contact using code words, ‘Hari-1’ and ‘Hari-2’ on VHF radio channel, for the delivery of the drugs. The vessel ‘Al Huseini’ was carrying 77 kilograms of heroin valued at about Rupees 400 crore and was intercepted around 35 nautical miles off the Jakhau coast off Kutch in Gujarat. The interrogation of the six crew members revealed that the drug consignment was supplied by Pakistani smugglers Haji Hasan and Haji Hasam. The shipment was loaded from a fibre boat at a distance of six nautical miles from Karachi.

In September 2021, the Indian Directorate of Revenue Intelligence (DRI) intercepted the largest consignment of nearly 3,000 kilograms of heroin from two containers that had originated in Afghanistan and were shipped from Bandar Abbas Port in Iran to Mundra Port. The DRI had earlier seized two large consignments of heroin from Nhava Sheva port i.e. over 200 kilogram in 2020 and 93 kilogram in July 2021.

The nexus between small arms transporters and drug smugglers is well established. The porous land border with Afghanistan and weak coastal security in Pakistan offers an easy outflow of drugs and weapons. Similarly, the easy availability of drugs in East Africa appears to have encouraged Al Shabaab which is most active in Somalia, to have links with drug cartels and the drug business helps the organization to acquire weapons and other logistics. It has been noted that although Taliban has announced its plans to rid Afghanistan of drugs, but “implementing and maintaining any kind of poppy ban will be wickedly difficult for the Taliban…Poppy is deeply entwined in the socio-economic fabric of the country, and hence, inescapably, in its political arrangements and power relations”.

Another important facet of the drug-weapon smuggling network is the role of the dhows that routinely carry such consignments. For centuries, dhows have been the backbone of a thriving cargo trade in North Arabian Sea Crescent routes. These boats are built in India, Iran, Oman and the United Arab Emirates (UAE). The dhows in India are built in Gujarat and Kerala. Those built in Gujarat are towed to the Gulf countries for fitting of machinery, particularly engines and other navigation equipment. Baypore in Kerala is home to the art of Uru making, a wooden dhow that was part of the trading network with Mesopotamia. The dhow trade is also popular along the Malabar Coast and these vessels call at small ports in Maharashtra, Goa, Karnataka and Kerala.

Notwithstanding the successes enumerated above, high level of coastal policing of the Gujarat coast is becoming crucial. In October 2021, the Consultative Committee of the Ministry of Home Affairs reviewed various issues concerning coastal security. The deliberations also included a detailed presentation by the department of border management in the Ministry of Home Affairs (MHA) on the steps taken to further strengthen coastal security and commencement of the third phase of Coastal Security was discussed. Home Minister Amit Shah’s tweet also stated “we are striving to make coastal security impenetrable using technology and by coordinating with all the states and the other stakeholders,”

Earlier, Harsh Sanghvi, Gujarat Minister of State (Home) had alluded to the weakness in material and manpower state of the Gujarat police and noted with concern the state of coastal security in the light of the seizure of heroin from Mundra port. Sanghvi called for “further strengthening” coastal security by “immediately addressing issues like manpower allocation, training, providing new boats with modern security systems and other infrastructure to enhance coastal security.”

It is worth mentioning that acquisition of modern boats for coastal policing and building associated infrastructure involves several policy decisions and connected procedures such as tenders, selection process, allocation of funds, etc. These are inherently long drawn and entail high maturation period notwithstanding that small boats are least-expensive vessels.

It is also important to mention that coastal policing is much different from the activities undertaken by the Indian Navy and the Coast Guard. The Indian Navy is designed for combat operations at sea and patrols along International Maritime Boundary Line (IMBL); and the Indian Coast Guard is mandated to carry out patrolling and surveillance up 200 nautical miles from the shore in the Exclusive Economic Zone of India.

Unlike the Indian Navy and the Coast Guard, the State Marine Police conducts patrolling in the shallow waters along the coast which require different types of boats and skill sets for its personnel. Consequently, its training requirements are different and therefore merit a detailed examination and overhaul of the existing processes. The training could be at three levels.

First, at the functional-operational levels. The boat crew would require classroom training and/or boating experience, or a combination of both. It entails improvement of their nautical knowledge particularly about seamanship and navigation. These personnel would also need practical training in close to shore shallow water operations. They should be proficient in handing the vessel/craft in sea and wind conditions that affect the safety and mission effectiveness as also local knowledge of the area is extremely important.

They should also be able to operate from other minor ports and landing sites where outside assistance may be many days away. It is useful to keep in mind that such small patrol vessels have the worst habitability and this would have to be kept in mind while deployment from remote sites. Another important proficiency requirement is their ability to operate various communications equipment and familiarization with procedures.

Second, is about training of mid-level officers in planning and executing tactical operations. They would be required to acquire knowledge to meticulously plan and safely execute patrol craft operations in a variety of situations such as counter-narcotic/counter-terrorism operations, and waterborne operations in the river/creeks/ waterfronts. Interoperability with the Indian Navy and the Indian Coast Guard will be an important issue for their consideration.

The third level involves familiarizing senior officials of the State Marine Police of the strategic environment, national policies and plans including force development and regional and global trends in marine police operations.

Finally, it merits consideration that the Gujarat Marine Police reinvigorate to meet the ever changing maritime security requirements by providing high-quality training at different levels to develop robust coastal security