Have the Pakistan Tanzeems become too hot to handle ?

Sub Title : Pakistani Tanzeems have grown from strength to strength over the years. Bringing them to book is easier said than done 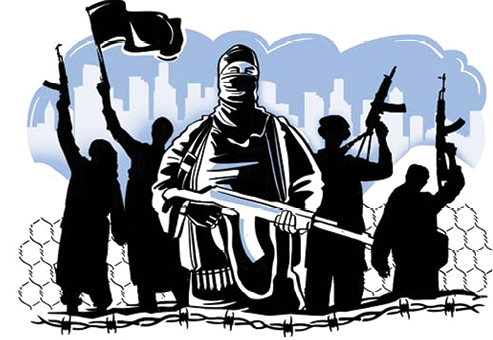 Pakistani Tanzeems have grown from strength to strength over the years. Bringing them to book is easier said than done as machinations by political parties, the military and the ISI have only bolstered their hard core strength.

The Pakistani Army (even if ordered to) would be reluctant to act against Tanzeem members, as they have done in Balochistan or in Khyber Pakhtunkhwa, because most of the Army as well as Tanzeem members are of same Punjabi stock

That would appear to be the case because attempts to bring them under control have been taking place at least from the beginning of this century if not earlier. General Pervez Musharraf who took over Pakistan in a coup against Prime Minister Nawaz Sharif used the full force of all the entities of the state that he controlled to put an end to them for once and all. At that time as well fearing an attack from India after the attack on the Indian Parliament following other outrages the pressure to come down hard on the tanzeems came from the US and its allies to the extent that the general had no choice but to capitulate. He was afraid of more dire consequence were he not to conform. In a presentation made at ICRIER on 8 August 2009 on “Reappraising Indo-Pakistan Relations” the author referring to the tanzeems stated inter alia: “Their hard core strength has grown formidable. They have the capacity to paralyse the functioning of any government, civilian or military through street power should their future be seriously threatened. Their Friday collections are impressive. The external funding that comes their way has given them enormous economic clout. Attempts to declare them terrorist outfits or to seize their bank accounts are met with derisive scorn. Nevertheless, the masquerade goes on from time to time to placate the Americans or the Government of India whenever they suspend talks for any length of time or threaten stronger action. Were sufficient pressure to be put, Pakistan may show its willingness to prosecute these groups. However, sympathies for them run deep in Pakistan, raising a serious challenge to any

long-lasting moves to dismantle the network. Knowledgeable people believe that together they could make Pakistan “go up in flames.” Unquote.

Usama Ahmed ,former employee of the Government of Pakistan in his piece Will Pakistan exist within the next 20 years? Today’s conditions don’t show very much promise” (20 May 2018) has stated, inter alia, “On the other hand we have the disintegration of major national parties like the PML-N and PPP and growing regionalism in the state. We are reaching catastrophic debt levels; currency failures and economic growth is slowing down. Climate change is reducing fertile land and water and population growth shows no sign of slowing down. Economic and regional inequalities have given fresh lease of life to ethnic nationalist movements and the grim failure of the state to cater to the suffering of its frontiers have meant a rise in movements like the Pashtun Tahafuz Movement. Extreme far right politics like the Khatam-e-Nabuwat coalitions look set to enter mainstream politics on the back of their supporters in the establishment who find them useful idiots to use against the civilian democrats they can’t control”. And again “Some would say the original Pakistan died somewhere in the blood-stained corridors of Dhaka university when our army turned its guns on its own citizens in one of the most shocking moments of our past. Others would say Pakistan died in the whip cracks and screams of journalists flogged in public during the Zia years as authoritarianism and Islamism combined to forever transform Pakistani society as we know it. Still others would say Pakistan died in the trinity of nuclear tests, 9/11 and Kargil”. Unquote

General Pervez Musharraf  first banned several militant groups in January 2002 under intense pressure from India which had mobilized for war after the attack on the Indian Parliament by Lashkar-e-Taiba (LeT) and Jaishe-e Mohammed (JeM) on 13 December 2001. He again banned the militant groups in 2003. He, however, left an escape clause for himself and them, giving the example of the Prophet who had to flee from Mecca to Medina in AD 622. The General said that it was a tactical retreat, the implication being clear. The tanzeems, still turned against him and made several attempts on his life. The siege on Lal Masjid in Islamabad from 3 to 11 July 2007 resulted in 154 deaths and the capture of 50 militants, although estimates were higher. Ten years later well after the General was obliged to flee the country a news item in practically all the leading dailies in the country on 6 December 2017 showed a picture of Gen. Pervez Musharraf with Hafez Saeed the head of Lashkar–e Taiba. Gen. Musharraf was quoted as saying that he was one of the foremost admirers of LeT and would be happy to form a political alliance with Saeed Hafeez (something that Pakistan Army-ISI combine seem to be promoting assiduously).

In this regard the excerpt on LeT from Andrew Gavin Marshall’s ‘Creating an “Arc of Crisis”: The Destabilization of the Middle East and Central Asia’ (December 7, 2008) is worth noting: “It is important to identify what the LeT is and how it has operated historically. The group operates out of the disputed territories between India and Pakistan, Jammu and Kashmir. It has close ties with the Pakistani ISI and is largely known for its use of suicide attacks. However, aside from its links to the ISI, it is also closely allied with the Taliban and Al-Qaeda. The LeT is even referred to as the most visible manifestation of Al-Qaeda in India. It has branches across much of India, Pakistan, and in Saudi Arabia, Bangladesh, South East Asia, and the United Kingdom. It primarily gets its funding from Pakistani businessmen, the ISI and Saudi Arabia. The LeT also took part in the Bosnian campaign against the Serbs in the 1990s. The LeT has not operated independently of Pakistani influence and finances. Its close relationship with the ISI must be viewed in context: the ISI has a close relationship with Western intelligence agencies, primarily those of Great Britain and the United States. The ISI has effectively acted as a conduit for Anglo-American intelligence operations in the region since the late 1970s, when the Afghan Mujahedeen were created in collusion with the CIA. Out of this collusion, lasting throughout the 1980s until the end of the Soviet-Afghan War in 1989, Al-Qaeda was created, as well as a series of other militant Islamic organizations. In 1992, with the start of the Bosnian War, Al-Qaeda-affiliated terrorists began operating with the ethnic Bosnian Muslim minority in fighting the Serbs. In turn, these Al-Qaeda affiliated groups were supported with training, arming, and finances by German, Turkish, Iranian and US intelligence agencies; with additional financial support from Saudi Arabia. In 1997, the Kosovo War began, in which the militant-terrorist-drug trafficking Kosovo Liberation Army (KLA) began fighting against Serbia, with training, arms and financial support from the US and other NATO countries. The CIA, German intelligence, the DIA, MI6 and British Special Forces (SAS) all provided training and support to the KLA. The LeT has a sordid history of involvement with Western intelligence agencies, primarily those of Great Britain. The LeT also has close ties with the Jemaah Islamiyyah (JI), an Indonesian terrorist organization, which was blamed for the 2002 Bali bombings, which also targeted tourists in Indonesia”. Unquote.

Therefore, to underestimate the potential of LeT for wreaking havoc in Pakistan would be extremely dangerous. Its wide network, international connections and experience make it an extremely formidable foe for India as well. It would be no exaggeration to state that as far as the challenge to the Pakistani state is concerned LeT is more dangerous than Al Qaeda or the Taliban owing to its reach deep into the Punjabi heartland. Increasingly the poorer sections of society in Punjab are more and more inclined to accept Sharia as the law of the land. They would always remain inimical to India, whereas Balochistan and Sind do not have the same animus toward India. Under pressure from many countries to come down hard on the Pakistan tanzeems and Mr. Imran Khan’s desire to do so the task is beyond the capability of the Pakistan Army even it was inclined to go along with the Prime Minister.

Pakistan Army showed that it was capable of dealing with the Taliban when they took over the Swat Valley and the strong hold that the tanzeems had on the tribal areas in FATA. The Pakistan military machine was able to clear the militants from Swat and over a period of time return it to normalcy. It was successful in the tribal areas bordering Afghanistan as well after suffering heavy casualties. The fact is that in these areas it used the full power of its arsenal in the same way as it would an external foe. It used heavy artillery, helicopter gunships, F-16s and several divisions without let or hindrance before it could declare the area under control. It took a long time to do so. Hostile elements that fled across the border to Afghanistan continue to be a thorn in its flesh. The opponents it was fighting and had fought earlier in Sind, Balochistan and elsewhere were away from the heartland Punjab from where the bulk of the army is recruited.

Fighting the home-grown tanzeems located in Punjab is an altogether different kettle of fish. There would be no question of using the type of heavy weapons, helicopter gunships and aircraft in the province without tearing Pakistan apart. Even if it obliged to undertake the task, success would unlikely to be within its reach. Fighting in built up areas of cities like Lahore, Bhawalpur and others, literally hand-to- hand and from house-to-house would be exceedingly difficult. The heart of the uniformed men would also not be in it. Nor have they fought under these conditions before. Many of the fighters from the other side are from the same families. The challenges are enormous. Besides, how does the army plan to handle suicide bombers that have played havoc in Kabul, Ghazni, Kandahar, Mazar–e Sharif and other towns. Neither the Afghan Army nor its ally the US Army, even when its strength was near one hundred thousand, had found a way to meet this challenge.

Prime Minister Imran Khan might be sincere in wishing to rid Pakistan of the tanzeems that played equal havoc in Pakistan resulting in several thousand casualties within the country over the years. On earlier occasions Prime Ministers who wished to bring the tanzeems under control were thwarted by the Pakistan ISI, tacitly backed by GHQ Pakistan in Rawalpindi. The situation in 2019 is far more serious. The Army and its Inter Services Intelligence have to come on the same page as the Prime Minister. Together they have to reverse the sinister design to bring the tanzeems into the political arena. At a later stage, once India is convinced about the sincerity there is a lot that it can do to help Pakistan. As Mr. Modi and Prime Minister Khan have been saying their main enemy is poverty. Should they join hands both countries will prosper and the world will look at the subcontinent with a jaundiced eye.