IAF: Structuring the Right mix of Platforms and Technology

Sub Title : Advanced and disruptive technologies are competing for a place in the force structure to off-set the number of fighter platforms 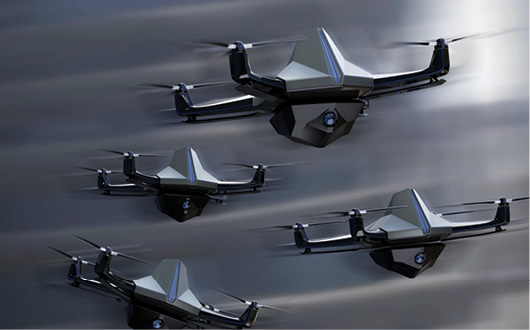 Advanced and disruptive technologies are competing for a place in the force structure to off-set the number of fighter platforms as they have the potential to revolutionise the battle space. We need to strike a balance and establish the right combination of platforms and technologies and revisit the force structure to objectively analyse the issue and work out the number of squadrons required. Will we still need 44?

Force structuring an air force is always a challenge for military planners as they must endeavour to build the right mix of capabilities to address the myriad challenges of a future battle space. The challenge gets further complicated by the prospect of the types and generations of platforms and technologies that can be inducted vis-à-vis the costs involved. These key elements of the structure are identified based on the strategic construct and operational concept for fighting a future war. Since force structuring gobbles up a major portion of the nation’s financial pie, it is hotly contested and debated within the Government, armed forces and the media.  The debate is usually on how many platforms or squadrons would be adequate to meet the security challenge of the future.

Way back in the mid – 60s, the TATA Committee had recommended a 64 Squadron air force for the nation. The threat then was rather benign and technology in its beginnings. The GoI sanctioned a force of 39.5 fighter squadrons which remained unchanged till the IAF presented Vision 2020 in Sep 2000 recommending 55 Squadrons. The Government then cleared a force structure of 42-45 Squadrons to be raised by the end of Thirteenth Plan period i.e. 2027. The IAF has a strength of 30 Squadrons as of today and hopes for 42 Squadrons by 2027 and 45 by 2032 when it will complete a century. However, given the fact that the Government has always sanctioned less than what was desired it is ambiguous whether 45 Squadrons will meet the requirements of a two-front war. China has since emerged as a formidable adversary, given its concept of fighting an informationized war with 5th Generation manned and unmanned platforms, networked advanced technologies in the backdrop of a cyber war. IAF’s structure will be compelled to follow fifth generation contours to contest the war on equal footing if not better.

Calculating force-level requirements isn’t easy. It requires to meticulously work out the number of units of force resources in terms of fighter squadrons, after a full target selection along both fronts, and an in-depth evaluation/analysis based on the operational concept, for an over-the-target (OTR) weapon requirement calculations.  The OTR calculations entail working out the number of weapons that must fall on the target to achieve its desired degradation and then apply probability factors to determine the number of weapons that must be carried by the number of aircraft to achieve the desired result.  The aircraft requirement, then gets translated in capability terms to arrive at the number of squadrons of each type i.e. Ground Attack, Air Superiority fighter, Multi-role, Electronic warfare, Reconnaissance etc to be inducted.  The IAF vision 2020 document had envisaged 16 Multirole Squadrons, 18 Strike Squadrons, 16 Air Defence and a few for Reconnaissance and Electronic warfare in its aggregate of 55.

Using another method of war gaming, to derive a force-on-force attrition, in the likely scenarios and threats of a two front war, Group Captain  Vivek Kapoor, a research fellow with the Institute of Defence Studies, arrived at a 53 -63  squadron force, in his article titled “IAF Equipment and Force Structure Requirements to Meet External Threats, 2032” published in 2014. He recommended a 53-squadron force with fifth generation, 4.5 generation and fourth generation fighters or a 63-squadron force in case the mix was of 4.5 generation or below.

The IAF is at a 30 Squadron force level comprising of 4th generation platforms or below.  While it hopes to build to 45 squadrons, the force mix would remain that of 4.5 generation or below. Adequacy of such a force structure to adequately mitigate future threat needs to be established in light of what is stated above. The fundamental question which emerges is what capabilities are essential for the future and how much of each must be inducted to structure our air force. The picture is blurred both in terms of platforms and technologies and there is a need to review the force structure and say present a vision 2050. Advanced 5th generation platforms and technologies have changed air warfare, making it more efficient, effective and truly smart.  The IAF does not have 5th generation technologies in its midst. The new construct must endeavour for the same by either examining the basis of our current force planning and factor the changes based on our national military strategy or start with the current and future threats and work out a force required to mitigate the same. Unarguably, a trade-off between fighter aircraft and advanced disruptive technologies which offer significant operational potential such as UCAVs, land-based cruise missiles, autonomous precision weapons, AI, cyber weapons and robotic autonomous weapon systems would need to be factored in to obtain a winning combination to remain within the budgetary constraints.

Our adversaries will contest in all warfighting domains: air, land, sea, space, and cyberspace. The key structural requirement for the IAF would be to integrate the cyber domain into a networked war fighting operational concept and combine kinetic and non-kinetic capabilities. Networked wars which link sensors, systems, weapon platforms and C2 centres for data flow create enhanced situational awareness and then bring to bear the most appropriate weapon on the target enhancing efficiency. Mesh networking and topology management has moved warfare from a platform-centric war to a networked war architecture for collective force application providing synergistic effects. Such synergies will bear on the force structuring numbers which will have to be arrived at. Likewise, intermeshing cyber offensive and defensive operations as part of IAF’s overall employment concept will entail autonomous cyber bombs to create disabling effect on enemy’s weapon systems reducing aircraft requirement over target. Such technologies will have to be developed in house and a balance between kinetic offensive force and non-kinetic elements will be required based on IAF’s operational concept and cyber capability that the nation can evolve.

In the IAFs operational concept, until the enemy’s Air Defence (AD) comprising high-powered radars and extended-range surface-to-air missiles is suppressed, manned platforms are escorted to avoid of attrition. Technology offers options of suppressing enemy AD using stealthy manned strike platforms or a combination of cyber operations, electronic warfare, and artificial intelligence or UCAVs to saturate or attack them. It will be for the planners to decide on the desired option as each would offer a different set of OTR calculations. While each option will need a target wise analysis, the cost of procurement or development of such technologies will need to be factored in the structuring matrix.

The Air Force will need a force structure incorporating weapons and systems to operate above the speed and beyond the range of its potential adversaries. Technologies, like hypersonic strike technology offer the potential to engage heavily-defended, and high-value targets. Hypersonic aircraft and weapons will have the capacity to fly at speeds greater than Mach 5, allowing them to quickly address threats before an adversary has time to react. This could be a game-changing capability with significant tactical and strategic advantages provided it can be developed inhouse within reasonable costs. Induction of such technology could considerably reduce the platform requirement

Force planners will need to look at the argument for replacement of fighter aircraft with cruise missiles for attack missions. In our context this could form part of the solution once India’s Nirbhay, long-range cruise missile, is inducted alongside Brahmos. A cost benefit analysis however, would be necessary since missiles offer only one-way travel at a certain price vis-à-vis re-useable aircraft that can deliver weapons with high accuracy. While a land cruise missile may seem lucrative in the initial stages but its exorbitant one-way cost may be unaffordable owing to larger circular error probability (CEP) and hence requirement of more missiles per target. India’s Prithvi missiles are claimed to have a CEP of 25 metres (m), while Agni-5 is claimed to have a CEP of 40 m. Fighter aircraft deliver CEPs consistently of under 10 m. Hence, our current ballistic missiles fall well short of being considered for possible replacements of fighter aircraft, though this could change in the future and will have to be factored-in accordingly.

UCAVs are emerging as a preferred option for high-risk, high payoff missions expanding the range of coercive or punitive methods that any air force could employ. Their role will keep increasing along with their capabilities. A quantum jump in their operational use however, is expected with a breakthrough in AI, when autonomous UCAVs make informed, intelligent decisions. Autonomous stealth UCAVs would be able to find and identify targets and strike in the autonomous mode or on obtaining permission from a human operator. Cheap swarms of autonomous stealth drones armed with weapons or EW/EO/IR payloads offer viable strike, EW and ISR solutions and to an extent relieve manned fighters of these tasks. Swarms could be flown to protect manned fighters from enemy air defences and thus alleviate the need for escorts. Whilst losing a UAV is still an expensive prospect, such combinations could be used in highly hostile environment/densely defended areas expanding IAFs ability to project force. Autonomous UCAVs though not a panacea, offer the presence of force in a threat environment that twenty years from now will be extremely lethal accruing immense operational and cost benefits. Their advantages, low costs and ability to carry out a variety of roles will be compelling for a significant number to be inducted in our force structure and in some cases in lieu of platforms.

Artificial intelligence (AI) and increased machine-based learning /reasoning will provide increased autonomy in the tactical, operational and strategic environments as it develops and matures. Artificially intelligent sensors, missiles (especially the fire-and-forget variety), UAVs and lethal autonomous weapons could be networked to populate the battlefield of the future. Operating in close collaboration with manned platforms with varying degrees of autonomy these highly automated robotic machines would be able to identify and attack targets automatically through pattern-recognition algorithms. Research in microwave and laser-directed energy systems will pursue offensive and defensive weapons engaging at the speed of light. Other disruptive technologies competing for a place in the force structure to off-set the number of squadrons would be in the form of smart munitions, quantum technology and robotics. Incorporation of these technologies will require a cost benefit analysis for induction into the force structure.

Force structuring an air force requires the right mix of platforms and technologies to mitigate the threats of a future war. Advanced and disruptive technologies in the form of smart munitions, quantum technology, AI, Autonomous UCAVs, cruise missile and robotics are competing for a place in the force structure to off-set the number of fighter platforms as they have the potential to revolutionise the battle space by changing warfare concepts and offer low cost options. Our planners will have to find a balance in induction of technology and platforms based on our concept of fighting the future war. Since vision 2020 will soon lose its applicability and the Government has sanctioned a structure well below its recommended / desired figure, IAF needs to rework on its force structure and articulate vision 2050. They must strive to establish the right combination of platforms and technologies to get greater effects, speed and reach than our adversaries. In employing advanced 5th generation technologies and platform combinations, the air force would have to create a new strategic concept on how it intends to operate them to counter threats of the two-front war. Technology will play a significant role in deciding the force planning numbers as it brings alternate means and alternate concepts to war fighting. These will have to be adequately conceived at the planning stage itself to structure a winning combination.